The stage was set for the penultimate 5* class at the Longines Global Champions Tour of London, with the crowd eager to catch the last glimpses of the best horse and rider combinations in the world. With the iconic venue of the Royal Hospital Chelsea providing the ultimate backdrop, spectators were treated to a thrilling speed class in the CSI5* Total Waste Management Table A against the clock standing at 1.45m.

With thrilling rounds scattered throughout the starting order, Ioli Mytilineou aboard Casanova Hastak DWB continued their form and successfully challenged fellow clear round competitors with a time of 60.43, Edwina Tops Alexander (AUS) aboard Cantenda posting a time of 69.15 and Omer Karaevli (TUR) aboard Policeman 2 with a time of 61.53.

With 26 leading riders and entries into the second-last 5* class for the LGCT London competition saw an impressive line-up of riders take to the arena. Angelical Augustsson Zanotelli looked to replicate her stellar day one performance, with the course ultimately being two fences too long with the pair incurring two late rails resulting in 8 faults.

Michael Duffy aboard the extravagant 10 year old Surprise put on a show incurring an unfortunate single rail. British young-gun Lilly Attwood aboard Calvaros Up To Date was quick to follow, started strong and looked to impress in front of a home crowd, but had an unlucky four faults jumping into the delicate combination, resulting in keeping 5th position warm and ultimately finishing in 11th place.

Mike Kawaki of Japan aboard his Tygo bred bay mare, Kahlua, gave the first double combination in front of the VIP a little rub, continuing his clear round, but with an unfortunately four faults late in the class saw him finish down the leader board in 12th position.

It wasn’t the day for Sanne Thijssen and For President with a miscommunication into the big rainbow oxer incurring a refusal and four faults had the duo finishing with a time of 93.32 and 26 penalties consisting of 2 rails and a number of time penalties. Home grown hero Scott Brash opted for a cruisy round aboard Hello Senator posting a picture perfect clear round with a time of 69.80 seconds and landing a 7th place finish, 12.48 seconds behind the ultimate winner.

With just six to go, popular German duo Gerrit Nieberg and Amigo's round was smooth sailing, soaring into the lead with a time of 59.12 seconds to the delight of the crowd. The final collection of riders had spectators guessing on the final result up until the very last rider.

Giles Thomas and Feromas van Beek Z took two seconds off Nieberg’s time, allowing him lead of the class for less than a minute. With a skilful, quick and tight round he left the arena with almost two seconds in hand. Next in saw the second Greek rider for the class, and uber stylish Athina Onassis her mount Constantin 110 cutting some brilliant angles and inside turns left the duo finishing in 7th place with a time of 70.16 seconds.

Guy Williams (GBR) aboard Rogue de Ravel entered the arena with the weight of a nation on his shoulders as the last of the British riders. With an early four faults he opted to save his usually ultra-competitive teammate for another day.

Michael G Duffy next entered the arena, with just three left to go, the biggest risk to Thomas’ lead was to come. Borelli T an athletic Bay gelding by Balous Bellini who has proved to be on excellent form on London turf, started the Longines Global Champions Tour in London with 4th position on day one has a brilliant long stride but was no match for Giles Thomas leading round, finishing on a time of 57.40 – just 800th of a second behind the leading combination and ultimately claiming second position on the podium.

Giles Thomas offered commentary after his round, suggesting he had planned to ride a quiet smooth class, as his beautiful black stallion was going to be started in the next class. As he entered the arena it was clear there were few clean rounds and he decided to ride for the win – and how glad we bet he was! 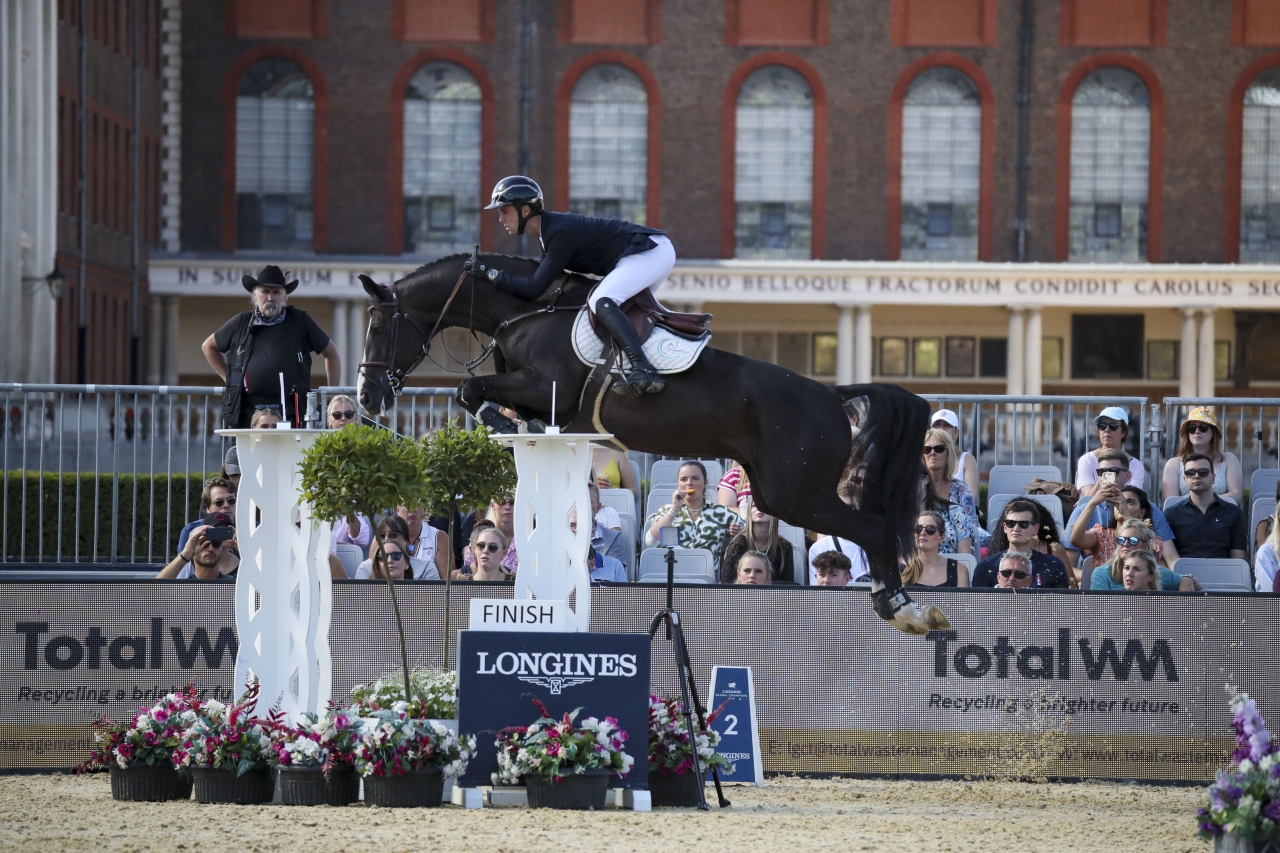