It was not only a victory but also a coveted golden ticket to the LGCT Super Grand Prix for Ludger Beerbaum and the striking grey mare Mila in the first Longines Global Champions Tour Grand Prix of the year. Under the lights in the stunning Longines Arena at Al Shaqab, H.E Sheikh Joaan bin Hamad bin Khalifa Al Thani presented the trophies in front of a full house and standing ovation.

Beerbaum beat one of the most famous horse and rider combinations at the moment, Henrik von Eckermann and King Edward by over half a second with his clever jump-off. Jur Vrieling picked up third place on the podium with his consistent grey Long John Silver in the most electric competition of 2022.

A very emotional Beerbaum explained: “I have had a few wins in my career but this one is probably one of the most emotional ones and also not really expected one. I cannot tell you how much I enjoy this moment. That was definitely our best jump-off ever. I am so happy, I still can’t really believe what happened. It is because of a lot of reasons that this is extra special. Of course it’s about the horse, it’s about our performance but honestly, I did not expect to be here on the podium. Long story short believe me when I woke up this morning I did not expect to win this Grand Prix and I am very very very happy. ”

In the press conference, Henrik von Eckermann said: “When you sit on a horse like this you just have to focus on your riding and do the best in the round and normally it’s a clear round with him. So it’s an unbelievable feeling to sit on a horse like this. When I went into the jump-off I thought ok don’t overdo it, stay a little bit easy and that’s what happens when you don’t take the risk - you don’t win.”

Jur Vierling praised his horse: “I am really happy because the horse is not the most experienced. He was unbelievable today. It has all come together, with the passing away of the wife from our sponsor, everything has come a little bit together and it makes me a bit emotional and really proud.”

LGCT and GCL Founder and President Jan Tops said: “I have known Ludger for many many decades. It is amazing to see at his age how he still has the finesse to win against the best in the world. He always was and he proves again that he can still do it. It is an amazing achievement, especially with the horse not having so much experience at this kind of tracks.”

Omar Al Mannai, Event Director, spoke of the spectacular sport saying: “Everyone has experienced top sport this evening, we have seen a fantastic start to the season. It has proved the Longines Global Champions Tour Championship race will be tough for all riders this year.”

With just 8 combinations managing to keep all the fences up in round 1 of Uliano Vezzani’s 1.60m course, it proved to be tricky but fair track making the jump-off intense, fast and dramatic. 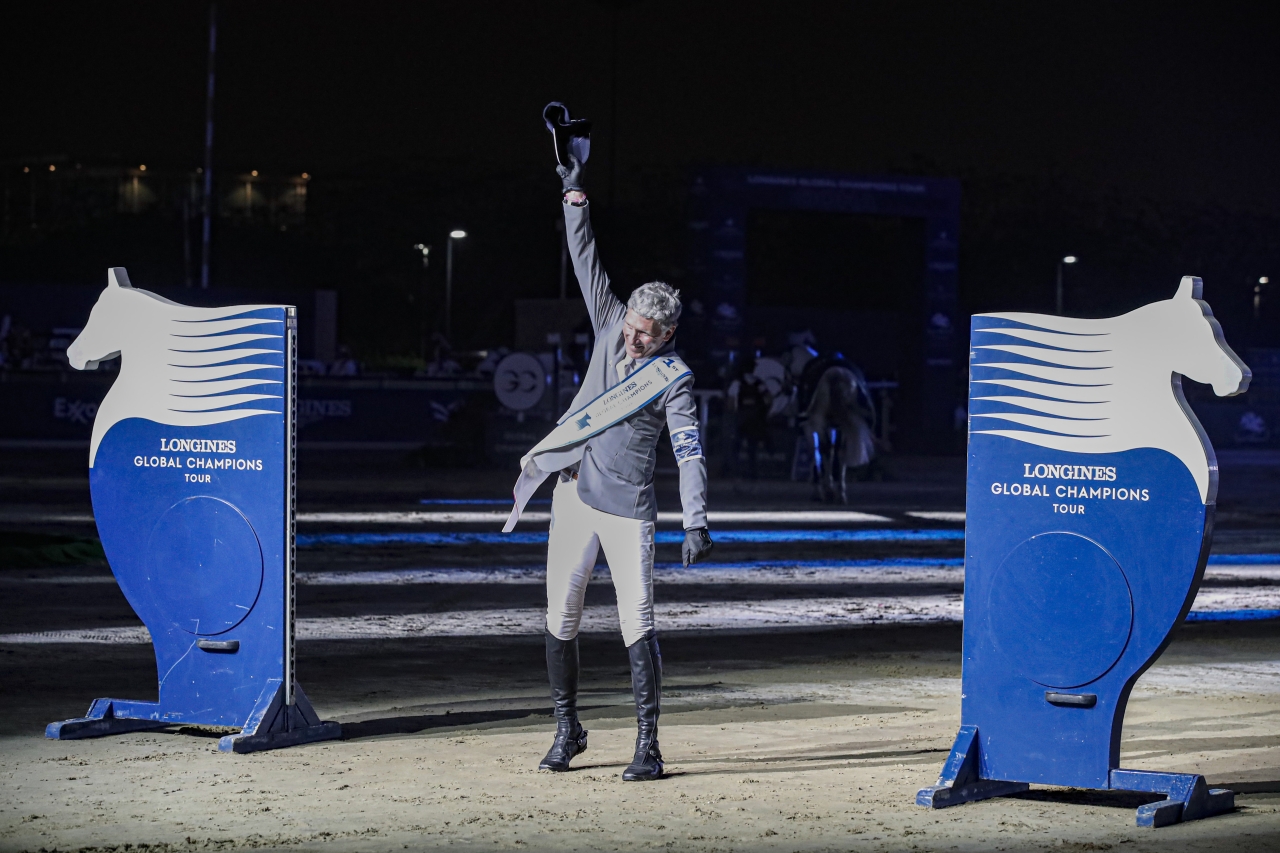 First to earn their place in the jump-off was young Irishman Michael Pender with HHS Calais. Knowing he had the best combinations in the world to come after him, Pender gave it everything he had from the get-go. It was a gutting 4 faults for the talented pair as the wide Global Champions oxer right by the in-gate came crashing down but he posted a fast time of 37.01 seconds.

Opting for a slightly slower route, Pieter Devos and Mom's Toupie de la Roque came home on a clear but over three seconds slower than Pender leaving it wide open for the rest of the field. His tactic paid off as many riders felt the pressure and had faults leaving his solid double clear suitable to pick up 4th place overall.

Christian Ahlmann would have won it after posting the fastest time of the day with 35.18 seconds on Dominator 2000 Z but the gappy Al Shaqab wall tumbled down adding 4 faults to their tally.

It wasn’t to be for Max Kühner and Elektric Blue P after they had the same fence down as Pender as he risked it all taking a stride out. Irishman Michael Duffy also got caught out as he stopped the clock with three down and at the bottom of the leaderboard on Zilton Sl Z.

Jur Vrieling and Long John Silver banked on a steadier clear to place themselves on the podium as they kept it smooth and tight but spent lots of time in the air meaning they had to settle for third place.

The last appearance on the tour for Henrik von Eckermann and King Edward saw them win the LGCT Super Grand Prix in style. Today von Eckermann wanted to secure his golden ticket to take the pressure off for the rest of the season. Although he produced a flawless double clear which looked fast he only stayed in the lead for a short while.

It was a perfect ending to a sensational weekend of world-class sport, as last to go Ludger Beerbaum and Mila pulled out all the stops. The pair played the game with precision and power as they took the tightest of turns in the rollback and jumped the penultimate fence on the sharpest of angles shaving off the all-important milliseconds and securing the win today under the lights in Doha.

The Championship race now heads to the famous LGCT Miami Beach from 12 - 14 April to see if Beerbaum can continue his successful campaign and find out who will be the next winner of the prestigious golden ticket for the LGCT Super Grand Prix at the GC Prague Playoffs in November.