In a thrilling display of horsemanship and elite sport, Daniel Deusser aboard Scuderia 1918 Tobago Z have been crowned winners of the coveted 2022 €1.25 million Longines Global Champions Tour Super Grand Prix Champion in front of a sell out crowd at the GC Prague Playoffs.

The German champion declared the evening of top sport ‘unbelievable’ explaining: “I am speechless. What Jan Tops created here in the last couple of years is what I call an unique event and to jump here in an arena like that and a crowd like that is unreal.”

Take thirteen of the world’s top horse and rider combinations, set them against each other and watch the exhilarating display of world class show jumping unfold. With Prague’s O2 arena providing the ultimate venue for the fourth edition of the GC Prague Playoffs, a full house resulted in electric atmosphere with tension that could be cut with a knife.

Showing her pure class Katrin Eckermann secured silver with 9-year-old Cala Mandina as the only other double clear, and Olympic Champion Mclain Ward for USA rounded off the podium onboard HH Azur after an excruciating single time fault in round 1.

An emotional Mclain Ward commented on his equine partner and the expectation he had for the standard of sport at the GC Prague Playoffs: “Out of respect for the level that was going to be at this competition I chose to bring the best horses I have, and HH Azur is really something now later in her career – I am really blessed that she is still competing at this level and she is a spectacular partner for me.”

He added on his impression of the event: “The environment is spectacular, the crowd is spectacular, I noticed them on the podium. The horses feel it, the riders feel them and it is just spectacular sport.”

Founder and President of Longines Global Champions Tour Jan Tops smiled: “I’m very proud what has happened in the last few years, especially the formula in the Super Grand Prix, that really works. You see that this is an amazing, popular class. Highest level of show jumping you can see at night, full house. Our social media and TV is full speed around the world and it's for me an honour to work with a comity like Jan Anderlik and all his team around to make this really special effort and what has been delivered the last week. We started the journey together four years ago, it was unheard of. I have been to every show around in the last 35 years, a show like that you don’t see. From A to Z it’s perfect, and the greatest sport it is. And I’m really proud.”

Event director Jan Anderlik added: “We are extremely happy to see such a crowd in this arena. As you can see we were very close to completely sold out. It’s amazing, we had almost 11,000 people in the house tonight. So it is just showing how attractive and popular the sport is and it’s all thanks to the Global Champions.” 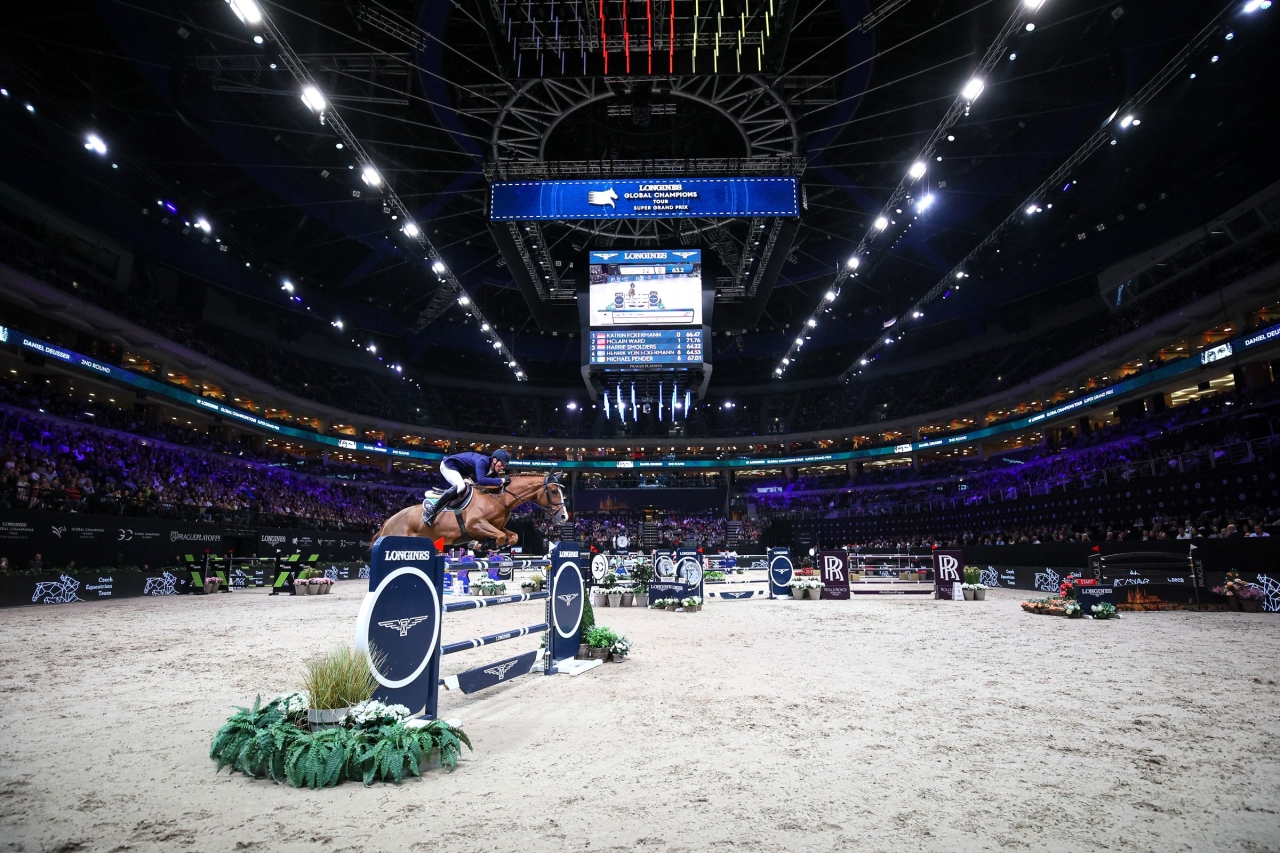 As pathfinder, winner of the LGCT Grand Prix of Valkenswaard and Riyadh, U25 star Michael Pender aboard his HHS Calais tackled the big and technical course by Uliano Vezzani in impressive form, collecting an unlucky four faults.

Second to start saw Harrie Smolders aboard his on-form Monaco N.O.P paving the way with the first clear round of the night proving the course challenging yet rideable and securing their faultless position heading into round two.

In a script that couldn’t have been written better, two out of the first three to go posted faultless rounds. Third to go saw Christian Ahlmann aboard Mandoto van de Neerheide produce a textbook round, followed by an out of kilter Marlon Modolo Zanotelli aboard VDL Edgar M with an uncharacteristic 9 faults added to their scorecard.

Fifth to enter the impressive O2 arena in Prague saw Max Kuhner aboard Eic Coriolis Isles produce a brilliant clear round, but a tight time allowed saw a single time fault against their name. Daniel Deusser and his pocket rocket Scuderia 1918 Tobago Z who made up for what he lacks in height with his heart of a lion produced the third clear round of the night.

Current World Number One Henrik von Eckermann aboard his World Championship winning mount shocked the crowd with an uncharacteristic rail down at the penultimate fence. Next saw America’s Mclain Ward aboard his HH Azur as the second rider of the evening to collect a single time fault.

Collecting 8 faults was Christian Kukuk aboard his 9-year-old Nice vant Zorgvilt put them down the list of returning riders into the second round. A roar from the crowd saw Pieter Devos aboard Mom’s Toupie de la Roque jump an impressive fast and clear round under the watchful eye of his GCL Prague Lions team mates, securing the fourth clear of the evening.

LGCT Grand Prix of Madrid winner, Sanne Thijssen and her Con Quidam RB fell short in tonight’s LGCT Super Grand Prix after an unlucky rail at fence number one, followed by an uncharacteristic circle coupled with a number of time faults and additional rail.

As second last to go in round one, Irishman Denis Lynch and Brooklyn Heights faulted at the final two fences, finishing with a score of 8 faults. As excitement built in the crowd for the impending second round, last to go saw Katrin Eckermann and Cala Mandina take the total of clear rounds taken to 5, with Pieter Devos’ fastest clear of the evening seeing him heading into round 2 in pole position as last to go. The 13 challengers who took centre stage are winners of each LGCT Grand Prix during the 2022 season or runners up if the winner was already qualified for the GC Playoffs, with two non-starters in Malin Baryard-Johnsson withdrawing due to a small injury to her H&M Indiana, and podium veteran Ludger Beerbaum choosing to shift his focus towards Sunday’s GCL Super Cup Final by not starting his multi Grand Prix winning mount Mila and save her for the GCL Super Cup Final representing his team, the Berlin Eagles.

Round 2 saw an all thirteen riders return to the arena to face an imposing course under the bright lights of Prague’s O2 arena. A thrilling display of top sport saw the crowd lift the roof with their cheers, celebrating some of the world’s best horse and rider combinations and their blistering times in Round 2.

Courage, skill and determination from riders delivered two double clear rounds for the evening. Rails fell for Michael Pender, Christian Kukuk, Max Kuhner, Henrik Von Eckermann and Christian Ahlmann leaving room for the remaining 6 riders with rails in hand as they took on the challenging course.

Putting the pressure on for Round 1’s faultless athletes was Mclain Ward and HH Azur – a horse who had not jumped a single indoor competition in over three years, as they jumped the first clear of the second round, adding zero penalties to the single time fault accumulated in Round 1.

Enter: Katrin Eckermann. A Longines Global Champions Tour podium veteran, having earned her place on the podium in 4 out of the 6 LGCT Grand Prix’s she has competed in – an impressive clear put her straight into the lead, with all to play for, for the following four riders.

Christian Ahlmann and Harrie Smolders quickly followed as favourites to win the coveted title of the LGCT Super Grand Prix for 2022. Uncharacteristic rails accumulated by both riders put them straight off the podium meaning Katrin was guaranteed her place.

Deusser, the eventual champion entered the arena with just one fellow competitor to follow as the electric atmosphere reached fever pitch. A blistering clear in a time of 65.22 seconds put him firmly in the lead with Pieter Devos and his Mom’s Toupie de la Roque to go.

In a time that would have firmly secured him the win, Devos fell short with a single rail at the ultra-delicate plank in front of the packed VIP viewing platform, resulting in Deusser being crowned Champion of the Longines Global Champions Tour Super Grand Prix at the 2022 Prague Playoffs.

A worthy tribute was paid to the grooms of the LGCT Super Grand Prix place getters, Sean Lynch, Yifat Givre and Virgine Catserman, with a gift and trophy awarded to them as they attended awards ceremony with the impressive equine athletes followed by a rousing lap of honour under the eyes of an impressed Prague crowd.

With day three of the GC Prague Playoffs coming to a close, all eyes now look ahead to the final day of thrilling sport and spectating, to the GCL Super Cup presented by Air Bank.