In a script worthy of the Broadway stage, the Championship battles are at an electrifying stage in the penultimate points-scoring round of the season.

Round 1 of the GCL of New York was dominated by a cool, calm and collected Madrid in Motion. As class pathfinders, the impressive duo of Maikel Van Der Vleuten and Angelica Augusstsson Zanotelli took to the arena providing a masterclass and posting two clear rounds, giving false impressions to those that followed that it was an easy feat.

Heading into the arena confident in their plan, and pleased with the final result, Van Der Vleuten commented on the team’s strategy, “We came up with a good plan after we walked the course. Both horses jumped really well. We rode good as we have planned before. It was a great start to the GCL of New York.”

Mikael added: “I think it’s incredible to jump in a location like this. There are many great riders and horses over here, so I think we are going to see some great sport tomorrow. We are all looking forward to it.”

The testing course left riders battling it out for a clear round, with just three teams ultimately posting double clear rounds. Augusstsson Zanotelli of Madrid in Motion commented on the challenges faced by an impressive field of riders in today’s class – “I think it was a delicate course, and faults came everywhere. It was a nice build, I also think that the circumstances with the wind and everything doesn’t help. Horses maybe get a little more tense than normal.”

With free entry for the public, coupled with cool change in weather at the impressive venue, New Yorkers and travelling spectators alike enjoyed an afternoon of world-class sport in the city that never sleeps. Governors Island, in the heart of New York Harbour, positions the unique arena for the penultimate stage of the season in prime position, with the picturesque backdrops of the Lower Manhattan skyline and The Statue of Liberty.

Proving what a high-class pool of talent was fielded for round one, 16 of the 32 riders have all stood on the podium once already this year. The intense Championship battle between Stockholm Hearts powered by H&M We Love Horses and the Berlin Eagles powered by Fundis reached new a new height of drama in today’s round one.

Two rails fell for Stockholm Hearts, Lillie Keenan with Agana van het Gerendal Z but Peder Fredricson and H&M Christian K produced a classy clear round to keep them on a score of 8 and ease the pressure on Berlin Eagles. Until the penultimate fence fell for Eoin McMahon and Chakra putting the team on 4 faults. Philipp Weishaupt and Coby then played it safe taking all the outside lines to keep it a clean sheet and mean they sit one fence ahead of their rivals tomorrow.

With just two points between the impressive season leaders, the Berlin Eagles and ever reliable second place holders, the Stokholm Hearts, the two teams are set to go head-to-head tomorrow, the deciding round in New York.

It wasn’t to be for Istanbul Sultans who found the course designer Uliano Vezzani especially challenging, ultimately finishing on 24 faults. While in contrast 2021 season Champions Valkenswaard United veterans Marcus Ehning on Priam du Roset and John Whitaker with Equine America Unick du Francport sit in second place overnight showing the crowd how it’s done with two top clear rounds putting them in prime position for round 2 of the GCL battle.
Miami Celtics head into round two with one of their lowest scores of the season. A faultless score form Bertram Allen and Emmylou coupled with just a single rail from U25 rider Edouard Schmitz and Gamin van't Naastveldhof the team sit in fourth place overnight just ahead of the Eagles on a faster time.

The third and final double clear of the day came from last to go Prague Lions as Pieter Devos and Niels Bruynseels made light work of the course onboard Nascar van 't Siamshof and Matador.

As the GCL battle reaches an electrifying stage in the series, New York offers the second to last chance for teams to add points to their leaderboard positions. Can the Berlin Eagles hold on to their late-stage leadership takeover or will the Stockholm Hearts turn it out tomorrow? 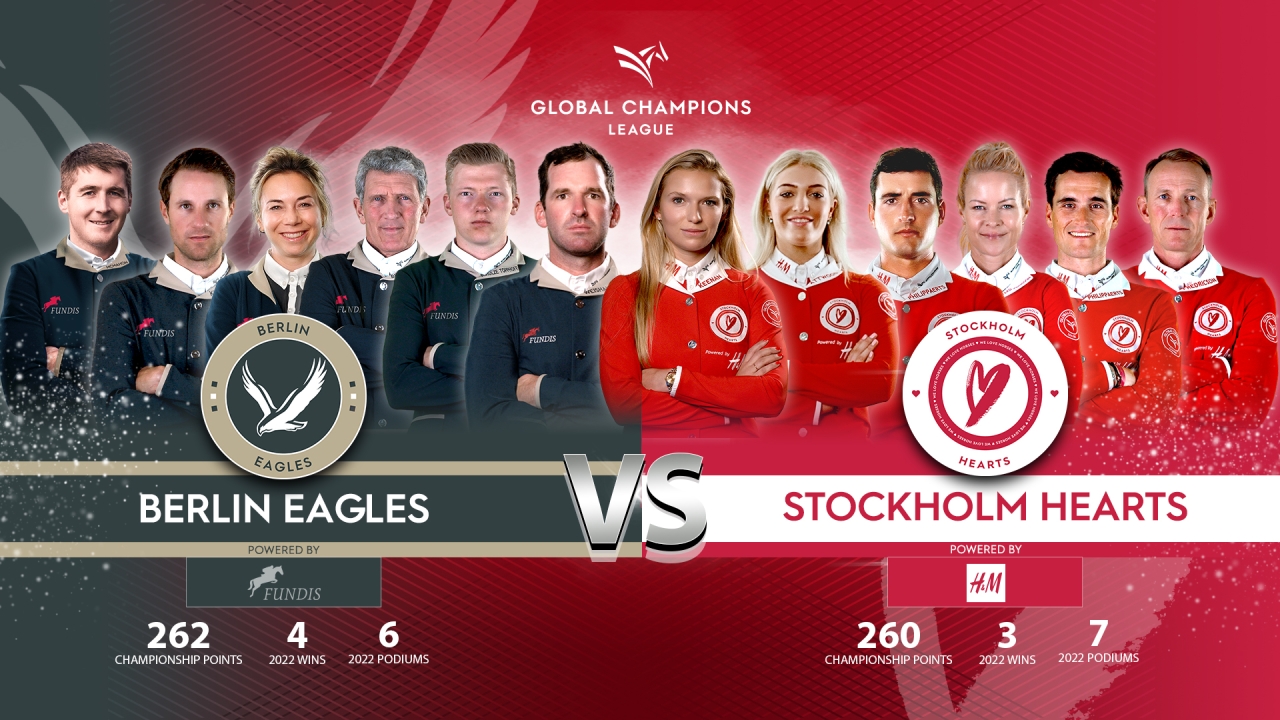