It was emotional scenes as the sun set behind the Eiffel Tower when Marlon Módolo Zanotelli and Like A Diamond van het Schaeck were given a standing ovation as he celebrated a breathtaking victory in the Longines Global Champions Tour Grand Prix of Paris.

After being close so many times he finally secured a LGCT Grand Prix win triumphing against 7 world class riders in an electrifying jump-off on the spectacular stage of the Champs de Mars at the Longines Global Champions Tour - Longines Paris Eiffel Jumping.

Marlon is now the 9th rider to qualify for the LGCT Super Grand Prix at the GC Prague Playoffs in November joining an incredible start list after just beating 20 year old Lily Attwood on Cor-Leon vd Vlierbeek Z. The final spot on the podium today was taken by Lillie Keenan in her first ever 5* Grand Prix with Queensland E.

Speechless and crying after his win Marlon said: “It’s so hard to describe these emotions. First of all, the crowd here has been amazing and what a weekend we have had with so many people coming to watch our sport. My mare has been amazing all weekend and I have to thank the owners, the family Gjelsten that are here for giving me the chance to ride her and keep her in this beautiful sport. This is definitely a special moment. Amazing to be in the LGCT Super Grand Prix, I have done it one time before and it is just fantastic sport there and to be in between those kind of elite riders is something very special.”

The result of today’s showdown meant Christian Ahlmann extends his lead in the overall ranking to 210 points with Ben Maher’s phenomenal form securing him second on 182 points. Pieter Devos stays in third with 139 points and young gun Gilles Thomas just behind with 136 points.

The LGCT Grand Prix of Paris played out on one of the most iconic and dramatic stages for show jumping and the competition was as hot as the temperature. Stunning aerial images beamed around the world showed incredible views of the Eiffel Tower and the City of Lights as top sport got underway in the French capital.

The 9th leg of the LGCT championship was a stunner as the 1.60m LGCT Grand Prix was watched by passionate crowds who filled the grandstands along with international guests enjoying fine dining in the chic hospitality lounge. 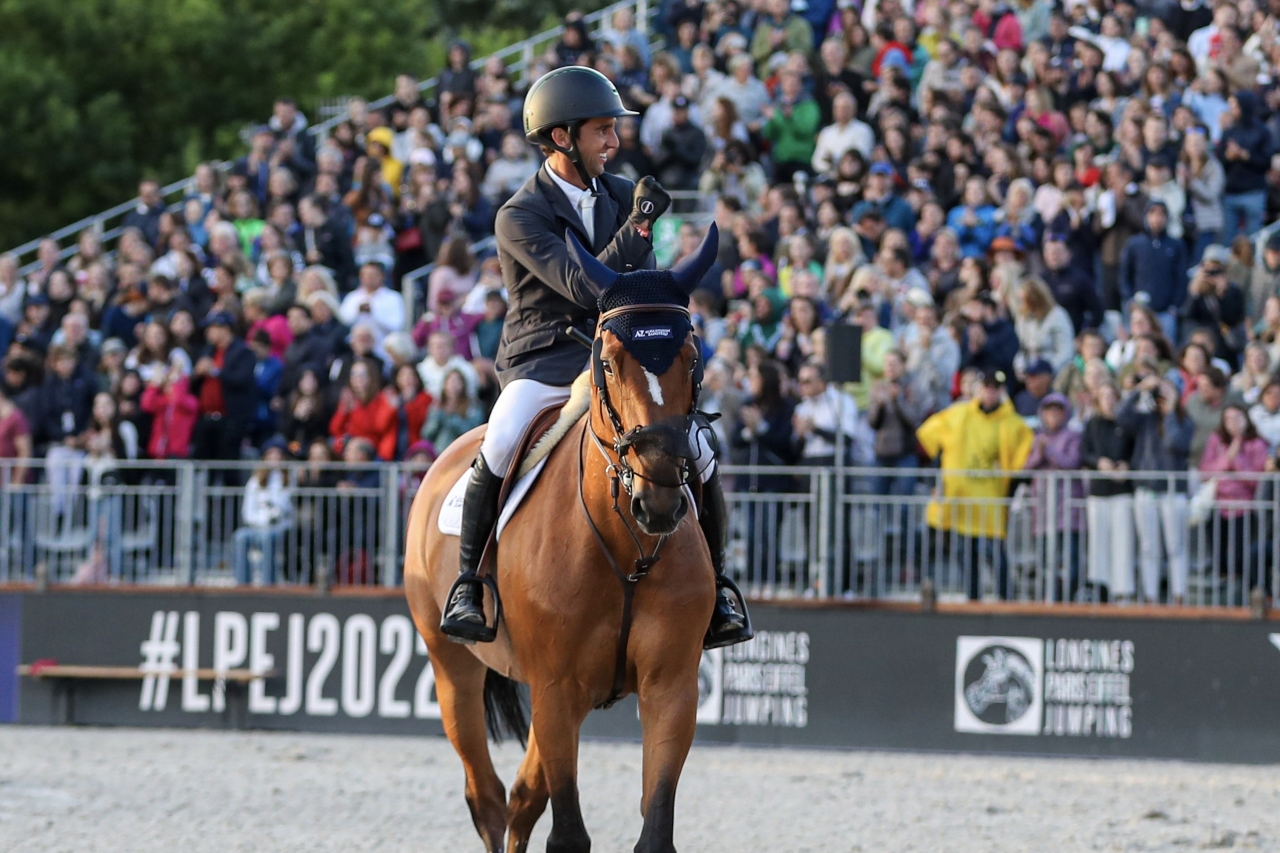 In the first round, 35 starters faced a formidable technical course designed by Gregory Bodo and the tight time allowed added extra pressure.

The starting grid for the phenomenal jump-off was a mixture of experience and young female talent as all 7 combinations gave it their all.

First in the ring for the jump-off, Geir Gulliksen and his grey stallion Equine America Grandino H tore around the course from the word go. Geir pumped the air as he finished clear in 41.81s, throwing down the gauntlet to the rest of the pack.

Show jumping legend John Whitaker and Equine America Unick du Francport galloped around the course clearly faster than Geir but the Longines double fell and he had to settle for 4 faults in 38.93s. The only hope for France in the jump-off Olivier Robert was looking for his 3rd LGCT Grand Prix win but one down with Vivaldi des Meneaux put them out of podium contention.

Dutchman Eric van der Vleuten was clear in 39.53s after he pulled off a super tight turn after the double combination to the last but he wasn’t in the lead for long as Lillie Keenan stepped up her game and showed everyone how it was done, clear in a faster time of 39.13s with new ride and previous LGCT Grand Prix winner Queensland E.

Young female talent shone through under the Eiffel tower as British rider Lily Attwood produced her best career performance yet. The 20 year old made it look easy onboard Cor-Leon vd Vlierbeek Z to fly into the lead a second and a half faster than her Stockholm Hearts teammate Keenan in 37.55s.

But it was last to go Marlon Módolo Zanotelli and Like A Diamond van het Schaeck who stole the hearts of every single person watching the magic unfold. There were tears as he stopped the clock in 36.07s displaying the highest level of show jumping and achieving what he has worked so hard for.