Under the iconic Eiffel Tower, the Istanbul Sultans put in their strongest result of the season so far in a thrilling first round of GCL Paris presented by La Mairie du 7ème. Despite being one of the first teams out of the gate Andre Americo De Miranda and Ömer Karaevli pulled out all the stops to shoot the team to the top of the leaderboard and into prime position to finish the job tomorrow.

In an edge-of-the-seat first round that saw no double clears, Sultans took pole position ahead of home team Paris Panthers and Berlin Eagles powered by Fundis, the only three teams on 4 penalties in today’s class.

Set in the shadow of the Eiffel Tower, today marked the 9th round of action in the nail-biting 2022 Championship. Following the transfer window, team managers carefully selected their strikers for the first round of action in Paris, knowing a good result today will help set up teams for their chance of a maximum points haul tomorrow. With the first 10 teams, all within four faults of each other, Saturday's GCL Paris second round is set to be a tantalising showdown in one of the most stunning destinations on the tour.

Karaevli explained to GCTV: “This show is amazing, with the crowd and the location and its beautiful arena - it is amazing to ride here. It feels great I must say, we are only halfway there, it is still a long way to go but it feels very nice. I didn’t expect that we would still win with one down. I had a little bit unlucky down but I must say Andre had a very good round and I had a very good time so luckily we are still in the lead and still in the game.”

Gregory Bodo put together a long and galloping track in the square sand arena, with the Eiffel Tower as the picturesque backdrop. Spectators and VIPs including Susan Brown, Estelle Lefebure and Miss France 2015, Camille Cerf, took in sumptuous views of the Eiffel Tower, as the sun shone down on the first day of competition in the French capital city.

First to go, U25 rider Mike Kawai of London Knights had an early rail with Goldwin and there was further disappointment for the team after Tobias Meyer and All I Need - H picked up 9 faults proving it was a technical course and a tight time allowed. The team sit on a score of 15 ahead of Saturday’s second round and way off the mark to be in with a chance of a podium. 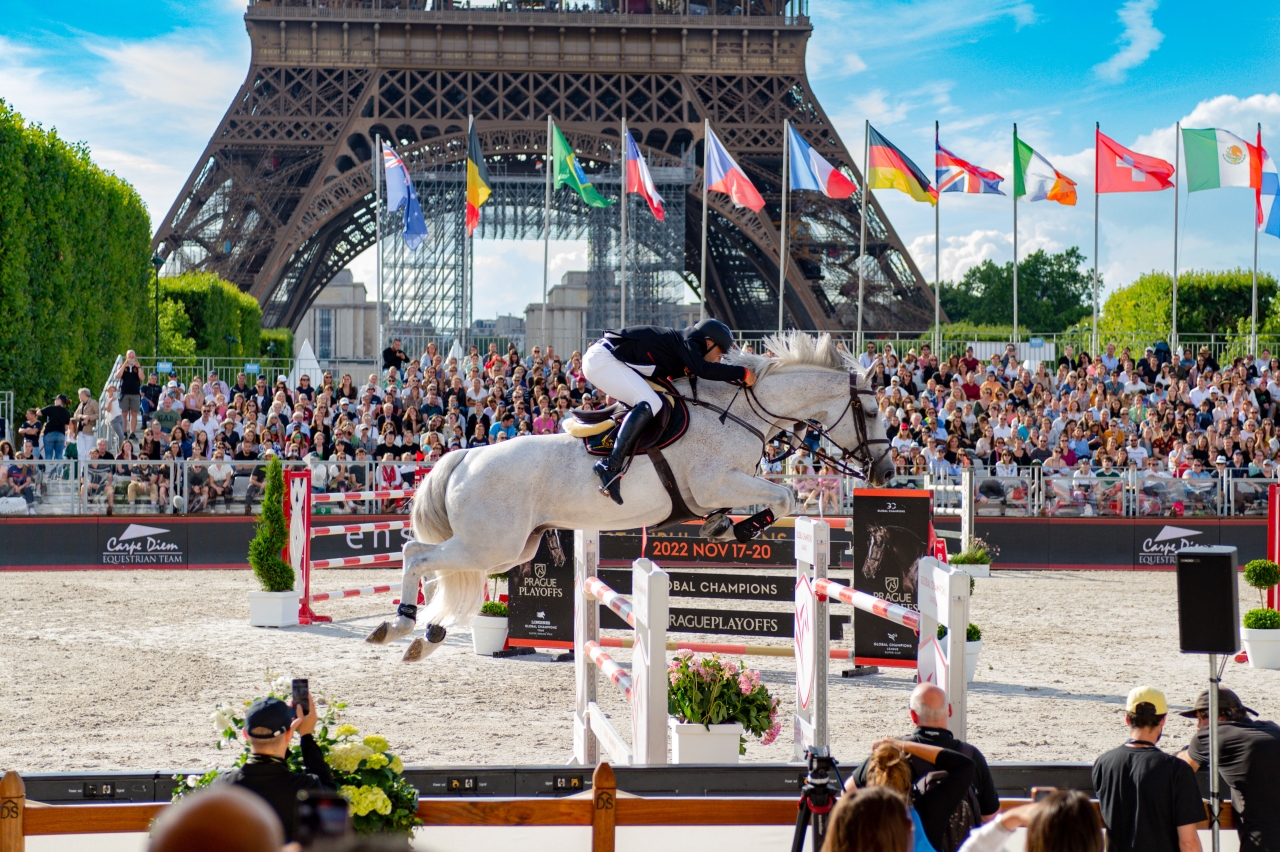 Fresh from their home last weekend in Stockholm, league leaders Stockholm Hearts were looking to ride the crest of the wave of success today putting forward Lily Attwood with Calvaro's Up to Date first. The young British talent stopped the clock with 4 faults on the scoreboard but there was drama when Lilile Keenan and her new ride Queensland dropped the team to a total of 12 faults and out the top 10.

Speaking after her round, Lillie explained their strategy: “I went 2nd, Lily went first - she actually had a super round just an unlucky one down. With my horse, we’re a brand new partnership I’m actually really happy because I think I learnt something, it’s unfortunate for the team that I couldn’t keep my 100% statistic but I think for tomorrow we’re going to be stronger and better for it.”

Talking about the location Keenan said: “Paris is one of the most beautiful destinations on the Global Tour but one of the most challenging because it's a very narrow arena and the jumps are very big so I just had a little bit of difficulty with the rideability in the turn but I’m confident that we can fix it for tomorrow.”

Making his debut for the Istanbul Sultans in the Parisian leg for the Championship Andre Americo De Miranda and 9 year old Hilfinger van de Zuuthoeve leaped powerfully around the course. They produced the goods, finishing clear and handing the baton to teammate Ömer Karaevli and Cheston de la Pomme d'Or Z, a formidable line-up for the Sultans. Omer guided his top grey gelding beautifully around the arena, giving the scopey horse plenty of space and it looked like they too pulled out a clear until the final fence came crashing down but an extremely fast time sent them to the top of the leaderboard.

Ömer said after his round: “I must say it's a difficult arena, there is a quite strong slope and very spooky with the corners. It's our best result of the season in the first round and we already said to ourselves we really want to go for a few podium finishes in the second half of the season and maybe this is the first one but we want to win - for sure we are hungry.”

There was drama from Cannes Stars, after eight faults from Sameh El Dahan with WKD Toronto and Isabella Russekoff kept all the fences up which not many had achieved but the slow and steady approach put 4 time faults on the board and meant the team would tumble down the leaderboard and out of the competition for the rest of the weekend.

Berlin Eagles started their charge back up the overall rankings, after consistent Christian Kukuk with Cemal produced a spectacular clear and Eoin McMahon on Chakra collected a single rail in a fast time putting them at the sharp end of the gird.

Home city favourites, the Paris Panthers picked up an agonising four faults after Gregory Wathelet and Ace of Hearts clipped the rail. A brilliant clear from teammate Ben Maher and Faltic HB meant the team would stay within a pole’s reach of a podium on Saturday, with a strong result crucial for their season campaign.

New signing, Edouard Schmitz of the Miami Celtics made his debut for the team, bringing out Gamin van't Naastveldhof and they set a blistering time to come home with just a single rail down. Teammate Jessica Springsteen wanted a repeat of her win with the Celtics in Paris in 2019 and set the pedal to the metal onboard RMF Zecilie. They too had an unlucky pole but the team finished as one of the fastest on 8 faults just behind Hamburg Giants.

So it would be a successful day for the Sultans, with the team looking to stay on top tomorrow and start their charge to the Finals and GC Prague Playoffs. The action kicks off at 15:20 local time via GCTV, with the Longines Global Champions Tour Grand Prix of Paris at 19:15.