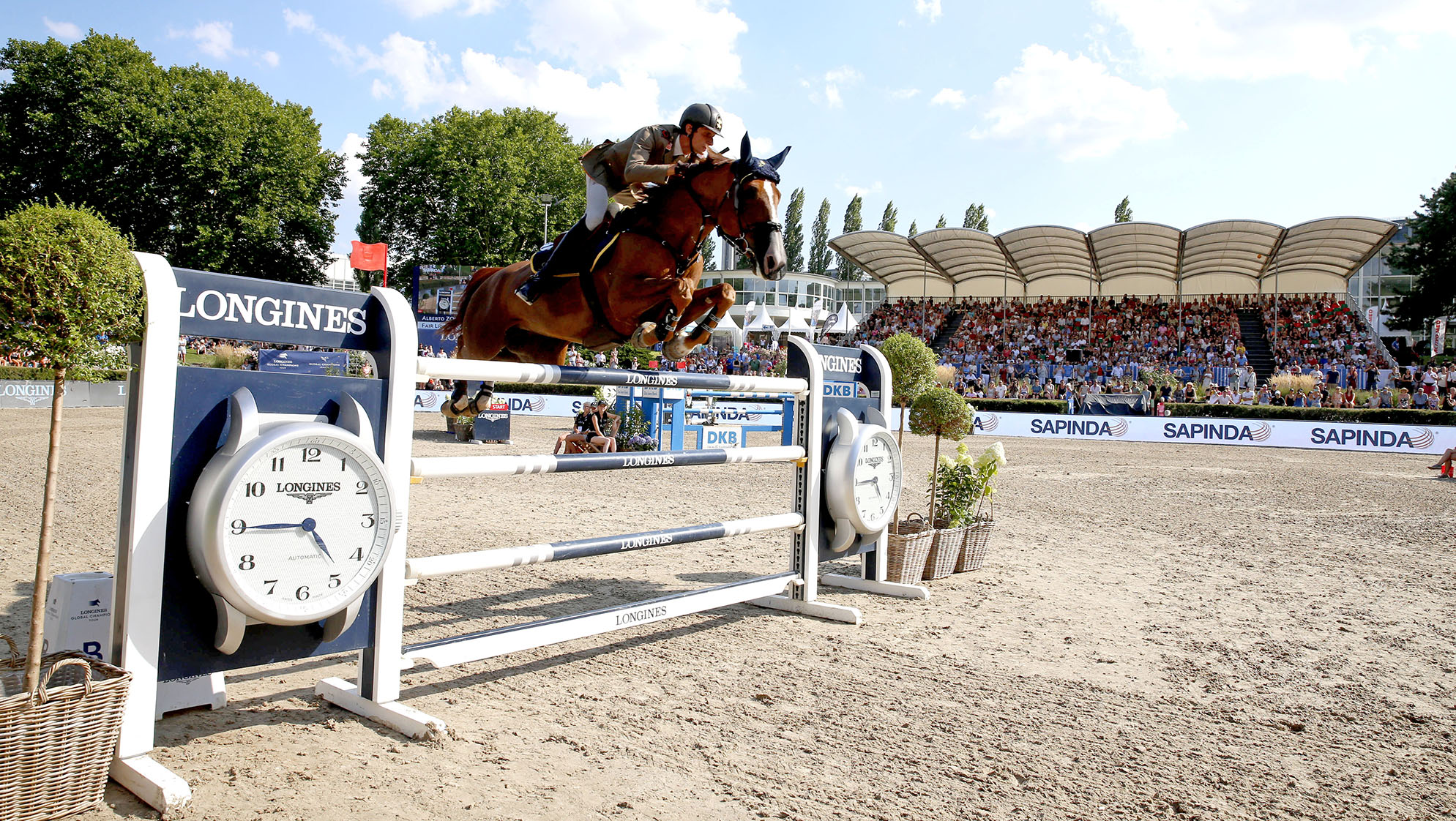 Alberto Zorzi (ITA) blazed his way to victory in Berlin beating off a ferocious challenge from home star Christian Ahlmann (GER) in a heavyweight jump off.

Zorzi has become the 12th rider to join the star-studded line up of qualifiers for the Longines Global Champions Tour Super Grand Prix at the first-ever GC Playoffs in Prague in December.

In the steamy heat of the German capital, as Europe’s prolonged heatwave continued, the event was a sell-out as crowds filled the grandstands and grass banks ringing the natural amphitheatre of Berlin’s Sommergarten.

Overall LGCT ranking leader Ben Maher should have been on the starting grid for the Longines Global Champions Tour Grand Prix of Berlin Presented by Sapinda. But after a travel nightmare with cancelled and delayed flights due to storms in England, he just missed the qualifier class by a whisker. Ben is still in the lead on 237 points but Harrie Smolders (215 points) and Edwina Tops-Alexander (212 points) are breathing down his neck: “I did my best to get here. We have London next week which is our home show and my horse has had a nice holiday in Berlin. I am lucky to be in a good position but others are very close now.”

German course designer Frank Rothenberger put together a big and delicate but fair course, featuring wide oxers that needed plenty of power interjected with light verticals requiring absolute control and precision in the smaller oval arena. A solid wall, with the Brandenberg Gate emblazoned across the facade, caused a couple of horses to have a look, and a wavy Sapinda vertical placed just by the in-gate asked for full focus. Fences came up thick and fast, and other challenges included a wide DKB oxer with a water tray underneath, a long Longines treble and a delicate GC gate to finish with in the 77-seconds time allowed.

There was disappointment for home hero Ludger Beerbaum (GER) with Casello, the pair clipping a vertical to collect four faults and rule them out of contention for a win today. Other top riders tried, and failed, to take on the course, with riders such as Simon Delestre (FRA), Lorenzo de Luca (ITA), Sheikh Ali Bin Khalid Al Thani (QAT), Harrie Smolders (NED), and Edwina Tops-Alexander (AUS) all picking up faults today.

First to deliver a clear was Belgium's Niels Bruynseels (BEL) and Cas de Liberte - the pair taking the course effortlessly in their stride. But there was heartbreak for compatriot Constant Van Paesschen (BEL) and the 9 year old stallion Jilbert van' T Ruytershof, the pair jumping beautifully but picking up a single time fault.

Spectators' hopes of a home win rose after Daniel Deusser (GER) delivered a spell-binding round with Calisto Blue, fans cheering ecstatically as the duo flew through the finish gates clear to create a jump-off. They were joined by Alberto Zorzi (ITA), riding Fair Light van T Heike, who said he was fired up for a clear after disappointment in the earlier GCL class.

Niels Bruynseels (BEL) was the first of eight combinations in the jump off going clear with a time of 39.10s which was clearly not going to be fast enough. Daniel Deusser (GER) went clear with Calisto Blue but was slower still in 41.04s.

The temperature rose dramatically as Alberto Zorzi (ITA) and Fairlight blasted into the arena. Alberto really challenged his horse and Fairlight responded enthusiastically. Taking one stride less at a couple of fences and then accelerating to the final the pair crossed the line in a stunning 35.53s and looked unbeatable.

Pieter Devos (BEL) made a big effort to catch Alberto but finished in 37.96.

A brilliant round by Christian Ahlmann (GER) and Clintrexo Z was actually ahead of Alberto at several points on the course but the German champion lost his stirrup in the run to the last fence and a wide turn left him on 36.65s.

So it would be a win for the Italian rider, his first so far this season, as he adds his name to the list of stars lining up for the LGCT Super Grand Prix.

Jan Tops, Founder and President Longines Global Champions Tour: “Our course designer Frank [Rothenberger] has done a fantastic job - it’s not easy at this top level, with such good riders and horses and with this arena. Alberto had his day today - he went for it and went everywhere for the first distance. He had a good shot at the last fence and got away with it - he was hard to beat today. And I know he’s very happy to qualify for the Super Grand Prix. Ben unfortunately couldn’t take part today, but he’s still at the top of the leaderboard. He still deserves to be the leader of the ranking - we have four more rounds, and he has some competition but he should do well.”

Volker Wulff, Event Director: “The sport was amazing. It was a great jump-off. We had 8 riders out of 33 in the jump-off which is about 25% which is exactly what we want. The arena was bigger and we increased the number of seats in the stand. We had between five and six thousand spectators, and were sold out three days ago. It has everything we could expect in our positive dreams.”

Ben Maher, overall LGCT Ranking leader: “As Jan said I had a few travel problems between yesterday and this morning to get here. But London is next week - it’s our home show and maybe things are done for a reason! My horse has had a nice holiday in Berlin, he’s going to travel home after some nice German sunshine and feel good for our home show next week. I’m very happy with the way the season has gone so far and it was an unfortunate situation with the flight, but I’m lucky to be in a good position.”

Pieter Devos, third place: “I knew Alberto would go on six - I planned to do it, but when she landed she felt a bit [flat] and I didn’t see the distance so I went for seven. I knew he would be difficult to beat, and I have a relatively young horse. I did what I could but it wasn’t fast enough!"

Christian Ahlmann, second place: “I really happy with [my horse] - he gets better at every show. In this jump-off I knew Alberto was quick, so I just tried to do my best. My horse did really well, he fought for me. To the last fence I lost my stirrup so I had to do one extra. Perhaps I had the possibility to win, but anyway I’m super, super happy with my horse and I didn’t expect second today. So I’m happy!"

Alberto Zorzi, first place: “Jan told me that after the double I should go straight away for the six strides - and I did it! I tried hard today and took the first distances. I came a little close to the first oxer but Fair Light helped me out. She is an amazing horse, she’s had a few weeks to relax and now came here very good. The last few weeks have been good for me. I’m so excited to qualify for the Super Grand Prix in Prague."