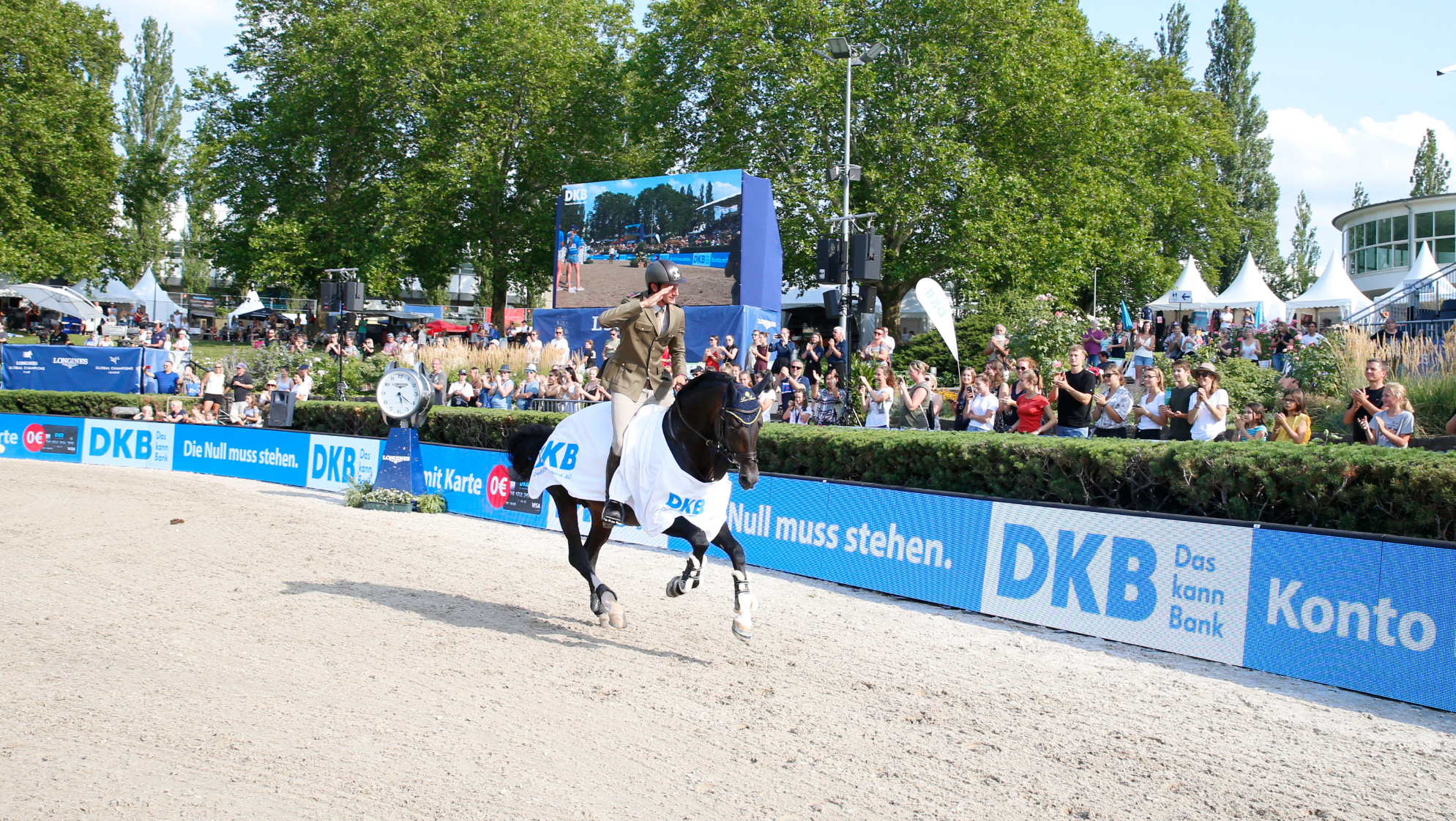 It was an exhilarating climax to three days of world class sport as Alberto Zorzi (ITA) and the dramatic stallion Cinsey rode to a blistering victory in today’s final class at the LGCT of Berlin.

Zorzi was the last to go in the 10-strong jump off of the 1.50m DKB Championship competition and stopped the clock almost a full second faster than nearest rival Christian Kukuk (GER) with speed demon Kent Farrington (USA) finishing third on Jasper. William Whitaker (GBR) came in fourth and the fifth place double clear was delivered by Jennifer Gates (USA) riding Monaco watched by her delighted parents Bill and Melinda and her sister Phoebe.

Winning rider Zorzi, who was victor in the LGCT Grand Prix in Berlin last year has ended a first place drought with today’s win and he said: “I am so happy. I was lucky that I was the last one to go. I saw the other riders. I started from one to two with 10 [strides] and the others started with nine, but in the end I was a bit faster. For five months I haven’t won much and today I am proud of my horse and everything went well. These five months were hard, but now we start again hopefully.”

Ten riders progressed from the first round into the jump-off from the 29 starters over yet another intricate, perplexing and fascinating track designed by Frank Rothenberger, where the triple combination proved very influential. This was the second biggest class of the event and the tall, delicate fences came up quickly in the unique egg-shaped Sommergarten arena. The 77 seconds time allowed proved challenging, and riders knew they had to keep the pace up when they saw Pius Schwizer (SUI) and Living The Dream finishing with one agonising time penalty in the first round. The jump-off asked further questions of horse and rider, with some daring inside lines possible, and an inviting gallop to the last, a wide oxer.

In the second round home rider Daniel Deusser (GER) was the pathfinder, and his mount, the striking Cornet, kicked out athletically behind to keep the fences up. But they came unstuck at the yellow vertical, with the Idee Kaffee upright falling shortly afterwards too. They finished on 8 faults in 41.74 seconds. Niels Bruynseels (BEL) was next in on the large-framed bay Kopernic van Orti. They pulled off a very tight roll-back after the double, but once again the dark coloured Idee Kaffee vertical fell and the pair broke the beam in 44 seconds exactly, with 4 faults on the board.

The second German rider, Christian Ahlmann - winner of this class for the past two years - brought his home-bred eight-year-old black stallion Zampano Z - the youngest horse in the jump-off. It was the tricky yellow vertical with the water tray below that caught them out when the horse touched the top pole with his hind fetlocks and it fell. They slid into second place in 44.39 seconds.

American Kent Farrington was the first to try a sharp angle over fence one, the wall. He kept the roll-back lines tight and the speed up as the athletic Jasper recorded a clear in 41.53 seconds and took the lead.

Germany’s Christian Kukuk immediately responded with his own fast clear on the stunning grey Colestus. They angled the Idee Kaffee vertical so boldly that the horse ended up jumping over the top of the wing. They took over the lead by the slimmest of margins, recording 41.39 seconds on the clock. It might have been a little faster if Kukuk hadn’t lost his left stirrup at the end of the course.

The current series leader Pieter Devos (BEL) and the flashy chestnut mare Jade v. Bisschop bravely took out a stride early on, yet they were another pair to lower the yellow vertical mid-way through the course. They finished in 40.15 seconds, fast but with 4 faults.  William Whitaker (GBR) jumped a steadier clear on RMF Chacco Top, judging the challenging course beautifully for his horse’s frame of mind, showing smooth gear changes and obedient turns. They were almost a second slower, on 42.32. Belgian rider Cindy van der Straten only rode her first international with Urban de Rohan in January, but the pair have gelled. After a steady start, a double touch lowered the second part of the double. They remained on 4 faults in 46.69 seconds.

Jennifer Gates (USA) clearly had a plan with Monaco. She did not ride at breakneck speed, instead choosing to give the horse a confidence-building steady clear. Those tactics paid off with a clear round in 47.08 seconds and a really good experience for Monaco landing them in fifth place as one of only five double clears on the day.

Last to jump was Italy’s Alberto Zorzi and the 12-year-old Cinsey, by Contendro, producing an absolute flyer of a round. They started a touch cautiously, but upped the revs with every stride and Cinsey responded to every question, using the horse’s nimble athleticism to full effect. They finished with a lightning fast sprint and a giant leap at the last to break the beam in 40.48 seconds and claim the victory.

The Longines Global Champions Tour and GCL team series now moves to the British capital London and the unique venue of Royal Hospital Chelsea for the 14th stage of the 2019 championship race from 2-4 August and all the action will be streamed live on GCTV.