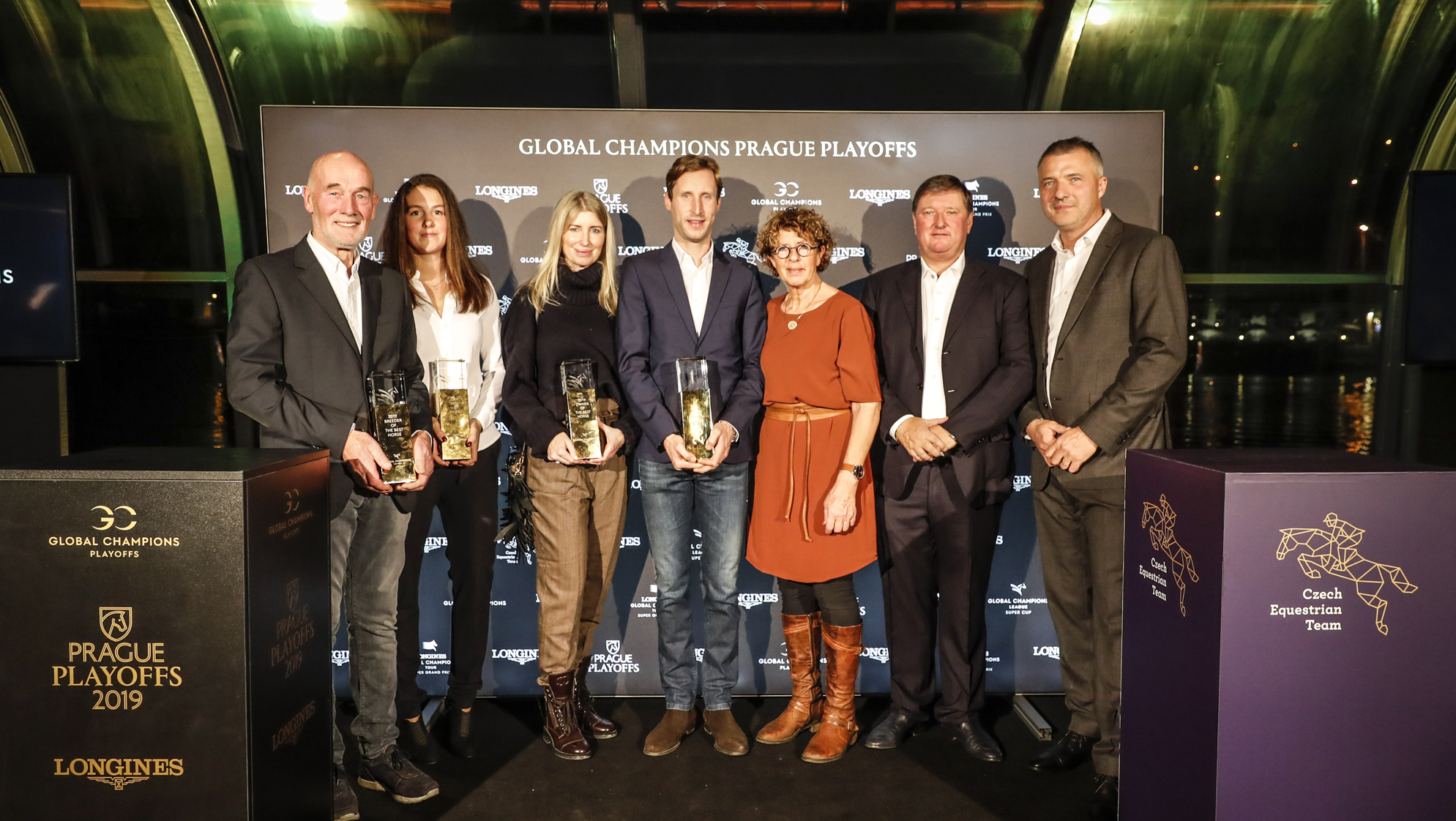 The first GCL Season Awards were celebrated tonight with a special ceremony in Prague recognising outstanding achievement in 2019.

With excitement building ahead of the kick off of the €12 million GC Prague Playoffs tomorrow, the Awards ceremony took place during an evening cruise along the historic City’s Vltava River with magnificent views of the ancient Castle.

International guests joined a star-studded gathering of the world’s best riders to applaud the four winners as they received their beautifully designed trophies.

2019 saw the most competitive GCL Championship since the innovative team series was launched. With top riders from different countries teaming up in the unique format, it was all about tactical planning and horsepower. As the season unfolded, teams with the most strength and depth reigned supreme in the season-long contest across 18 events leading up to this weekend’s GCL Super Cup Final.

The winners of the 2019 GCL Season Awards are as follows:

Category: Owner of the Best Horse

Explosion W is one of the true superstars on the equestrian stage today and the chestnut gelding is still only 10 years old. Poden Farms and the Moffitt family bought Explosion W for the London Knights team. Explosion W was pivotal in London Knights winning the GCL Team Championship this year by playing his part in 5 podium finishes and in Ben Maher’s victory in the Longines Global Champions Tour.

Receiving the Award Heidi Moffitt said: “Explosion is one of those special stories we are all happy to be part of and we are really fortunate to be part of his story. The GCT has always been a part giving us the platform to achieve what we have. And of course Ben (Maher) that goes without saying. And I have to say Emily, she is the reason we are in this sport and my husband, as some of you know, is an all in sort of person, a little intense and I wish he was here - it’s kind of his award. May the story continue.”

Category: Breeder of the Best Horse

Willy and Betsie Wijnen are recognised for the significant achievement of breeding one of the most phenomenally talented horses in modern show jumping. Explosion W’s intelligence, power and ability to excel in different arenas in the GCL this season has captivated the equestrian world. Explosion W is by Chacco-Blue and his dam’s sire is the famous stallion Baloubet Du Rouet.

Willy Wijnen spoke of his delight at the Breeder Award: “Thank you ladies and gentlemen I am very happy that Jan has invited me here for the Breeder Award. It is wonderful what Explosion is doing. Before I knew we had a good horse but Ben made the team, he made the team complete. Thank you and all the best for the future.”

At only 24 years old Kim proved her talent and composure competing on major international stages in the GCL this year with the Shanghai Swans team. GCL teams feature an U25 rider as part of the development of the next generation. Kim’s helped Shanghai Swans to a podium finish in Paris and to the team finishing 4th overall in the 2019 Championship.

Proudly holding her trophy on the stage Kim Emmen said: “I really want to thank everybody for the amazing season I had. I also want to thank Eric Berkhof who made it possible for me to ride.”

Pieter Devos has been one of the most prolific and consistent riders on the GCL circuit this season, competing in 29 out of 36 team competition rounds. Riding a number of different horses, he achieved 22 clear rounds out of 29. Pieter played a huge role in helping his team St Tropez Pirates finish a very close 2nd in the overall Championship.

Celebrating with his winner’s trophy Pieter Devos said: “I am very honoured to receive this Award. I can’t thank my horses enough for all they did for me this year. I am privileged to have such a super group of horses who do everything for me in the ring. I'd like to thank all the people behind the scenes, my family, my grooms, the owners who also deserve this Award. I want to thank Jan Tops and his team for creating such a great circuit in our sport and for creating such a great added value for our sport.”

A special presentation was also made to Anna Kellnerova, a rider with the Prague Lions home city team, for her work as an Ambassador for the GC Prague Playoffs event.

Presenting a special painting of the Prague Lions, which uses augmented reality to bring the team’s special moments to life, Jan Tops said: “I want to thank Anna Kellnerova for all the work she did as an Ambassador through the years to present our Playoffs in this magnificent city. All the events through the year lead to this fantastic weekend."

Tomorrow the GCL Super Cup Quarter Final will get underway at 20:00 with12 teams taking centre stage. All the action will be live streamed via www.gcglobalchampions.com