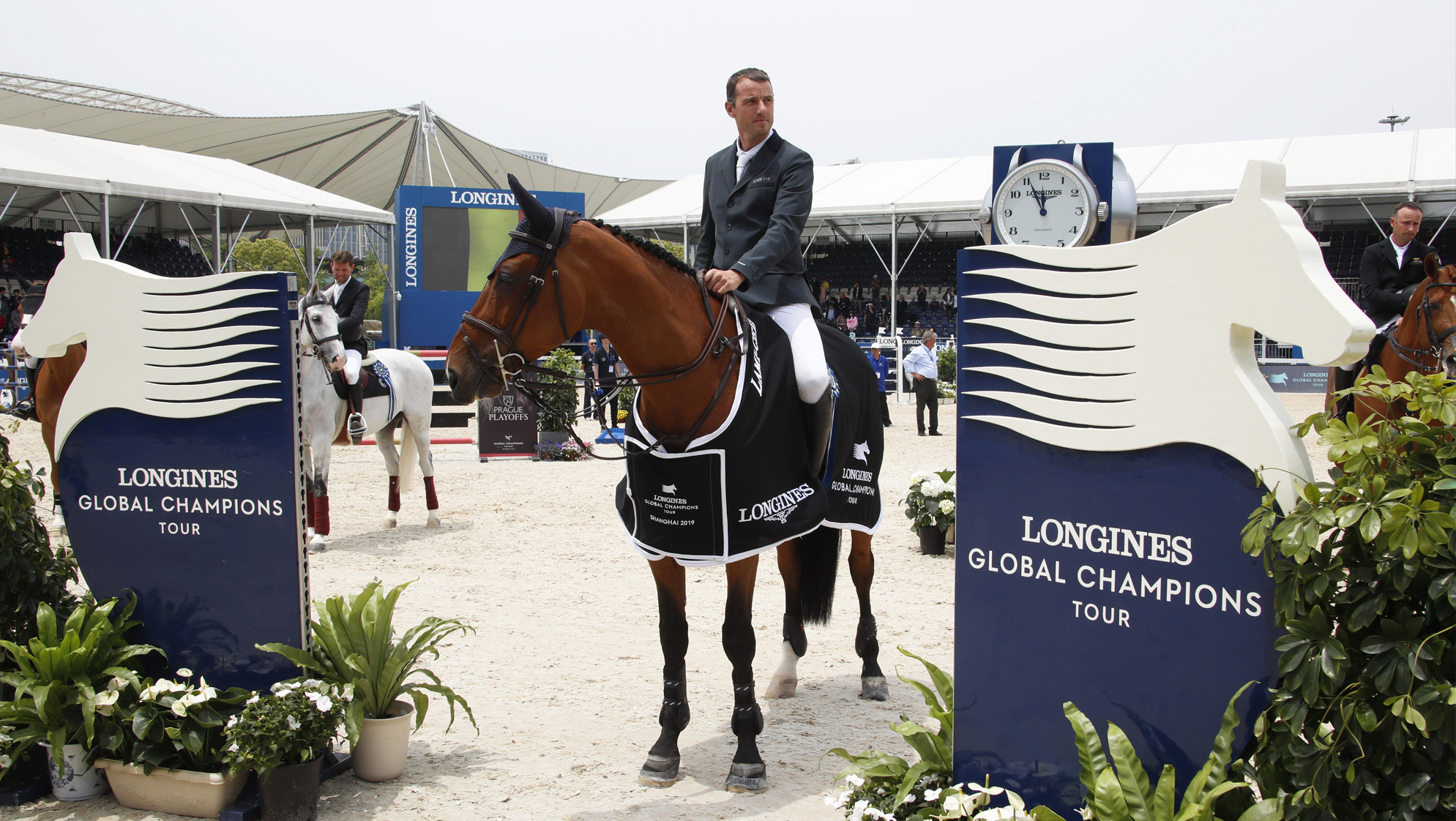 Gregory Wathelet (BEL) and Qualido 3 blazed to an nail-biting speed class win at the final day of Shanghai Longines Global Champions Tour in China. In the penultimate class of the weekend, the Belgian flew to the top of the leaderboard, just ahead of Pieter Devos (BEL) with Jade v. Bisschop and Simon Delestre (FRA) with Qopilot Batilly Z.

Speaking after his round, Gregory said: “It was a good feeling to win today. He’s a consistent horse, he’s always clear - so I’m really happy to ride him. So far Belgium are quite strong - it’s my first victory here, but I’m happy and for the Belgian riders I hope we’ll continue this way!”

37 starters took on Uliano Vezzani’s course which was a daring race around the square sand arena, with plenty of related distances but the opportunity for tight turns requiring plenty of bravery and trust between horse and rider.

First to light up the timing sheets was Constant van Paesschen (BEL) with the 10 year old chestnut stallion Verdi Treize, the Belgian talent powering around the course in a smooth and flowing rhythm to stop the clock in 60.57s. He was immediately followed by Bart Bles (NED) with Expert, but they couldn’t catch Constant, slipping in behind in 61.55s.

There was disappointment for the King of Speed Julien Epaillard and Usual Suspect d’Auge who took a flier to the first fence, but an early pole dropped them out of contention and the Frenchman retired to come back another day. Constant had piled the pressure on the field to come, with Christian Ahlmann (GER) and Atomic Z also cracking under the pressure as they pushed to better the Belgian’s time.

Simon Delestre (FRA) however is always a force to be reckoned with, and managed to shave 0.03 seconds off Constant’s time with Qopilot Batilly Z to set the new time to be at 60.28s. But it was short-lived after LGCT Ranking leader Pieter Devos (BEL) and Jade v. Bisschop manage to take off another half second from the leading time to stop the clocks in 59.70s.

But the pressure was too much for many of the international field, with disappointment for LGCT Grand Prix of Shanghai winner Danielle Goldstein (ISR), Roger-Yves Bost (FRA), Martin Fuchs (SUI), Alberto Zorzi (ITA), Scott Brash (GBR) and Philipp Weishaupt (GER) all falling short of a clear today.

Shane Breen (IRL) and the huge striding stallion Colmar looked a danger from the off, the Irish rider managing the enthusiastic grey horse beautifully. An edge-of-the-seat moment with a stride added at the last minute cost them, and they finished in 61.19s and slotted behind Constant.

Late in the order to go, Gregory Wathelet (BEL) and Qualido 3 looked a force to be reckoned with as they flew around the arena. The Belgian rider took every turn on the angle, shaving of milliseconds of time, with a gallop through the finish gates to squeeze just ahead of Pieter, finishing in 59.27s.

So it would be a win for Wathelet, with the next class - the conclusion of GCL Shanghai - kicking off at 13:15 local time (07:15 European time)