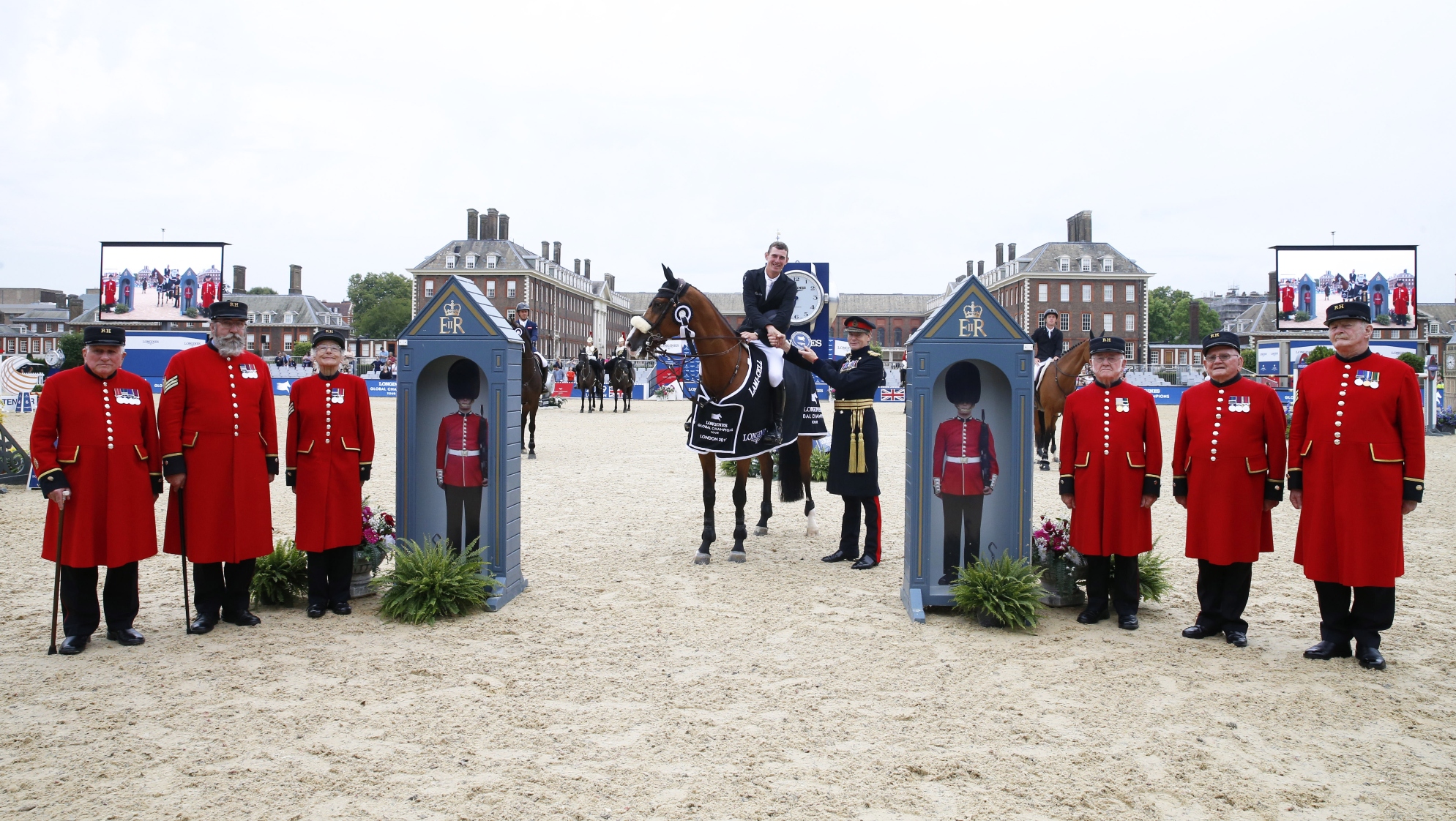 Despite the horse being in Verlooy’s stable for less than six months, the duo delivered a foot-perfect performance with a clear partnership forming - the horse and rider visibly in tune with each other as they beat the world class field of 40 international riders.

Great British tradition was on stunning display once again as the Household Cavalry and the scarlet-coated Chelsea Pensioners led out  by General Sir Adrian Bradshaw, Governor of Royal Hospital Chelsea who also presented the prizes today. Watched by international guests mounted soldiers from the Household Cavalry escorted winner Jos Verlooy and Jacobien Dwerse Hagen. Volunteers of LGCT London were gifted official certificates of appreciation, thanking them for their hard work during the spectacular event. Spectators enjoyed the shopping village and helped raise funds for the Chelsea Pensioners and the Brooke equine welfare charity throughout the weekend.

A delighted Jos said: “My mare is so fast, I need to think slower! She made my job easy today. It helps when it’s a good horse - we’ve followed her for a long time, and she’s had many clears - results don’t lie. My job is just to ride good, and give her victories. Everything’s coming together, it’s not even six months so to have a victory this early is great - it really helps the confidence.”

In a final Sunday showdown Verlooy took the win from Julien Epaillard (FRA) with Queeletta, with Eduardo Alvarez Aznar (ESP) rounding out third place aboard Seringat in a thrilling eleven rider jump-off.

International guests such as Bruce Springsteen and Chelsea footballer Olivier Giroud watched on from the beautifully designed VIP hospitality, as 40 international combinations came forward to tackle the tough and testing 1.55m course built by Alan Wade. With the colourful London fences spread around the square sand arena, the time allowed of 71 seconds played a big part in deciding who would make it through to contest for the win.

Pathfinder Cindy Van Der Straten (BEL) picked up eight faults on her 12 year old Catalina after getting a little too deep to the Longines oxer and Tennor plank.

The first combination through to the jump-off was German showjumping master Marcus Ehning (GER) and his flashy stallion Cornado NRW - the pair looking at complete ease in the London arena. Speaking after his round, Ehning said: "He felt really amazing today - I had a quiet week with him, and with this run I’m really happy. His quality is unreal. I’m first to go [in the jump-off], so we’ll have to see those behind me - I can [only] try to have a really nice round."

Eduardo Alvarez Aznar (ESP) and Seringat soon ensured fans would enjoy an electric jump-off, after their foot-perfect clear propelled them in with a chance of a win today. Home star Scott Brash (GBR) and Hello M’Lady were on top form as the pair worked like clockwork to produce the third clear round and earn themselves a spot in the final battle in Britain.

There was heartache for Simon Delestre (FRA) and Filou Carlo Zimequest as the first fence - a colourful London etched filler - fell. Alberto Zorzi (ITA) and Cornetto K looked to be reestablishing their strong partnership, leaving all the fences up but just out of the time allowed to rule them out of a chance to take victory today. It would be the same fate for Jessica Springsteen and RMF Swinny du Parc - they too picking up a costly time fault.

The troublesome first fence would also ruin the chances of Christian Kukuk (GER) with his 10 year old Quintino, while plenty of big names fell by the wayside in their bid for glory, including Eric Lamaze (CAN) with Firkov du Rouet, Olivier Philippaerts (BEL) with Cigaret JVH Z, Constant van Paesschen (BEL) with Vendetta Treize, Edwina Tops-Alexander (AUS) with Veronese Teamjoy and Harrie Smolders (NED) with Hocus Pocus de Muze.

The Tennor plank claimed both Robert and Michael Whitaker (GBR), and faults for William Funnell (GBR) with Billy Mccain and Emily Moffitt (GBR) with Tipsy du Terral meant British hopes were dashed as they were left out of a chance of a home win. There was further disappointment as yesterday’s LGCT Grand Prix of London winner, Ben Maher (GBR) collected an unusual 8 faults with F One USA.

So it would be an 11 rider jump-off, with every rider gunning for glory in the final day of action at LGCT London. Bloomberg gave an insight into her tactics for the jump-off: "I feel good, she’s not super fast, so we’ll be looking to leave out strides, stay smooth and clear.”

First to return was Ehning and Cornado NRW, and they set off at a flowing gallop, making a smooth, tight turn from fences one to two. A long gallop to the Tennor vertical caused them a lucky rub, but the following combination would tumble as they flattened off coming around the corner - Ehning shaking his head in disappointment as he finished.

Eduardo Alvarez Aznar (ESP) and Seringat approached the first fence on an angle, saving milliseconds. Taking every long stride, they too had a rub at the double combination, but left all the fences up to finish clear in 33.19s.

The crowd cheered as Brash and Hello M’Lady returned to the ring, the pair looking on form all weekend. They took a slower pace, not contending for the win today - finishing clear but three seconds slower in 36.93s.

Speed demon Julien Epaillard (FRA) and the 11 year old Queeletta set off at a gallop, the Frenchman daring the mare around the course. They powered to the finish, shaving milliseconds off Aznar’s time to take provisional lead in 32.94s.

No stranger to wins in the final class of the weekend, LGCT ranking leader Pieter Devos (BEL) looked determined to chalk up another victory with Jade vd Bisschop. But the London Underground oxer fell, as did the Tennor plank, and the duo couldn’t challenge for the top today.

Georgina Bloomberg (USA) stayed true to her word with the bigger striding Quibelle, riding a beautifully smooth ride. But they landed too deep to the second part of the double, the vertical falling and costing them a win today.

Jos Verlooy (BEL) was determined from the off, with his 10 year old bay mare quick around the corners. He checked the horse to the delicate Tennor plank, but made up time to the final fence, and managed to beat Epaillard’s time by 0.06s. The new time to beat would be 32.88s, with the pressure on the final riders to come.

Irish hope Denis Lynch brought back the big-striding 9 year old stallion Gun Powder, hoping for an explosive finish to the weekend. But they knew they would have to produce something special to beat Verlooy’s time and an unlucky 4 faults at the combination would drop them out of contention.

Final British hope William Whitaker (GBR) had the crowd behind him, and they looked on fantastic form in the first part of the course. But there were groans as they too came undone at the double combination, and the hopes of a British win today would tumble.

Penultimate rider to go, the experienced Roger-Yves Bost (FRA) had all the pressure on his shoulders, but looked to take on the track at a steadier pace with Sangria du Coty. They finished clear, but with a much slower time of 38.36s - a good result and a confidence building round.

Last to go, and in prime position to steal the win was Francois Mathy Jr with Uno de la Roque.They took the tightest turns they possible could, but the 11 year old gelding couldn’t match Verlooy’s time, and they finished clear in 34.37s.