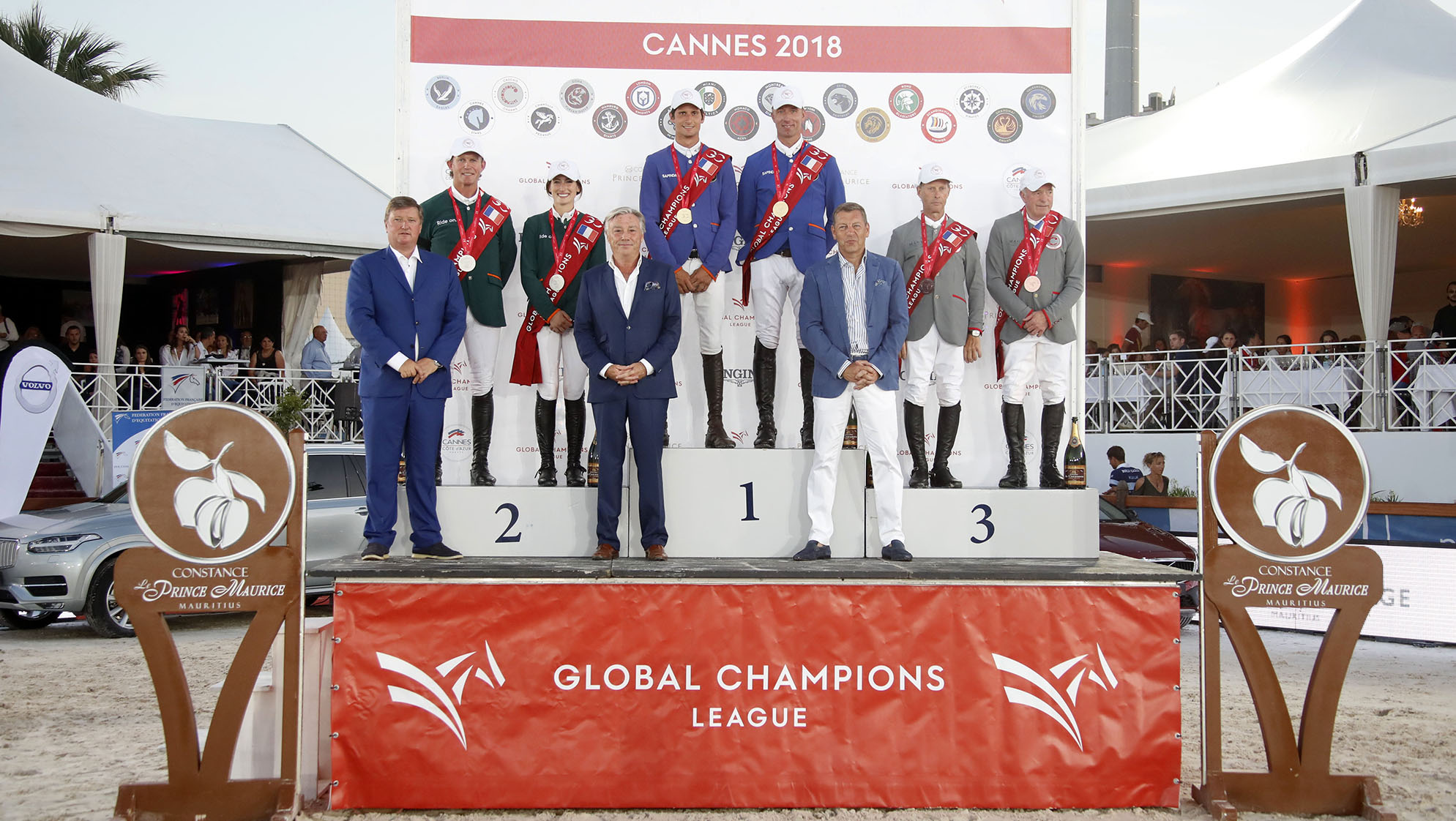 Valkenswaard United’s Alberto Zorzi and Jur Vrieling pulled out an oscar-winning performance in tonight’s GCL Cannes, rising from 7th to take a spectacular win on the French Riviera.

Tonight’s GCL Cannes was a blockbuster, with drama right down to the final fence as United rose to the win. Miami Celtics Jessica Springsteen and Cameron Hanley managed to hold onto second, with the formidable duo of John Whitaker and Rolf-Göran Bengtsson teaming up for the Cascais Charms - and delivering - to take third.

The drama meant there was a shuffle in the overall rankings, as teams fight to qualify for the GCL Super Cup, which will be held at the GC Play Offs in Prague this December. Holding onto their lead are the London Knights, now on 153 points, however United have closed the gap to just a five point difference, sitting on 148 overall. Shanghai Swans remain in third with 115 but look dangerously close to be overtaken by the Celtics, sitting on 109 points overall.

As fans packed the grandstands in Cannes, and VIPs walked the red carpet, the sun began it’s slow descent over La Croisette - lengthening shadows across the arena and giving the horses plenty to look at.

Uliano Vezzani’s course afforded no mistakes, with any lack of rhythm and balance repaid with fences falling everywhere. The technical track featured a Longines treble set along the grandstand, a wide grey and white Volvo oxer early on in the course and a gappy Cannes vertical on the way to the in-gate.

But the biggest challenge today in the Constance Le Prince Maurice sponsored class was the line to the red and white GCL double, set away from the in-gate and requiring riders to come in deep around the corner to face the obstacle straight on. An oxer in with a vertical out, the poles fell at the lightest of touches time and time again.

St Tropez Pirates made a strategic change, bringing in Edwina Tops-Alexander to compete alongside Pieter Devos, but it wasn’t enough after four faults for Tops-Alexander and an unusual 12 for Devos meant the team would drop down the order.

Montreal Diamonds pulled out the big guns, with Jos Verlooy and Harrie Smolders bringing out top stallions Caracas and Emerald. But the penultimate pole fell again, with Verlooy picking up four faults. The back rail of the GCL double came down, meaning it would be another four for the team, putting the team on a total of 20 faults.

There was disappointment for the Paris Panthers and Shanghai Swans, with both teams failing to move up the order.

Michael G Duffy of Madrid in Motion has been faultless throughout GCL Cannes this weekend, and today entered the arena wearing a black armband in memory of friend and show jumper Jack Dodd. This time competing with Castlefield Rubinus, the U25 rider put in a phenomenal round, scoring a double clear for his team. Speaking after his round, he said “[It’s been a] tough week, we lost one of our best riders and friends, and he was with me there riding around today. We grew up together and have been best friends - he was in there with me today, I know it.”

One team to rise were Valkenswaard United - the team one of those carrying through a score of four. A rub for Alberto Zorzi and Fair Light van T Heike put them onto 8 in total, but a brilliantly quick clear from Jur Vrieling and VDL Glasgow v. Merelsnest N.O.P. kept them there, the lowest scoring team so far and with a speedy combined time. They would ensue a long wait to see if they could be in with a podium position.

Cascais Charms fielded the heavy-weight duo of John Whitaker and Rolf-Göran Bengtsson - a clear for Whitaker and Cassinis Chaplin, and just four faults for Bengtsson with Oak Grove's Carlyle moved them up the order too, just behind the blue and orange United team. Speaking after his round, the seasoned Whitaker said: “It’s a tough course, we have some serious jumping - you’re not messing about here! We’re knocking on the door and we’re pulling up today, so it’s good.”

Despite valiant clears from Christian Kukuk of Berlin Eagles, Abdel Saïd of Rome Gladiators, Pedro Veniss of Shanghai Swans, David Will of New York Empire and Sameh El Dahan of Hamburg Giants, their teammates couldn’t keep a zero score, with this the first event of the year where no team riders both jumped clean in the second round.

Ranking leaders London Knights made a horse change, with Ben Maher bringing out Explosion W. But the vertical out of the GCL double caught them out, and then the liverpool pole fell, the British rider collecting 8 faults. Teammate Olivier Philippaerts put in a careful round with H&M Legend of Love, the grey mare listening to her riders every request. A double clear for the Belgian rider would keep the team at the sharp end of the overall ranking battle, but the duo would finish off the podium today.

And so it came down to the big three.

A pole for Chantilly Pegasus’ Roger-Yves Bost with Sunshine du Phare would put the team on 8, with the pressure on Carlos Lopez to say clear and fast to keep a podium place. A horse change for Lopez, this time bringing out Ulhane de Conde, didn’t pay off, and a refusal at the GCL double dropped them off the podium. Another fault would plummet the team down to a score of 16, way out of contention for today.

Miami Celtics were the first of the teams to enter today on a completely clean score and made no changes to their horse or rider line-up. Jessica Springsteen was first to go with RMF Swinny du Parc, but an early pole heaped the pressure on her remaining round. The GCL double fell again, putting the team on 8 overall, as the baton was passed to Cameron Hanley with Quirex. Despite the pressure, the Irishman delivered, bringing home a clear for his team and keeping them in sight of a podium finish.

Final team to go, Prague Lions had all the pressure on their shoulders - another clear would guarantee them the win. Ales Opatrny entered the ring as first to go with VDL Fakir, but two poles put them on a score of eight and level with United. It all came down to Niels Bruynseels with Gancia de Muze, and he had to go fast as well as clear. But another four faults dropped them out of contention, and off the podium, as United soared to the top of the leaderboard today.

Francois Bourey, LGCT Cannes Event Director: "I want to thank the City of Cannes and the Mayor and to say that there is a 6 million euro investment in infrastructure for the site and I can announce there will be €3 million more in the two years to come. It was an exceptional event and is improving every year - it's a big team effort."

Jan Tops, GCL Co-Founder: "It is an amazing place - people love to be here in the South of France. We have known Francois and his team for 30 years.

John Whitaker, Cascais Charms 3rd place: "We had great fun. To be honest we were only one fault away from winning which was my fault as yesterday I had five faults. We have moved up a long way today we are on our way up. We hopefully can team up a bit more and try and get ourselves up there."

Cameron Hanley, Miami Celtics, 2nd place: "It is a great concept - in these four rounds of jumping a lot can change, a lot can happen and its really exiting until the last horse jumps. I was delighted with my horse. Jessica was very good, clear the first day two rails today, but it was a really tough track today."

Alberto Zorzi, Valkenswaard United, 1st place: "I am lucky to be in the top team. I have such a nice rider with me and like this it is more easy to win. Fairlight, she always does her best, she is a super horse. We have a good combination together."

Jur Vrieling, Valkenswaard United, 1st place: "When you have to wait for the other ones it is stressful. This is my first time in the League - this competition is amazing the audience is really top. I spoke to our team manager and we agreed not to take the risk from two to three but to go clear and Glasgow did a fantastic job today. I hope we are going to beat London (Knights)."