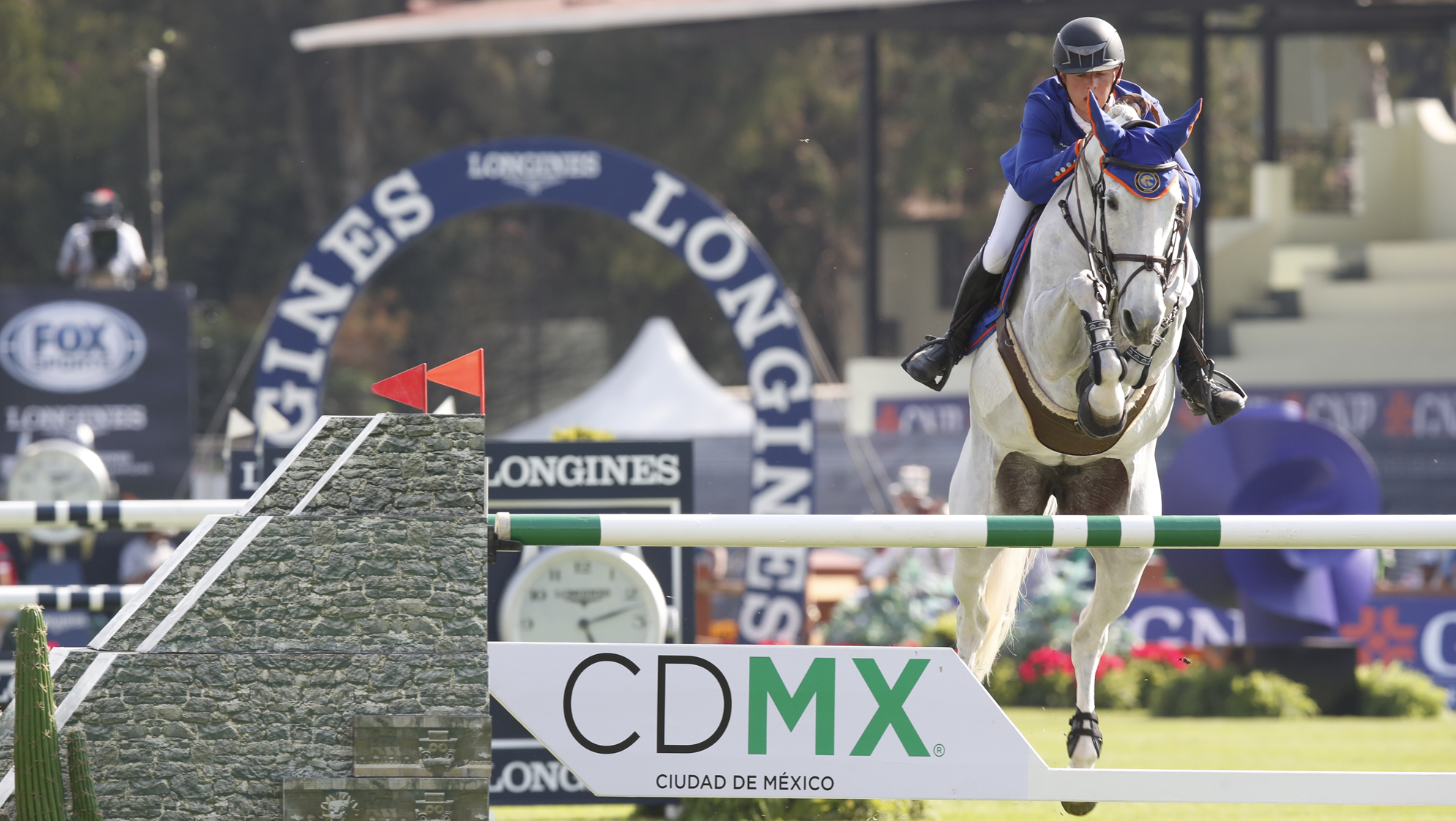 There was an atmosphere of intense focus in Mexico’s capital city as teams pulled out the big guns with top horsepower on show today. And with plenty of new signings showing their worth by producing flawless rounds under sky-high pressure, the competition provided a fascinating insight into many exciting combinations to watch as the season unfolds.

Speaking after his team’s win Bertram Allen said: “We were out to get a good start today. Alberto was clear and Molly was quick so we’re in the lead. But there are a few clears, and quite a few on four faults so Saturday will be very important.

"It’s such a beautiful place and the horses jump fantastic here - that’s why there’s so many clears. It’s a big and tough enough track, but so many horses are really jumping fantastic, it’s good to see.”

Course designer Javier Trenor set a flowing but big track, using the full expanse of the 125m x 75m grass arena. A roll back to a delicate GC vertical, followed by a big Banorte oxer required the riders to plan their turn perfectly - too tight and they might not have enough power for the line, too long and they risk loosing momentum and clocking up a time fault. Other challenges included a Massimo Dutti triple combination, an imposing Longines double set away from the in-gate and a Mazda oxer.

At over 2,000 metres above sea level the second event in the GCL Championship would prove a thriller as teams battled for pole position ahead of Saturday’s showdown. Under sunny skies fans flocked to the stunning arena creating a vibrant buzz from the word go.

New signing for the Berlin Eagles Malin Baryard-Johnsson made her debut for the team today, and spoke of the picturesque area ahead of the competition: "It’s fantastic - what a place, what a ring. It’s beautiful. It’s a big enough track today, but it’s fair."

She was joined on the course walk by new teammate Lorenzo de Luca, who said: "It’s great to ride with Malin, and we have a strong team with many good horses. So I’m very much looking forward to the year.”

But it was Valkenswaard United who would take pole position today, with the long time pairing of Bertram Allen and Alberto Zorzi putting the team in the best possible position ahead of Saturday’s showdown, where today’s faults will carry through.

London Knights
First to go Nicola Philippaerts entered the arena with Chilli Willi, the experienced scopey stallion striding proudly into the grass ring. But an early rail caught the pairing out, the stallion dropping a hind leg in the GNP oxer and putting a costly four faults on their score.

Twin brother and teammate Olivier picked up the reins with H&M Extra, the Knights clearly looking for a strong start by fielding two of their top horses. The pair cruised around the arena in a steady rhythm, delivering a clear for the team to keep them on four overall.

St Tropez Pirates
Another formidable duo, Edwina Tops-Alexander and top mare California looked on fiery form as they tackled the challenging track. The mare travelled over the grass arena with ease, but the roll back to the GC vertical just caught them out, putting the team on four faults.

Pieter Devos and Claire Z knew they would have to deliver a fast clear to beat the Knights today and the experienced combination pulled out all the stops to deliver - finishing clear and crucially in a faster time to take over the top spot.

Doha Falcons
Another team to field two experienced teammates were the Falcons, as Michael Whitaker took on today’s track with Strides Hilanasterne. But the Banorte oxer tumbled as his horse fought for his head, with a disappointed Michael shaking his head as he exited the arena.

Bassem Hassan Mohammed brought out the ever-consistent Gunder, the pressure on his shoulders to finish clear and keep the team level with the first two to go. And there seemed to be a pattern forming as the pair produced yet another clear, proving their worth as the Falcons’ anchor.

Chantilly Pegasus
Rene Lopez brought out Histoire D O for his first appearance in the 2019 GCL Championship, the bay horse popping over the fences with an expressive flick of his tail. The duo looked good for a clear, until there was heartbreak at the last - the GCL oxer toppled after Rene put in an extra stride, clipping the front rail and adding four to their score.

U25 rider Constant van Paesschen and the ever-expressive stallion Jilbert van ' T Ruytershof bucked and played their way around the arena, the stallion looking completely at ease, fresh and keen in the expansive grass arena. Keeping with the pattern of scores, they secured a clear, keeping the team on four faults overall.

Cannes Stars
Another horse looking fresh and keen for today’s course was Jane Richard Philips’ Foica van den Bisschop. But it wasn’t to be as the mare became a little strong, with two poles falling, and collected two time faults to boot to put the team on a score of ten faults.

New signing Abdel Saïd and Venise du Reverdy had all the pressure to not add a single fault to their score. But it came undone at the final fence, the red and white GCL oxer costing the team another four faults after Venise du Reverdy unfolded a little too quickly over the back rail. The team would finish on fourteen faults overall.

Monaco Aces
Another new signing U25 rider Jos Verlooy piloted his chestnut horse Igor masterfully around the arena. With clear intent written across his face, Jos flew around the course, finishing clear and with a fast time of 74.46s before passing the baton to new teammate Laura Kraut.

Making her debut for the Aces, Laura brought out top mare Zeremonie, fully focused on producing the goods for the team. Their close partnership evident for the world to see, Laura and Zeremonie magicked the first double clear of the day, putting the Aces at the top of the leaderboard so far.

Laura spoke after her round “It’s never easy to follow a clear like Jos’! We felt it was more important to be clear today than fastest, and we went with the pace of our horses, so we’re very happy to be clear today.”

Madrid in Motion
Experienced athlete and team manager Eric van der Vleuten and Wunschkind were the first to go for the GCL Super Cup winning team, and paved the way perfectly for son Maikel, finishing clear.

Maikel van der Vleuten and Idi Utopia had a moment over the first fence, the dark horse reaching to clear the ground. But their luck was in and the duo produced the second double clear of the day, slipping just behind the Aces on time.

Shanghai Swans
Current ranking leaders the Swans brought out new signing Peder Fredricson with his relatively new horse Zacramento - the Swedish rider looking one cool customer as they took on the track. But the team’s tactics to sign Peder proved instantly worthwhile, as they produced yet another clear, with a strong time to put them in contention for the top spot.

Shane Sweetnam picked up the reins with Kirschwasser Scf, powering around the arena to pull another foot-perfect round out of the bag, galloping to the final line to better the Aces' time. The Swans would soar to the top of the leaderboard.

They may be a young team age wise, but the efficient and experienced pair pulled out all the stops to deliver a fast double clear, with Bertram and Molly taking out strides left, right and centre to put the team into pole postition, seconds ahead of their closest rivals.

Paris Panthers
It would be a good day for new recruits, after former world number one Harrie Smolders produced a magnificent clear with liver chestnut stallion Don VHP Z - the consistent pair tackling the tough track with ease.

Teammate and long-time Panther Gregory Wathelet backed him up with another clear on Qualido, a touch slower than United but in with a real chance of a podium on Saturday.

Berlin Eagles
Another fresh face on the GCL team series, Malin Baryard-Johnsson and the fiery H&M Indiana also proved their worth to the Eagles, flying to the finish to bring out her first clear for the team at their Championship debut.

However it would be a reverse of fortunes, after Lorenzo de Luca and Evita van't Zoggehof just tipped a pole, collecting four faults for the team and dropping them down the order.

Prague Lions
Seasoned team member Neils Bruynseels and Gancia de Muze put in a nice round, clearing the imposing Longines double with ease and securing a clear for the Lions.

U25 rider Anna Kellnerova brought out Catch Me If You Can OLD, the relatively new combination looking in perfect harmony as they soared around the course. The pair cemented a brilliant double clear for the team, with team manager Jessica Kurten punching the air in delight at her team’s result.

Miami Celtics
Shane Breen and U25 rider Michael Duffy entered the arena for the Celtics together, the team reigning champions of this event and looking to do the double this weekend.

First to go Shane and Ipswich van de Wolfsakker had an unlucky pole, just clipping a wide oxer and giving the team a costly four faults - the Irishman clearly disappointed at their luck today.

Young star Michael Duffy was part of the 2017 winning combination, and today brought out Quintano. Despite the pressure to produce a clear, the young talent delivered, pulling out an impressive round to keep the team on a score of four, fastest of the four faulters, and within a pole of a potential podium.

Hamburg Giants
The Giants brought out the big guns today, with Simon Delestre and Uccello de Will first to go for the team. The huge striding chestnut gave Simon plenty to do, but the French rider managed him perfectly to keep the Giants clear.

Teammate Mathilda Karlsson watched on as Bart Bles took up the mantle with Israel v.d.Dennehoeve. The final vertical of the Massimo Dutti triple combination rattled but the pole stayed put, keeping the team clear.

Scandinavian Vikings
U25 rider Evelina Tovek and Dalila de la Pomme produced a flawless round, securing a clear for the team in style before passing on the baton to Christian Ahlmann.

Team anchor Christian rode the 11 year old mare Dolocia powerfully around the track, but took the corner to the final line just a little too short, the GC Prague Playoffs vertical falling and costing the team four faults.

New York Empire
Daniel Bluman and Denis Lynch teamed up for the first time in history this weekend in Mexico City, the two new signings for the team keen to prove their worth this season.

Daniel was first to go with Olympic ride Sancha LS. But it wasn’t to be after Sancha came off the bridle a little at the Mazda oxer, taking down the back rail and putting the team on four faults.

Experienced Irishman Denis knew he had everything to do with Hector van d’Abdijhoeve, but a further two poles, including that unlucky Mazda oxer, meant the team would tumble down the order with everything to do on Saturday.