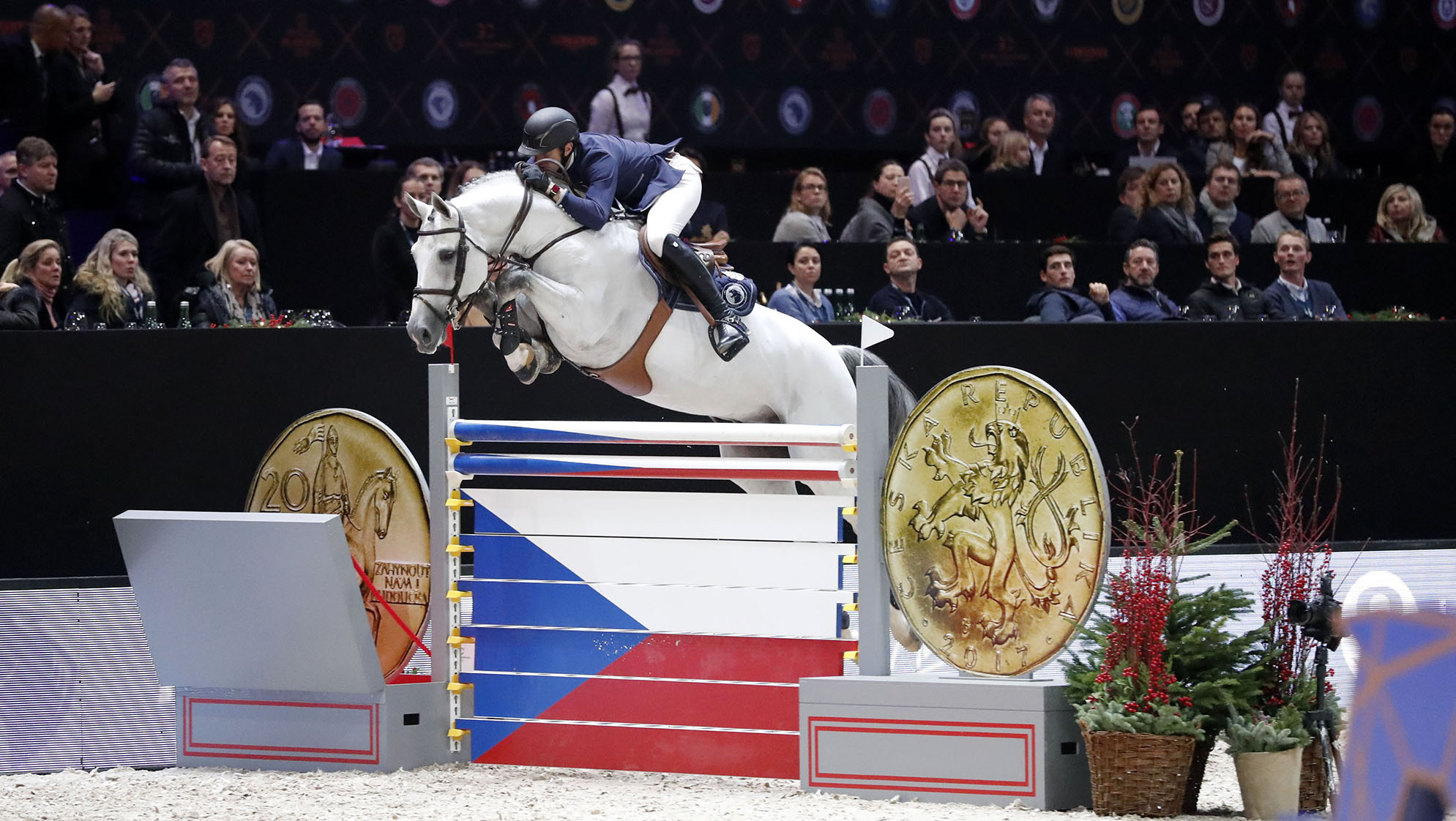 In an electric opening night of the inaugural GC Prague Playoffs, the quarter-finals of the GCL Super Cup witnessed high drama and a rollercoaster of emotions as 12 teams took centre stage in the Czech capital city.

The stakes were high in this innovative and ruthless knockout format, with four teams facing the ultimate jeopardy of elimination.

The unique O2 Arena created an intense atmosphere, as the Paris Panthers prowled to the top of the scoreboard this evening to lead the eight teams who have qualified for Friday night’s semi-finals.

The O2 Arena burst into an extravaganza of special effects as the Walk of Champions presentation got underway. Suddenly six-foot flames shot out of the arena floor as the stars of show jumping stars paraded in front of cheering spectators with coverage beamed around the world.

The elite riders who have qualified for the Longines Global Champions Tour Super Grand Prix and the GCL Super Cup entered the arena to a fantastic sound and light show setting the scene for a spectacular four days of top sport and entertainment.

To the powerful music and lyrics from the best-selling rock anthem Legendary, riders waved to delighted fans as GCL team logos were beamed on to the sand surface of the arena and screens were lit up with colour. There was a huge cheer for the home city team Prague Lions followed by the Czech Republic National Anthem.

Fans at home also enjoyed an enhanced viewing experience thanks to some spectacular virtual graphics with horse and rider statistics, transforming the way the competition was watched.

The new concept of the GC Prague Playoffs has propelled the LGCT and GCL competitions into a new era. This groundbreaking new tournament is the culmination of a thrilling year of top sport and 19 teams have been vying for a ticket to the Czech Republic’s capital city, but only the top 16 teams could qualify. With the championship’s four top ranked teams being fast-tracked to Friday’s semi-finals, Thursday’s quarter-finals were an all-or-nothing mission for eight of the 12 teams to claim their ticket to the next round.

Who would find form in the electric atmosphere of the O2 Arena and who would succumb to the pressure of this strategic competition where every score counts for each of the team’s three riders — a new format from the usual two competitors seen throughout the rest of the year. Each had one chance to produce the performance of their lives to ensure they were in the top eight for tomorrow’s semi-finals; it was all to play for as the 12 teams went into battle and the stakes were sky high.

Course designer Uliano Vezzani conjured up a typically intriguing course with swooping lines to begin before the technicality was upped several notches. Fences came thick and fast off the bends with plenty to catch the eye of the horses and the dimensions of the fences were big and wide. The final line, away from the in-gate, was to prove most influential with a big square oxer over two square water trays followed by an airy double of verticals off either five short or four long strides, with the majority of riders choosing the latter.

Jumping in reverse order of their season standings, it was New York Empire who would kick start the sporting action in the GCL Super Cup quarter finals and they received a warm welcome from the spectators. However their challenge came to a dramatic end when pathfinder David Will’s mount Forest Gump took exception to the Czech flag fence and the pair were eliminated.

“I’m sorry for my team mates as we were all enthusiastic coming here and wanted to do well,” said David Will afterwards. “It’s a little bit impressive coming in to this arena, but the horses are all experienced so I didn’t expect that to happen.”

The faults added up, too, for the next team, the Cannes Stars, before a confident looking trio from the Paris Panthers leapt to the top of the leaderboard courtesy of a double clear from Gregory Wathelet on the hugely careful MJT Nevados S and Darragh Kenny riding Balou Du Reventon. With Yuri Mansur and Ibelle Ask just knocking a rail at the Czech flag planks, their team total of four was to prove the one to beat.

“That was the most important thing – to make sure we got through to tomorrow’s semi-final, so it’s great to have got that done,” said Darragh Kenny. “This is an amazing stadium to jump in and Uliano Vezzani has done a brilliant job with the course — that last double of verticals is very difficult so it’ll make for an interesting class.”

A speedy trio of riders came forward for the Monaco Aces but accumulated 13 points, leaving them with an anxious wait as to whether they’d finish in the drop zone. Tension was ferocious as the competition unfolded.

The team of Doha Fursan Qatar then came out all guns blazing, posting a score of five and putting them bang in contention for a place in the semi-final.

“I’d like to thank my team, they were really in form today; we were excited beforehand but we’re more excited now that we’re through to semi finals,” said Sheikh Ali Al Thani, who collected just four faults with the nine-year-old Sirocco, adding to the single time-fault provided by his team-mate Michael Whitaker on Strides Hilansterne and the clear from anchorman Bassem Hassan Mohammed riding his great partner Gunder.

The Berlin Eagles came home on a score of nine to place them third at the halfway point in this enthralling competition, with only four clears on the card. Paris Panthers still held a commanding lead with Doha Fursan Qatar chasing them home in second.

Madrid In Motion soared into the top three with an eight point total, then the biggest roar of the night came for the home team the Prague Lions and local hero Anna Kellnerova with Silverstone G. However their third rider Peder Fredricson’s mount Hansson WL was the second horse to take a dislike to the Czech flag fence and their 17 point total left them in the danger zone and facing an anxious wait thereafter.

“It was a disappointing result  but we’ll be watching the rest to hope we can scratch through,” said Jessica Kurten, team manager of the Prague Lions.

They and the other teams on the edge of elimination watched anxiously from the warm-up arena as their fate unfolded on the big O2 stage.

Some costly rounds proved expensive for the St Tropez Pirates before the Scandinavian Vikings came home on a score of nine.

Montreal Diamonds slipped into the top eight by the skin of their teeth with a score of 16 before the last team, the Shanghai Swans, who just missed out on a fast-track ticket to the semi-finals, came into battle.

Pathfinder Daniel Deusser gave Calisto Blue a gem of a ride to finish clear, then Pius Schwizer and Living The Dream followed suit. Anchorman Shane Sweetnam, the team’s best performer all season, needed another clear to win but uncharacteristically Main Road hit two rails and the team finished on eight, which was good enough for third, behind leaders the Paris Panthers and runners-up Doha Fursan Qatar. With the top eight all jumping again in Friday night’s semi-final, there were plenty of high-fives and jubilation behind the scenes as the final result was announced.

Sadly, those leaving the tournament at this stage were the home team, Prague Lions, who had been teetering on the edge in nail-biting agony and finally faced the disappointment of missing out by just one point, New York Empire, Cannes Stars and St Tropez Pirates.

The season’s top four teams from the GCL championship, London Knights, Valkenswaard United, Miami Celtics and Rome Gladiators are back in the mix for Friday’s semi-finals and with each of the 12 teams starting back on a zero score and the opportunity for horse and rider substitutions ahead of the penultimate decider, tactics, strategy and clear focus will be in order as teams battle for a place in Sunday’s final.