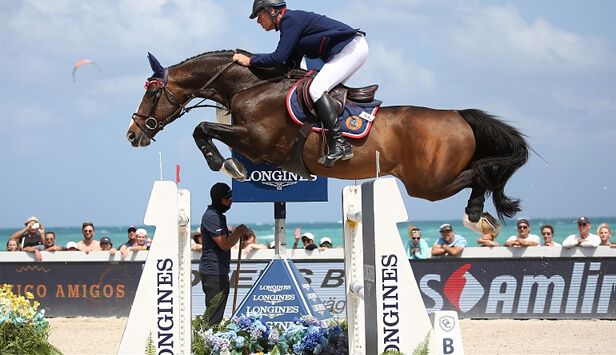 The 1m72 bay KWPN stallion is best known for his partnership and success under top German rider Christian Ahlmann. The duo have been regulars on Tour, competing in 34 events over every season from 2009 and taking top 10 results in Mexico City, Paris, Doha, London, Monaco, Cascais, Chantilly, Cannes and Valkenswaard.

“He is my partner for eight years, and I’m really, really happy to be his rider.” We spent some time with Christian and the phenomenal stallion in Paris, to understand a little more about the relationship between Christian and Taloubet.

With all the great partnerships, the building of trust and understanding between horse and rider took time. Christian elaborates: “He had some problems before I took him over. I think we needed a little bit of time to know each other - the moment he could feel safe with me we did the next step, and everything with easy for him.” And trust was key for unlocking Taloubet’s potential, something Christian always held in high regard: "He trusted me 100% and then he went [for it] - he could do every possible situation in the world. This is also something special and you can really see how clever he is. The moment he understands, he can do it. He’s very clever, he’s a professor.”

‘The Professor’; a pretty apt name for a horse so highly regarded, and so respected within the sport with fans all around the world. But the best success stories come when brains are mixed with brawn, of which the dark bay stallion has plenty. “He’s almost perfect. He’s the right size, strong build and the power he has is really special, and maybe unique. In the ring the scope he can develop out of small strides, he can jump forward I think like no other horse in the world. This makes him very quick.”

But as with the best athletes, Taloubet knows when to switch off and conserve his energy, and pull out all the stops when it’s time to shine, "He is so quiet, he looks like he’s sleeping the whole day but he’s a big friend. You cannot believe he’s a breeding stallion. But in the ring he’s almost too hot - he wants to do a good job, he’s really focused on the sport.”

And when you have as many Grands Prix under your belt as Christian and Taloubet, the partnership runs deeper. We asked Christian whether Taloubet had a special place in his heart, to which he replied, instantly, unquestionably, “for sure. I love him.”