The Countdown for LGCT Rome Kicks Off 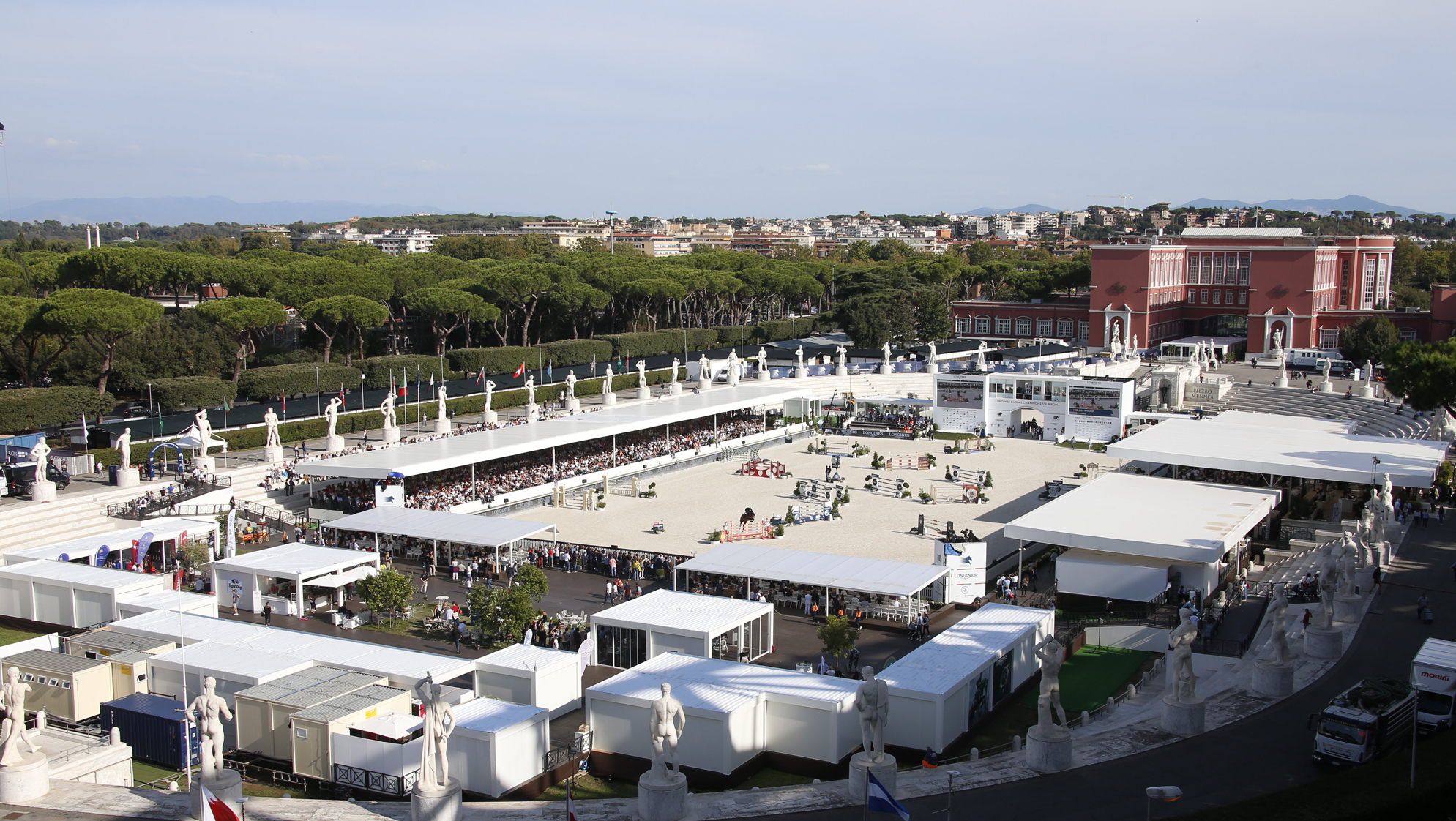 The countdown for Longines Global Champions Tour of Rome is underway, with the 15th - and penultimate - leg of the 2018 Championship race reaching fever pitch.

From the 6th - 9th September, the Stadio dei Marmi will welcome the very top horses and riders in the world to it’s unique arena for the 4th consecutive year, with a four day festival of show jumping taking place in Italy’s capital city.

With the event free to the public, there will be something for all the family with a varied and exciting programme on offer. As well as top sport, a variety of artists, painters and sculptors will again be present this year to pay homage to the horse: Master Francesco Scagliarini, known for his equine heads crafted of typical Salentinian materials as Cursi or Alezio stone, wrought iron, clay and olive wood; painter Tita Signorelli, from Turin, and shiatsu specialist Daniela Mariano, long time friends sharing a passion for the expressive and creative side of animal language, both equine and pets. Spectators will also be treated to entertainment from dancers, acrobats and comedians - all  coming together for the special equestrian performance ‘I Cavalli di Roma. Il Carnevale Romano’.

The presence of the 4th Carabinieri Mounted Regiment will bring an element of tradition and history to the Stadio dei Marmi. Their famous historic carousel - with the classical line up of 145 horses - will culminate in the Regiment’s now-legendary and hair-raising final charge which reenacts the glorious “Carica di Pastrengo”.

LGCT Rome reaffirms the social value of the horse, with the concept that ’sitting on a horse, we are all equal’. This slogan inspires the Equestrian Centre of San Raffaele Viterbo, a healthcare facility registered with the national health system which offers a comprehensive rehabilitation service. Their well-known carousel performed by children will be staged at Stadio dei Marmi ‘Pietro Mennea’. The performance is a symbol for equal opportunities, and will be a very special moment for spectators and all involved.

From a sporting perspective, fans and VIPs will be treated to four days of exceptional sport as the top international riders in the world compete for the lions share of the 600,000 euro prize purse on offer in Rome.

The 300,000 euro 1.60m Longines Global Champions Tour Grand Prix of Rome will take centre stage on Saturday afternoon, with overall leader Ben Maher (GBR) in a position to secure the 2018 title with a strong result next weekend. With the winner of the LGCT Grand Prix of Rome also qualifying for a place in the GC Playoffs Longines Global Champions Tour Super Grand Prix, riders will be fighting tooth and nail for a golden ticket and a chance at a further 1.25 million euro prize purse this December in Prague.

Saturday's highlights will include the second round of the GCL team series, where home city squad, the Rome Gladiators, will try to defend or better their provisional 3rd position in the overall ranking. And this year the battle has been turbo-charged with a brand new concept for show jumping. The new GC Playoffs will also feature the GCL Super Cup with over €10 million in prize money, the ultimate showdown in show jumping.

One of the oldest continuously occupied cities in Europe, Rome’s historic heart contains iconic monuments and artistic masterpieces from the magnificent Colosseum and the Pantheon to the Sistine Chapel and the ruins of the Roman Forum. Visitors can take in Renaissance palazzos and Baroque fountains or simply stroll through beautiful piazzas and soak up the vibrancy of the city of La Dolce Vita. The Longines Global Champions Tour of Rome will be staged at the impressive Stadio dei Marmi for the fourth year running, a unique location which is ringed by 59 classical marble statues depicting different sports.

The stadium is one of the arenas in the Foro Italico sports area, home to the Italian Olympic Committee. Both years have seen spectators filling every space available to catch a glimpse of the world’s show jumping heroes in action. Italian riders will be competing in front of a passionate local and international crowd as the battle for the series championship reaches a crucial stage with competitors locked in a gladiatorial battle for the honours.

The full international CSI5* rider list will be announced soon.