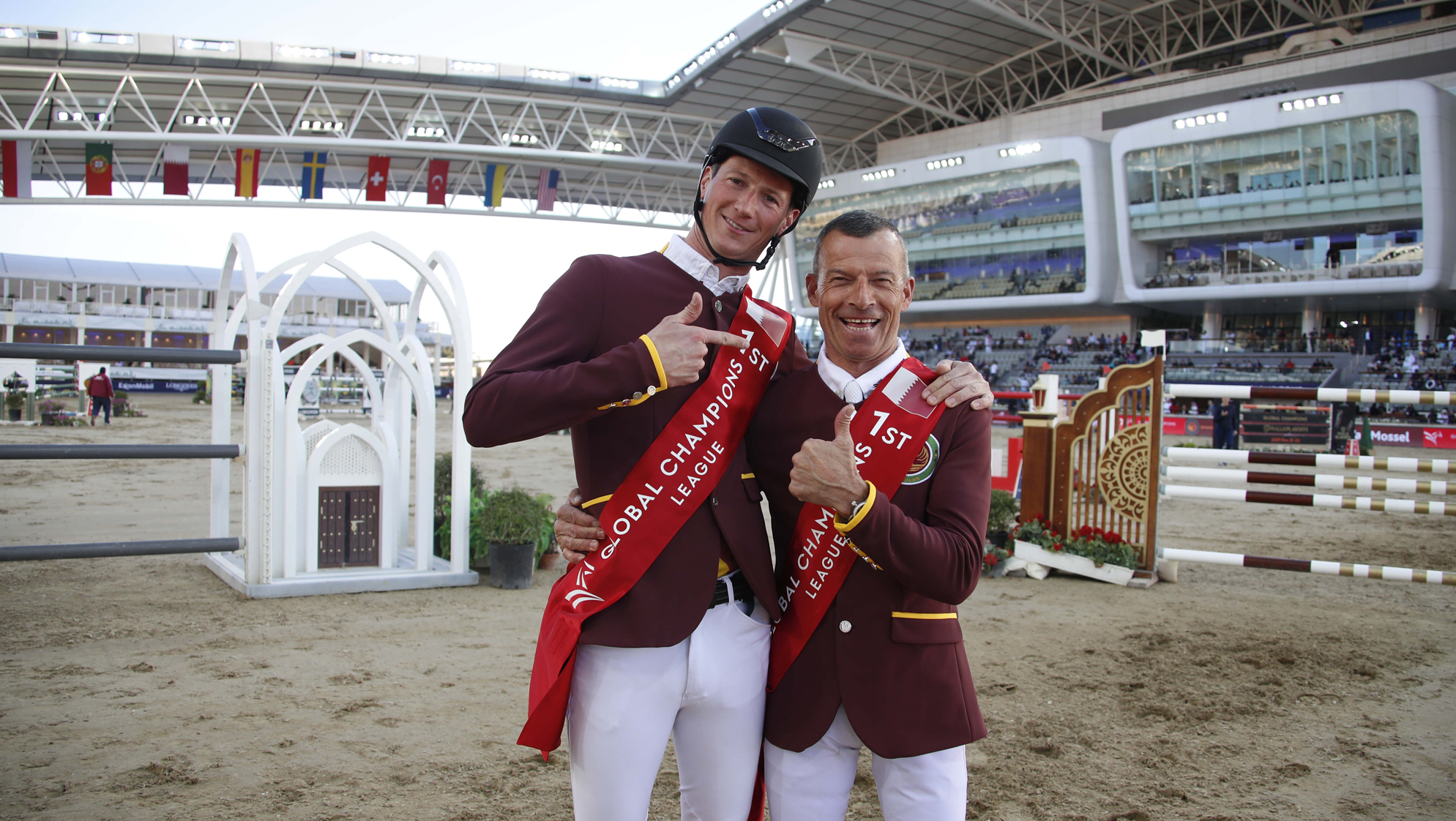 In a dramatic turn of events the Shanghai Swans soared to the lead in today’s GCL Doha, with a high octane competition at AL SHAQAB seeing many of the very best horse and rider combinations crumbling under pressure.

Experienced Swans duo of Daniel Deusser and Pius Schwizer kept cool heads in the Qatari heat, pulling out a flawless performance to deliver the only faultless score of the event, finishing ahead of Valkenswaard United’s pairing of Bertram Allen and Frank Schuttert, with New York Empire’s Scott Brash and Hans-Dieter Dreher taking third.

A delighted Daniel said “We have a very good team, but still in the end you have to get the job done! We had a strong day on Thursday, and two clear rounds today - I have a super partner with Pius, so we’re very happy."

Pius praised his teammates, both equine and human: “My horse jumped amazing, and in my mind Daniel is the best rider in the world at the moment, so thank you Daniel!"

Despite their early win, Daniel remained humble about the long season ahead, and the strength of the teams this season."I expected more teams on a double clear today, but it showed the course was tough. There were faults everywhere. It’s a long season, but the first step is done so we hope to continue like this.”

As the sun made its slow descent across Qatar’s capital city, the magnificent AL SHAQAB lit up as the 16 teams contested for the first win of the season. But it would be a competition of shock results and cracks under pressure, with plenty of moving and shaking up and down the grid.

Uliano Vezzani’s challenging course saw London Knights charge up the field to finish in 5th, while today’s leaders Monaco Aces plummeted down the order to take 10th in an unpredictable and exciting class.

Omar Al Mannai, Commercial Manager of AL SHAQAB revealing in the press conference: "For us it is an honour to be part of this [championship]. I believe that today and the last two day days, you could see the crowd were very happy - the competition was very tough, I believe that we are now under the negotiation for the future collaboration with Jan and his team, and we are looking forward to continue to organise the kick off event for the coming three years."

Here’s how the competition unfolded:

First rider of the competition to go Niels Bruynseels knew that only a flawless round would do for the Lions. A fresh looking Delux van T & L skipped his way around the expansive sand arena, taking an open four strides to the double combination.

Watching from the sidelines teammate Wilm Vermeir rode every stride from the kiss and cry, with team manager Jessica Kurten captivated by her riders. But two early poles and a circle back from Anna Kellnerova and Catch Me If You Can OLD added 12 faults to the score, dropping them out of contention this weekend.

A horse change for both riders in the Stars team would prove a questionable strategic decision and a hot topic for debate. One down for Jane Richard Philips with Clipper du Haut du Roy, and a further two poles for Karel Cox with top horse Evert put the team on a score of 20, with both horses looking fresh and strong as they galloped around the large arena.

2018 Champions the Knights pulled Nicola Philippaerts off the bench, riding his top stallion Chilli Willi - a horse who has not competed at this level since the GC Prague Playoffs. But it was a positive result for the team tactics, with the duo clearing the fences with ease and looking on top form for the Knights.

Ben Maher and exceptional horse Explosion W took up the mantle for the scarlet-emblazoned Knights. A foot perfect masterclass from the Olympic rider and his now ten year old horse kept the team on a score of 5 overall, the first double clear of the day so far, and in a phenomenally quick combined time of 147.61s. Now the Knights would ensure a nervous wait as the rest of the teams took centre stage, hoping to charge up the final rankings.

There was disappointment for the home team, after an unexpected 17 faults for Jur Vrieling and VDL Glasgow vh Merelsnest N.O.P. meant the team would plummet down the order. Bassem Hassan Mohammed and Gunder kept their cool but another two poles put the team on a score of 29, right to the bottom of the standings, much to the dismay of local spectators.

The Eagles were another team to swap riders, with Christian Kukuk up front for this round of action. With lead horse Colestus on fighting form, Christian flew around the arena, managing the impressive grey stallion beautifully around the challenging track. But a hind leg left at the AL SHAQAB upright, and another pole in the double of verticals added 8 faults to their original score, putting the pressure on teammate Ludger Beerbaum.

The GC oxer fell for Ludger and Cool Feeling, adding further pressure to the team. But they were able to cross the line with no further faults, finishing on 16 faults.

A fast four for Roger-Yves Bost with Vino d’Espinet and a clear from Carlos Lopez with Admara put the team on a score of 8 overall. Carlos clearly had the team strategy and tactics in mind, riding a slower round than normal to ensure a clear.

After their impressive performance in round one, the Celtics made no rider change to their young line up. U25 athlete Harry Charles flew the flag first of all, ABC Quantum Cruise turning himself inside out to clear the fences. But as the course unfolded the gelding looked a little strong, and two poles fell as Harry battled to keep control.

Michael Duffy had his hands full with a fresh Quintano on Thursday, and the horse looked just as keen to jump today. Michael kept the gelding in a bouncy steady rhythm, but the first part of the combination fell again, dropping the team down to finish on a score of 12.

The GCL Super Cup winners knew they had a good opportunity to start the season on a high this weekend in Doha, and have kept many of their original team this year. Maikel van der Vleuten and Idi Utopia pulled out all the stops to finish clear, passing the baton to Michael G Duffy and Lapuccino. But the combination denied them a clean sheet today, and a disappointed Michael shook his head as he exited the arena, the team on 4 and leaving the door open for other teams to take the podium.

Two poles at the early combination for Yuri Mansur and Ibelle ASK put the Panthers on the back foot, adding pressure to Gregory Wathelet as the second rider to go. But that pressure would prove too much, with another 12 faults from Gregory and Iron Man van de Padenborre giving a combined score of 20 and an unexpected result for this formidable team.

The 2016 Champions have added new horsepower to their roster this season, with Bertram Allen bringing out top gelding Harley vd Bisschop to contest the first leg of the Championship. A flawless round from Bertram and the beautiful grey gelding kept the team on a clean score, with a strong time also helping the team in their quest for success.

Frank Schuttert brought out the big guns with top stallion Chianti's Champion, hoping to throw down the gauntlet to the rest of the teams. But the green and white oxer fell as they turned away from the in-gate, putting them on a score of four -  but fastest of four faulters with 149.65.

Leading lady Edwina Tops-Alexander knew only the best horsepower would be crucial to a good result today, bringing out champion mare California. But the back rail of the Doha oxer fell, and an edge of the seat moment at the double of verticals meant the team looked a little shaky on four faults.

Pieter Devos clipped the front rail for the combination with Espoir, putting the team on a total of eight and down the order behind the London Knights.

Long-term anchor Scott Brash and Hello Senator made the course look effortless, the 10 year old gelding popping the Longines vertical with ease. The brilliant clear from the duo was watched on by new teammate Denis Lynch, who clapped in approval as Scott crossed the line.

New signing Hans-Dieter Dreher knew he had to prove himself this weekend, the German rider piloting Prinz carefully around the tricky course. But they came in a little too deep to the Arabic vertical, rolling the pole and adding four to their score. The team slotted in just behind Valkenswaard United, with time proving an important factor in this competition.

U25 rider Evelina Tovek and Dalila de la Pomme took centre stage as the sun began to set across the arena. A rattle at the last, the AL SHAQAB oxer, but the duo finished clear, with a round that clearly had been planned to the stride. Geir Gulliksen and VDL Groep Quatro looked determined as they set off at a pace. But the GC Oxer fell again after they took seven strides, getting a little too close to the black and white fence. Another fence at the combination put them on 8 and out of contention for a podium.

Daniel Deusser and Calisto Blue lit up the arena as they powered around the course. The German maestro delivered again for the team, finishing on a flawless weekend score and in real contention for a strong result in the first leg of the Championship. With many of the second riders unable to back up their teammates' clear in the competition so far, all eyes were on Pius Schwizer and Cortney Cox to see if they could pull out the first flawless score.

Despite the pressure, the pair delivered, finishing on a score of zero and throwing down the gauntlet to the two remaining teams, a podium result at the very least guaranteed for the Swans.

Experienced French rider Simon Delestre set off at a pace with Chesall Zimequest, but it all came apart as they crashed through the first part of the combination. They found their tempo again, but it was clear that their confidence was knocked, finishing on 13 faults before Bart Bles had even picked up a canter. A further eight faults saw the team tumble like a stone, ending today on 21 overall.

Final team to go, Monaco Aces, had all the pressure on their shoulders. The team had made a horse change between rounds, with Jos Verlooy swapping in Igor from his previous mount Caracas. However the team would question that decision with hindsight, as the lightest of touches at the delicate vertical put the team on four, handing the win to the Swans. Despite the fault, Jos pulled out a fast round, looking to better United’s time to keep them in second.

Marlon Zanotelli knew a fast clear would keep them on the podium, but a single pole would put them in 7th or lower, such was the intensity and closeness of competition. But it completely unraveled for the team as Marlon and VDL Edgar M collected 12 faults, dropping them way down the order to finish in 10th overall in a shock result.

The GCL Championship now looks to round two, where Mexico City will host the 16 teams in another exhilarating battle for the second leg in an already electric series. For more information and details about GCL Mexico City, please click here.