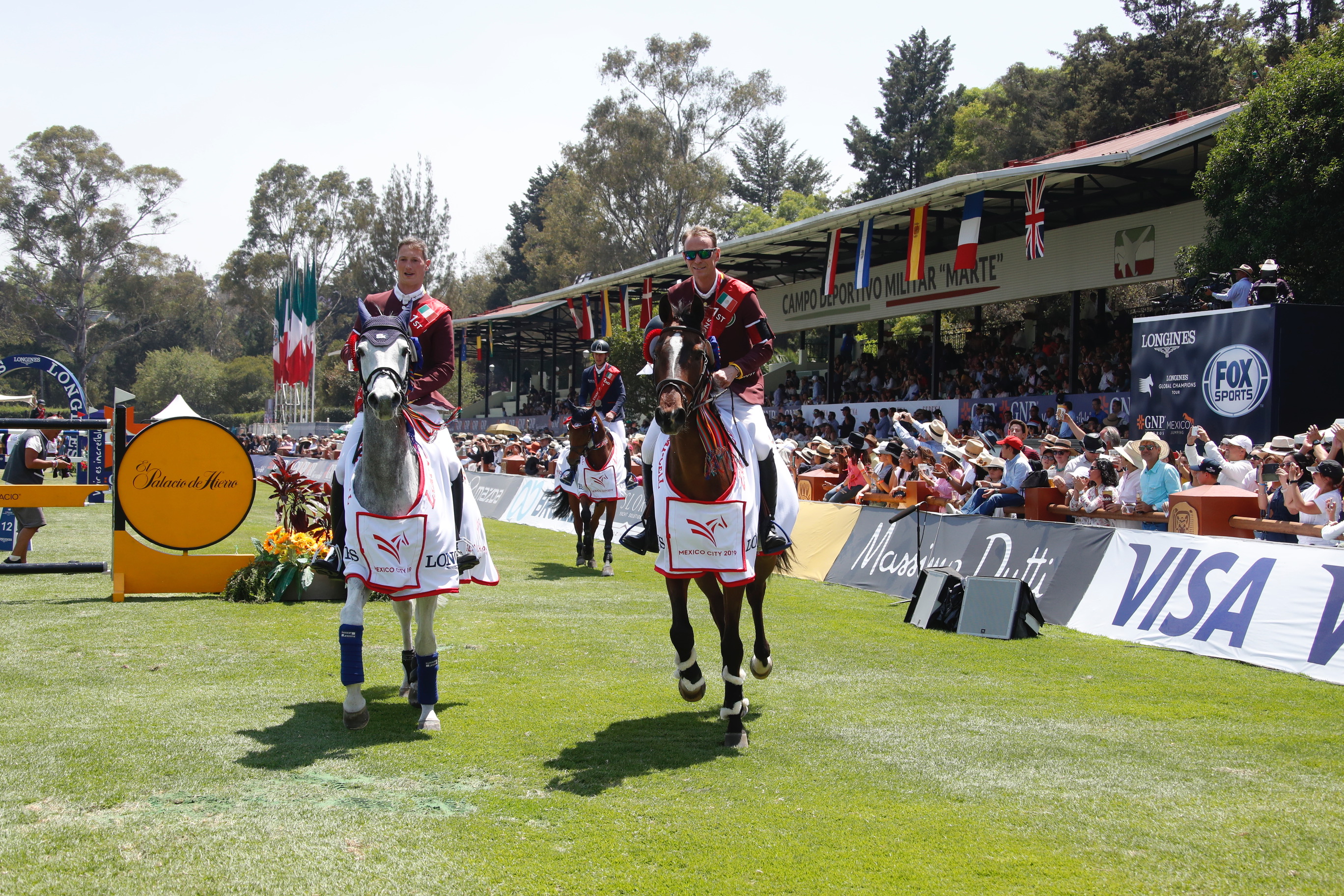 Shanghai Swans have thrown the gauntlet down to the rest of the GCL teams by extending their Championship lead by 25 points today in Mexico City. Daniel Deusser with Calisto Blue and Peder Fredricson with H&M Christian K took a convincing win in the picturesque grass arena, with new star striker signing Peder immediately proving his worth for the squad.

A delighted Daniel said: “This was a really different team compared to Doha. The expectations are high for this season, it is only the being but we are a very strong team and have I got a lot of confidence in us.​"

Teammate Peder agreed: "This is my first time competing for the Shanghai Swans and it couldn’t have gone better!"

Thousands of fans flocked to the brilliant Mexican arena to see the GCL showdown unfold today, and the teams did not disappoint in a spell-binding display of edge-of-the-seat sport.

Course designer Javier Trenor put together another flowing but challenging course, with options of lines for riders, and galloping distances requiring complete control, trust and precision. Athletes tackled a huge Massimo Dutto oxer, a Longines double combination, a GNP Seguros double combination, and a very skinny vertical set away from the in-gate caused a few problems. Gerco Schroder summed it up: “You have to pay attention at every second, the course does not allow you to take your eye of the ball.” Throughout the arena were eye-catching ‘Alebrijes’ - the brightly coloured Mexican folk art sculptures of fantastical animals adding flashes of brightness to today’s stage.

Speaking before the start of the class, new signing for the Paris Panthers Harrie Smolders said: "We are a very strong team, with very good riders and a lot of horsepower. I brought my best horses here in Don and Zinius. Don had a break after the GCL Super Cup in Prague, and he’s on fantastic form here. It’s early in the season to say which teams are strongest so far. Every team has a chef d’equipe, it’s growing and growing.”

Cannes Stars
With a heavy score of 14 carried over from Thursday, the Stars had everything to do today. First to go Jane Richard Philips and Clipper du Haut du Roy produced a brilliant clear, but picked up one time fault. Abdel Saïd and Venise du Reverdy matched their score perfectly, picking up one more time fault to keep the team on 16 overall.

New York Empire
Daniel Bluman and Sancha LS picked up another four faults for the team, before the a strategic swap to field Scott Brash and Hello Mr President paid off with the pair delivering a phenomenal round to jump clear, leaving the team on a score of 16.

Chantilly Pegasus
The Pegasus team made no horse or rider change, fielding Rene Lopez and Histoire D O up front to see if they could improve on their position. A steady clear was the strategy for the team, and it paid off, just a time fault adding to their score of four faults.

U25 rider Constant van Paesschen brought out top stallion Jilbert van ' T Ruytershof, the pair delivering an impressive clear in the first round of GCL. But it came undone at the GCL double of verticals, and a further pole plummeted them down the order to a score of 17 overall.

Berlin Eagles
Malin Baryard-Johnsson and H&M Indiana set off at a gallop, the fiery mare powering around the course and eating up the long lines with her stride, covering the ground to keep them clear and well within the time. Teammate Lorenzo de Luca took over the reins with Evita van't Zoggehof but an unlucky pole at the Massimo Dutti oxer put them on a total of eight faults.

Doha Falcons
From one bird of prey to another, the Falcons looked determined to jump clear today. With no horse or rider change, Michael Whitaker and Strides Hilanasterne were first to take up the mantle, but got a little too close to the GC Prague Playoffs vertical, picking up another four faults for the team.

Bassem Hassan Mohammed and Gunder took out the back rail of the Longines double, and the skinny vertical away from the in-gate tumbled to put the team on 16 overall.

London Knights
2018 Champions London Knights were keen for redemption today, with twin brothers Olivier and Nicola Philippaerts bringing out their top horses again for this round of action. Watched on by team manager Ben Maher, Olivier was first to go with H&M Extra. He delivered a foot perfect clear, putting the pressure on his brother Nicola and top stallion H&M Chilli Willi.

The famous stallion looked fresh and fit, powering to the first two fences with his ears pricked. Nicola kept the horse together but an unlucky rub at the Longines combination and a pole at the Banorte vertical added another eight to the team’s sore, putting them on 12 overall.

St Tropez Pirates
A strategic change for the Pirates saw Athina Onassis take over the reins with MHS Going Global. But a pole and two faults for time put the score onto 10 with Pieter Devos next to go.

Fresh from his win yesterday, Pieter swapped mounts to Espoir, and the switch paid off - the Belgian rider finishing clear to keep the team on 10 faults overall.

Miami Celtics
Another team to make a rider change, the Celtics brought out new striker William Whitaker with RMF Cadeau de Muze as team manager Helena Stormanns watched on from the kiss n cry. But eight faults put the team on a total of 12, with enormous pressure on the shoulders of U25 rider Michael Duffy to deliver a clear.

Michael’s horse Quintano jumped his heart out for the young Irish talent, pulling an impressive clear out of the bag to keep the team’s score on 12.

Scandinavian Vikings
Evelina Tovek kept Dalila de la Pomme for this round of the GCL Mexico City, the mare jumping with an expressive flick of her tail. But the GC Prague Playoffs vertical tumbled, adding four faults to the score.

Anchor Christian Ahlmann made a horse change to his chestnut stallion Take A Chance on me Z. But that fence would prove unlucky for the team, as it fell a second time and put the team on a score of 16 overall.

First of the teams on a zero score, the Giants kept their horse and rider combination unchanged. Simon Delestre was the first to go, but that GC Prague Playoffs fence would prove costly as Uccello de Will just clipped it with his hind hoof. A time fault to boot, and the team found themselves on a total of five overall.

Bart Bles and Israel v.d.Dennehoeve had a moment at the start after his bay gelding spooked dramatically at the brightly coloured horse sculpture. But Bart managed to sooth his mount, and the pair pulled off a brilliant clear to keep the team on five faults.

The GCL Super Cup winners looked in with a chance for a podium today, heading into the second round with a clear score. But a pole from Eric van der Vleuten and Wunschkind at the Longines combination would drop them to four faults overall.

A rider change for the team, with on-form Eduardo Alvarez Aznar taking over the reins from Maikel van der Vleuten would be a point of discussion for the team. The Spanish rider piloted Seringat around the course, but it quickly unraveled after the pair picked up 12 faults and dropped the team to 16 overall.

Prague Lions
There was heartache for the Lions after U25 rider Anna Kellnerova and Catch Me if You Can OLD collected a disappointing 12 faults after their brilliant performance on Thursday. The baton was passed to Niels Bruynseels and Utamaro D Ecaussines but another five faults would drop the Lions way down the order.

Monaco Aces
Jos Verlooy and Igor just rolled up a pole to put the Aces on four faults, before Laura Kraut and top mare Zeremonie took up the pace. But another pole at the GNP combination would put the team on eight overall, crucially behind the Hamburg Giants.

Shanghai Swans
Current ranking leaders the Swans made another strategic rider change, with Daniel Deusser picking up the reins with the on-form Calisto Blue. The little horse flew over the fences, but the skinny pole claimed another victim, with four faults collected for the team.

Peder Fredricson made a horse change to H&M Christian K, with all the pressure on his shoulders to deliver a fast clear to keep in the lead. With his red leader armband flashing in the sun, the duo flew around the course, Peder taking just a daring line to the GCL double of verticals to save time. And the Swedish rider and his horse delivered, finishing clear and keeping the team on a score of four with just two teams left to jump.

Paris Panthers
New star striker Harrie Smolders and the ever-consistent Don VHP Z had an unusual early pole, putting the pressure on the Panthers to keep a clear score and fast time. The duo delivered, handing over the team’s chances of a podium to Gregory Wathelet.

Gregory absolutely had to finish clear, and brought out his grey stallion MJT Nevados S for this round of action. The Belgian kept his horse’s rhythm smooth, but the double of GCL verticals fell, as did the Massimo Dutti oxer before it all started to unravel to plummet the team down the order to finish on a score of 20.

Valkenswaard United
Valkenswaard United would have a pole in hand, but huge pressure on their shoulders to deliver. The 2017 winning team fielded Alberto Zorzi and Contanga first, but it wasn’t to be after Alberto pulled up his horse. The veterinary team were immediately on the scene and took all precautions to ensure the best care for the horse. Once back at the stables it was confirmed Contanga had a soft tissue related injury, which she is expected to make a full recovery from in due course.

However this would mean the United team were eliminated, leaving the Swans to take a second win of the season and broaden their lead over the rest of the field.

The GCL Championship now looks to Miami Beach, for the third round of electrifying competition in the 2019 season.