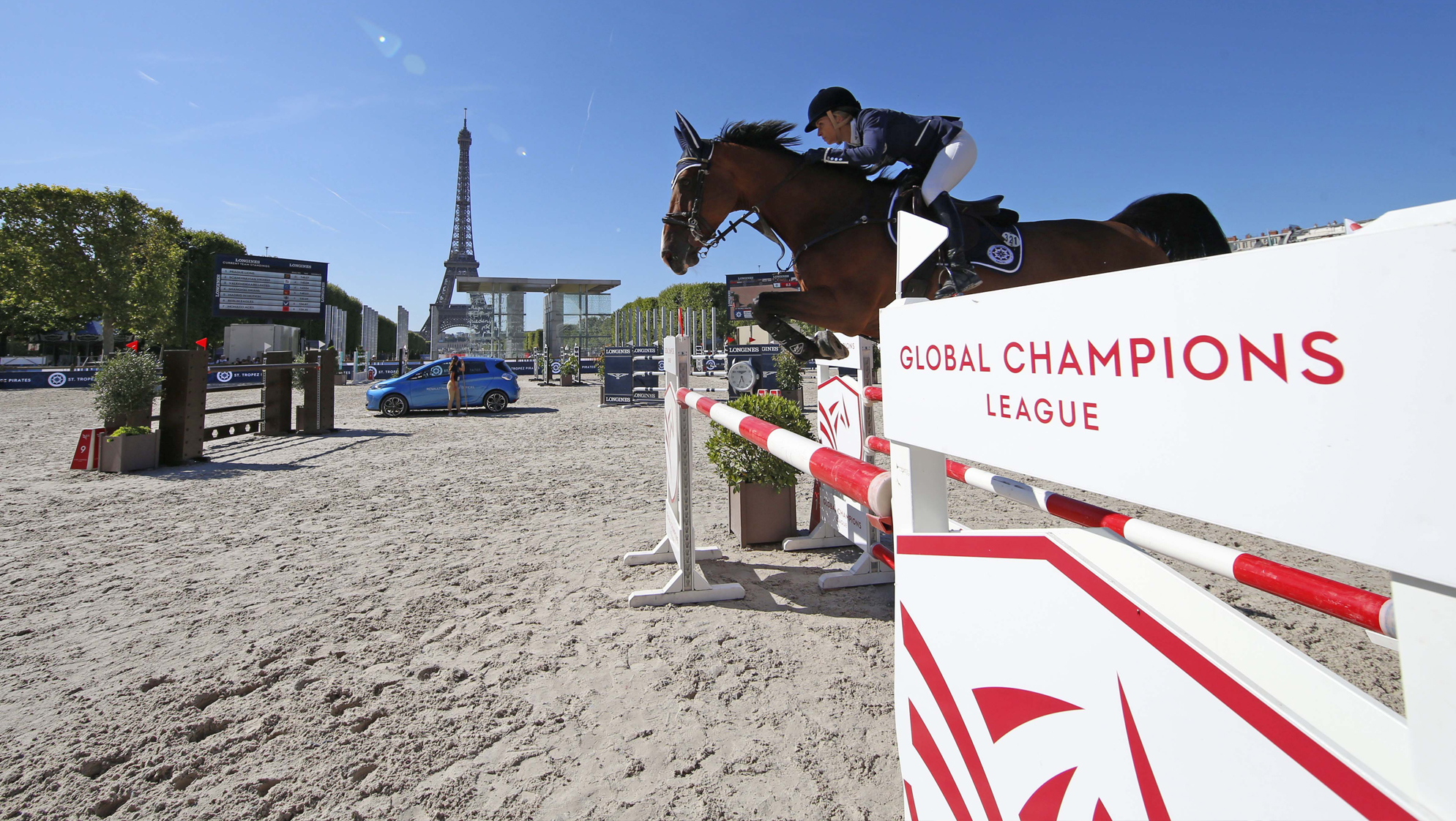 The Pirates pushed ahead of Miami Celtics’ duo of Jessica Springsteen and Shane Breen, with Prague Lions’ Marc Houtzager and Niels Bruynseels taking the third spot today as the final team with a zero score heading into Saturday’s showdown. A further 4 teams sit on 4 faults - just one fence away from the top spot - laying the foundations for an explosive conclusion in France’s capital city.

Pirates rider, Pieter Devos said: "I’m very happy the way my horses are jumping, they are jumping consistently and I have a nice string. We have a good team, and it’s nice we’re on the top, so we’ll hope to do the same tomorrow. It’s top sport at the highest level here, so we can expect a technical and tough course tomorrow.”

Teammate Edwina Tops-Alexander agreed the course was a technical challenge today: “There were a few options and tight turns, but you had to make your own plan - that’s what we did and it seemed to work!”

Set in the shadow of the Eiffel Tower, today marked the 11th round of action in the nail-biting 2019 Championship. Following the transfer window, team managers carefully selected their strikers for the first round of action in Paris, knowing a good result today will help set up teams for their chance of a maximum points haul tomorrow.

Valkenswaard United
First team to go Valkenswaard United brought out new recruit Edward Levy, the young Frenchman making his debut in the Championship. Edward brought out Rebeca LS, but there was dismay as the front rail of the LGCT oxer fell, the team dropping to a score of four faults. Cian O’Connor knew a strong result for the United team in Paris could help their charge up the overall rankings. He brought out relatively new grey mare, Irenice Horta, and the duo delivered, finishing clear and keeping the team on their score of 4.

Monaco Aces
Jerome Guery and Kel'Star du Vingt Ponts came short at the red and white oxer, quickly putting the team on a score of 4 faults. Julien Epaillard was looking for a strong result in front of a French crowd, but the first part of the double set down the VIP hospitality side came down, and the team would tumble to a score of 8 faults.

Prague Lions
First rider to go for the Lions Marc Houtzager set up the team up nicely with a foot-perfect clear aboard Sterrehof's Edinus. Niels Bruynseels had all the pressure on his shoulders to keep the team on a clear score and in with the best chance for Saturday’s showdown. Watched on by team manager Jessica Kurten, Niels piloted the springy Delux van T & L around the course, finishing clear and keeping the team on a zero score.

Berlin Eagles
Malin Baryard-Johnsson brought out one of her top mares for this leg of competition, with the fiery H&M Indiana attacking the course with her usual enthusiasm. But they changed their mind on the number of striders to the double along the VIP and the first vertical fell, before a followering liverpool oxer tumbled, dropping the team down to 8 faults overall. Lorenzo de Luca brought out Soory de l’Hallali, the flashy chestnut horse flying around the course to finish clear, keeping the team on their score of 8 today.

Scandinavian Vikings
Fresh from their win at GCL Monaco, the Vikings fielded Evelina Tovek with relatively new horse on the Championship Oz de Breve - and the duo kept their momentum, flying to a brilliant clear despite Evelina taking the wider, longer routes. Star striker Christian Ahlmann took up the mantle with the bay 14 year old mare Ailina. They looked en route for a clear until there was agony at the final fence, the pole falling late putting the team on a score of 4.

Madrid in Motion
Michael G Duffy and Lapuccino 2 took the longer routes around the track, adding strides as the team strategy looked for the riders to go clear. But they fell short of the time allowed, and the final fence tumbled too, putting the team onto a score of five. Maikel van der Vleuten brought out top stallion Verdi TN for the 11th competition in the 2019 GCL circuit. The experienced pair took the course in their stride, the 17 year old horse delivering to finish clear and keep the team score of 5.

Shanghai Swans
Overall ranking leaders, the Shanghai Swans were looking to stretch out their lead from the rest of the field. First to go for the team was anchor Daniel Deusser, the German rider bringing out the eye-catching grey and white Cornet. They had a lucky rub at the Longines double, just clipping the back rail but leaving it up to finish on a clean score. But there was disappointment after the Renault oxer fell for U25 rider Kim Emmen and Delvaux, and a costly time fault would put the Swans on a score of 5 so far.

St Tropez Pirates
Star striker Edwina Tops-Alexander fielded Veronese Teamjoy for the Parisian leg for the Championship, the 10 year old bay mare leaping powerfully around the course. They produced the goods, finishing clear and handing the baton to teammate Pieter Devos and Claire, a formidable line-up for the Pirates who show strong intent. Pieter guided his top bay mare beautifully around the arena, giving the scopey horse plenty of space and they too pulled out a clear - the combined time of Edwina and Pieter catapulting the Pirates to the top of the leaderboard so far.

Doha Falcons
An early fault at the red and white oxer for Michael Whitaker and Strides Hilanasterne would put the Falcons on the back foot. Another at the VIP situated double and an agonising time fault would put them on 9 with teammate Jur Vrieling plenty to do to keep the Falcons afloat. Jur would opt to ride his bay 11 year old horse Davall, but another early fault and a time fault too would see the team plummet to 14 overall.

London Knights
U25 rider and team owner Emily Moffitt would bring out top 10 year old gelding Winning Good. The keen horse powered to the fences, covering the ground speedily but was managed brilliantly by Emily to keep his control and focus. But as they rounded out to the final line, they took an extra stride and got too close to the RMC liverpool - the front pole falling and putting the team on 4. Teammate Martin Fuchs brought out his 11 year old The Sinner and they proved what a strong partnership they were forming - the pair finishing clear to keep the team on 4 heading into Saturday.

Hamburg Giants
Bart Bles and Gin D of the Giants were first to take on the challenge in Paris, the grey horse eating up the ground with his huge stride. But the metro vertical fell, unsettling the horse and there was drama at the first part of the Massimo Dutti double which followed immediately after, Bart doing well to keep his seat after a miscommunication. They regained composure to jump the double, but the final oxer tumbled too, with time faults added plummeting the team down to 18 overall. Simon Delestre and Filou Carlo Zimequest set off with determination, but the troublesome first part of the lamp-post flanked double fell, the team finishing today on a score of 22.

Cannes Stars
The Cannes Stars brought out Abdel Saïd with Jumpy van de Hermitage for the first of their two riders, but they came down a little soon on the backrail of the Longines double, putting the Stars on a score of 4. Karel Cox piloted his 9 year old gelding Kill Bill Max, but the back rail of the LGCT oxer fell, as did the second part of the Massimo Dutti double after they came in a little deep, the team finishing on a score of 8.

New York Empire
Daniel Bluman piloted his 9 year old bay mare Colestina H, the horse giving the fences plenty of air in their effort to clear the challenges. But they punched out the front rail of the brown tree-lined oxer, the team falling to 4 faults. Teammate Scott Brash brought out Hello Mr President, the enthusiastic and talented 10 year old springing from the footing. Scott dared the gelding to the fences, and they pulled off a remarkable clear, a round of applause of appreciation from the watching crowd.

Miami Celtics
The Miami Celtics brought out the big guns with Jessica Springsteen and Shane Breen. First to go was Jessica with RMF Zecilie, the 12 year old bay mare flying beautifully around the arena. They rattled the final fence, but it stayed in the cup and they produced the clear, passing the pressure to teammate Shane. He opted to ride Ipswich van de Wolfsakker, the chestnut gelding responding admirably to his rider’s request. They too finished clear, but were just a couple of seconds slower than the Pirates, slipping into second so far.

Chantilly Pegasus
Roger-Yves Bost of the Pegasus team had heartache at the first after Sunshine du Phare kicked out the inital fence, the GCL oxer. The back rail of the tree-lined oxer fell too, the team already on 8 faults with the second rider yet to go. Rene Lopez was next to take up the mantle with Twig du Veillon, knowing only a clean result to keep them in touch for tomorrow’s showdown. They produced a clear, and the Chantilly Pegasus team would finish on 8.

Paris Panthers
Home city team the Panthers were in prime position as last to go, and Gregory Wathelet and Nayel Nassar were hoping for a boost from the local fans. First up with Gregory with Picobello Full House Ter Linden Z, and despite the enormous pressure they brought home a clear, with team manager Rob Hoekstra watching from the kiss n’ cry. Next to go was Nayel, this time bringing out the charismatic Lucifer V for this round of action. But the GC Prague Playoffs plank fell, the team tumbling to 4. There was further heartache as the first part of the Massimo Dutti double came down, the team dropping to a score of 8.

So the Pirates would take pole position today, and will be the final team to compete in tomorrow's showdown. The action kicks off at 15:40 local time via GC TV, with the LGCT Grand Prix of Paris at 19:15.