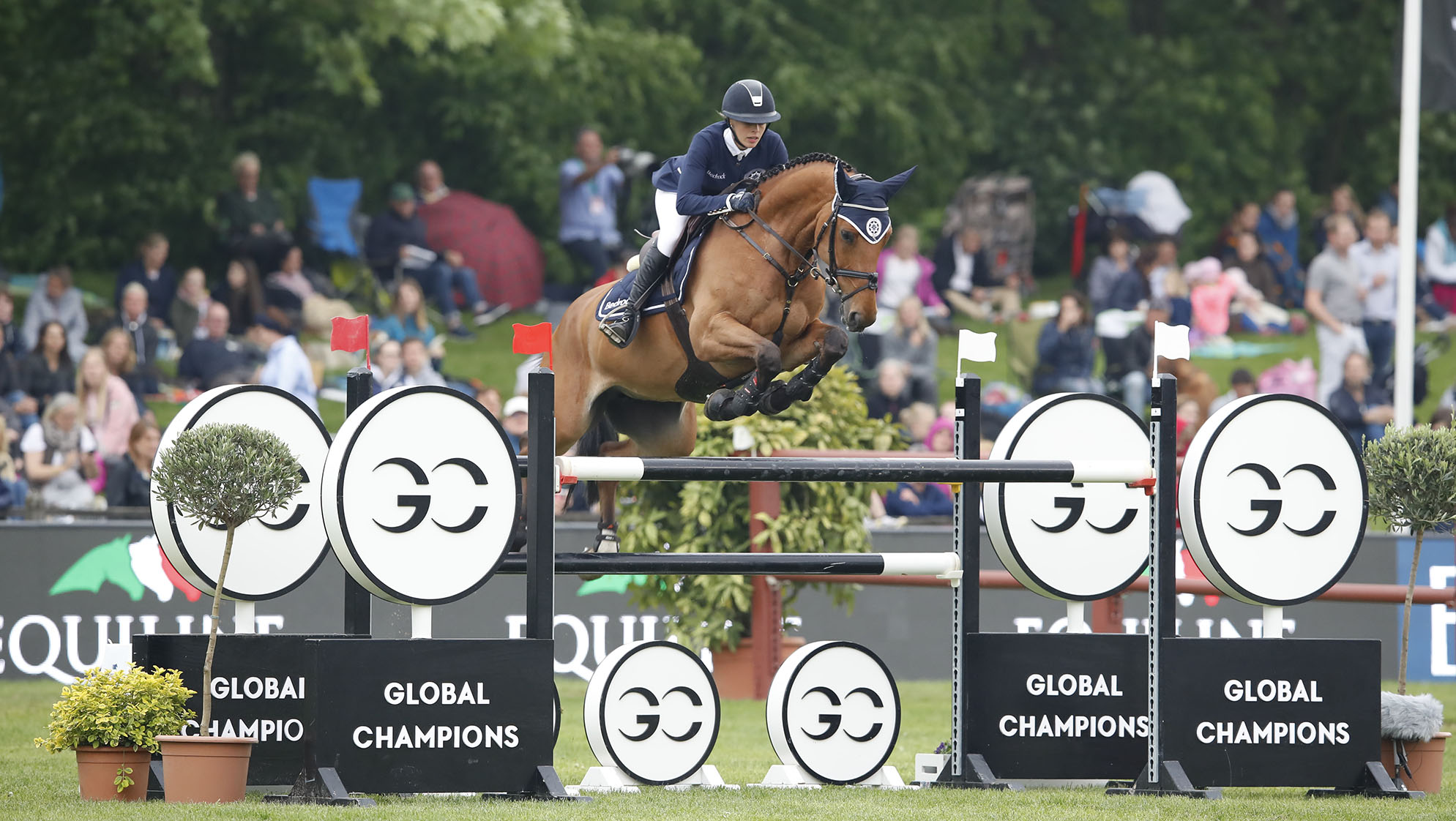 Laura Klaphake and Pieter Devos of the St Tropez Pirates took the helm in a knife-edge GCL Hamburg, after today's first round saw 12 teams finish all within six faults of each other.

With time a significant factor in today’s prelude to Saturday’s showdown, the St Tropez Pirates claimed their first pole position of the season with a double clear, just ahead of Berlin Eagles’ Ludger Beerbaum and Philipp Weishaupt and Shanghai Swans’ Shane Sweetnam and Pius Schwizer.

There is a potential shakeup in the overall rankings, after current leaders London Knights finished in an unexpected 16th place today. With a strong result on Saturday, closest rivals Valkenswaard United and Berlin Eagles could edge closer to the Championship lead, but with every place receiving points, the final order in Saturday’s showdown will be crucial.

The 19 GCL teams tackled course designer Frank Rothenberger’s track over Hamburg’s Derby field turf, and while plenty of riders went clear individually, only two teams managed the elusive double clear. With 15 jumping efforts and a maximum time allowed of 79 seconds, both time and rolling poles proved hugely influential in this speed class. Rothenberger used the full scope of the huge arena, mixing long distances between fences with holding strides, meaning total control and one eye on the clock would be the order of the day.

Fast clears inside the time from U25 star Laura Klaphake with Catch Me If You Can and Pieter Devos with Claire Z, both riding 10-year-old horses, mean their St Tropez Pirates team sits atop the podium overnight and will be in pole position heading into Saturday’s second round.

U25 rider Klaphake was the pathfinder for the team. “I was so happy with my horse,” said the 24-year-old German rider. “We gave our best and it worked out, so that was really cool.”

The 32-year-old Belgian rider Devos rode Claire Z, a Zangersheide mare by Clearway. Although a zero score gives the St Tropez Pirates the best overnight score of the season so far, he is by no means complacent as the stakes are ramped up in Saturday’s decider.

“It’s only after the first round and we have not won yet,” he said. “There is still a lot to come and the result is very close with the other teams so we still have to concentrate. I’m going to convince Laura that she rides on Saturday because she jumped fantastically.”

The huge grass ring contains not only the GCL jumps, but also the permanent fences used in the Hamburg Derby and drew a knowledgable crowd for the first day of CSI5* competition. Known as the “Gateway to the World”, this weekend also marks the 829th “Port Anniversary” in Germany’s popular city, welcoming hundreds of thousands of visitors to the area - many of whom will also be visiting the show for a weekend of top sporting action.

Local fans had plenty to cheer for today, following a great result for the Berlin Eagles. Drawn second to go and consisting of German riders Ludger Beerbaum and Philipp Weishaupt, the team pulled out all the stops with their talented mares, putting in foot perfect clears to shoot to the top of the leaderboard for the majority of the class. However they were toppled from the top spot after their combined time was just over a second slower than St Tropez Pirates, but are still in a strong position with everything to play for.

Beerbaum's horse Chiara is a hugely experienced 15-year-old mare, owned by Madeleine Winter-Schulze, and the German favourite — who has stellar form in this arena in front of his home crowd, having won both the LGCT Grand Prix and the Hamburg Derby in recent years — attributed Chiara’s experience to his commanding clear.

“It’s nice to ride a horse with so much experience in that ring,” said the 54-year-old former World Number One. “It’s an advantage to have an experienced horse because it’s spooky in there.”

Not one to be complacent ahead of Saturday’s showdown, the five-time Olympic medallist added: “It’s great to be in this position, but it’s like in a football match if after 15 minutes you’re leading one-nil.”

His team-mate Philipp Weishaupt, who is from the same stable, followed his mentor's impressive clear on the 11-year-old Selle Français Asathir, by Diamant De Semilly, giving the Berlin Eagles a chance at their first podium place of the season.

The Shanghai Swans (Shane Sweetnam and Pius Schwizer) are lying in third as the fastest of the three teams who all recorded a single time fault. Valkenswaard United (Jur Vrieling and Maurice Tebbel) and Madrid in Motion (Maikel van der Vleuten and Michael G Duffy) lie in fourth and fifth, with Cannes Stars (Sergio Alvarez Moya and Karel Cox) in sixth — the only team to finish on four faults. The next four teams all recorded one fence down and a time-fault to finish on five penalties; it’s an exceptionally tight field in Germany.

Team tactics will be crucial going into Saturday’s final, with teams having to decide which riders on their rostrum to put forward for the GCL Hamburg final. With the faults so close, and 12 teams within a pole of each other, the action promises to be an intense showcase of top sport, which will come right down to the wire.

The GCL Hamburg final will kick off on Saturday 12th May at 12:15 local time, with all the action streamed live via GC TV around the world.

In the individual session of the GCL, top honours went to Belgian Nicola Philippaerts whose blistering round on the much-admired H&M Harley VD Bisschop was the only one to break the beam in under 70 seconds. He picked up the hefty winner’s prize of €59,000 as well as a Mercedes C Class car.