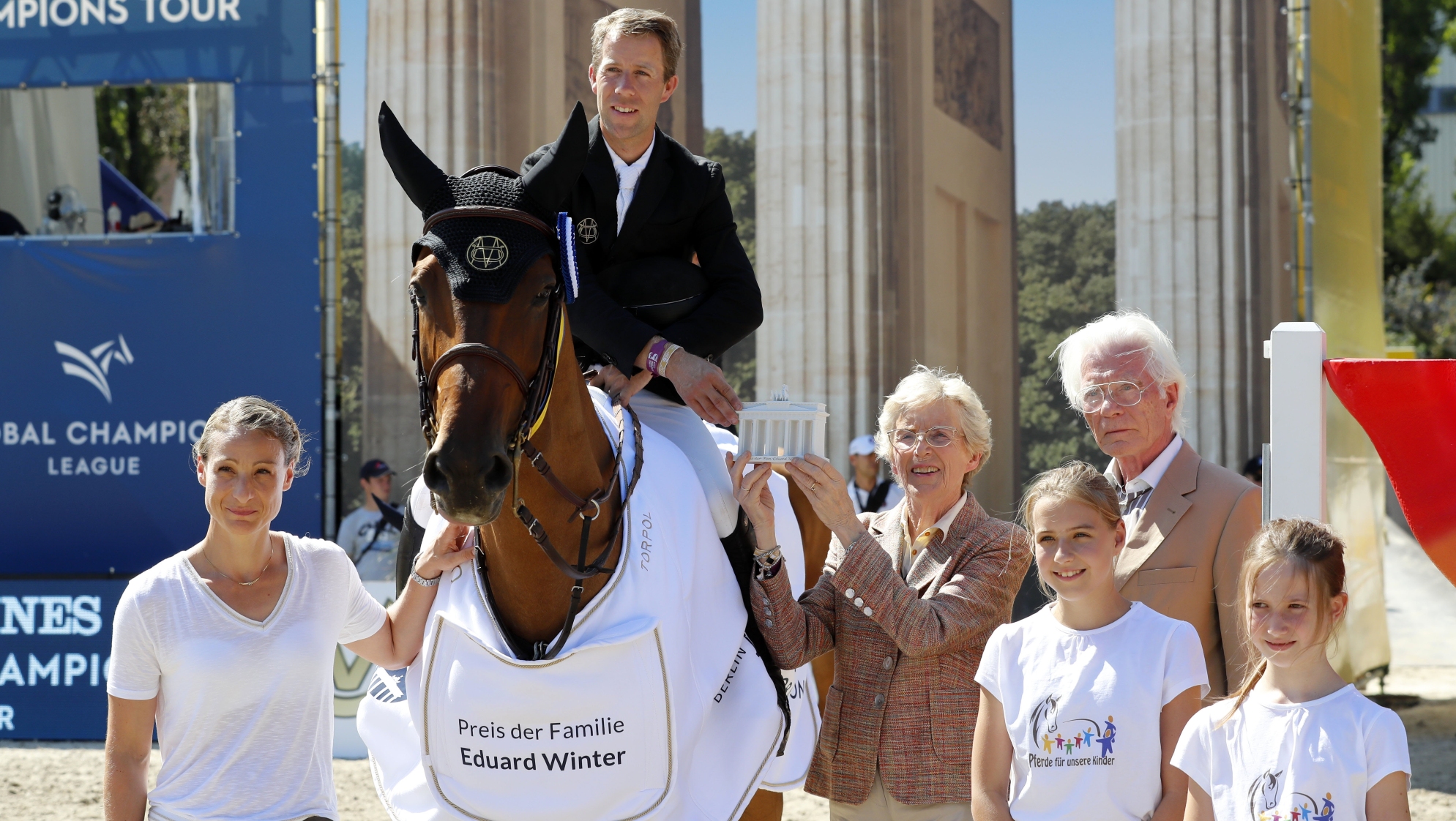 A delighted van der Vleuten said: “Arera is a horse with a lot of experience, of course, I used her experience the second phase, she was focusing on every turn - that helped me a lot. Kent had a smooth second phase and a naturally fast horse, but I tried to make a good plan for myself and my horse and it was just quick enough. I could leave a couple of strides out and Arera has a big step so I could really use her canter in the longer lines."

The Dutchman finished just a split second faster than Farrington (USA) who had led through most of the class and third place was taken by the equally swift Italian rider Emanuele Gaudiano (ITA).

German course designer Frank Rothenberger put together a tricky but fair 1.45m course for the first CSI5* class of LGCT Berlin with the bogey fences being the wide Tennor oxer. Forty-four combinations came forward to tackle the two-phase competition but only 11 managed to finish on a score of 0 faults. Among those were……

First to go was Markus Brinkmann (GER) on Light Fly Lady, he finished inside the time but had an early fault in the second phase putting him out of contention for the win straight away.

Famously fast combination of Julien Epillard (FRA) and Queeletta looked like they were going to set a time to beat but the last fence dramatically fell leaving him as one of the fastest four faulters. The first double clear was produced by Kent Farrington (USA) and Austria 2 in a time of 32.39. The pair added an extra stride to the last but flew into the lead putting the pressure on the rest of the field.

Irishman Michael G Duffy (IRS) picked up just one time fault on Lapuccino 2 - who he is saving for the bigger classes this weekend. Christian Kukuk (GER) was the first to not make it through to the second phase as he rolled the first rail on a wide oxer at with his grey stallion Colestrus.

Last year’s winner of this class Emanuele Gaudiano (ITA) easily cruised around and crossed the finish line in 32.48 seconds just one-tenth of a second slower than the leading time on Kingston van het Eikenhof. The next rider to put the pressure on was Marlon Modolo Zanotelli (ITA) with his 12-year-old mare Handy van HD. They couldn’t quite match the pace and finished in a time of 33.14 seconds.

Georgina Bloomberg (USA) put the pedal to the metal on her beautiful grey Cessna 24.  They rode a speedy clear and finished in sixth. There was drama when Argelith Squid slammed on the breaks with Bassem Hassan (QAT) twice in the second phase causing them to get eliminated. Unusually Harrie Smolders (NED) and Don VHP Z had an early fence down but they will be back fighting hard over the rest of the weekend. Home hero Daniel Deusser (GER) produced a beautiful clear with the very experienced grey Cornet in a time of 34.77 seconds to place just outside of the top 5.

The Netherlands finally took over the lead from long-time leader Farrington as Maikel van der Vleuten (NED) soared over the final fence with room to spare and finished in 32.05 seconds - two-tenths of a second faster on his 14-year-old Arera C.

So it was Maikel van der Vleuten who took the first win of the weekend. Looking ahead to tomorrow make sure you tune in to GC TV on our website to watch GCL Berlin final and the LGCT Grand Prix of Berlin live and for free.