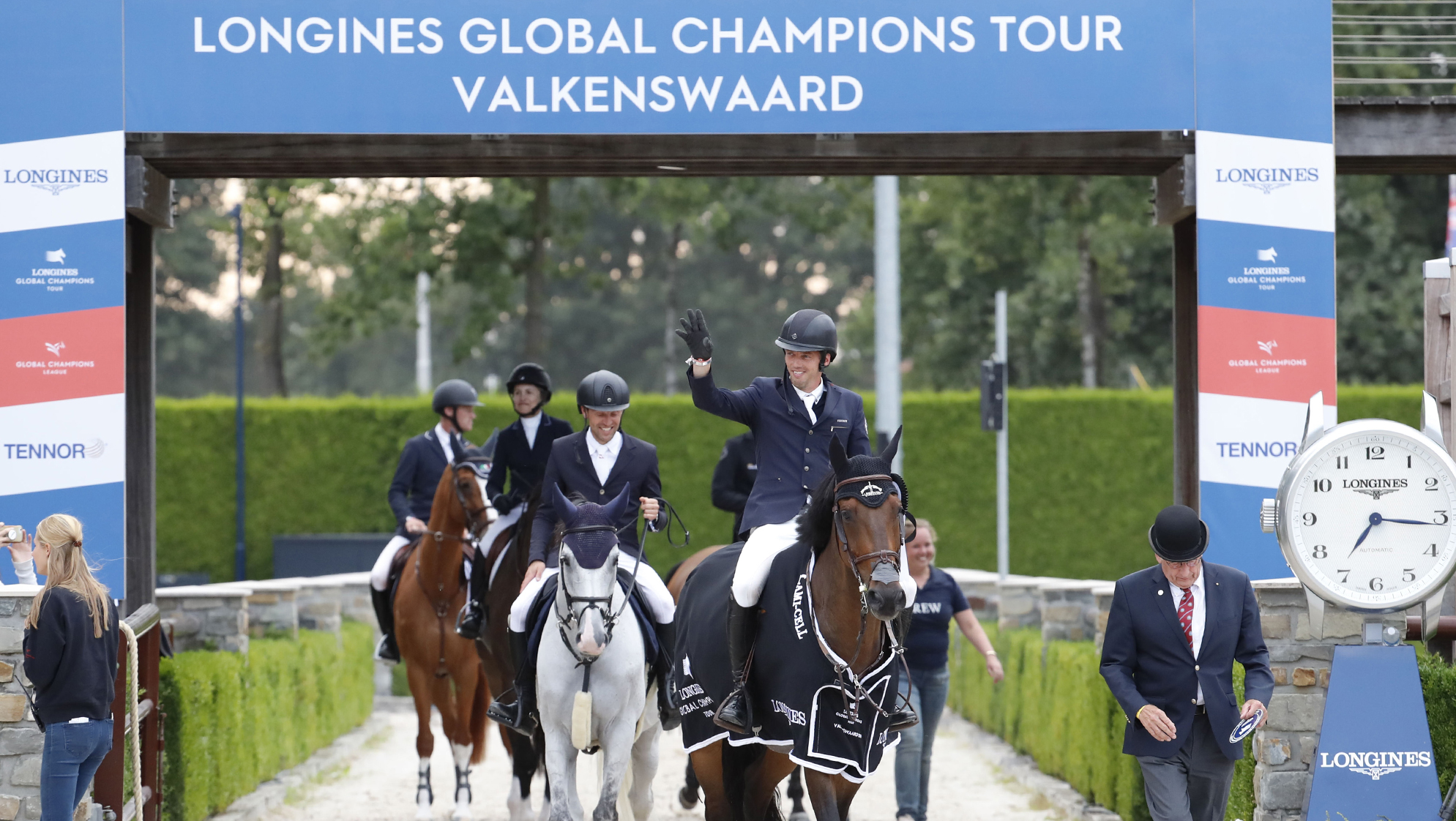 Harrie Smolders (NED) and his "rockstar" Cas 2 delivered the second Dutch victory of the weekend, closing off a phenomenal event full to the brim of top sport during the Longines Global Champions Tour of Valkenswaard.

Harrie spoke after his win: “It’s always a great feeling to win on home turf, and to close the weekend with a victory like this is super, particularly with my family being here today. I’m very grateful to have so many people cheering me on today - the Dutch spectators are like no other! There were some impressive combinations in this class, and with some strong contenders in the jump-off I knew it wouldn’t be easy. But Cas is such a rockstar, he jumps his heart out for me every time and is naturally quick - it’s a win he really deserved today.”

Speaking about the first class facilities at the Tops International Arena, he said: “It’s such a pleasure to jump in such an amazing facility as this - it’s designed for the horses and they are really able to perform at their best here. LGCT Valkenswaard has to be one of the best shows.”

As the Dutch national anthem rang out for the final time this weekend, the curtains closed on what’s been a spectacular weekend of top sport and entertainment.

The final CSI5* class of the weekend saw 42 international starters take to Uliano Vezzani’s track, which included a wide Tennor oxer underlined with short green hedges before a formidable but delicate triple combination. A Longines plank followed a 180 turn after the delicate bicycle fence, with a big final line finishing with a wide Stal Tops oxer. The time allowed was extended to 77 seconds after the first rider, and it would become a hotly contested class to see who could bring home the lion’s share of the prize money.

Pathfinder Jérôme Guery (BEL) was first to take on the challenge, with his black 10-year-old gelding Kel'Star du Vingt Ponts and the Belgian rider carefully guided his horse around the arena. They added strides wherever possible and finished as the first clear of the day.

Next to follow Alberto Zorzi (ITA) - who is based at the magnificent Tops International Arena - took on the track with his 12-year-old bay stallion Cinsey. They too added strides, securing themselves the clear and creating a jump-off. Niels Bruynseels (BEL) and Ilusionata van't Meulenhof soon followed suit, as did Christian Kukuk (GER) with his eye-catching grey stallion Colestus, before Christophe Vanderhasselt (BEL) immediately added his name to the line up with Identity Vitseroel.

Henrik von Eckermann (SWE) came undone down the final line with Que Bueno de Hus Z, the penultimate fence falling along with his hopes of a win today. One of the hot favourites Leopold van Asten (NED) had trouble in the triple combination with VDL Groep Miss Untouchable while the third fence fell for the combination who won this morning's speed class Julien Epaillard (FRA) and Alibi de la Roque.

It was another clear from Simon Delestre (FRA) and Filou Carlo Zimequest as they came home easily inside the time. Dutch hopes were raised after Harrie Smolders (NED) and Cas 2 soared round clear, adding their names to the illustrious line-up.

LGCT ranking leader Pieter Devos (BEL) has often won the Sunday 1.55m class, however today opted to retire Espoir when two poles fell, knowing he wasn’t going to make it through to the jump-off. Compatriot Nicola Philippaerts (BEL) also had three fences down with Camargo 2, the pair leaving the ring in disappointment and with no shot of glory today.

But local fans were thrilled when another Dutch rider added his name to the jump-off after Gerben Morsink (NED) and Navarone Z delivered a flawless clear - Morsink punching the air in delight as he could be in with a chance of a win today.

There was drama after Max Kuher (AUT) and Cornet Kalua parted company coming round to the second fence, the 14-year-old horse just napping back to the in-gate and unexpectedly unseating the Austrian rider who landed smartly on his feet, before smoothly re-mounting to ride out of the ring following their elimination.

There was a shock refusal from Gregory Wathelet (BEL) and the 11-year-old stallion Iron Man van de Padenborre at the unusual looking bicycle fence, the horse just putting on the brakes as they approached the fence. Marco Kutscher (GER) also elected to retire with Casallvano, after they had a couple of fences down, as did Ludger Beerbaum (GER) with Casello.

But there would be some impressive names to make it through to the jump-off with Margie Goldstein-Engle (USA) and Dicas, Marc Houtzager (NED) with Sterrehof's Dante, Kevin Staut (FRA) with Urhelia Lutterbach, Jos Verlooy (BEL) with Varoune and Daniel Deusser (GER) with Killer Queen VDM all vying for the win today.

First to return, Jérôme Guery (BEL) and Kel'Star du Vingt Ponts set off at a gallop, powering between fences one and two, and taking the third and fourth at an angle. But it was a touch too much as they came to the double, punching out the first fence and ducking out of the second.

Alberto Zorzi (ITA) and Cinsey took a brave angle to the fourth fence but it came down, dropping them out of a chance of the win today.

Niels Bruynseels (BEL) and Ilusionata van't Meulenhof went for a steadier pace, but picked up the tempo in the gallop to the last. They flew over the Stal Tops oxer, stopping the clock in 43.08s to throw down the gauntlet to the rest of the field.

Christian Kukuk (GER) was another rider to take the angle to LGCT oxer a touch too tight, and unusually the 13-year-old grey stallion slammed on the brakes at the final moment. Christophe Vanderhasselt (BEL) and Identity Vitseroel blazed around the arena, the bay mare jumping her heart out for the Belgian rider. But the first part of the double came down, and they had to settle for four faults, despite being over two seconds faster than Bruynseels.

Flying Frenchman Simon Delestre (FRA) gave Filou Carlo Zimequest the smoothest of rides, the small grey gelding rocketing around the arena. They knocked an impressive two seconds off the time to beat to take the lead in 40.71s.

Dutch hopes soared as Harrie Smolders (NED) and Cas 2 sped around the arena, the naturally quick horse eating up the ground with his larger strides. The crowd roared as they galloped through the finish gates, taking almost a second off Delestre’s time to take over the lead and finish in 39.80s.

Margie Goldstien-Engle (USA) gave it a brave try with Dicas, but the larger horse was not as nimble in the turns. They flew home clear but had to settle for a time of 41.54s. Gerben Morsink (NED) and Navarone Z also took a brave shot to the last, but it fell, as did their hopes of a top three finish today.

There was disappointment for Marc Houtzager (NED) and Sterrehof's Dante as the second fence fell, and despite their best efforts Kevin Staut (FRA) and Urhelia Lutterbach also brought down two fences.

The pressure was on for penultimate rider Jos Verlooy (BEL), the young rider hoping to do the double after winning this class at LGCT London just last Sunday. With a different horse from last week, Varoune, they attacked the course, but changed their mind on strides to the second oxer, opting for the extra one. It cost them time, and although they finished clear they had to settle for a time of 41.60s.

Final rider to go Daniel Deusser (GER) had the benefit of watching the rest of the field, and looked around the course with steely focus. But he and Killer Queen VDM just clipped a pole, handing the win to Harrie Smolders on home turf this afternoon.

The Championship looks to Rome, Italy, for the 16th round of action in the 2019 Longines Global Champions Tour season.