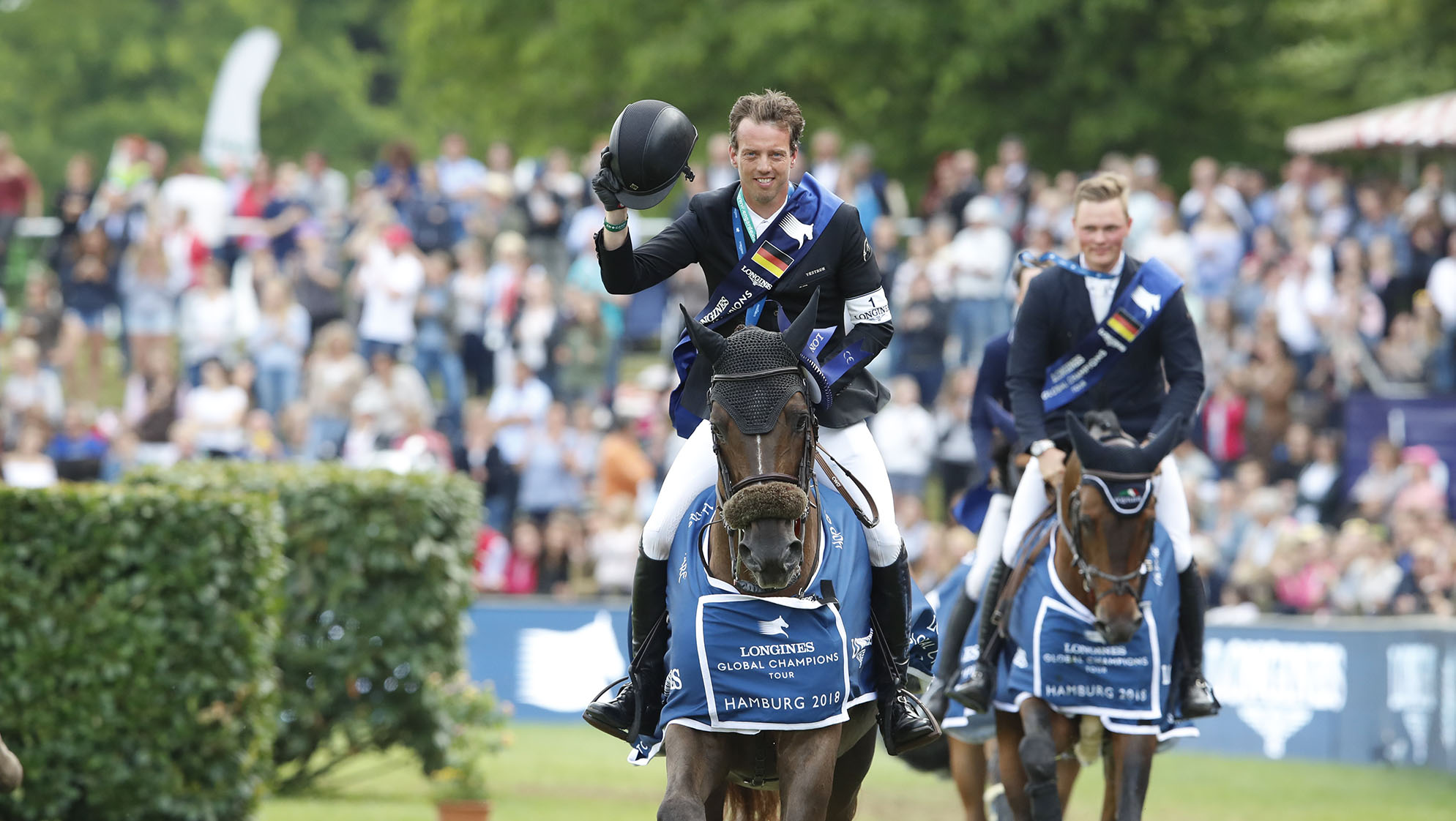 Thousands of passionate and knowledgeable spectators headed to the sun-bathed grass arena provided the perfect backdrop for the thrilling finish to the LGCT Hamburg weekend, with families and fans treated to a sensational showdown featuring the very best horses and riders in the world at this, the fifth leg of the Championship race.

Coming into this class, only Edwina Tops-Alexander (AUS), ranked third, and Pieter Devos (BEL) in fifth overall could dethrone the current series leaders, British riders Scott Brash and Ben Maher. But neither Tops-Alexander nor Devos could qualify for the jump-off today to overtake the lead, meaning Brash would keep hold of reins in the LGCT Championship race.

However, Tops-Alexander’s performances in Hamburg were good enough to boost her up into second, now just 12 points behind Brash, with both hungry for a historic third LGCT Championship title to add to their accolades.

Aside from Dutchman Harrie Smolders’ superb performances, the only other rider who managed a double clear was last-to-go Germany’s Maurice Tebbel and the Westfalian stallion Chacco’s Son, by Chacco-Blue, who finished in second after he was unable to catch the deceptively fast leading pair who posted a time of 37.97s to Tebbel’s 39.14s. Third went to the fastest four-faulter in the jump-off, Switzerland’s Martin Fuchs (SUI) with Chaplin, who clocked the quickest time of all — 37.69 seconds — but knocked out the second part of the double.

Seven combinations qualified through to the jump-off with clears inside the time from the 35 starters over another inspired Frank Rothenberger-designed course. Smolders' ride, the 14-year-old Don VHP Z, has been a regular podium placer and is arguably one of most consistent showjumping horses in the world. The alchemy of the superb 14-year-old Zangersheide stallion son of Diamant De Semilly and the 2017 series winner Smolders was unbeatable today.

Second to jump of the seven in the second round, Smolders took his time from the first to the second fence, allowing him to turn back super-tightly to the third — a tricky orange plank fence by the arena’s edge that caused problems in both rounds. Once Don VHP Z was safely over it, Smolders galloped the rest of the course, trusting the horse to clear the enormous fences at top speed, with the incredible round watched by delighted owners, Jim and Penny Coulter.

On his tactics, Smolders said: “I wanted to catch my strides in the next turn, from two to three, so I went really wide from one to two so I could do six forward strides to the next — that’s where I caught my time.

“We knew that Don VHP Z would like this ring very much — he always jumps very well here and we are happy he showed his great form today. We also had a jump-off that suited him very well. He normally doesn’t win so many classes, but I knew I had a shot. He’s a very efficient jumper and I have to be aware that I use his energy efficiently, but he’s so consistent and he keeps jumping clears in 1.60m classes.”

First to tackle the jump-off track was Jos Verlooy whose mount Caracas, who is a son of Casall, touched the planks but then punched out the penultimate fence, a big blue oxer to finish on four faults. It was then Smolders’ clear that put major pressure on the remaining five riders and caused forced errors all over the course.

But it would be Smolders’ day, with the flying Dutchman sealing the victory and a golden ticket to the GC Prague Play Offs where he will contest the Longines Global Champions Super Grand Prix. Alongside him is an already stellar line-up of Scott Brash (GBR), Edwina Tops-Alexander (AUS), Gregory Wathelet (BEL) and Ben Maher (GBR), with all eyes looking to Round 6 of the Championship race - Ramatuelle, St Tropez.

Jan Tops, President LGCT: "It was an amazing jump off especially how Harrie rode, with his jump off so smooth. From two to three he does one or two strides less than everyone else, he is amazingly consistent. Also it is now good to see Harried qualified for the (Longines Global Champions) Super Grand Prix in Prague.  Every winner of each leg qualifies for the Super Grand Prix. It is a very prestigious class and now he is part of it with four other great riders that are qualified. We are only in the 5th leg, another 11 to go and anything can happen, but we have fantastic combinations and they all want to win the Title."

Volker Wulff, Engarde Marketing: "We have the top stars here and it is a very good symmetry between Longines Global Champions Tour and the Derby. It is a good combination."

Martin Fuchs (SUI), third place: “I had a good starting position being second last in the Grand Prix so I got to watch the riders before me. I saw that Harrie was very quick and my horse is naturally very fast but I knew that I had to take all the risks and maybe I came a bit too fast into the combination - it got very short in between and he had a light touch in front, but I am still very happy with third place. It’s just the second big show back for Chaplin after an injury, and he is as great as he was before and I’m really happy that he is back.

"I want to win everywhere I go, especially places like this here in Hamburg. It’s definitely a dream of mine to win here in front of this crowd, so I was for a few minutes a little disappointed that it wasn’t a victory today, but actually I am very happy with third place and Harrie was just the best today.”

Maurice Tebbel (GER), second place: "I was thinking about the fact that there was only one clear round, so I took a lot of risk and I knew Harrie was very fast — he’s a very fast rider — so I am happy about the second place. I knew that there was only one clear so I tried to be clear to get second for sure. It was an unbelievable day for me today. To win the first class with my nine-year-old stallion and then I changed my horse and he jumped amazing, so it was a very good day for me today. I was lucky that I changed.”

Harrie Smolders (NED), first place: “[Don VHP Z] is very consistent on this level. When I walked the course for the first round it looked tough so that was in our advantage at the moment. And I know he loves this place — he was second the last two years — and with seven in the jump-off I had a good shot and with this jump-off it suited him. I could make the right angles and his scope made the difference today. For sure it’s always possible to go faster, like Martin showed, and with Maurice at the end I knew there were very fast combinations who are young and hungry still to come so I was definitely not sure, but I thought a podium place was possible.

“I’m very pleased that I am qualified [for the Longines Global Champions Super Grand Prix]. My horses are probably not the real winners, but they are very consistent and today was one of the few chances for me to win one [of the qualifiers] and I had that feeling and the scenario went like I wanted. I am very pleased with that. I only did two Globals so far, but we will for sure be there at St Tropez and Cannes and hopefully we can climb up the leaderboard.”