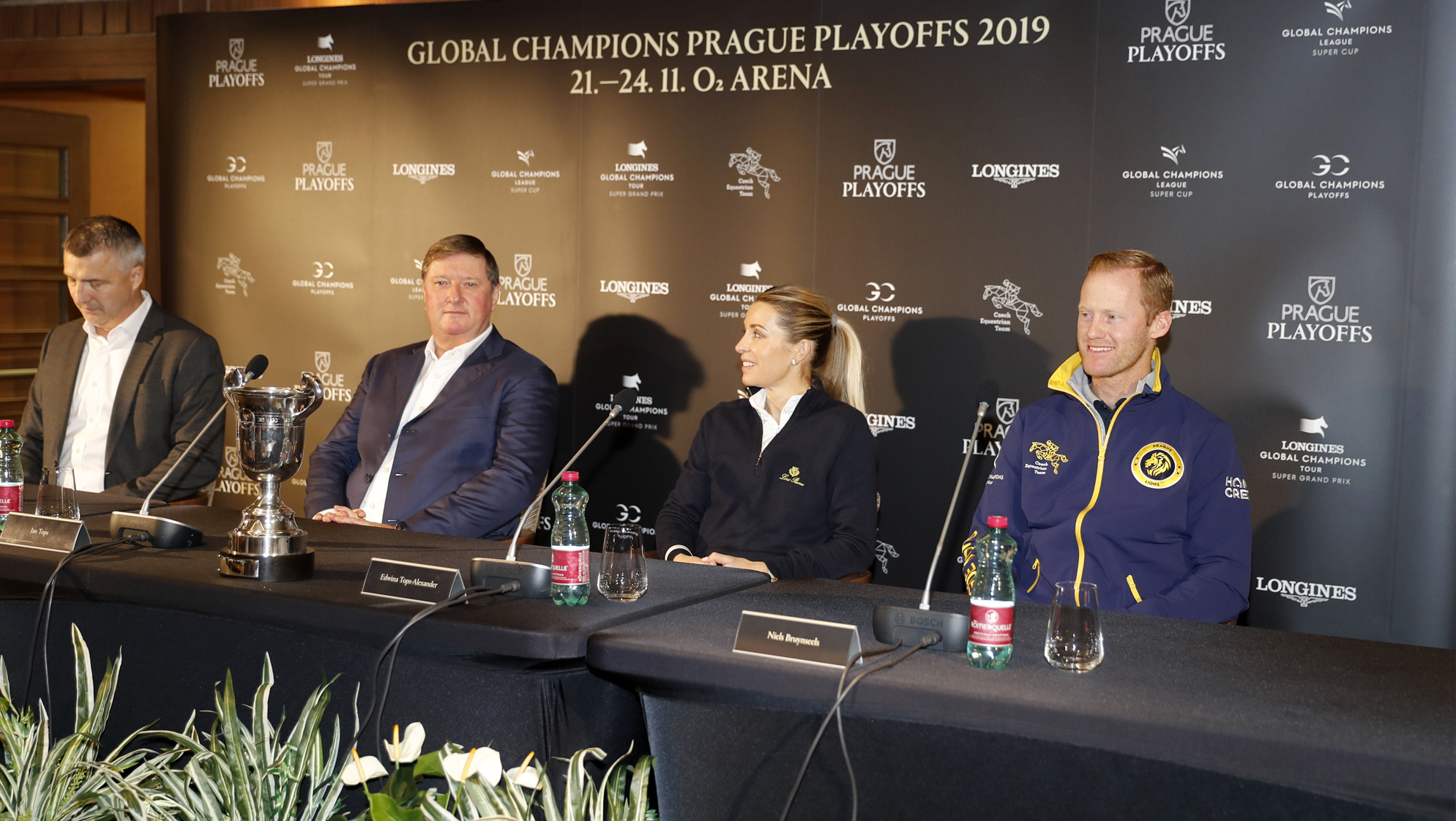 The spectacular 2019 GC Prague Playoffs have officially been declared open today, with last year’s Longines Global Champions Tour Super Grand Prix winner Edwina Tops-Alexander revealing: "I’ve ridden in many, many competitions throughout my life but I never had that kind of feeling as I did after winning in Prague.”

Excitement and anticipation has been building for the second edition of the GC Prague Playoffs, which kicks off tomorrow, Thursday 21 November, with the GCL Super Cup Quarter Finals.

Speaking today in a pre-event press conference to officially launch the event, Jan Tops, President and Founder of the Longines Global Champions Tour and GCL said: “We are very happy to be back here after a successful first edition. Everyone had a great impression in our equestrian world, and outside - it was a milestone. It’s with thanks to Jan Andrlik’s team and the family Kellnerova, and we made something unique for our sport.”

Last year Edwina Tops-Alexander lifted the trophy in a dramatic Longines Global Champions Tour Super Grand Prix, etching her name into the history books as the first ever winner of the prestigious prize. Speaking in the press conference she recollected the competition which had the crowds on their feet in excitement: “It’s a great memory, one I’ll have forever and it’s definitely one of my greatest achievements ever. As a competitor it’s always nice to win amongst the best in the world, and the atmosphere here was completely incredible.”

GC Prague Playoffs Event Director Jan Andrlik said: “For the second edition of our event we are preparing an entertainment program for audiences of all ages. It will be an original show, a celebration of extraordinary performances of people and horses. In addition to the performances of individual artists, the event will be accompanied by a large number of different audiovisual artistic inputs, including a spectacular Thursday Opening Ceremony with the introduction of all teams."

Talking about the anticipation ahead of this week’s event Edwina said: "I’m really happy to be back here again. I don’t know how, but I’m sure it’s probably going to be even more exciting this year. Since last year everyone’s talking about coming to Prague, competing or watching.”

Jan agreed that the atmosphere was second to none, making the vast arena feel intimate and electric during the competition: "It was the whole picture that made the event so special. The shows were different, the atmosphere from the stadium - we had great public every night who were really into it. Combined with the best athletes and horses, jumping for this kind of prize money, adds extra excitement and drama. All the elements made the event very special last year."

Niels Bruynseels, who will be competing for the home city team the Prague Lions as well as in the LGCT Super Grand Prix this year, said: “It’s a very special feeling. Not only for me but for my team members as well it’s a special feeling jumping for a home crowd. We start tomorrow with the first day - our horses are really fit, we have very good riders and I hope we can give everything for the Prague Lions this week.”

This afternoon saw a warm up for the international field, giving the horses a chance to see the arena for the first time this year and flex their muscles in Prague. Tomorrow’s first CSI5* competition will start at 15:00 local time with the GCL Super Cup Quarter finals starting at 20:00 local time. All the action will be streamed live on GC TV.