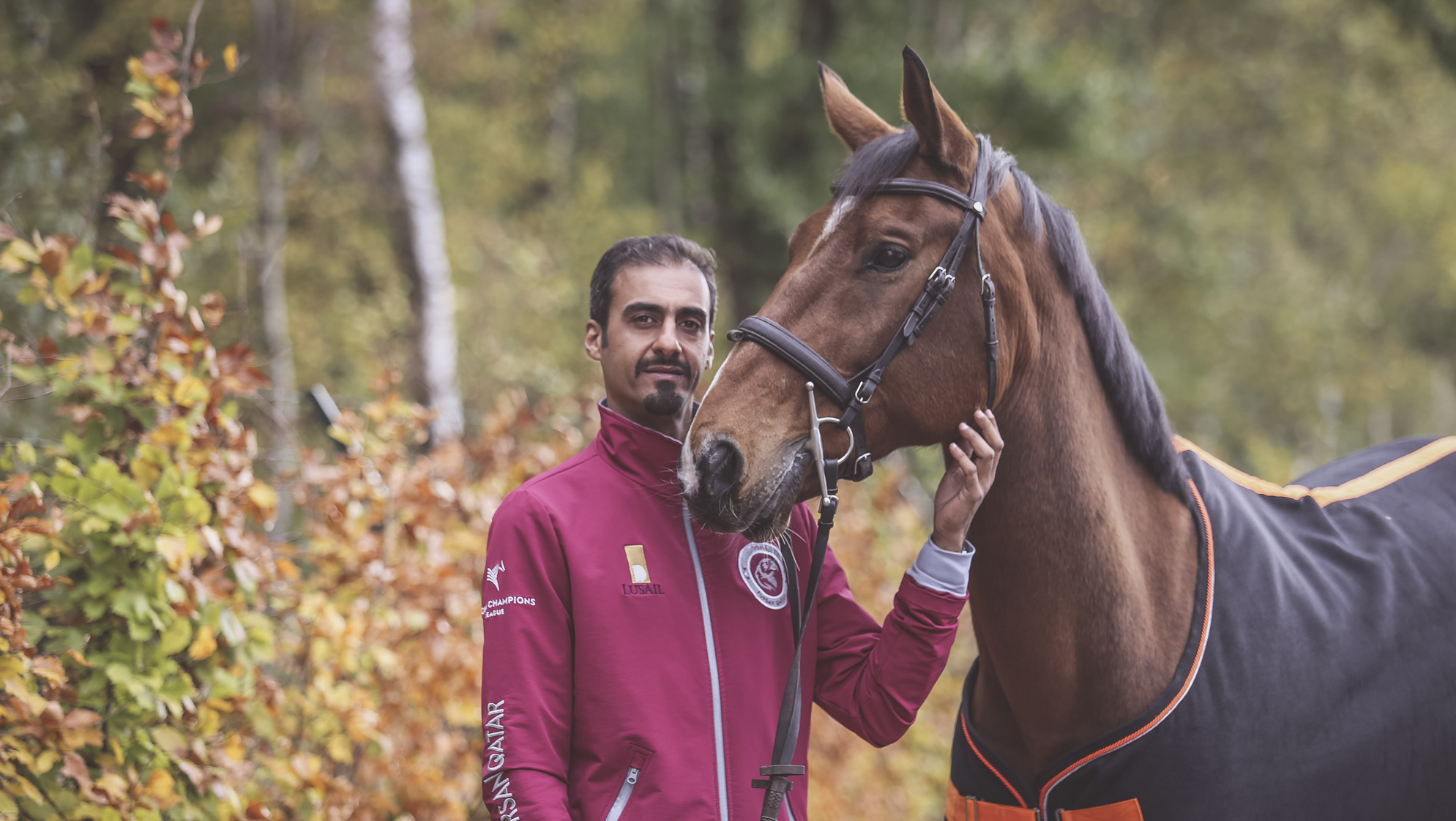 With LGCT Doha hitting AL SHAQAB from 8th - 10th November, all eyes will be on the very best horses and riders in the sport as they battle for supremacy in the world’s premier show jumping series. In an exclusive interview ahead of the event Sheikh Ali revealed: "What motivates me every day is to be successful. I work hard, I train, I go to the gym before riding, I have a programme and a plan of where I want to be. But success to me is defined as making my country proud. To bring home medals for Qatar and to represent my country against the best of the best. My dream is to win a LGCT Grand Prix, and to bring an Olympic medal home for Qatar, particularly as a team.”

Competing internationally around the world Sheikh Ali has been flying the Qatari flag for show jumping, consistently jumping at the highest level against the top ranked riders in the world. But as LGCT and GCL look to AL SHAQAB - a member of the Qatar Foundation - in Doha, after a global circuit including cities such as Miami Beach, Shanghai, Paris, Rome and London, competing at home is different, as Sheikh Ali explains: "There is more pressure for us at the event in Doha. We are motivated, you have the crowd, your family, everyone watching and you need to do well. We want to show our country what we we are doing and how we are improving. Every year there is a Qatari rider in the top ten, and it was perfect last year that Bassem [Hassan Mohammed] won. The facilities are top [at AL SHAQAB] - I can’t talk too much about it as I am from there! But the feeling is we want to do our very best for our country and show our people and country that our team are working hard in Europe and heading in the right direction.”

Taking a step back from the competition itself, Sheikh Ali reflects on the significance of having LGCT hosted by his country. "Qatar has a big vision for sport, not just equestrian. So in every sport Qatar is choosing the best. For example in equestrian they are bringing the best Tour that has ever happened - the Longines Global Champions Tour is the best there is in show jumping. If you see also in other sport we are looking to the 2022 World Cup in football, the handball final has already been hosted here, and the athletics championships run in our country.”

However a big part of this drive towards hosting premium sporting events is to inspire and engage a future generation. Sheikh Ali points to the tremendous work AL SHAQAB is doing within the country’s realm of show jumping, in particular with the Riding Academy aimed at motivating young riders. "We have also started a new education system in Qatar, and we try to inspire the next generation. This is how it should be. AL SHAQAB are doing a really good job of educating young riders, and prepare them to move to Europe for the start of a professional career.”

And when asked how Sheikh Ali deals personally with being a leading sporting figure, he replies: "I really love to inspire. I am from the Royal Family so there is attention on my name, so I have to prove that we are working hard and anyone can achieve great things. I love the sport that I do - but it all started with a love of horses. I loved horses before I loved the sport.”

With his Rio Olympic horse First Devision - where the pair took 6th individually, the highest result for any Qatari show jumper in history - California, Vienna Olympic and new rising star, the 9 year old Sirocco who will take part at the Doha event all part of his string, Sheikh Ali has serious horsepower behind him. However he is riding the wave of innovation and evolution when it comes to show jumping, and welcomes the development in the sport. "The sport is changing. And Jan [Tops] is a visionary - he sees this and helps to grow it in the best way. Every year something on the LGCT and GCL is changing. Now we have the GC Playoffs. Before that we had no teams, and now we have the GCL for three years. You don’t know what’s coming up, but it’s getting more and more interesting. We are very excited, and see more and more people from Qatar and around the world following us. I remember I used to go for dinner with people outside the sport who asked what I was doing - they had no idea what show jumping really was. But now, even those who are not in the sport know what it is and really get it."

And the future looks bright for show jumping in Qatar, with the 2020 Olympics clearly in the mind of Sheikh Ali and his teammates. For the third year, they form the Doha Fursan Qatar GCL team, powered by partner Lusail, with the experienced team battling against 18 others this year in the prestigious team championship. “We are working towards a programme for Tokyo for the Qatari show jumping team so we have had to slow down a little and it’s one of the reasons we decided to put [British rider] Michael Whitaker in our Doha Fursan Qatar GCL team as he has many of his own fantastic horses."

"As you know the sport has totally changed. The level, how technical it is, the way of the sport is very different and the vision is totally different to how it was before, so we need to improve our team. So we need to stay jumping at the highest level, within the Longines Global Champions Tour and GCL shows, to help our team improve. Qatar is a small country - we cannot go for a lot of Nations Cups so the GCL team competition is helping our national show jumping team. We feel the pressure at every event exactly the same as the Olympics.”

Indeed, competing at the highest level in the 16-event LGCT and GCL global circuit in multiple environments is a true test of the best for Sheikh Ali and his Qatari teammates. "Bassem [Hassan Mohammed] for example is already doing extremely well in the Globals - he won two Grand Prix, the last being in Doha - and has been on the podium a few times. This is what we are trying to do, put Qatar ahead in the sport."

And putting Qatar at the sharp end of the sporting grid is the mission for Sheikh Ali, and is something he is extremely passionate about. "I’m really looking forward to building our team for Qatar. This is really my mission. But to do this we have to train now, and we have to prove we can do it. We did this already at the 2016 Olympics in Rio - it was the first time we were one point away from the final, and we had an individual rider finish sixth which is a big result for Qatar. We know we can do it, now it is not just about showing Qatar in a good way, it’s about bringing home some medals."

And looking ahead to the forthcoming LGCT and GCL finals in AL SHAQAB, Doha, Sheikh Ali is immensely proud: "AL SHAQAB really has the best facilities and everything needed for the top riders and horses in the world. Even when I go there still, I catch my breath and think 'wow'. There’s something really special about it.”

For more information and to book your tickets, please click here.