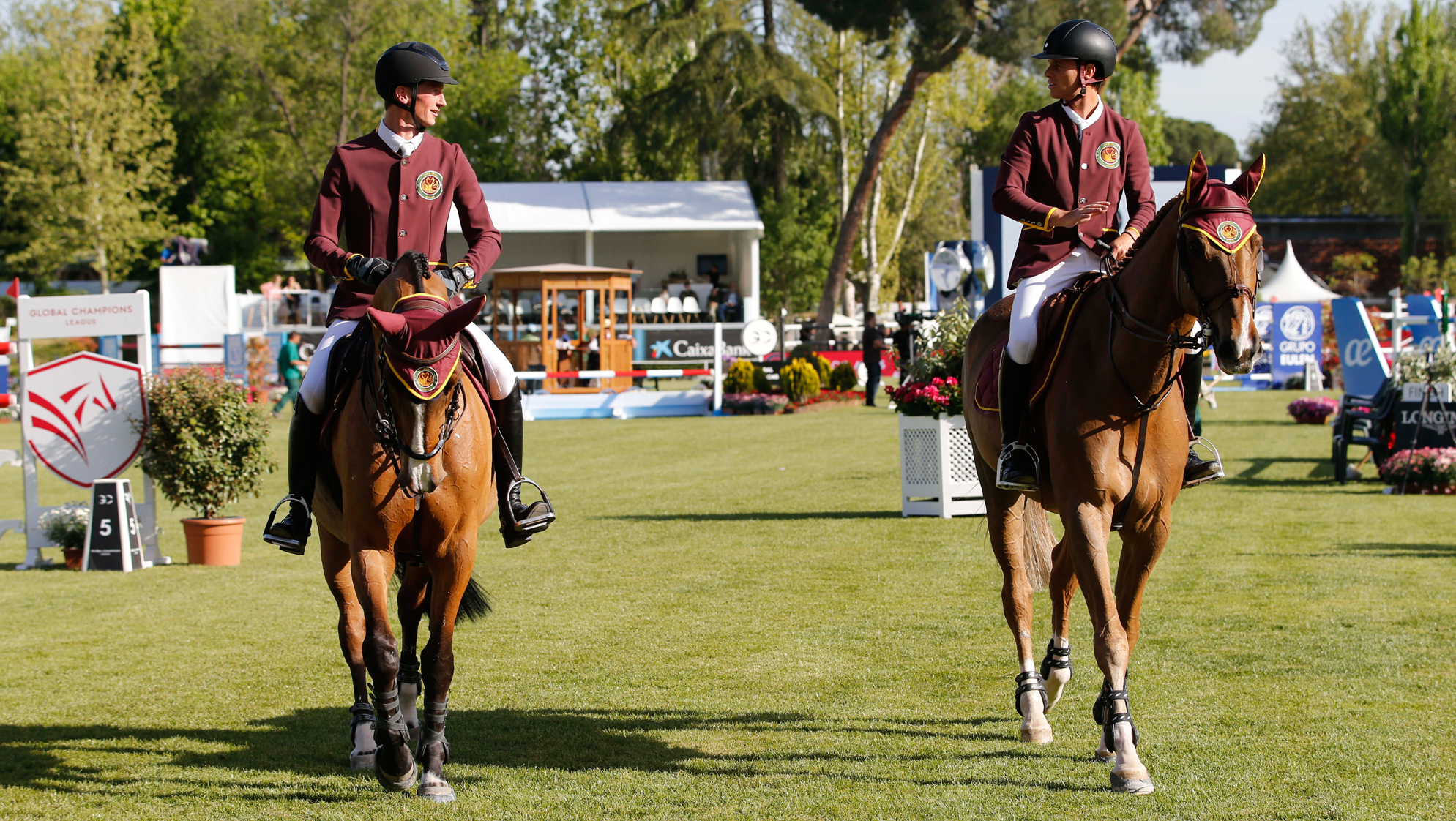 The Shanghai Swans duo of Daniel Deusser and Pedro Veniss flew to the top of the order in today’s GCL Madrid team competition, with a knife-edge result promising thrilling action in Saturday’s Spanish showdown.

The only team to jump double clear, the Swans pulled out all the stops in the first European stop of the Championship, finishing ahead of the Montreal Diamonds’ Eric Lamaze and Danielle Goldstein and Rome Gladiators’ Laura Kraut and Lorenzo de Luca.

New recruit Veniss, who made his debut for the team today, said “I’m very happy! Our plan was to go slow and clear, as my horse is a little green at this level, so we’re going to try and do the same tomorrow. We are going to try to be in the [GC Play Offs] for sure!"

With the top 16 ranked teams this season qualifying for the GC Play Offs in Prague in December, every point will count, and season-long tactics are becoming ever more crucial as the Championship unfolds. Five teams head into tomorrow on four faults, with a further five on a combined score of eight faults, meaning the action will go right down to the wire in Saturday’s GCL Madrid final.

Set in the picturesque Club de Campo Madrid, Santiago Varela Ullastres’ course was delicate to say the least; the poles rolling at the lightest of brushes, and a clever challenge for the very best riders in the world. The last line had a galloping loop to a wide Volvo oxer, before a Caixa Bank treble combination and a final black and white oxer away from the in-gate to finish.

The trouble came when riders let their horses gallop towards the fences, with many coming in deep and taking out front rails and clipping the 1.50m verticals. Despite the expansive arena, total control and precision were required as the undulating terrain invited the horses to pick up pace.

Valkenswaard United fielded the imposing paring of Marcus Ehning and Bertram Allen, with the duo bringing top horses Funky Fred and Molly Malone V for the fourth round of competition. An unusual two rails down from the experienced Ehning meant Allen had everything to do, however rose to the challenge beautifully - keeping the team on a score of 8 following his calm and collected clear.

First, and ultimately the only team, to go double clear were the Shanghai Swans pairing - the burgundy and gold team setting the benchmark for the field to follow and proving the elusive double was possible. Pedro Veniss made his first appearance for the team this season, putting in a brilliant effort with Uccello de Will, quickly followed by Daniel Deusser with Equita van T Zorgvliet.

Speaking after his team’s result, Deusser said: "We have a very strong team, we have had very good rounds already [this season] but have missed a little luck. I hope for the next couple of legs that we can be higher in the rankings and collect some points, as in my opinion we have one of the strongest teams overall.”

Many of the team’s second riders finished on a better score, perhaps benefiting from the brief chat between teammates in-between rounds.

U25 rider Anna Kellnerova pulled out another clear to make up for Gerco Schroder’s 12 faults, the Prague Lions sitting outside the top ten but hungry for a big points haul tomorrow.

Jessica Springsteen knew that her team score of four could mean the Miami Celtics are in contention for a podium tomorrow; “It’s a big enough course for the first day, and an impressive ring - I’m not surprised [there are faults], but it was a great start for us today.”

Ben Maher of London Knights also felt positive looking ahead to tomorrow’s GCL Madrid final, with the team also on a score of four and everything to play for: “Emily gave us a good start, unfortunate she got unlucky on the turn to the rail. She gave me a good headstart like in Shanghai - Winningood has had a short break and was a little spooky. It’s a long course with lots of shadows coming out at this time of day, so it’s proving not so easy.”

There was disappointment for home city team Madrid in Motion, after the father and son duo of Maikel and Eric van der Vleuten collected a combined score of 12 faults, heaping the pressure on their shoulders for a strong result tomorrow to try and rise back up the order.

Final team to go, reigning 2017 Champions, the Montreal Diamonds looked in prime position to take over the top spot, after Eric Lamaze and Fine Lady put in a blisteringly quick clear to give Danielle Goldstein and Lizziemary the best chance possible. But the back rail of the Volvo oxer came down for Goldstein, putting the team on a score of four, but into second place with their speedy time of 144.83.

So it would be the Shanghai Swans who stole the show in today’s GCL opener, paving the way for a thrilling face-off in the Spanish capital. All the action will be streamed live via GC TV and on the official Facebook Page, tune in at 15:15 local time to watch the drama unfold.