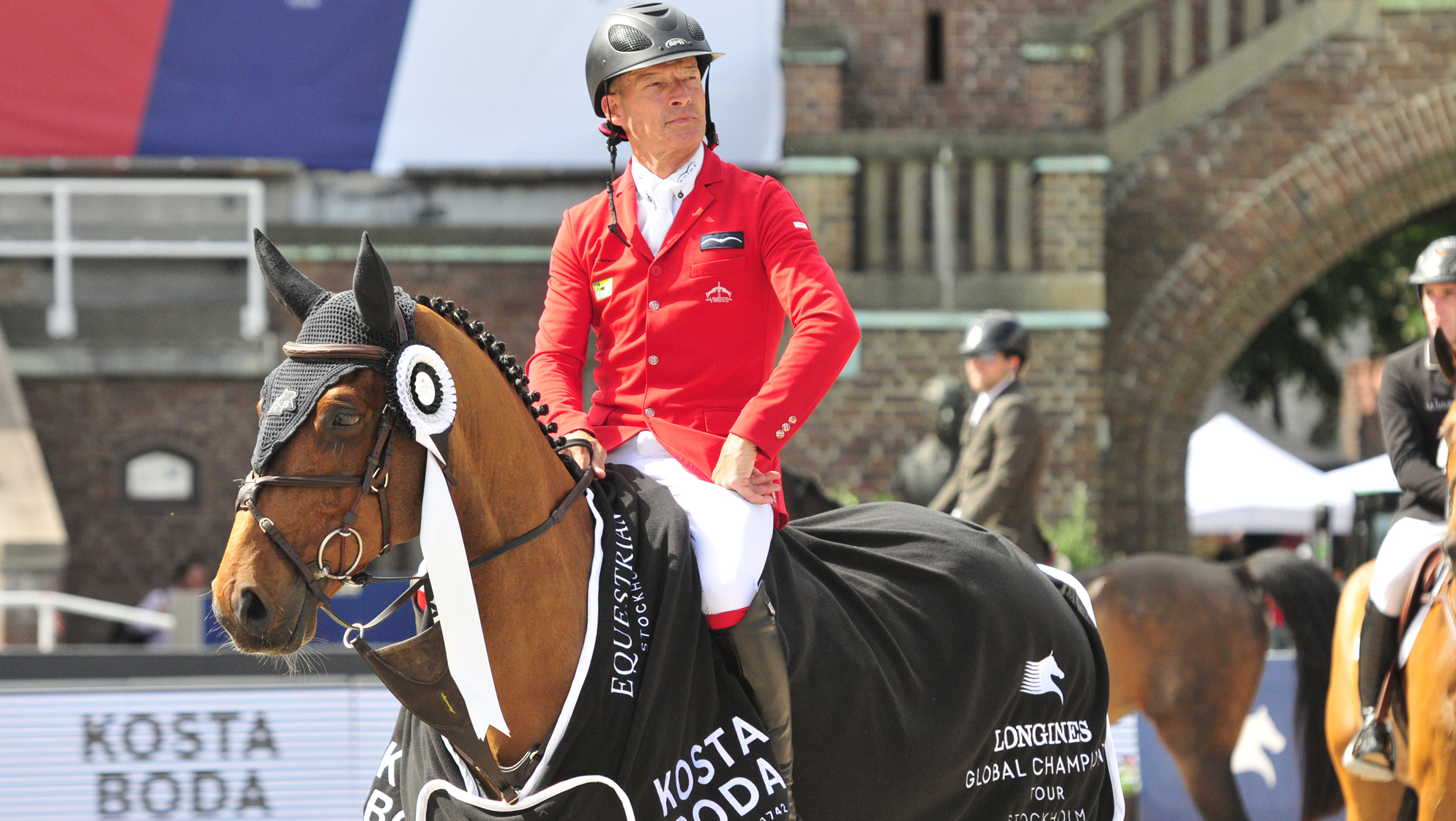 As the final day of the Longines Global Champions Tour of Stockholm began it was Pius Schwizer (SUI) and Chaquilot who stormed to victory in the speed class by over a second. Irishman Mark McAuley (IRL) finished second with Jasco vd Bisschop, closely followed by Daniel Bluman (ISR) and Entano.

The Italian course designer Uliano Vezzani built a very fast 1.50m course with the rustic upright causing the most trouble. 27 combinations tackled the twisty course but only 9 managed to keep all the fences up within the time.

First to go was Karel Cox (BEL) on Kill Bill Max, they set the pace early on by producing a clear round in a time of 63.34. Young talent Jennifer Gates (USA) got a little deep to the first fence causing her to land short and the Stockholm upright fell to leave her and Hermelien vd Hooghoeve with four faults.

After a win on day one at LGCT Stockholm, Daniel Bluman (ISR) was aiming to do to it again. He made all the inside turns and stormed into the lead with a very fast time of 60.59, putting the pressure on the rest of the field. Alberto Zorzi (ITA) rode a beautiful round on his fairly inexperienced mare Dakota. He had one down and also picked up a time fault causing him to finish outside the top 15.

The next to challenge Bluman was Sweden's Jakob Hellstrom (SWE) on Mansini ltd. They crossed the finish line in a faster time but unfortunately, a couple of turns were too tight and they had eight faults. Johan-Sebastian Gulliksen (NOR) cut a second off the time to beat on his experienced horse David Guetta, but the rustic upright also caught him out, forcing him out of the placings. Athina Onasis (GRE) then schooled MHS Going Global round the flowing course and was the only combination to pick up three time faults.

The Queen of showjumping in Sweden, Malin Baryard-Johnsson (SWE) was flying from before the first fence looking like she was going to repeat history from day one at LGCT Stockholm. Unusually H&M Second Chance became a little flat and they had two down leaving them 22nd overall.

Harrie Smolders (NED) was as smooth as silk through his turns but couldn’t quite overtake the leading time as he crossed the line just three-tenths of a second slower on the beautiful bay Cas. Mark Mcauley (IRL) then produced the tightest turn in the whole class from fence two to three. This put him and Jasco vd Bishop to finish in a well respected second place.

A warm welcome from the fans for Evelina Tovek (SWE) and Oz de Breve gave the pair all the confidence they needed. The combination looked like they were set to take over the lead but the rustic fence fell once again dropping them out of the prize money.

Pius Schwizer (SUI) planned his route perfectly. He cruised Chaquilot round the Olympic Stadium and easily went into the lead by over one and a half seconds. The Irish are known for going fast and Michael G Duffy (IRL) proved that today. He steered his experienced grey over the finish line in 59.02 seconds but two fences fell putting him out of contention for the win.

The drama continued as Rene Lopez (COL) retired after going too fast to make a turn back to a wide oxer on Con Dios III then last to go Jos Verloory (BEL) would have been one of the quickest times however 12 faults meant today wasn't his day.

The final class of LGCT Stockholm will start at 13.40 local time so make sure you tune into GC TV to watch the action LIVE and for FREE!