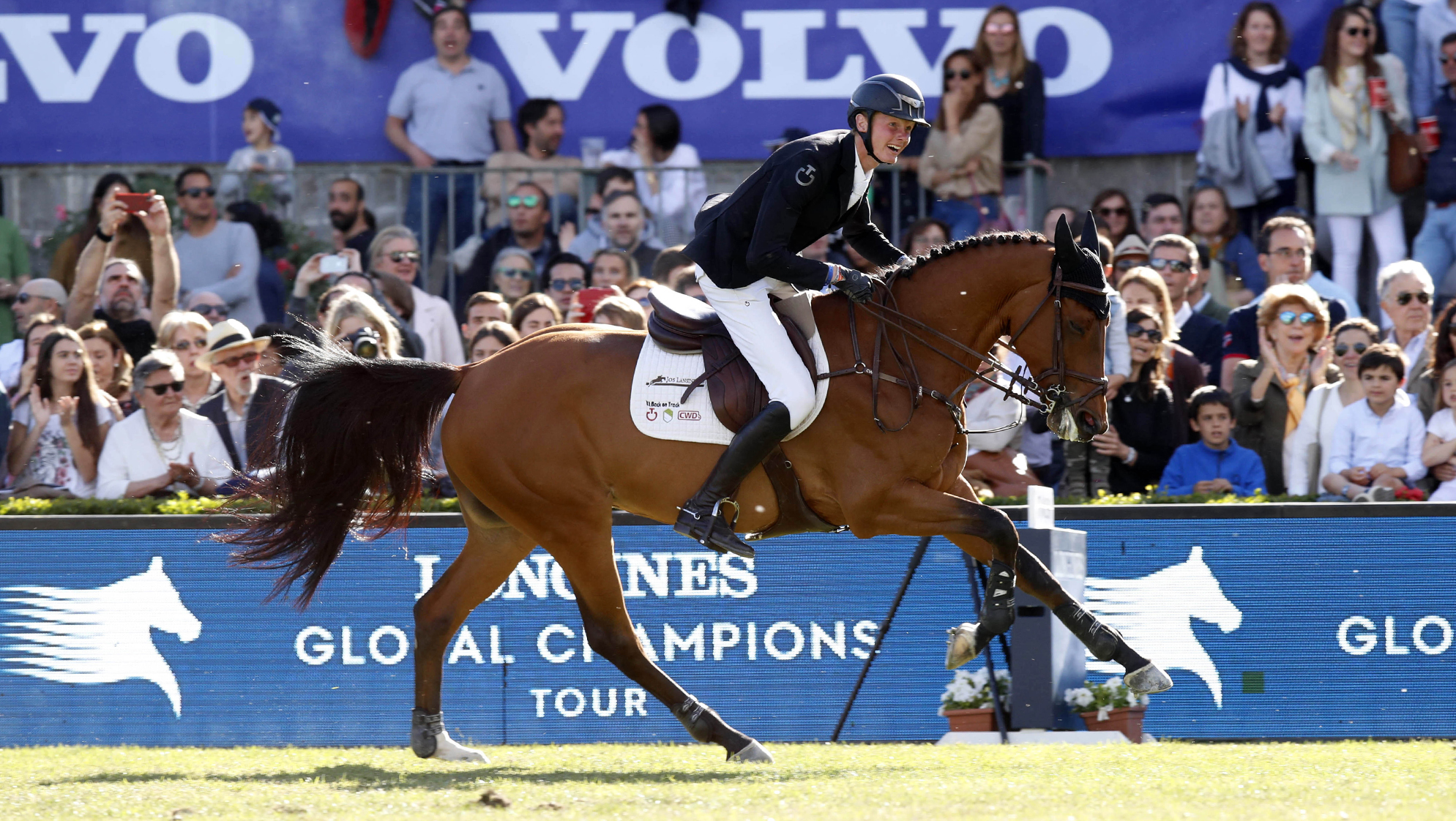 Frank Schuttert (NED) and Queensland E etched their names into history and onto the list of winners for the illustrious Copa S. M. El Rey - Volvo trophy, 'The King’s Cup', in the final day of action at the Longines Global Champions Tour of Madrid.

‘The King’s Cup’ is part of the long-standing tradition with this weekend marking the 109th edition of the show in Madrid, and closing the competition for the event. Frank Schuttert was presented the trophy in front of a bumper crowd, fans applauding the young star as he held the gleaming silver cup.

A delighted Frank said: “I’ve only had this horse for two months, and this ring is very impressive. The horse is naturally very quick, so I could start with a good pace. You know with these riders behind you, you have to gamble a little bit!”

It was standing room only as crowds flocked to the Club de Campo Madrid, spectators stacked deep around the arena and filling every inch of the lofty grandstands. Spanish course designer Santiago Varela Ullastres set a flowing and winding track, with a Longines double set away from the in-gate and a tricky final line consisting of five obstacles culminating in a huge Volvo oxer right in front of the packed out grandstands. The course required concentration throughout, poles rolling at the lightest of touches and power and pace needed for scopey oxers.

Marc Houtzager (NED) was the first to go clear, after Sterrehof's Edinus took the flowing course in his stride. He was quickly joined by U25 American rider Jennifer Gates who piloted the formidable stallion Capital Colnardo perfectly around the galloping grass arena, a smile spreading across her face as they sailed through to the jump-off.

There was drama after Jérome Guery (BEL) and Kel'star du Vingt Ponts came undone at the Longines double, the horse sliding to a stop and Jérome taking a tumble and therefore eliminated. Harrie Smolders (NED) and the super-fast Zinius would always be a danger in the jump-off, but an unlucky four faults ruled them out of a chance for glory. William Whitaker (GBR) and RMF Charly jumped their hearts out for a place in the showdown, but they came just short of the time allowed, William visibly disappointed with the one time fault allocated and keeping them from a shot at the win today.

Maikel van der Vleuten (NED), a previous winner of this class, managed his horse Beauville Z beautifully around the course - so far this weekend Maikel had secured a third and second place, could this be his final chance to take a win in Madrid? Spencer Smith (USA) and the grey Houston quickly joined those in the jump-off and Edwina Tops-Alexander (AUS) with Veronese Teamjoy pulled out all the stops to add their name to the A-list line up.

There was heartache for the capacity crowd as home hero Eduardo Álvarez Aznar’s (ESP) hopes of a win came undone in the final line after Seringat stumbled and they knocked down the penultimate fence. He received a huge round of applause as he exited the arena, local fans proud of their home rider.

As the sun started its slow descent over Madrid, the shadows lengthened and the atmosphere intensified as fans readied themselves for what promised to be an ultra-fast showdown.

First in Marc Houtzager (NED) looked determined with Sterrehof's Edinus, with Marc taking all the risks he dared with inside turns and finding the perfect stride on the roll back to the Madrid vertical. A gallop to the last, and the pair stopped the clock in 42.91s, with the potential for a later rider to better his time.

Jennifer Gates (USA) and Capital Colnardo took the same brave inside turn, Jennifer finding the perfect stride to the fence. But they lost a little balance on the turn back to the Madrid vertical, and the pole fell, putting them on four faults. Despite this, Jennifer and Capital Colnardo shaved off almost a second of Marc’s time, finishing in 40.69s.

Former winner Maikel van der Vleuten (NED) had focus etched all over his face as he summed up the fences one final time. With his ears pricked Beauville Z responded with electric energy, the nine year old gelding flying around the course. But a dare too far at the Massimo Dutti combination saw the horse refuse, and the pair were out of contention.

As “Born in the USA” rang out around the show ground, Spencer Smith (USA) and Houston cantered into the arena. A fast rider, Spencer set off at a gallop but took a wider turn to the tricky Madrid vertical. With Spencer opting for the outside turns, they came home in a double clear but were three and a half seconds slower in 46.42s.

Edwina Tops-Alexander (USA) and Veronese Teamjoy looked in perfect harmony, with the horse and rider beautifully balanced and finding the right stride throughout. A gusty turn and a flat out gallop saw them up on the time, slipping ahead of Marc and setting a new time to beat a full second faster in 41.90s.

Young rider Frank Schuttert (NED) came just behind Edwina in the Longines Global Champions Tour Super Grand Prix last December, and looked keen to slingshot his way to a win today. Frank and Queensland E absolutely flew around the course, delivering their clear plan to perfection and shifting the jump-off up a gear to finish a full two seconds faster in 39.07s. The pressure would really be on for the final three riders to come.

Scott Brash (GBR) and the 10 year old Hello Shelby covered the ground quickly, but the Longines oxer fell as they raced around to the final line, dropping them out of contention.

The atmosphere was buzzing as Laura Kraut (USA) and Curious George entered the arena, the horse benefitting from his huge stride. The gave it everything they had, flying over the last to finish with the crowd on the edge of their seats to see if they had beaten Frank’s time. But it wasn’t to be, with Laura finishing in 39.88s and slotting into second.

Final rider to go Martin Fuchs (SUI) had a sense of deja-va, in prime position to steal the show. This time he piloted the grey Chica B Z around the arena, the light catching as the mare flicked her tail expressively over the fences. Silence fell all around the arena as they powered to the fences, Martin keeping the momentum and the turns as smooth as possible. They galloped to the last, just milliseconds off the time, and couldn’t quite make it, finishing in 38.85 to take second place.

So the win would go to Frank Schuttert (NED), the young Dutch rider adding his name to the illustrious list to win the King’s Cup at LGCT Madrid. Martin Fuchs took second and Laura Kraut in third.

The LGCT now looks to round six, Hamburg (29 May - 1 June) where the Championship fight will continue across Europe.