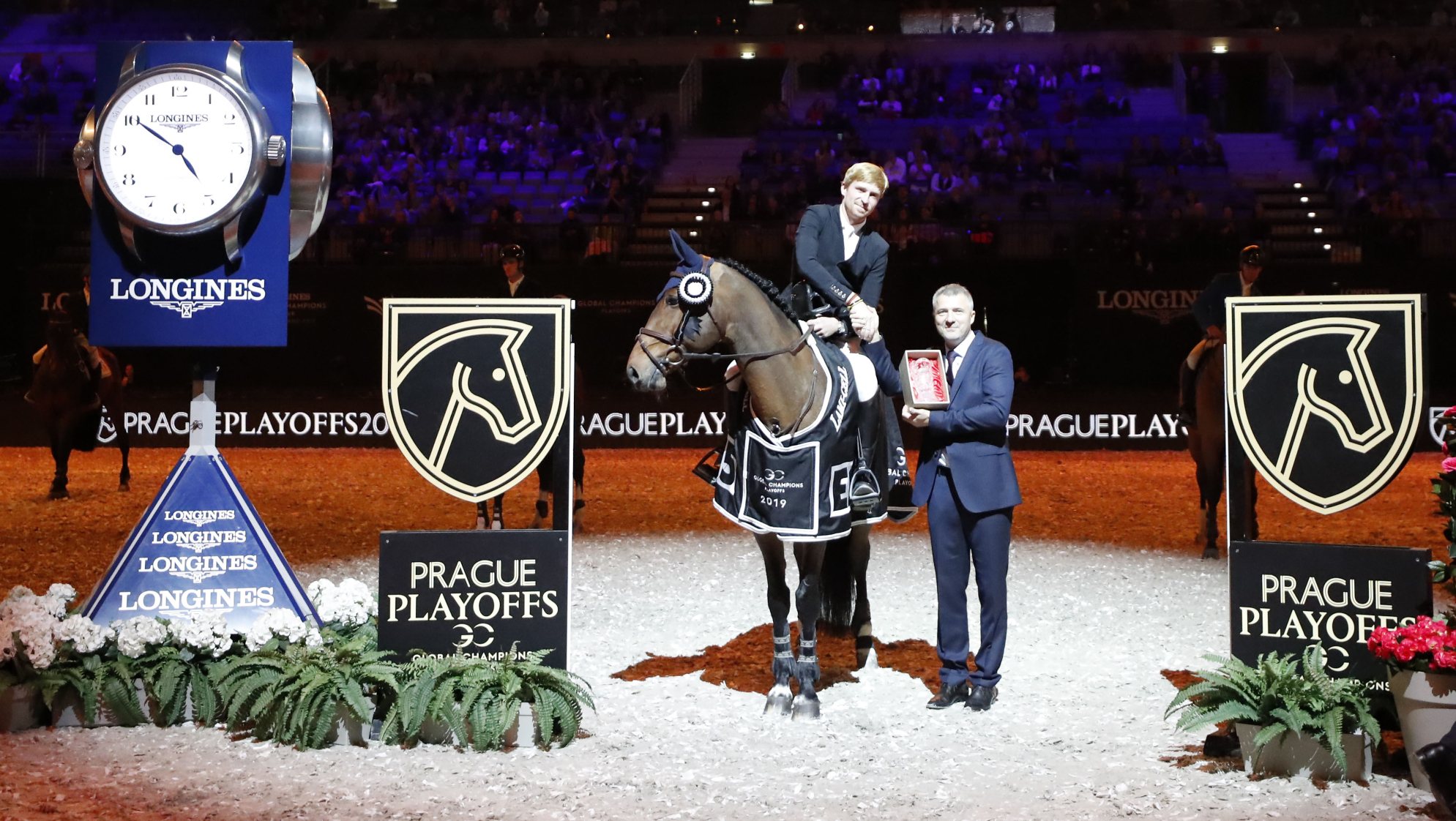 The 25 year-old said: “It’s a very special victory for me as it’s my first one at CSI5* level. It’s a great way to finish my weekend, and my season. I hope to be the same next year in the start of the season. I think I won in the turn to the water tray - I saw the first distance and I took it, my horse is really fast on the ground. I’m lucky today and very happy.”

30 talented international combinations coming forward to tackle the E15 1.50m jump-off class, all aiming for the lion's share of the 50,000 euro prize purse but unusually Uliano Vezzani’s course featured 3 plank challenges, catching out some of the best in the world.

Pathfinder Niels Bruyneels (BEL) cruised his huge striding stallion Jenson van’t Meulenhof round for a clear just one tenth of a second inside the time allowed. Commenting on his round Niels said: “Jenson was jumping very well, I am really pleased with his progression. I am happy to be first to go as I will do my own jump-off.”

Picking the up the pace Marc Houtzage (NED) and Sterrehof’s Dante easily landed themselves in the jump-off straight after Niels. There was then drama for Pieter Devos (BEL) at the CarTec plank when Jade vd Bisschop unexpectedly stopped adding multiple faults to Devos’ final score.

Having settled from the first day of competition Francois Mathy Jr's (BEL), Eclinsco de l’O lost concentration through the triple combination knocking all three parts and finishing on 17 faults. There was disappointment for Roger-Yves Bost (FRA) after the penultimate fence fell knocking him and Castleforbes Talitha out of the jump-off.

Jur Vrieling (NED) knew he was close to the time so took a stride out to the last fence and cleared it with ease but passed through the timers less than a second outside the time allowed leaving him with one time fault and no jump-off. Marlon Modolo Zanotelli (BRA) looked on great form until Diesel GP du Bois Madame left a leg behind at the final fence meaning it wasn’t meant to be for them today.

After his clear in the first round with H&M Extra Olivier Philippearts (BEL) talked about his tactics for the jump-off: "Extra is jumping well so I will really try and go for it in the jump-off and see if we can pull something off.”

Simon Delestre (FRA) proved its never over until you are through the finish line after Qopilot Batilly Z hit the breaks just before the final fence and came to a sliding stop add faults to their clean sheet. But former world number one Harrie Smolders (NED) made the twisty course look easy on his 15 year old stallion Don VHP Z N.O.P. The consistent combination took the 11th and final place in the jump-off.

First to return Bruynseels (BEL) came back determinedly with Jenson van’t Meulenhof but the Belgian took it steadier, leaving the door open in a time of 38.23s. Houtzager (NED) and Sterrehof’s Dante looked quicker from the start, the pair making a smart turn back after the green and white double to clear the Czech Equestrian Team vertical with ease. But the wavy plank fell, putting them on 4 but with a faster time of 36.18s.

Jane Richard Philips (SUI) and Kenia van ' T Laerhof set off out the blocks at a formidable speed, the mare landing and shooting off to the next fence. They took a fantastic angle to the Czech Equestrian Team fence, but it came undone at the last fence as they drifted left and hit the side of the jump, bringing it down despite their time being a breathtaking four seconds faster than Bruynseels.

Alberto Zorzi (ITA) also threw caution to the wind at the last, pushing Cinsey on for a flier to the last. But it also wasn’t to be as the final fence fell, another second faster than Richard Philips but out of the running.

An early fence for Constant van Paesschen (BEL) and Isidoor van de Helle dropped them out of a chance of the win today, and Marco Kutscher (GER) and Casallvano followed suit with 4 faults.

Leopold van Asten’s (NED) VDL Groep Miss Untouchable looked on formidable form, the mare jumping well throughout. Despite a couple of checks they kept all the poles up, setting a new time to beat in 35.61s. Speaking immediately after he said “I needed to check two times - I knew I had to take a little bit of time. To the last one I didn’t get the first distance, but I was happy how she jumped.”

Titouan Schumacher (FRA) made an early super turn with Atome Z, just clipping the flag but getting away with it. They shaved every corner possible, making some impressive turn backs - in particular to the Czech Equestrian Team fence - and flew to the finish in 31.45s.

Olivier Philippaerts (BEL) and H&M Extra were deceptively quick, smooth in every turn and finding the stride to every fence. But took a long shot to the last, but couldn’t better the time - finishing in 36.03s and slotting into third so far. Bart Bles (NED) with Kriskras DV were just as smooth, but they too fell short of the time to beat, finishing in 35.65s, just ahead of Philippaerts.

Final rider to go, Harrie Smolders (NED) he had to take a chance aboard Don VHP Z. The huge striding horse was naturally slower, so Smolders took the sharpest of turns. They galloped to the final fence, but missed their stride, bringing down the fence and out of contention for the win.

The LGCT Super Grand Prix is next this evening, kicking off at 20:00 local time. The Walk of Champions will be showcased just before, taking place at 18:10 and from 18:45 viewers can watch the live GC TV studio featuring special guests Edwina Tops-Alexander and Darragh Kenny.