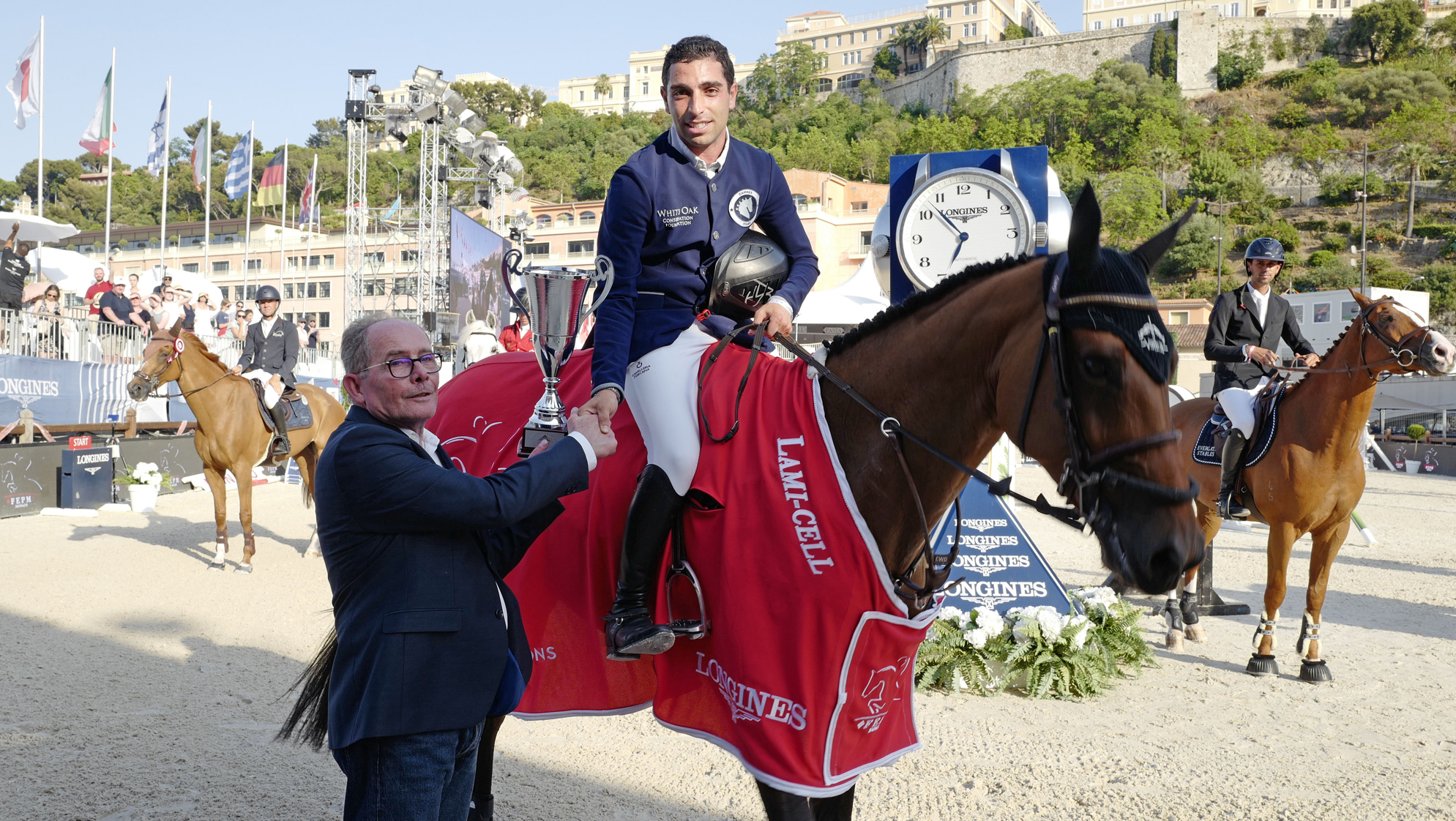 With a cool breeze flowing in from the Mediterranean sea the international athletes jumped their first CSI5* class of the Longines Global Champions Tour of Monaco. It was the Egyptian National Anthem that rang out as Abdel Saïd took top honours with Venise du Reverdy. Last to go Wilm Vermeir (BEL) followed in second place on his 13-year-old Gentiane de le Pomme. Then fast and furious Pius Schwizer (SUI) and Chaquilot took third.

A delighted Abdel Saïd who has been on great form this season already said about his mare: "Venise is a really good horse, lately I have been using her for the big classes so I thought it would be nice to drop her down a level this week and I think she had fun and enjoyed it."

The track was built by well-known course designer, Frank Rothenberger who put together a fast-paced 1.45m two-phase course of thirteen jumps. Interestingly fence one was also the final jump and there were a couple of tricky related distances which required the 47 combinations who took on the course to concentrate from start to finish.

American Laura Kraut produced the first double clear of the day with Hello Guv’Nor in a very fast time of 35.15 seconds. Kim Emmen (NED) and Farah followed next and finished with a clear but they were over two seconds slower pushing them down the leaderboard. Norwegian rider Gier Gullicksen pushed the gas pedal down to the floor on his very fast grey, Gin Chin van het Lindenhof but they were not fast enough and the pair finished just outside of the top 10.

Longines Ambassador of Elegance Jane Richard Philips (SUI) sprinted ahead on Dieudonne de Guldenboom as they easily cruised round the arena in a time that was two seconds faster than Kraut. However, the first to take the inside turn to the double was Nayel Nassar (EGY) and Oaks Redwood. This risk paid off and they stormed into the lead leaving the rest of the field having to push hard if they wanted to catch him.

Denis Lynch (IRL) would have gone into the lead with Hector van D’Abdijhoeve but the first part of the double came tumbling down and he dropped outside of the top 10 to be the fastest on four faults. Speed demon Emanuele Gaudiano (ITA) got faster and faster but got too close to the GC upright for Casper 232. This refusal plus 6 other faults put them out of contention in this class.

The drama then continued at Frank Schuttert (NED) retired early on with the plan to save Queensland E for the team competition this evening. Young talent Harry Charles (GBR) who was on great form last week just had the last fence of the first phase down with fairly new ride Cabanus.

Rene Lopez (COL) also attempted the inside turn back to the double but it wasn't smooth enough and the front pole of the oxer fell leaving them with four faults. Former LGCT Grand Prix of Monaco winner Bassem Hassan Mohammed (QAT) flew round phase one with Argelith Squid but today wasn’t meant to be his day as the LGCT fence fell and they also finished with four.

Abdel Said (EGY) raced home in a time of 30.60 second on Venise du Reverdy, the combination galloped across the arena to take home top spot and add another win to their record. Puis Schwizer (SUI) nearly picked up the largest part of the prize pot with Chaquilot who powered effortlessly around the sand arena. In the end they took home a well respected third place and proved they will be one to watch over the weekend.

Last to go Wilm Vermeir gave it his best shot on Gentiane de la Pomme and flew into second place one and half seconds slower then Sïad.

GCL Monaco round one will kick off at 20.15 local time today so tune into GC TV or Facebook live to find out which team will take pole position going into Saturday’s final.