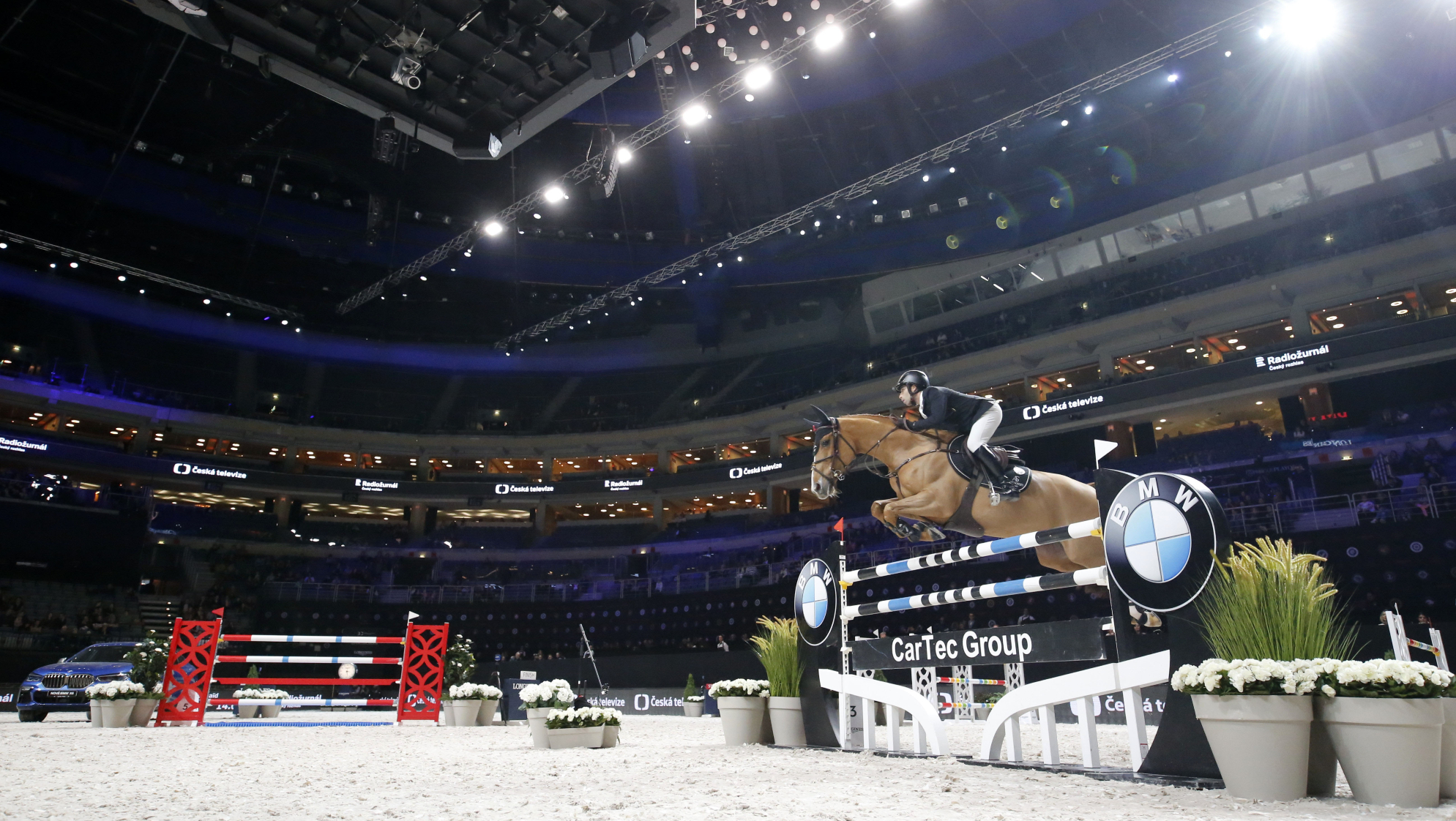 Abdel Saïd (EGY) climbed one place higher in Prague today to pick up top honours in the BMW Cartec 1.50m two-phase on Arpege du Ru. The pair flew effortlessly around the O2 Arena in 19.81 seconds to take the first win during the second day of the GC Prague Playoffs. Half a second behind them was Simon Delestre (FRA) and Qopilot Batilly Z in 20.34 seconds. While Jérome Query (BEL) and Garfield de Tiji Des Templiers finished in third with a time of 20.91.

Abdel praised his mare saying: “I am delighted, she deserved to win, we gave it everything and I am very happy it worked out today. I am very excited for the GCL Super Cup Semi-Final tonight. We had a great start yesterday and our team are in good form so I am looking forward to later."

32 international combinations came forward to tackle the 1.50m course built by Uliano Vezzanis. The course was smooth and flowing with the penultimate jump featuring a wavy plank and proving to be the joker fence, falling frequently.

First to test out the two-phase course was Georgina Bloomberg (USA) and 10 year old Quibelle. The pair took all the inside turns in the second phase and looked on track for a double clear - but the second to last fence fell adding 4 faults to their time of 23.74 seconds. Unusually Pieter Devos (BEL) and Clarie Z were knocked out early on when two fences fell in the first phase.

The first double clear was produced by Alberto Zorzi (ITA) and the experienced 15 year old Ego van Orti. They played to their strengths and took out strides where possible but his reign on top didn’t last for long as next into the arena Constant van Paesschen (BEL), who aboard Isidoor van de Helle, shaved a full second off Zorzi's time to fly into the lead in 21.80 seconds.

German legend Ludger Beerbaum (GER) went for a steady jump round on Cool Feeling, picking up one time fault in the first phase and out of contention for the win today. Then the last fence fell for Eduardo Alvarez Aznar (ESP) who was riding 8 year old Legend - the youngest horse in the field. Francois Mathy Jr (BEL) was blindingly quick through the turns on his grey gelding Eclinsco de l’O, stopping the clock just 0.9 of a second slower than leading time.

Speed demon Abdel Saïd (EGY) raced into the lead and was the only rider to finished in sub 20 seconds. Spending no time at all in the air Arpege du Ru took a flyer to the Shamrock oxer helping the pair set an extremely fast time to beat.

There was drama when Titouan Schumacher (FRA) added an extra stride to the last fence causing Atome Z to put the breaks on before clearing it with ease when they came back around. It wasn’t meant to be today for Marlon Modolo Zanotelli (BRA) who was also caught out with Diesel GP du Bois Madame by the plain coloured plank despite a valiant effort in a time of 21.37 seconds.

Yesterday's winner Dani G. Waldman (ISR) was aiming to pick up another podium place but fell short of the second phase after an early fault on her striking dapple grey Javita. Known for their speed Simon Delestre (FRA) and Qopilot Batilly Z were galloping before the word go but couldn’t quite match the pace of Saïd and had to settle for second.

Both Mark McAuley (IRL) and Daniel Deusser (GER) retired after the first phase to save the energy of Vivaldi du Theil and Scuderia 1918 Tobago Z for the rest of the weekend.