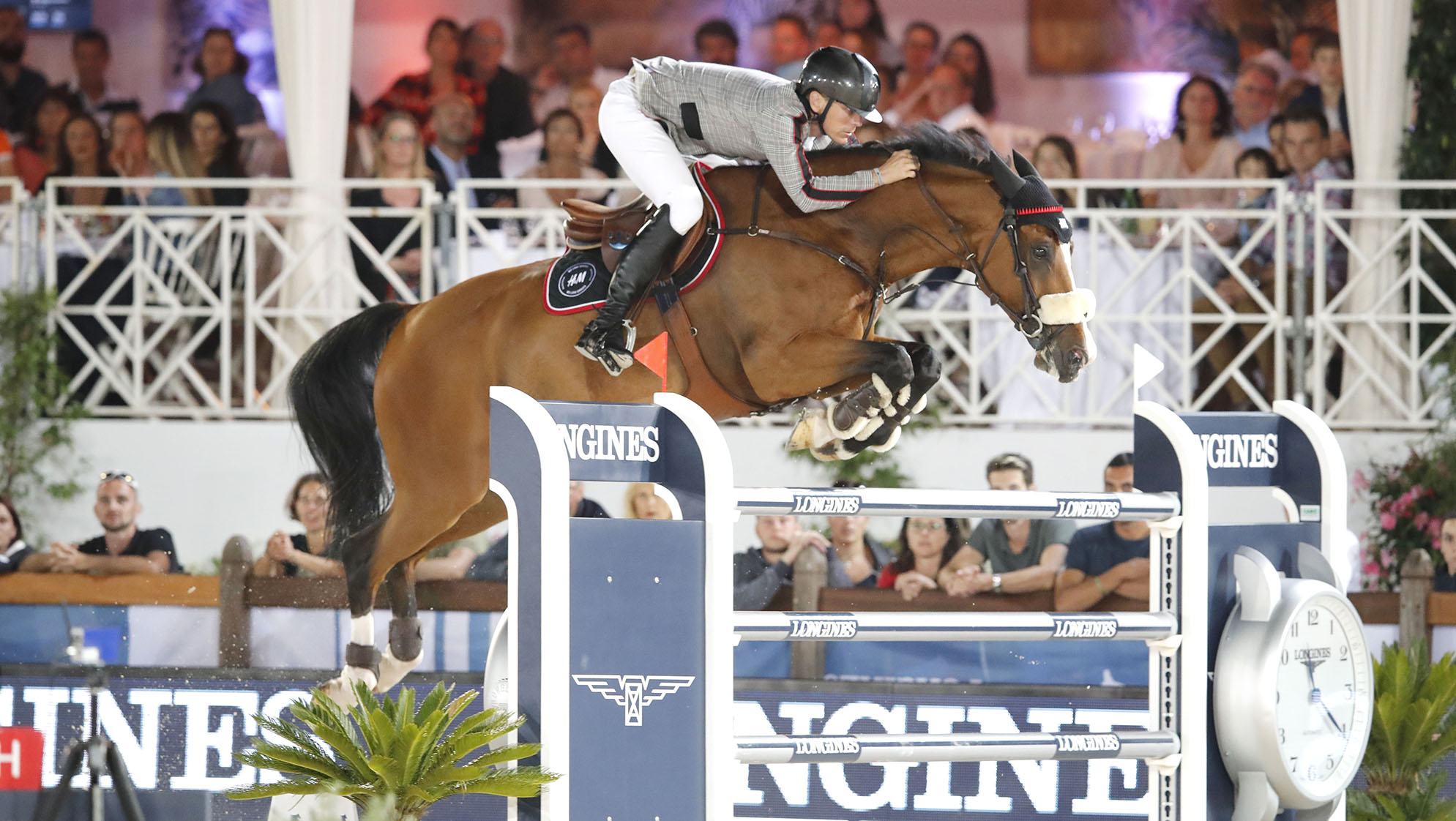 Peder Fredricson (SWE) and his powerful bay Hansson WL reigned supreme in Cannes winning a supercharged jump off against the heavyweight stars of show jumping.

It was a night of explosive top sport next to the shores of the Mediterranean for the 7th leg of the Longines Global Champions Tour circuit.

Fredricson’s victory means he has qualified for a coveted place at the Longines Global Champions Tour Super Grand Prix at the spectacular new GC Playoffs in Prague in December. Speaking after the prize-giving ceremony he said: “I am really excited to go to Prague, it’s going to be really good.”

After the event it was announced that €3 million, in addition to the €6 million already spent on infrastructure at the venue, has been agreed by the City of Cannes and Mayor David Lisnard to continue to improve the facilities.

It was a rollercoaster start to the LGCT Grand Prix of Cannes as course designer Uliano Vezzani’s tough first round track triggered multiple faults and retirements from a string of top riders. Kevin Staut (FRA) retired to huge disappointment from the crowd and was followed by Bertram Allen (IRL).

There was palpable tension as the tough course beat combination after combination until Ludger Beerbaum (GER) and his chestnut Casello turned the tide and delivered the first clear round. The appreciative crowd applauded as the combination cleared the difficult triple combination in front of the grandstands and cheered with delight as Ludger and Casello finished with a clean scoresheet.

It was a full house at the Cannes showground and the excitement rose as reigning LGCT Champion Harrie Smolders (NED) demonstrated world class form with his top stallion Emerald going clear and ensuring a jump off. With the Top 5 in the overall LGCT ranking out of the jump off, Harrie had a serious chance to rise up the leaderboard.

Rolf-Goran Bengtsson (SWE) was next to win through to the jump off with Oak Grove’s Carlyle producing a super smooth round. The high calibre line up continued to grow as the crowd went wild as Simon Delestre (FRA) and Hermes Ryan entered the sand arena. The atmosphere was electric as the top combination secured a clear round into the jump off. Peder Fredricson (SWE) looked formidable from the start and Hansson kicked out his hind legs emphatically after clearing the final fence.

Cameron Hanley (IRL) on his grey Quirex grey powered round the course with a superb rhythm to a wonderful clear. Hanley wore a black armband in a poignant tribute to the young Irish rider Jack Dodd who tragically died in a road accident this week.

Dutchman Jur Vrieling riding VDL Glasgow and Belgium’s Olivier Philippaerts on Extra joined the parade of stars through to the jump off.

The knowledgeable crowd and guests from all over the world were treated to an exceptional display of speed and precision. Simon Delestre said: “We have seen sport today that is the highest we can see.”

In the jump off Ludger Beerbaum (GER) was first to stop the clock at 42.55s but was quickly beaten by a super fast round from Harrie Smolders (NED) and Emerald in 38.46.

The race was on.

Rolf-Goran Bengtsson (SWE) could not catch them and finished in 39.82.

The temperature soared as Simon Delestre and Hermes Ryan rocketed around the simplified course, but finished fractions of a second behind Smolders in a time of 38.53s.

The bar was set high but Peder Fredricson (SWE) and Hansson were not intimidated. Making good use of Hansson’s long stride, the Swedish star gained time between fences and crossed the finish line in 38.05. Fredricson watched anxiously as Cameron Hanley, Jur Vrieling and Olivier Philippaerts pulled out all the stops but could not beat his time.

The result still means Edwina Tops-Alexander remains overall LGCT ranking leader, but both Harrie Smolders and Simon Delestre have crept up the standings as the series heads to Cascais, Estoril next weekend.

Francois Bourey, LGCT Cannes Event Director: “Jump-offs are always great here in Cannes and there have been some remarkable moments in history made here. I’m happy to see precision and success comes from Sweden, although I thought Harrie’s time was unbeatable, but congratulations to Peder!”

Jan Tops, LGCT Founder and President: “It’s absolutely top sport, this level of show jumping. These courses are very difficult but if you see the level of horses and riders and the ease they do the round, it’s amazing. Uliano [Vezzani] produced exactly the right competition and the best come out on top of the podium again. Edwina is in the lead, she’s been every time in the second round - she has a few good placings. Ben has three very strong results, so he could be the favourite. But Scott is strong! We’re only on the 7th leg, and there’s a long way to go.

“The Super Grand Prix is going to be so exciting. The best 16 champions of the whole season is something really new, and it’ll happen in Prague. I’m really looking forward to that evening.”

Edwina Tops-Alexander, LGCT Ranking Leader: “We’re only half way there, and it’s a long way to go so I’m going to try get back on the podium. So much can change - Harrie’s doing really well again, there’s so much that can happen which makes it really exciting but also puts pressure on myself. I’ve been [to Cannes] the last 10 or 12 years, and it’s fantastic to see the change even from last year - it’s wonderful to have such support.”

Simon Delestre 3rd: “The jump off was really amazing today. I went as fast as I could with Ryan, but in the end they were faster and I could not do so much. I was second last year, and I tried to do my best this year, so maybe I’ll catch [the win] one time. It’s an amazing show, I’ve been here for many years and I enjoy it, but as Jan said we saw top sport today so I’m pleased to be on the podium.”

Harrie Smolders, 2nd: “It’s tough to beat the Swedish! And he was already a few times in the way! His horse jumped incredible and this combination are on top at the moment, and it’s well deserved. Emerald had a few weeks off, and last week I needed to get back in the rhythm. This show I felt him getting better and better, so I had good hopes for the Grand Prix and it turned out very well! I’m looking forward to the rest of the season as I have all my horses in the show rhythm. I have three good results in the Global and hopefully we’ll get more in the next few shows.”

Peder Fredricson, 1st: “I’m really, really happy about the win today. It feels fantastic. And I’m very impressed with my horse. It came at a good time as All In has been out for a few months - he’ll be doing his first show next week - but of course getting this new horse in the stable means a lot. I’m very excited to go to Prague, and I’m looking forward to the [Longines Global Champions Tour Super Grand Prix] - it’s going to be a tough competition!"