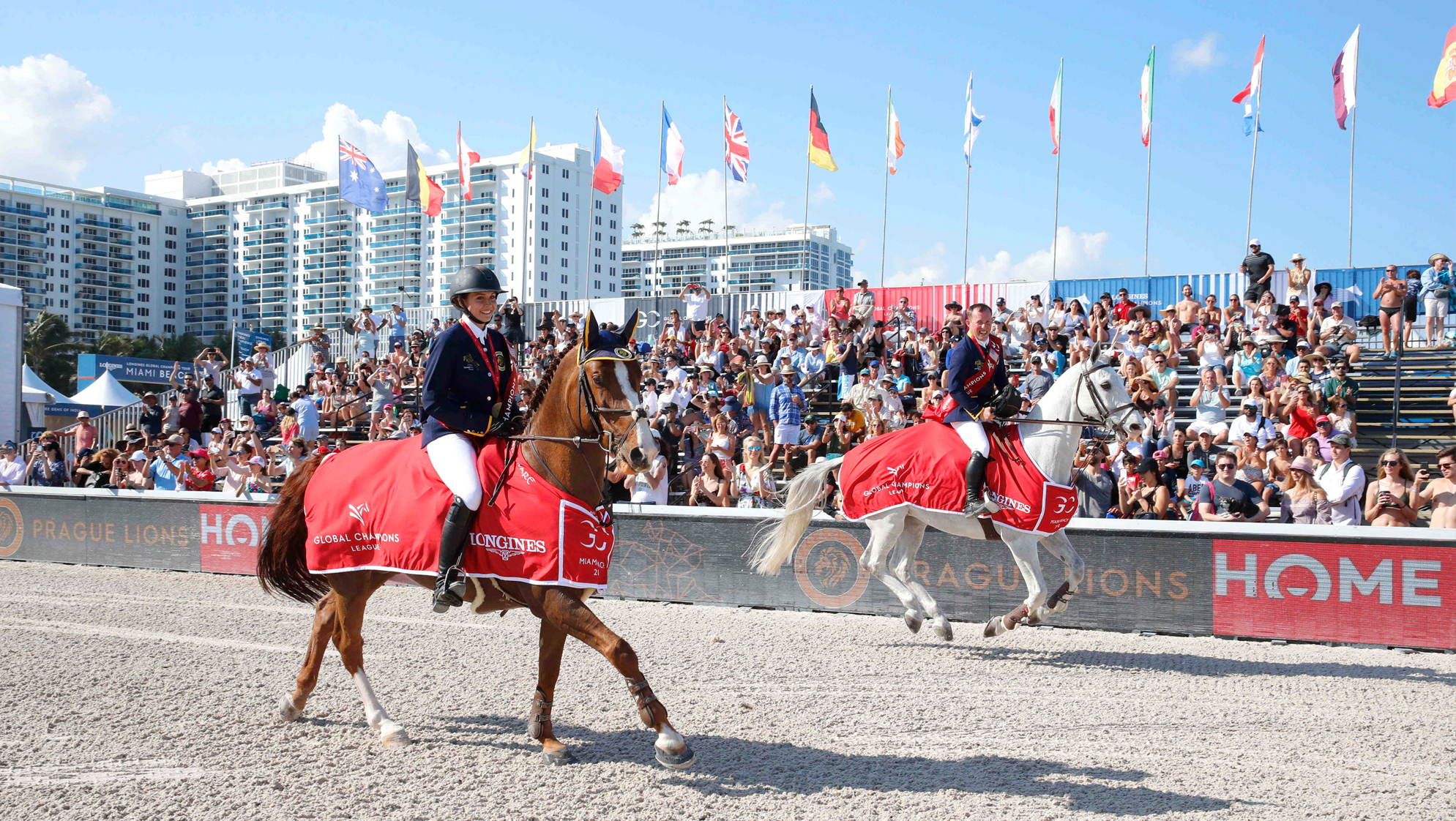 Set next to the effervescent Atlantic ocean, clean jumping rounds were few and far between over the technical, twisting track in the second and final GCL team competition at the Miami Beach. But it was the Prague Lions — a team unchanged from the first round and sitting in third overnight — whose two explosive performances secured them the coveted gold medal at this leg of the Championship race, banking valuable points in their bid to compete in the GC Prague Play Offs.

Both Kellnerova and Schröder sailed clear over all 15 jumping efforts, both picking up a single time fault to take their combined team score from both rounds to eight. The Valkenswaard United team sailed up the leaderboard from ninth to finish in second, and took home the silver medal after strong performances from Alberto Zorzi and Bertram Allen. Monaco Aces, the overnight leaders coming into the second round of this leg, picked up 14 faults in this edition, but just managed to hang on to the bottom step of the podium.

No riders in the top three finishing teams changed horses between the first and second rounds, demonstrating that sticking to proven performers was the winning tactic in this unique sea-side showdown.

The first rider to jump for the Prague Lions team, their under-25 representative Anna Kellnerova, coaxed a textbook round out of the 11-year-old Dutch stallion Classic. Her round was wonderfully judged, prioritising leaving all the fences intact over going for the time, and accepting the one-fault for doing so: team tactics that worked beautifully for both her and Schröder.

“This is a dream,” said the 21-year-old. “I thought we were second but my mum came running up to us and told us we’d won; I was completely shocked.” Referring to winning such a prestigious jumping prize in only her second year of GCL, the young superstar added: “I thought this wasn’t going to happen. Classic jumped his heart out for me out there.”

Her team-mate Schröder has only recently returned to the ring with the magnificent Glock’s London after the stallion had time off to recover from an injury. Now 16, he was focused yet explosive in Miami Beach’s unique arena, twisting with effort and responding keenly to his rider at every fence.

“Anna jumped a fantastic round so I knew I had to stay in touch,” said the Dutchman. “Having London back is very nice; it’s a good feeling.”

The class saw falling poles in all corners, though the most influential fence was the red and white upright of 7a, the first part of the double along the side that was draped with sun-drenched bikini-clad beach-goers. This course had the flavour of a snooker game: riders had to think carefully about the next few shots that lay ahead of them while simultaneously tacking the fence underneath them which came up thick and fast.

This was particularly evident at the influential ocean-side double. Not only was it beneath the big screen and going away from the in-gate but had to be tackled on a related distance from a beefy oxer at fence six — one of three jumps on the course that riders could choose to approach from either a long line, or on a short, daring line. Fence 7a fell 15 times, with the second part of the double of water trays and the innocuous final fence both falling to the floor 10 times apiece. There was not a single fence on course that didn’t fall at least once over this cleverly-designed track.

Only three riders out of the total of 62 who tackled Italian course designer Uliano Vezzani’s obstacles made it round clear and inside the time, with the 71-second limit proving hugely influential.

The fastest of those came from the individual victor, Spain’s Sergio Alvarez Moya, whose classy round on the 11-year-old Numero Uno gelding Charmeur from Sith draw may have lulled others into a false sense of security early on over this testing course. Irishman Bertram Allen, who rode Gin Chin van het Lindenhof to a clear for Valkenswaard United, finished second individually, while Jos Verloy (BEL) was the third and final clear inside the time for the Montreal Diamonds.

After two rounds, Valkenswaard United’s meteoric ride up the leaderboard between the two Miami Beach rounds, coupled with their podium place at leg one in Mexico City, means they currently sit atop the rankings at this early stage of the 2018 season. Today’s winners, the Prague Lions sit second while the Mexico City winners, Miami Celtics, are in third.

The GCL now moves east to Shanghai (28-30 April), which will also be live-streamed as the third leg of the Championship race kicks off.

Jan Tops, Co-Founder GCL: “It’s amazing to be here - it’s a unique spot in the world. This year we were lucky that we could make the arena a lot bigger, which helped a lot the course designer and the riders. The GCL is so exciting, even if you’re in 7th heading into the second round you can still be on the podium - every score counts. The riders want to do well for their team - you have to stay cool. It’s a total opposite to last week in Mexico City with a big grass field. Here is more delicate; the course was very well built and there were faults everywhere. The Lions are doing amazingly - Anna has been very consistent and it’s be nice to see her progress, let’s hope we’ll see them in the GC Prague Play Offs!”

Anna Kellnerova, Prague Lions, 1st place: “I was a little bit shocked with how the year has started, and so far the season has been great. Classic is jumping absolutely brilliantly so I’m over the moon! I actually didn’t know we’d won until my boyfriend messaged me and my mum came over - so I have to say that it was a big surprise.”

Gerco Schroder, Prague Lions, 1st place: “Anna started with a fantastic round, which gave a really good feeling for me! Glock’s London jumped fantastic and I’m pleased we could finish the job. We discussed the course, and decided to go for clears - in the end it was enough!"

Bertram Allen, Valkenswaard United, 2nd place: “My horse jumped fairly well on the first day. We were a little bit unlucky as a team to have 8 faults on the first day - Alberto as ever is consistent and again today he was clear, so thankfully we did well today. We’re lucky enough here, and in Mexico City that we had me, Alberto and Marcus Ehning - all with good horses. So we really had the option to use a third rider like we did in Mexico City; there was a little bit of discussion about that but we said we’d stick to our guns and it paid off.”

Jerome Guery, Monaco Aces, 3rd place: "“I’m very happy to be on the podium. I had a clear round with just two time faults, and the pressure was on Julien - he could do one down, but that was it if we wanted to stay in the lead. After the first fault, the pressure was even more and another fault came. But we’re on the podium and we’re happy with third.”