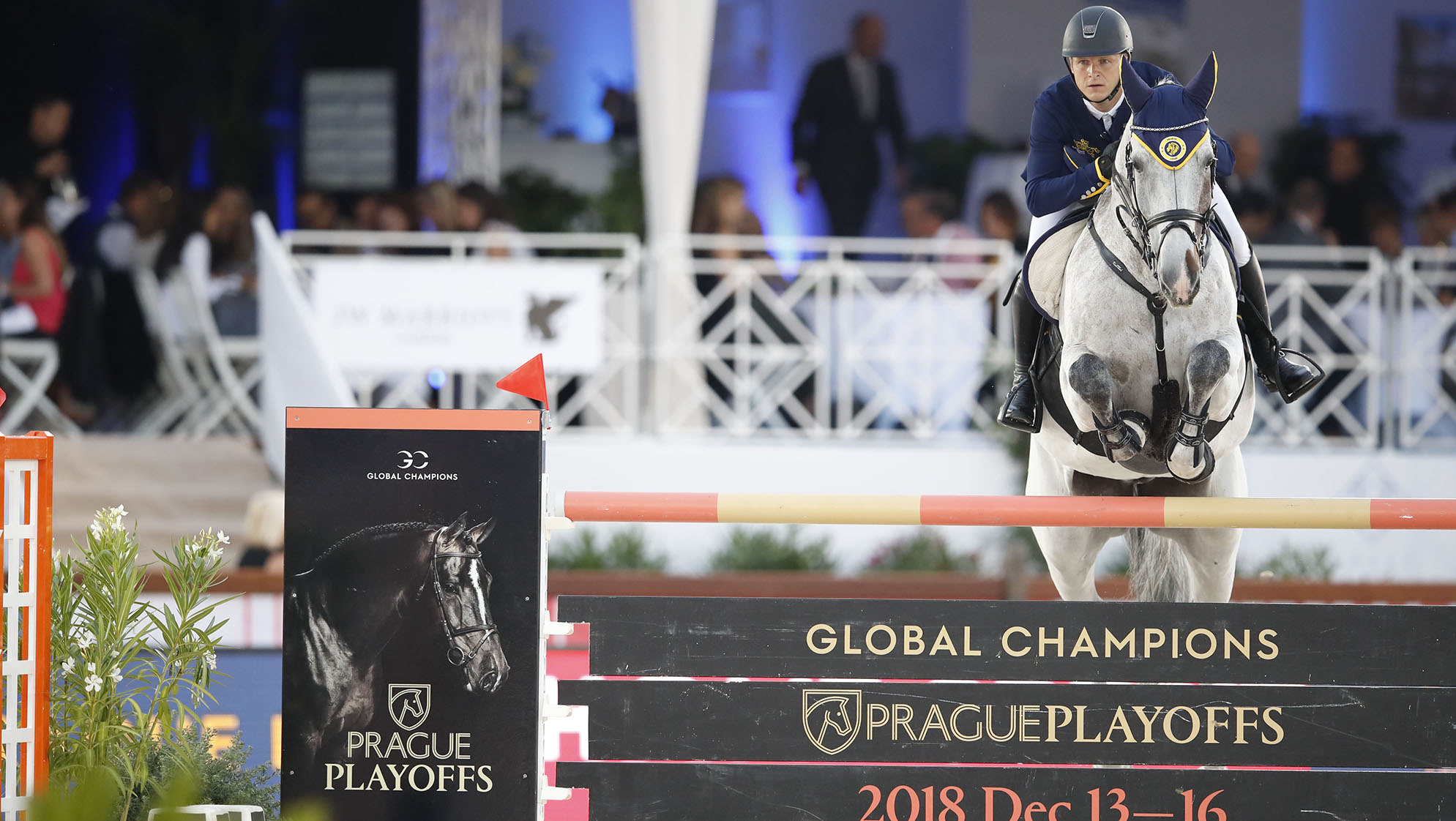 The stars were out in force for a show-stopping first round of GCL Cannes, as the spotlight shone on the Prague Lions duo of Ales Opatrny and Niels Bruynseels in the first floodlight class of the season. One of only two teams to jump double clear, the Lions took pole position, just ahead of Miami Celtics’ Jessica Springsteen and Cameron Hanley.

A thrilled Bruynseels said: “The horses both jumped good, and we did a good round so we’re in a good way! It was not as big today, but it was tricky. A lot can happen on Saturday with only two teams on the clear, but six or seven teams on four, so anything can happen.”

Under the night lights, Uliano Vezzani built a brilliantly technical course, as guests and VIPs walked the red carpet to witness the world’s best fight for supremacy in the City of Stars.

First to go double clear were the Miami Celtics, Jessica Springsteen blazing the way with RMF Swinny du Parc - the young American looking on strong form as teammate Cameron Hanley backed her up with another clear on Quirex. The Celtics took over the leaderboard, with the rest of the world class teams yet to come.

The only other double clear of the day came from the Prague Lions, as Ales Opatrny with the eye-catching VDL Fakir paved the way for Niels Bruynseels with Gancia de Muze to put in a foot-perfect display - quicker than the Celtics to shoot them up to the top of the leaderboard. Their impressive performance was watched by U25 teammate Anna Kellnerova and her mother Renata.

Overall GCL ranking leaders London Knights kept their tried and tested combination of Olivier Philippaerts and Ben Maher, with Philippaerts also sticking with his star mare, H&M Legend of Love, for the crucial first round. Their strategy paid off, with the grey mare giving everything for her Belgian rider, delivering a clear and laying the ground work for his teammate to come.

Ben Maher has become an anchor for the bright red squad, the British athlete jumping 8 rounds of the Championship so far, with 63% of those clear. Today he brought out LGCT Grand Prix of Saint Tropez winning horse, Winning Good, but an unlucky stumble for the 9 year old unsettled their rhythm and they collected the pole from the penultimate fence - putting the team on a score of 4.

There was disappointment for the Shanghai Swans, the burgundy and gold team looking to capitalise on their previous week’s win. But one down and a time fault for Pedro Veniss, and two down for teammate Pius Schwizer with Living the Dream meant the team would plummet down the order, collecting 13 faults overall.

For the first time in history John Whitaker and Rolf-Göran Bengtsson joined forces on a team, the two legends of the sport taking over the reins for the Cascais Charms. First to go was Whitaker, with grey stallion Cassinis Chaplin looking alert as the shadows danced across the arena. An early fence racked up the pressure, and a time fault to boot meant they would be on a score of 5 as the baton was passed to Rolf-Göran Bengtsson with Oak Grove's Carlyle. Only a clear would keep them in the running, and a clear is what Bengtsson delivered - pulling out a class round to keep the team in contention.

There was a shock exit for the home city team Cannes Stars, after Jane Richard Philips collected an unusual 17 faults with Foica van den Bisschop. Teammate Piergiorgio Bucci had everything to do with Catwalk Z, but a further four would put them on a team total of 21.

Bertram Allen of Valkenswaard United was avidly watching from the sidelines, supporting his teammates Jur Vrieling and Alberto Zorzi. Speaking before their rounds, he said “We’re last to go, it looks a good tough course, with no one special place where all the faults come. So riders need to be awake everywhere. It’s not a day where you can have 12 faults and get away with it, you have to be at the top to be in with a chance. But our lads have got good horses, so hopefully we’ll be up there.”

And up there they were after Alberto Zorzi pulled out a clear with top horse Fair Light van T Heike. There was everything to play for as Jur Vrieling took centre stage with VDL Glasgow v. Merelsnest N.O.P. the team looking clear as they headed to the final part of the course. But it wasn’t to be as they clipped the penultimate vertical, dropping them down to a score of four.

So it would be the Lions who shone brightest of all today, putting themselves in prime position for Saturday’s showdown.