Pirates at the helm for GCL Miami Beach, with Swans poised for hat-trick 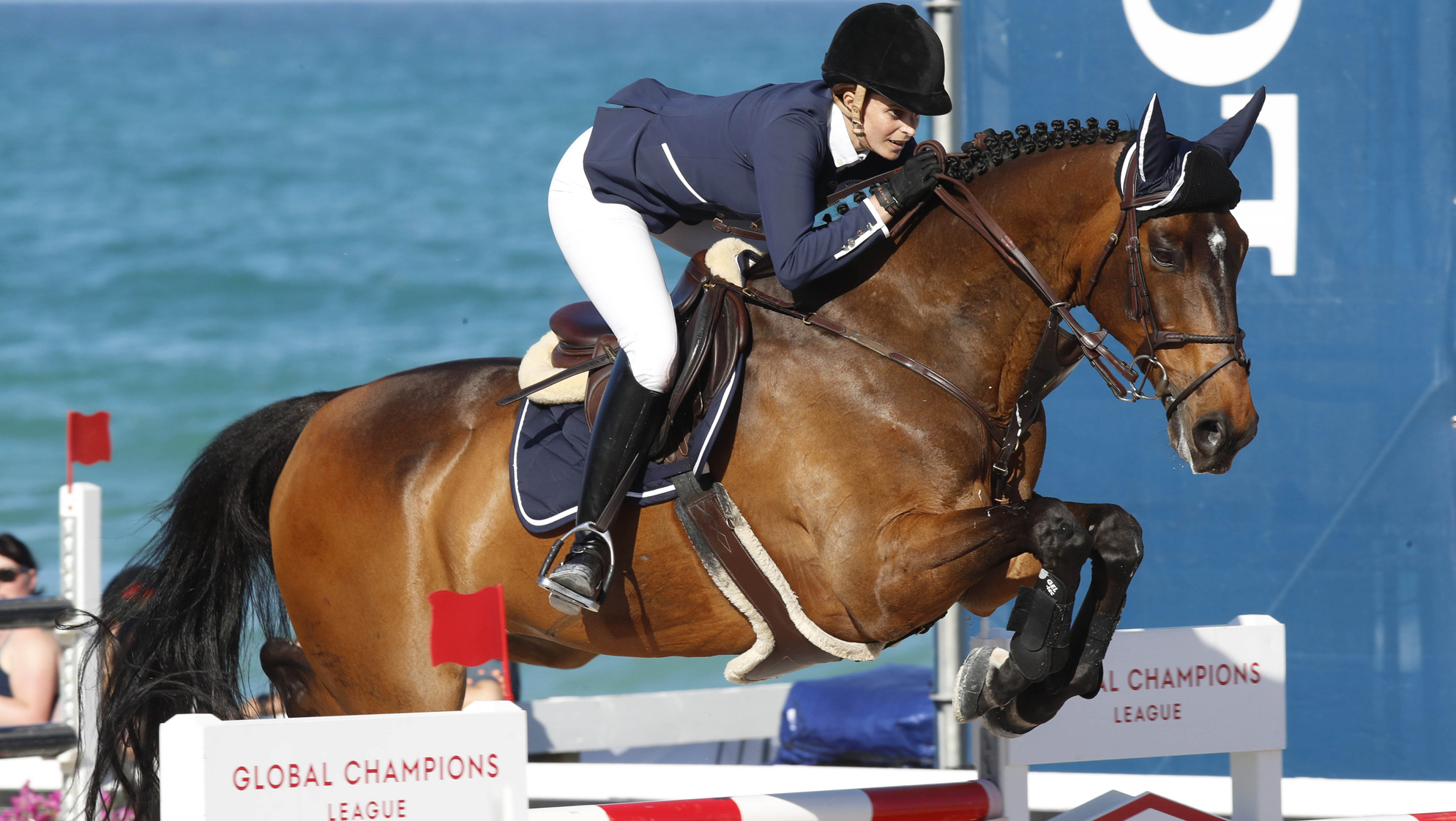 The St Tropez Pirates were the only team out of 16 to leave all the fences up in this blockbuster of an opening class for the GCL team competition, set in the spectacular ocean side Miami Beach venue.

Team riders Pieter Devos and Athina Onassis put a score of three faults on the board between them, with Pieter logging one of only two clear rounds inside the time from the 32 team starters and Athina clocking just three time faults on MHS Going Global.

2018 GCL Miami Beach winners, the Prague Lions, fielded riders Niels Bruynseels (Gancia De Muze) and Anna Kellnerova (Catch Me If You Can OLD) with the team finishing second on five faults. The in-form Shanghai Swans — who have won both events of the 2019 season so far — are in touching distance, sitting in third, also with five faults, but with a slower combined time.

“Athina did a great round and her horse jumped fantastic,” said Pieter, who rode the 15-year-old gelding Espoir. “The course was difficult today with faults everywhere, and the poles were very light. I saw she jumped clear which added the pressure for me as I knew I had to as well! My horse was great.”

The second round takes place on Saturday, with today’s result determining the starting order.

With Edwina Tops-Alexander also present for the Pirates this weekend, Pieter spoke of the team tactics: “It’s only the first round, so it’s great we can start in pole, but Saturday is a new day. It’s a difficult venue as the horses can be distracted, so we saw faults everywhere. We will have a talk together to see who’s going to ride on Saturday, we’re very motivated, so we’ll go for it.”

Some teams racked up heavy scores over the technical track from Italian course designer Uliano Vezzani, with the bogey fence being the first part of the second double situated in the shade and down the long side by the VIPs.

Guests, including Bruce Springsteen, enjoyed the picture perfect hospitality, while visitors from the beach lined the edge of the arena to catch a glimpse of show jumping's superstars.

The home team, the Miami Celtics, are sitting in fourth position on six faults, while the Berlin Eagles are fifth on eight and the Scandinavian Vikings sixth on 10 faults. The scores carry through to Saturday’s final round and determine the starting order.

Margie Goldstein-Engle, who grew up in Miami and rides in the GCL for the first time this season for the Cannes Stars team, said: “The League [GCL] is very exciting; it’s a new dimension to our sport, a great evolution and it’s got so much exposure for our sport. It is great to have people in Miami getting into it and the exposure for showjumping is great. A lot of people look forward to seeing it, you could not have better views.”

Chantilly Pegasus
Constant van Paesschen put a score of 22 on the board after a tough round, clocking up both jumping and time penalties on board Jilbert van’T Ruytershof. His team mate Carlos Lopez and Ulhane De Conde lowered three fences, finishing on 12. The team amassed a heavy score of 34.

Monaco Aces
Jerome Guery had two fences down and one time fault riding the 12-yer-old Celvin, then gave team mate Jos Verlooy some advice before he set off on his round with Caracas. The 14-year-old Casall stallion just tipped the back bar off the oxer alongside the VIP area, which was to become the bogey fence. They also added a time fault, bringing the team total to 14.

Miami Celtics
Home team rider Shane Breen (Ipswich Van De Wolfsakker) added a stride in the tricky line down the VIP long side, and it paid dividends. He finished clear but with one time fault — the best round so far. The second rider Michael Duffy’s horse, the 10-year-old Quintano 35, clipped the top bar off a Longines oxer near the distracting edge of the arena, plus picked up a time fault, giving the team a total of six.

Berlin Eagles
Malin Baryard-Johnsson and H&M Indiana attacked the course, just taking out the top bar of the vertical at the end of the long jumping line by the VIP area, finishing on four faults. Emil Hallundbaek on Chalisco produced a lovely round, just catching the front rail of the final fence to the groan of the crowd. The team finished on a total of eight.

Paris Panthers
Harrie Smolders came to the first on an angled approach, signalling his intent to ride tight lines and take out strides on the scopey stallion but slightly slower stallion Don VHP Z. A very tight turn into the double of verticals caught them out, as well as another rail on an oxer fence. Gregory Wathelet then used Qualido 3’s speed to move forward between fences, but fell foul of both parts of the double of verticals. The team total was 16 after round one.

London Knights
Nicola Philippaerts and H&M Chilli Willi produced a smooth round, but one fence down and a time fault left them on a score of five. The second rider Ben Maher (Don Vito) rubbed the first fence and was sticky into an oxer on the shore side of the arena, which tumbled. The back rail of an oxer on the other side of the arena also fell, giving Ben a score on eight and the London Knights — the 2018 champions — a team total of 13.

Prague Lions
Niels Bruynseels kept Gancia De Muze’s ground speed up for the first half of the course, but he too couldn’t keep up the back rail of the oxer by the VIP area. Anna Kellnerova and Catch Me If You Can OLD, members of the winning team at GCL Miami Beach in 2018, put in a confident round, giving the fences plenty of air, but incurring a single time fault. The team finished on five and took the provisional lead, with team manager Jessica Kurten fist pumping in delight.

Valkenswaard United
Alberto Zorzi and Danique toppled the third last for a four-fault round. His team mate Bertram Allen and Molly Malone V took out the second part of the double of uprights as well as the back bar of the oxer by the VIP. The team finished on 12 faults.

St Tropez Pirates
Athina Onassis went for a tactical steady clear on the big-jumping MHS Going Global and managed to keep all the fences intact, but picked up three time faults. Pieter Devos gave Espoir plenty of vocal encouragement, clicking to encourage the horse, who responded by giving the fences a lot of air and lengthened nicely over the double of verticals. They logged the first clear inside the time, leaving the team on three faults and taking the top spot on the leaderboard, where they would remain.

Hamburg Giants
Simon Delestre’s super scopey grey Filou Carlo Zimequest took out both parts of the second double as well as the Longines oxer, finishing on 13 faults. Second team rider Mathilda Karlsson took long lines on Chopin VA, opting for a smooth round to keep the fences up. Her tactic unravelled at the final fence as the front rail of the oxer fell. She finished on seven, giving the team a total of 20.

Scandinavian Vikings
Christian Ahlmann lucked in on some rubs early in the course, but the second part of the double of uprights finally came down and a time fault put him and Take A Chance On Me Z on a score of five. Evelina Tovek’s athletic mare Dalila De La Pomme jumped out of her skin, but the tricky back rail of 9a in the line at the VIP side of the arena caught them out. Their round also came up against the tight time allowed. They finished with five, giving the team a total of 10.

Doha Falcons
Michael Whitaker and Strides Hilanasterne had an early rail down at the NetJets fence, followed by another before also taking out 9a, the bogey fence of the course. The pair finished on an uncharacteristic 26 faults. Bassem Mohammed and the talented Gunder can usually be relied on for a slick performance, but also had a round they would rather forget, lowering four fences to finish on 17. The team finished on a total of 43.

Madrid In Motion
Eric van der Vleuten and Wunschkind 19 were yet another pair to lower the tricky oxer on the VIP long side, but completed with all the remaining fences up for five faults. His son Maikel followed on Dana Blue, lowering the back rail of the LGCT oxer by the shore first, and then a further three fences to finish with a time fault on 17 and a team score of 22.

Cannes Stars
The team’s first rider Jane Richard Philips Foica Van Den Bisschop made the first half of the course look easy, using sweeping lines to keep a smooth pace, but once again the back rail of 9a came down. The final fence also fell, bringing their score to nine faults. Eric Lamaze followed on Fine Lady 5 and set off at a very fast pace, He clipped the wing of the LGCT fence by the shore, bringing it tumbling down, and then a further fence followed, giving them a final score of eight and the team a total of 17.

Shanghai Swans
Daniel Deusser and Calisto Blue added a stride as he headed towards the bogey fence and twisted dramatically over the final fence but all remained intact and he produced only the second clear inside the time after 31 riders. Shane Sweetnam got some advice from Daniel and set sail on the relatively inexperienced 10-year-old Alejandro. The gigantic jumping horse gave the fences so much air, but clipped and lowered the back rail of the first pair of doubles down the VIP long side. They picked up one time fault, giving Shane — and his team — a final score of five in this round.