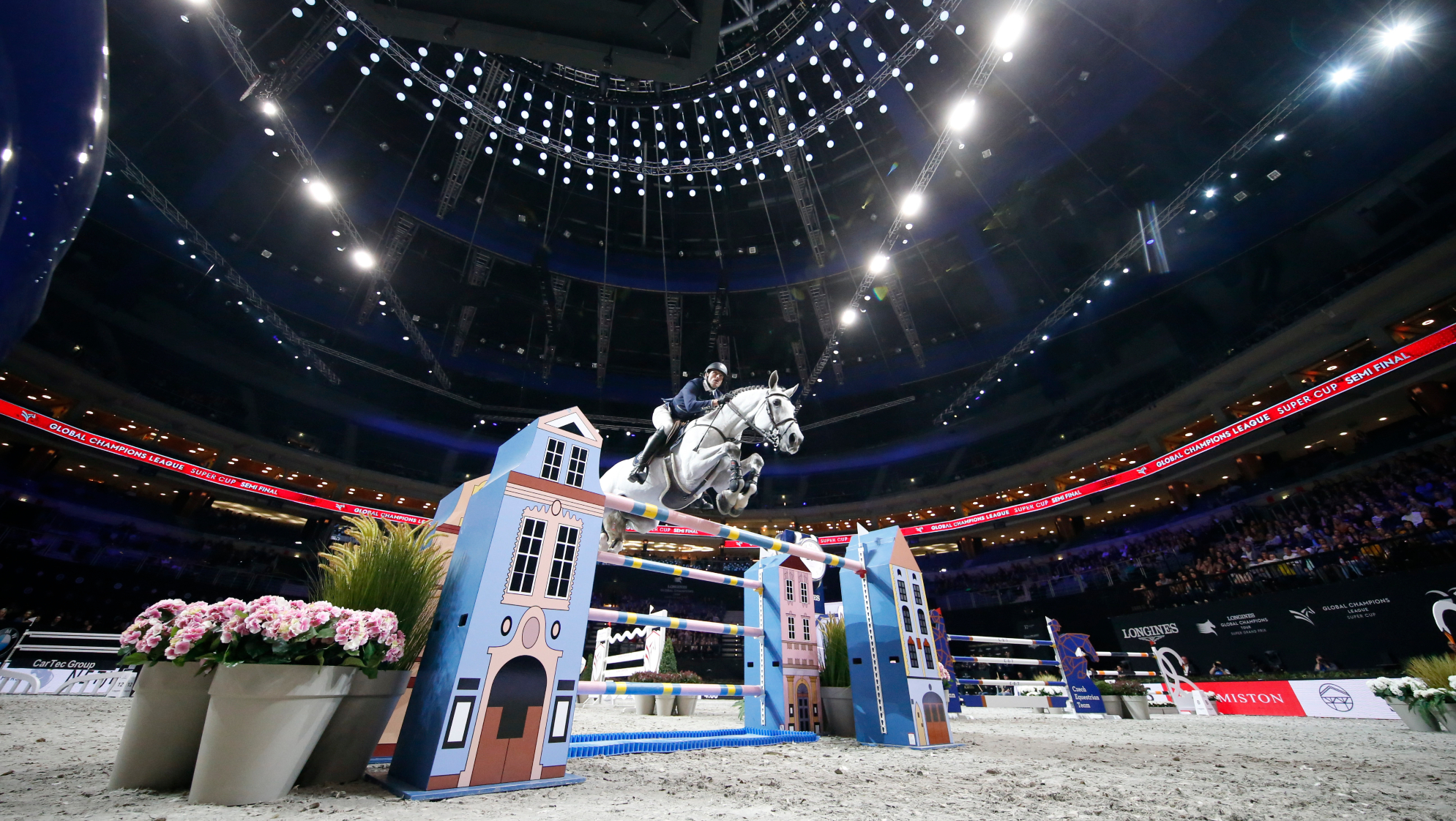 The captivating GCL Semi Final produced a rollercoaster of twists and turns that had the audience holding their breath in the grandstands around the O2 arena in Prague at the GC Playoffs.

The stealthy Paris Panthers rose to the top today with superb clear rounds from Darragh Kenny with Romeo 88 and Nayel Nassar with Lucifer V, while Gregory Wathelet and MJT Nevados S held their score at 4 faults to keep them in the lead and into the Final.

Delighted Panthers team owner Jennifer Gates said: “It’s a great result for our team. Everyone was great today, I’m very proud of them."

Their formidable performance piled pressure on the rest of the teams with Miami Celtics, Scandinavian Vikings and Chantilly Pegasus finishing in the drop zone.

And there was heartache for local fans as the home city team Prague Lions narrowly missed out on a shot at glory, finishing just one second slower on their combined time. Team Manager Jessica Kurten said: “We were disappointed to miss out on the Final by just one second but that is the high level of this sport. Our team have been phenomenal, they performed their absolute best and I could not be more proud of every horse and rider.”

The spectacular climax to the GCL season culminates in the GCL Super Cup Final on Sunday and will see a level playing field as six teams return to compete for the prestigious trophy all starting on a zero score; Paris Panthers, Madrid In Motion, Valkenswaard United, Shanghai Swans, Monaco Aces and Cannes Stars.

Paris Panthers’ Darragh Kenny said: “We are thrilled to be on strong form today. But the calibre of competition is so high and teams will be fielding their best horses and riders for the Final.”

Here’s how the action unfolded:

Valkenswaard United threw down the gauntlet with their first rider, star striker Marcus Ehning and his feisty stallion Comme Il Faut. The expressive stallion had his ears pricked throughout the course, clearly enjoying his job as he tackled the challenging track, the duo keeping their pace up. But there was heartache as the final fence fell, the delicate 1.60m high BMW plank, the team on 4 faults. Next in Frank Schuttert stepped into the team with the 10 year-old gelding Queensland E, but there was disappointment as the first part of the Swan double fell. Final rider to go Cian O’Connor brought back PSG Final, and they kept a tight, smooth round. There was a rattle of the bar down the final line, but they pulled off the clear to keep the team on a total of 8 faults.

To a roar of applause the first of the home city team riders Niels Bruynseels entered the arena with Gancia de Muze, the 13 year-old mare trotting proudly into the arena. Local fans held their breath as the pair cruised around the course, erupting in celebration as they secured a clear. Marco Kutscher stepped up for the team with his 10 year-old gelding Casallvano. But there was dismay as the first fence, the Czech Equestrian Team vertical tumbled to put the team on 4 faults. Once again incredible pressure was on the shoulders of Marc Houtzager who opted to ride Sterrehof’s Dante today. They looked strong until they came a little too flat to the triple bar, and it fell - the team would finish on 8 faults today and slower than United.

First in for the Aces, Laura Kraut brought back her grey mare Confu - the 12 year-old horse jumping responsively for the American rider. They brought home the clear, Kraut beaming in delight as they passed the baton to her next team rider. U25 rider Jos Verlooy was next in with his experienced stallion Caracas, but the first part of the Swan double fell and dropped the team to a score of 4. Last in was Julien Epaillard who again brought out Queeletta to contest the track. The duo set off at a blistering pace but the troublesome Swan double fell again, putting the team onto a score of 8 overall.

First to go for the Scandinavian Vikings Evelina Tovek brought back her 10 year-old mare Dalila de la Pomme, the smooth, smart mare flying around the arena. But the second part of the Swan double fell, dropping the team to a score of 4 faults. Team anchor Christian Ahlmann piloted Clintrexo Z again, the dapple grey stallion attacking the track with determination. But a drop of the hind leg at the second part of the Swan double would see the team score go to 8. Henrik von Eckermann came onto the team with Winnetou de la Hamente Z but there was upset as the wavy plank toppled, and further drama as the they brought down the Prague House oxer to put the team onto a score of 16.

Darragh Kenny was first in again for the Paris Panthers, this time on Romeo 88 - a 10 year-old bay stallion. The team’s tactical horse change paid off, and they delivered the clear. With team mate and owner Jennifer Gates watching on from the kiss n cry, next in was Nayel Nassar with Lucifer V. They too kept cool under serious pressure to bring home a clear, heaping enormous pressure on the shoulders of final rider Gregory Wathelet and MJT Nevados S to keep their scoreboard clean. There were groans as the first part of the Swan flanked double fell, but they managed to finish the rest of the course clear to keep the team on a score of 4.

Francois Mathy Jr and Uno de la Roque survived a lucky touch of the wavy plank, the big horse powering around the arena. But the front bar of the final double came down, 4 faults given to the Pegasus team. Next in U25 rider Constant van Paesschen brought back his black stallion Vendetta Treize but their hearts sank as they had the first fence down. It would be a result to forget today, as they picked up 20 faults to drop the team to 24 overall. Roger-Yves Bost knew there was nothing he could do to save the team, and a further 8 faults with Sangria du Coty would drop the Pegasus team out of the running today.

Jane Richard Philips was first in for the Cannes Stars, bringing out the 11 year-old bay gelding Clipper du Haut du Roy, and they set off at a good pace. There was a scary moment after Richard Philips was unseated after she was bounced out of the saddle, landing on Clipper du Haut du Roy’s shoulders. But remarkably she regained her balance, jumping the next fence clear. But the they came in a touch too close to the Swan double, the first part falling to put the team on 4 - a good result considering how close they could have been to elimination. Next in U25 rider Maurice Tebbel brought back Don Diarado, and they produced a flawless clear for the team. Final rider Abdel Saïd piloted Jumpy van de Hermitage, but took an early pole at the Longines double. Saïd managed to pick the 10 year-old gelding up to finish clear, keeping the team on a score of 8, a fraction quicker than the Prague Lions which became cruicial in the fight to stay out of the drop zone.

First in for yesterday’s highest performers Miami Celtics was Jessica Springsteen with RMF Zecilie, but there was disappointment as the GCL oxer, as well as both parts of the Swan double fell putting the team on 12. Next in was William Whitaker with RMF Cadeau de Muze, the British rider knowing he would have to produce a clear to keep the team in with a chance. They pulled out all the stops and delivered. Final rider in U25 Michael Duffy had all the pressure on his young shoulders with Mullaghdrin Touch The Stars. Once again Duffy had to work hard, but knew his horse inside out and they pulled out a phenomenal clear to keep the team on a total of 12.

Shanghai Swans took to the arena for the first time this weekend, the team benefitting from fast tracking to the Semi Final. First in was the experienced Peder Fredricson with H&M Christian K, and they put in a careful, calculated round. The crowd cheered as they threw down the gauntlet with a foot-perfect clear as teammate Pius Schwizer watched on from the kiss n’ cry. Next in Shane Sweetnam opted to ride his 13 year-old bay stallion Chaqui Z and they looked strong until the turn to the final line - the GC Prague Playoffs vertical falling to put the team on a score of 4. Final rider to go Daniel Deusser brought out his top mare Jasmien vd Bisschop but there was an early surprise as the front bar of the GCL oxer fell. Deusser knew he had to finish the rest of the round clear and fast to keep the team in the running - they did just that, finishing cleanly and the second fastest of the 8 faulters so far.

Madrid in Motion fielded their most experienced rider first, with Eric van der Vleuten and Wunschkind 19 the first to take up the mantle for the team. With last year’s GCL Super Cup trophy fresh in their minds, the duo took to the track but a steep landing after the triple bar gave them no option but to take five strides to the Swan double and once again the first part fell. Next in was son Maikel van der Vleuten with his 11 year-old Dana Blue, as teammates Mark McAuley and Michael G Duffy watched on. But the same fence would fall, the first part of the Swan double hitting the deck once more to put the team on a tally of 8 so far. Final rider Eduardo Alvarez Aznar brought out his star horse Rokfeller de Pleville Bois Margot, the 14 year old bay gelding always a cool customer under pressure. They knew one fence would knock them out of the Final. The crowd held their breath as they tackled the troublesome line to the Swan double, but they left it up - the pair finishing on a score of 8 and quickest of those on that total. They were through.

First in for the St Tropez Pirates was Edwina Tops-Alexander and Casquell, the Australian rider no stranger to success in the O2 arena. But there was early disappointment as the final part of the Longines double fell, before it all came undone down the final line, the pair collecting 16 faults for the team. Dani G. Waldman knew their hopes were dashed, and a further 8 faults with Caspar 213 would cement their result today, with Pieter Devos withdrawing knowing their journey would go no further.

2019 GCL Championship winners London Knights sent in Olivier Philippaerts with H&M Extra first for the team. Philippaerts kept a steady rhythm with the 10 year-old stallion, clearing the troublesome Swan double with ease. But the horse was a touch too deep taking off over the Czech House oxer, hanging in the air and bringing down the back rail. The final BMW plank tumbled too, putting the team on an instant score of 8. The next two riders had to go clear and fast. Next in was Martin Fuchs with his top horse Clooney 51, but the second part of the Swan double fell - putting the team on 12 faults and dropping the London Knights out of the running. Ben Maher and Explosion W jumped an impressive clear round but the Knights’ 2019 GCL Super Cup fight was over.

Tomorrow will see the Longines Global Champions Tour Super Grand Prix, where 18 riders will contest 1.25 million euros in prize money and ultimate individual glory. Tune in via GC TV or via Eurosport at 20:00 to watch the action live.