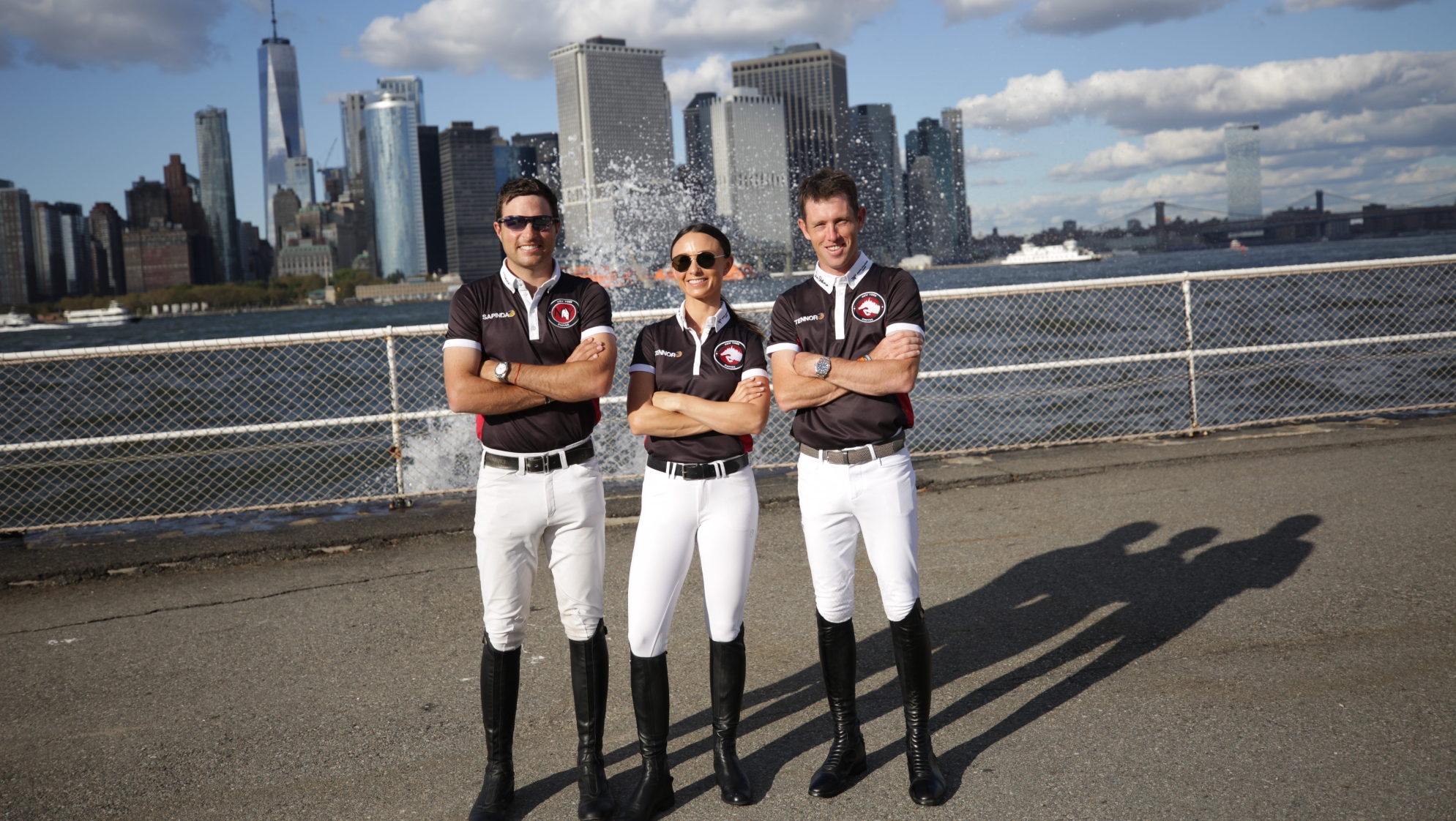 New York Empire riders Georgina Bloomberg, Scott Brash and Daniel Bluman declared themselves "ready for battle" ahead of the team showdown at the first-ever GCL Finals in the Big Apple.

The New York Empire squad touched down in their home City yesterday and took the short ferry ride to Governors Island where the inaugural Longines Global Champions Tour of New York will kick off this Friday - with fans and guests being treated to some of the stunning views ever at a show jumping event.

Under bright blue skies and with perfect temperatures predicted for the event, the team cruised over to the historic Governors Island in eight minutes and as the boat docked they looked back with excitement at the impressive Lower Manhattan skyline and across to the Statue of Liberty.

Proudly sporting the team colours, New York Empire team owner Georgina Bloomberg said; “It is incredibly special to have the best of the best here. This city deserves a great horse show and we are bringing one of the greatest shows, the best riders and the best prize money."

“I think everyone that comes to the event this weekend, who might never have been to a horse show and know nothing about it, will leave as fans. It is a beautiful setting, you get to take a boat and the weather is going to be great but it is also just the best show. It will be top level show jumping with the best riders in the world and amazing horses - it doesn’t get much better than this.”

The home city team have brought serious horsepower to maximise their chances in the GCL Finals which kicks off with the first round on Friday afternoon and the climax on Saturday afternoon where 16 teams will go into combat for the final stage of the 2019 team championship.

Georgina, who was born and raised in New York and whose businessman and philanthropist father Michael served as New York City Mayor, said: “This is where I was born and raised, went to college and where my son was born, it is where all my happy memories are. I am proud to be a New Yorker and to bring everyone here and show them this is incredibly special. Our team is ready, we have come with our top horses and we are ready for battle. To come away with a team victory in the GCL would mean a lot to us. I would love to pull through for my teammates and have their hard work pay off. But as long as they come and they are happy with their experience here, get to see some of the city and hopefully leave being proud to ride for New York Empire."

GCL teams will be going all out to finish in the top four of the overall season ranking which means they will fast-track to the semi finals of the GCL Super Cup at the Playoffs in November.

The battle at the top of the GCL leaderboard is dramatically tight with only two points separating the leading team St Tropez Pirates from Shanghai Swans and with the formidable London Knights squad snapping at their heels too. All are strategically fielding their top talent for this weekend’s Finals. See the GCL Ranking here.

New York Empire star striker Scott Brash said: “New York is an amazing city. Governors Island is a fantastic venue for the horses. It is so important because the Global Tour is all about going to the best cities in the world so you cannot not go to New York. I think it is great that they have been able to find a venue that will accommodate the horses. It is just great to be here and to be a part of it all."

“We are unbelievably lucky to be jumping in New York. It has been a very challenging League (GCL) this year. We have a great team spirit, I think we have a really good team and we are all really hungry for the win here in New York. From the start of the season, we always aimed for New York, we want to win on home turf. We know how much this means to Georgina, I have brought my best horse Mr President, Daniel is on his best one and Georgina has been jumping amazing all season so we are just hoping to be able to deliver and do our best this weekend. We want to win, that is what we are all aiming for.”

Daniel Bluman echoed Scott’s sentiments and said: “To have a horse show in New York City is pretty incredible, the venue is going to be great for the horses and riders, the location is perfect. I am very happy to be part of this team. We have a great team of people who always try their best."

“I am honored to have been selected to ride here and hopefully we can deliver. Georgina is great as a team owner. She is very supportive and understands the sport, she is a rider, a competitor herself so she knows what it takes. It is good because when things don’t go well she understands why but it is fantastic when things do go well because she knows what it takes to win."

“We all have come here very strong with the horses on top form and it is the final event, so you are going to have a lot of teams and a lot of riders looking to finish the season very strong before heading to Prague, so we have to expect very difficult competition. The level is going to be high and there is a lot at stake.”

The action kicks off on Friday at 12:30 local time, with the first round of the GCL competition kicking off at 15:30. Watch live and exclusive via GC TV, on www.gcglobalchampions.com