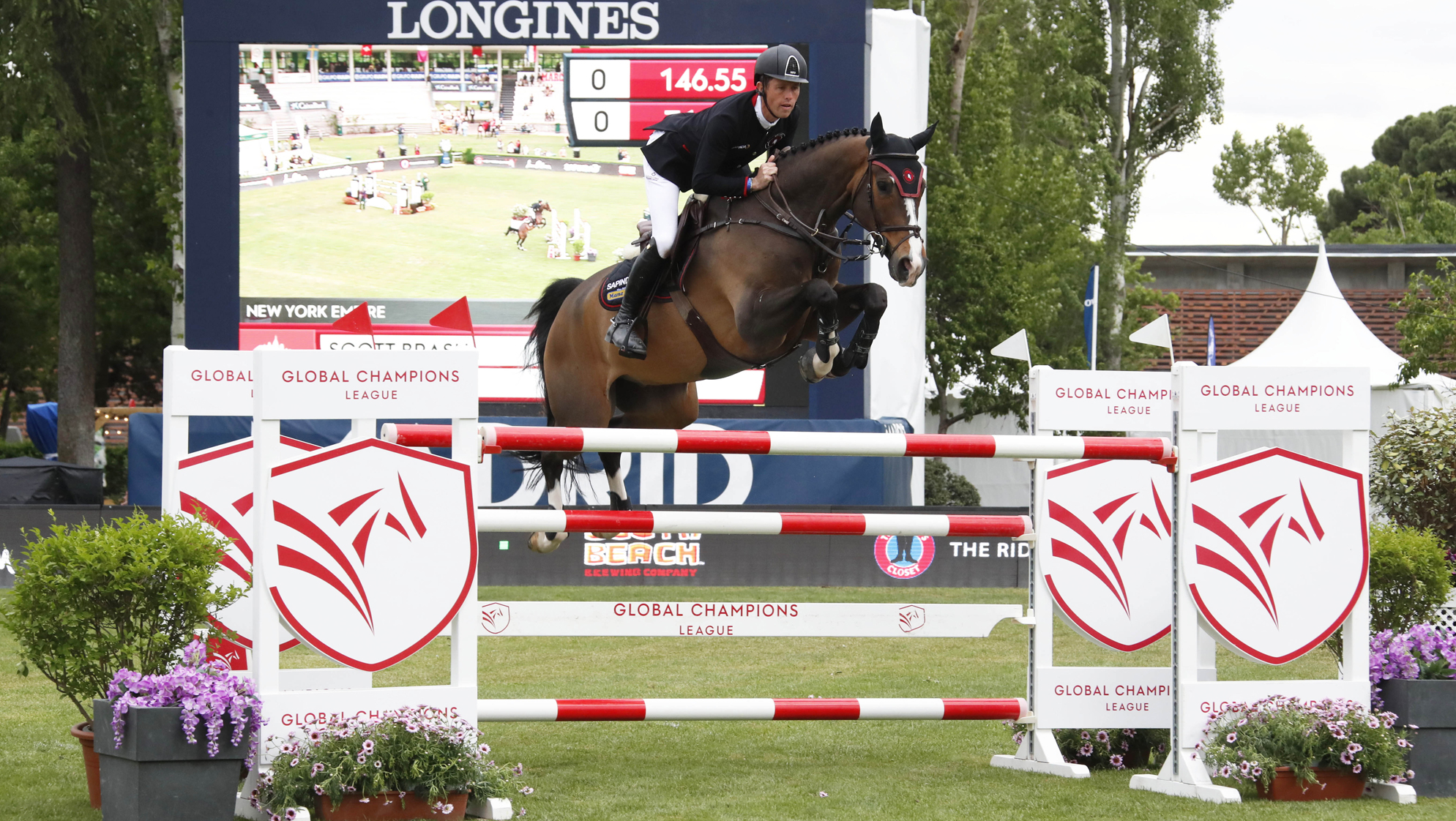 The formidable pairing of Scott Brash with Hello Shelby and Spencer Smith with Theodore Manciais put New York Empire at the top of scoreboards in today’s thrilling GCL Madrid round one. The team were the fastest of six teams on a zero score - a full twelve seconds faster than second placed team Madrid in Motion.

Speaking after securing pole, Scott Brash said: “We’ve improved as we’ve had a few tough rounds, so it’s good to get back on top. We’re not getting ahead of ourselves, but it’s great to be in this position and we’ll try again tomorrow.”

Spencer Smith agreed “We both just did our thing - Scott’s a fast rider and I have a fast horse, so it worked out that way.”

The New York Empire duo will go into Saturday’s showdown in prime position as last to go, with the benefit of seeing the rest of the field compete before them. Second today were home city team Madrid in Motion, with father and son Eric and Maikel van der Vleuten securing a strong result for the popular local squad and third went to last year’s GCL Madrid winners, the London Knights, as Ben Maher and Martin Fuchs teamed up for the first time this season.

The thrilling first round of GCL Madrid saw Spanish designer Santiago Varela Ullastres create a tough but flowing course to test the world’s best teams. With plenty for the horses to look at, poles fell all around the arena, in particular the big Longines liverpool, the tight Caixa Bank treble, and the imposing 1.55m Volvo oxer.

Here’s how the competition unfolded…

First to enter the arena was the Berlin Eagles new recruit for 2019, Malin Baryard-Johnsson bringing out her fiery mare H&M Indiana - a horse who has performed well in both Mexico City and Miami Beach earlier this season. The experienced rider managed her horse beautifully, keeping her in check as she galloped to the delicate fences and finished clear. Watched on by teammate, Ludger Beerbaum, Emil Hallundbaek and Chalisco rose to the occasion, attacking the course with determination and daring his horse to the fences. The duo delivered, bringing home the first double clear of the day.

The Panthers brought out two heavyweight riders in Harrie Smolders and Nayel Nassar - both riders on form at the moment. Up first was Harrie with Don VHP Z, the large striding liver chestnut stallion flying around the grass arena as U25 teammate and team owner Jennifer Gates looked on. The pair made it look effortless, and left all the fences up to keep the team on a zero score. Nayel Nassar brought out Lucifer V for this all-important first round of action. But the second part of the double combination came down, the blue and pink Madrid oxer just taken out as Lucifer landed a little deep in between. The final fence tumbled too, putting the team on a score of eight overall.

Marc Houtzager and Sterrehof's Edinus put in a valiant effort for the Prague Lions, but with the team opting for a steady clear the pair fell foul of the time allowed and picked up a time fault. Only time would tell how crucial that one fault would be by the end of the weekend. The Lions also brought out new signing Wilm Vermeir who piloted DM Jacqmotte for this round of the competition, but an early fence fell - the Massimo Dutti oxer adding a further four faults to their score. Another pole at the Volvo oxer would put the team on a score of nine, with an anxious wait to see how the rest of the field do.

The Falcons brought out team anchor Sheikh Ali Bin Khalid Al Thani for the fifth leg of the championship, this time riding the chestnut gelding Sirocco. But the Caixa Bank oxer tumbled, giving the team a score of four and putting the pressure on the shoulders of Bassem Hassan Mohammed and Gunder. But the troublesome Volvo oxer fell again, and it all started to unravel as the pair picked up 12 faults, putting the team on 16 overall.

Two poles in quick succession for Alberto Zorzi and Danique put the Valkenswaard United team on the back foot, with Marcus Ehning bringing out top horse Funky Fred to try and manage the damage limitation. But another four faults was added to their score as the GC Prague Playoffs fence tumbled when they came too close, and the GC vertical fell to add to their score, putting the team on 16 faults but slightly faster than the Falcons.

Hoping to ride the wave of their recent success in Shanghai, the Aces fielded two heavyweights in Spain. Laura Kraut and Confu made their debut for the Monaco Aces in Madrid, the experienced combination looking a strong choice for the team this weekend. But the Volvo oxer tumbled, as did the delicate GC vertical, putting the team onto a score of eight. Julien Epaillard and Virtuose Champeix had a hairy moment to the first, the chestnut horse looking a little unsettled into the first fence. But Julien managed him brilliantly and they quickly found their rhythm. An unlucky pole at the blue and orange Madrid double combination would put the team on 12 overall, with plenty to do in tomorrow’s second round.

William Whitaker and RMF Cadeau de Muze were the first to take to the arena for the Celtics. The stallion looked fresh, but William managed him brilliantly, riding the triple combination to perfection despite the horse bringing him in too close to the middle. They finished clear and passed the baton to U25 teammate Michael Duffy who brought out the bouncy Quintano - a horse that has delivered plenty of clears on the Championship so far. With team manager Helena Stormanns watching from the kiss n’ cry, the duo delivered - the team the second double clear of the day, but a touch slower than the Eagles.

The New York Empire team tried out a new combination for the fifth leg of the Championship race, with Spencer Smith and Theodore Manciais first to go for the team. The pair flew around the arena, quickest of all, delivering a confident clear and putting the pressure on the shoulders of his teammate Scott Brash. But Scott’s nickname isn’t “The Iceman” for nothing, and the British Olympic gold medallist rode Hello Shelby magnificently to bring home the team’s second double clear of the season, propelling them into first place.

There was disappointment for the Chantilly Pegasus team as brothers Carlos and René Lopez clocked up faults. Carlos Lopez picked up an unusual 12 faults with G & C Arrayan, before René added a further four with Histoire D O to put the team on a score of 16 overall.

Current GCL ranking leaders the Shanghai Swans brought out the experienced combination of Daniel Deusser and Pius Schwizer for the first round of GCL Madrid. Anchorman Daniel piloted one of his top horses, Calisto Blue, the bay horse jumping his heart out for the German rider. With “super sub" Peder Fredricson watching from the sidelines, the Swans looked on confident form, and Daniel secured a strong clear to help put the team on a clear score. Pius Schwizer and Courtney Cox kept cool heads, and jumped clear, but picked up a costly time fault - how crucial could that be in the final result?

The Hamburg Giants would trial a new combination with Bart Bles and Gin D first to go and new recruit for 2019 Lauren Hough with Waterford taking up the second spot. So far this season Bart has always delivered at least one clear on the weekends he jumps for the Giants, and again proved his worth to the team, finishing on a clean score with the grey Gin D. Lauren however would not fare so well, with the first fence - a Longines vertical - falling, much to their disappointment. But they held it together, finishing on the four faults to keep the team at the sharp end of the grid.

The Vikings put forward an all-female team, with consistently strong U25 rider Evelina Tovek and Dalila de la Pomme taking the reins first of all. Watched on by teammate Leopold van Asten, the pair brought home yet another clear, passing the pressure to Danielle Goldstein with top mare Lizziemary - fresh from their LGCT Grand Prix win in Shanghai two weeks ago. The fiery chestnut mare took the tough course in her stride, powering over the fences with ease and keeping the team on double clear.

Last year’s GCL Madrid winners, the London Knights, brought out two serious chargers in Martin Fuchs with Chica B Z and Ben Maher with Explosion W. First to go Martin gave Chica a brilliant ride, the grey mare turning herself inside out to jump the fences for him. A steady clear meant that Ben would have to jump clear and fast to put the team in pole position for Saturday’s showdown, but the crucial element being a clear to keep the team in with a chance of a podium. Ben Maher and Explosion looked fresh and ready, Ben keeping the chestnut gelding quiet over the fences and letting him find his natural rhythm. With team owner Emily Moffitt watching from the kiss n’ cry, Ben and Explosion delivered, putting the team just behind New York Empire on time.

It quickly unraveled for Jane Richard Philips and Foica van den Bisschop, the large horse getting strong to the fences and Jane working hard to keep her together. A time fault to boot, and the pair passed a score of nine to teammate Karel Cox who brought out his top horse Evert. Another horse who looked fresh and keen, Karel had everything to do as another two fences tumble, the team finishing on 17 overall and plummeting to the bottom of the order.

Home city team Madrid in Motion benefitted from a late draw, but had all the pressure on their shoulders to deliver in front of their local fans and team owner Marta Ortega. First to enter the arena was experienced combination of Eric van der Vleuten and Wunschkind, and as the shadows lengthened across the grass arena the pair pulled out all the stops to jump clear. They delivered, passing the reins to son Maikel van der Vleuten and his grey mare Dana Blue. The pair powered around the course, flying to the finish clear and slotting into second, just behind New York Empire.

Final team to go the St Tropez Pirates also fielded an all-female team, with Athina Onassis first up for the Pirates with MHS Going Global. But the GC Prague Playoffs fence fell, putting the team on four. Athina had to circle out of the liverpool oxer, adding time to her score of 12. Edwina Tops-Alexander and Ego van Orti knew only a clear would do to help the team stay in touch ahead of Saturday’s showdown, but their hopes tumbled as the final part of the triple combination hit the floor. The team would finish on 17 overall after a time fault added to their score.

The teams now look to Saturday’s GCL Madrid conclusion, with the action kicking off at 15:15 local time. The full class will be streamed live and exclusively on GC TV, with expert analysis, commentary and rider interviews in the build up to the fifth leg of the Championship race.