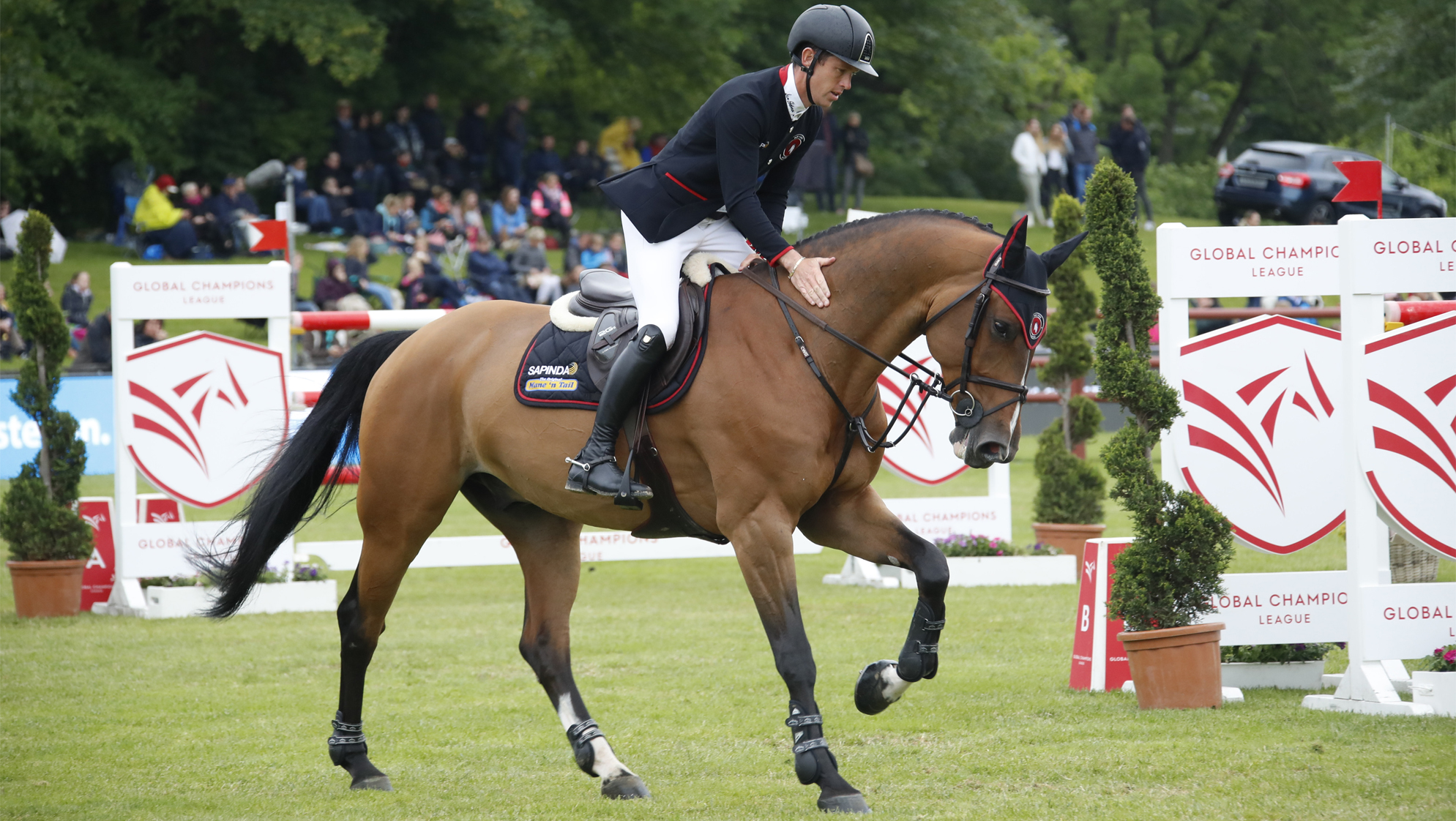 New York Empire have secured their second pole position of the season, and will be hoping to strike back with a third podium result as they look to convert it to a win in Saturday’s GCL Hamburg second round.

Scott Brash with Hello Senator and Hans-Dieter Dreher with Embassy II pulled out another phenomenally quick double clear, finishing a full twelve seconds faster with their combined time ahead of the only other double clear of the day from the Miami Celtics.

A delighted Scott spoke after the result: "The whole team is very happy - there are always going to be ups and downs but the main thing is we have fantastic team spirit, and a fantastic team owner with Georgina Bloomberg. She understands the sport and understands horses, riding herself, so she understands there is going to be ups and downs. We have a great team atmosphere - we all want to win, and it is great we are all looking for the same goal."

Miami Celtics’ Shane Breen with Ipswich van de Wolfsakker and William Whitaker with RMF Cadeau de Muze were the only other team to deliver a faultless round, putting them in prime position for a podium on Saturday. The fastest of the four faulters went to the rock steady combination of Michael G Duffy with Lapuccino 2 and Eduardo Alvarez Aznar with Rokfeller de Pleville Bois Margot from Madrid in Motion.

With only two teams on a double clear in today’s first round of action for GCL Hamburg, and six teams on four faults, there could be a real shake up in the final results following Saturday’s showdown which kicks off at 12:15 local time on 1st June.

In the heart of Hamburg, Germany, Frank Rothenberger set a flowing, galloping course, with plenty of options for riders to take inside turns to save time. The German course designer clearly knows the arena inside out, making full use of the undulating ground to draw horses and riders into fences, with the bogey fence of the day a delicate Longines double of verticals, set on a gentle downward slope and requiring complete control and accuracy.

Scandinavian Vikings
Geir Gulliksen and VDL Groep Quatro were the pathfinders for the first round of action at GCL Hamburg, but an early fault put the Vikings on the backfoot and with a score of four. Local hero Christian Ahlmann brought out top grey stallion Clintrexo Z, and the duo didn’t disappoint - finishing clear and keeping the team’s chances alive for a podium position on Saturday.

Michael G Duffy and the spritely Lapuccino 2 looked on elastic form, the grey horse bouncing around the grass arena however giving Michael plenty to do to keep him straight to the fences. But they came undone in the tight Longines double of verticals, and put four faults on the scoreboard for the team. Eduardo Álvarez Aznar brought out top horse Rokfeller de Pleville Bois Margot - the horse who helped the team secure the inaugural GCL Super Cup at the GC Playoffs last December. The pair put in a steady round, finishing clear with the team’s combined time a full ten seconds faster than the Vikings.

Team anchor Michael Whitaker fielded Strides Hilanasterne for the opening round of GCL Hamburg. But an unusual 12 faults, including a rail at the troublesome Longines double of verticals dropped the Falcons down the order, with teammate Jur Vrieling knowing only a fast clear would help keep the team in touch. But it wasn’t to be as another eight faults with Davall put the team on a score of 20, and with everything to do on Saturday.

U25 rider Jennifer Gates was the first to take up the mantle for the Panthers, riding top stallion Capital Colnardo. They looked in perfect harmony as they powered around the course, taking every tricky fence in their stride. But they got a little too deep to the first element of the Longines double towards the end of the flowing course, Capital Colnado just rolling the delicate pole with his front legs and putting the team on a score of four. Nayel Nassar and Lucifer V took up the reins, the dark bay horse flying towards the fences with his ears pricked forwards. They delivered a foot-perfect clear, keeping the team on four faults and with a real chance of a podium in Hamburg.

Shane Breen brought out top horse Ipswich van de Wolfsakker for the sixth leg of the Championship, the chestnut horse eating up the ground with his large stride. The experienced pair delivered, giving the team a head start with a clear score. William Whitaker knew the team had a real chance of finishing on a clean score, guiding RMF Cadeau de Muze to perfection as they lined up the challenges. Despite the pressure they galloped home clear, with the Celtics shooting to the top of the leaderboard.

Last year’s winners St Tropez Pirates fielded new recruit Olivier Robert for the first time this season, the French rider piloting Vivaldi Des Meneaux. But four faults meant anchor Pieter Devos would need to pull out a clear with Claire Z, his top mare jumping her heart out for her rider. She became a little keen and strong towards the end of the course but Pieter managed her brilliantly through the tight Longines double, the mare on springs as she cleared the fences. They brought home another clear for the team - the fourth in a row for this combination - proving why they are such a valuable asset for the Pirates.

Marc Houtzager and the experienced Sterrehof's Calimero opted for a steady clear but were also caught out by the Longines double, the pair misjudging the stride to the first vertical and taking out the pole with Sterrehof's Calimero’s knees. New signing Marco Kutscher debuted for the team with Chades Of Blue, the German rider looking for a clean score in-front of his local crowd. But an early fault at the yellow and white oxer would drop the team to eight.

The New York Empire team put star strikers from Doha Scott Brash with Hans-Dieter Dreher up front together, the combination working well to deliver a podium at the first event of the year. First to go Scott rode Hello Senator, the ten year old gelding responding beautifully to Scott’s requests. They pulled out a masterful clear, heaping the pressure on the shoulders of Hans-Dieter to follow suit with Embassy II. A lucky rub kept them in contention as the big black horse leapt his way around the arena with a galloping rhythm. They too had opted for a steady clear, and the team’s tactics paid off, the team the second on a clean score and crucially ahead of Miami Celtics on time.

Last event winners the London Knights fielded team anchor and manager Ben Maher first with Don Vito. But an early fault at the first fence put the team on the back foot with the rest of the long course to clear. The experienced rider kept his cool however, keeping the team on four before passing over the reins to Olivier Philippaerts and Cigaret JVH Z. Olivier was hungry to keep the team on a score of four and in touch of a podium heading into Saturday’s showdown, and held the big grey horse steady over the course. But the first part of the Longines double fell again, the pair a little deep to the fence and putting the team on a score of eight.

Roger-Yves Bost had his work cut out with Vino d’Espinet, the chestnut horse fresh and fiery as he pulled around the course. 12 faults for the duo meant Rene Lopez and Con Dios III had everything to do to bring home a clear for the team, but a further 12 faults for the pair dropped the team right to the bottom of the order with a combined score of 24 overall.

Home city team the Hamburg Giants wanted to impress on local turf, with Bart Bles first to take centre stage with Israel v.d.Dennehoeve. The Dutch rider has delivered at least one clear in every GCL event he’s competed in and today kept that record up, bringing home a clean score to keep the team in with a chance. Mathilda Karlsson would take up the reins with top horse Chopin v. But an added stride at the Longines double of verticals caught them out, putting the team on four but still within touching distance of a podium.

Maurice Tebbel, the U25 German rider has always performed well in Hamburg, today fielding Don Diarado to help keep United at the sharp end of the grid. The young gun didn’t disappoint on home ground, bringing out another clear and receiving a huge round of applause for the local spectators. Teammate Bertram Allen rode top horse Harley v. Bisschop but a sudden refusal put four on their scoresheet, plus a time fault to boot, putting the team on five overall.

First to go Malin Baryard-Johnsson and the feisty H&M Indiana proved what a valuable signing they’ve been for the Eagles already this season, delivering yet another clear. The top Swedish rider teamed up with legend Ludger Beerbaum for the first time in history, with the GCL bringing together top riders from different countries. Ludger piloted Cool Feeling around the arena he knows so well but one unlucky fault put the team on a score of four, however at the sharper end of the time sheets following their speedy round.

Overall ranking leaders the Shanghai Swans put together a new combination in Peder Fredricson and Shane Sweetnam. First to go Peder brought out Zacramento, the same horse who performed so well in Mexico City - a similar arena to the one here in Hamburg. But an unlucky four meant Shane and Indra van de Oude Heihoef would have everything to do - another four dropped them down to eight with an uphill battle for Saturday to keep hold of their Championship lead.

An early fault for Karel Cox and his speed horse Evert knocked their confidence and it all began to unravel as they came home with 12 faults. But Margie Goldstein-Engle and Dicas managed to keep the team on 12, finishing clear and within the time.

Final team to go the Monaco Aces brought out U25 star Jos Verlooy with top stallion Caracas. And the long-time combination proved their harmony but delivering yet another clear for the team, passing the baton to the lightning fast Julien Epaillard with Virtuose Champeix. But an agonising four faults would keep them off the zero-score list, but still with a real chance of a strong finish in Saturday’s showdown.

The second round of GCL Hamburg will take place on Saturday 1 June at 12:45 local time, with all the action streamed live and exclusively on GC TV.