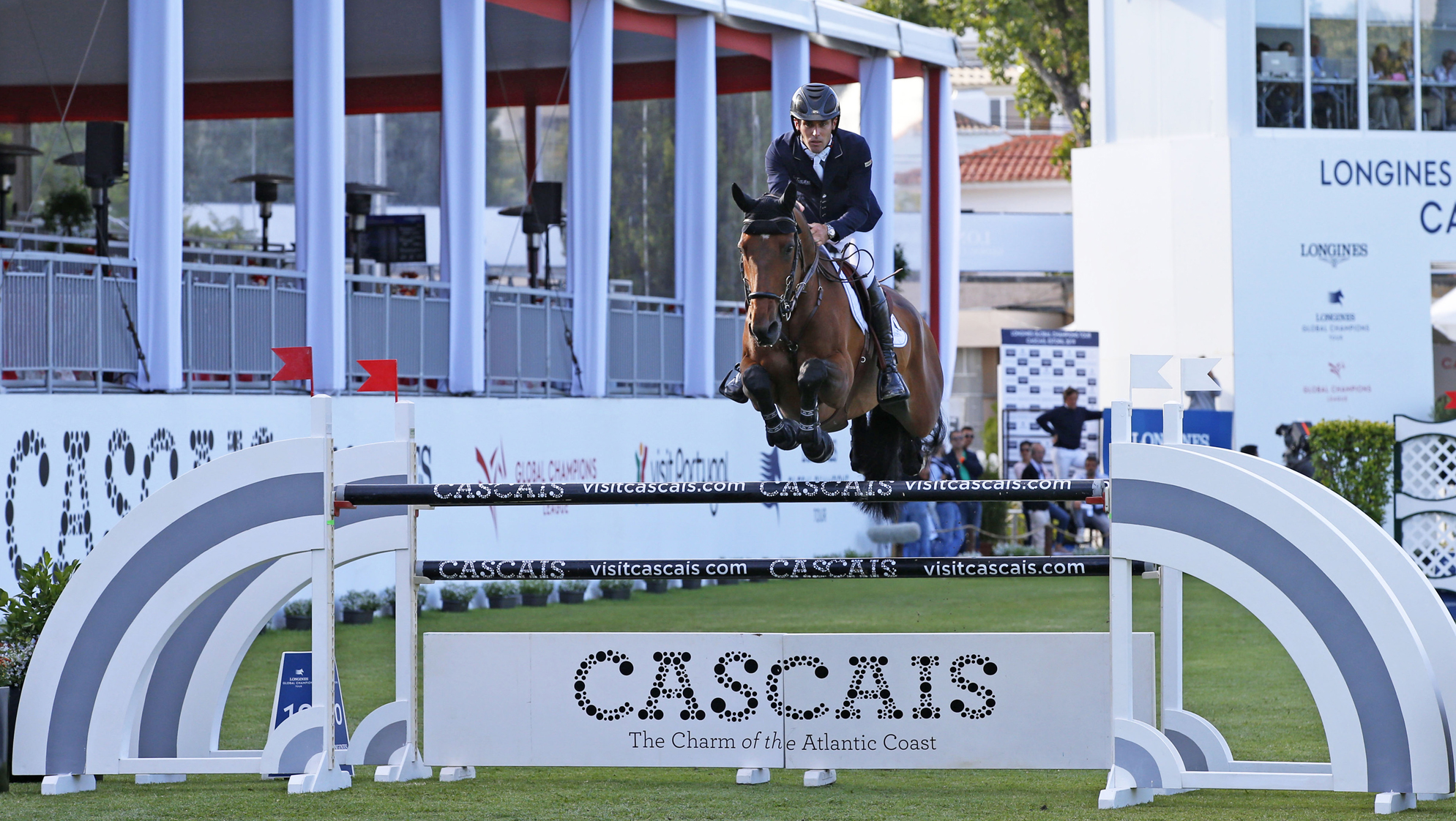 As the sun set on the first day of the Longines Global Champions Tour of Cascais, Estoril and the seagulls circled above the arena it was Mark McAuley (IRL) with Utchan de Belheme who finished on top of the leader board. Young British rider Harry Charles (GBR) picked up 2nd place by just 0.15 seconds with Controe and third place was taken by Olivier Robert (FRA) and the beautiful grey Vangog du Mas Garnier.

A delighted Mark said: “Utchan de Belheme is a really big striding horse, he has a lot of scope and this is a brilliant start to the week."

Frank Rothenberger’s 1.45m two-phase course was tough enough for the first competition of the weekend. Frank gave the riders lots of options to take different lines and left plenty of room for error - with 48 top combinations in the starting line up the winner had to cut every corner possible.

The first combination to tackle the course was Darragh Kenny (IRL) and the striking chestnut with four white socks Classic Dream. They picked up one time fault in the first phase putting them out of contention for the win. The flying feathers of Dani G. Waldman (ISR) and her fairly young gelding Gio W-Z cruised easily round the twisty course and claimed the first clear in 30.16 seconds.

On form Emily Moffitt (GBR) and Copain du Perchet CH rattled the first part of the combination and the oxer following also fell leaving them out of the placings this time. Christian Ahlmann (GER) then flew over the jumps on Ciao Conni St to easily take over the lead and cross the finish line 27.80 seconds. Next to challenge the top spot was Longings Ambassador of Elegance Jane Richard Phillips (SUI) - she jumped clear on Clipper du Haut du Roy but couldn’t match the pace to take over the lead.

Young gun Emil Hallundbaek (DEN) rode a foot-perfect clear on 10-year-old Cool Hand Luke to land himself within the top 15. The crowd cheered as Lucia Le Jeune Vizzini (ITA) and Cabalgaro Z came home with a double clear and finished in 14th. Eric Van De Vluenten (NED) took all the outside turns in the second phase clearly wanting to school Wunschkind round and save her for the bigger class this evening.

Jumping in his bright red jacket, Pius Schwizer (SWI) stepped on the gas with his new horse Vient tu du Rouet. They stormed into the lead with a fast time of 27.06 seconds, leaving the rest of the field to cut some corners in order to take the win.

The first and only combination to turn inside the olive tree was Mark McAuley (IRL) and Utchan de Belheme. This shortcut made all the difference and cut over a second off the leading time to shoot the combination to the top of the leaderboard. The drama then continued as Jose Alfredo Hernandez Ortega's (POR) experienced horse Grupo Prom Rahmannshof Before stopped at the water tray, unseating Jose rather smoothly before they both walked out of the arena to a cheer from the crowd.

Yuri Masur Guerios (BRA) rode a very smooth and fast round on Amor. He would have gone into second place but the turn back to to the last fence was too tight and it fell the same way it did for American Laura Kraut and Hello Guv’nor. Martin Fuchs (SUI) in renowned for going well here in Portugal but he was clearly saving Chica B Z as he didn’t push and finished with one time fault.

19-year-old Harry Charles (GBR) started his week off on the right foot with his 12-year-old Controe, they crossed the finish line less than two-tenths of a second behind McAuley. Home hero Luciana Diniz (POR) produced yet another clear round on the grey Vertigo du Desert but wasn’t fast enough to slip inside of the top 10. Riding the horse he won his first LGCT class on, RMF Chacco Top, William Whitaker (GBR) produced the second to last clear round of the class. The pair weren't going for the win and came home in a respectable time of 31.12 seconds.

The next class, the first round of GCL Cascais, Estoril will commence at 21.00 local time under the floodlights. Tune in via the official GCL Facebook page or watch on GC TV live and for free with expert commentary.