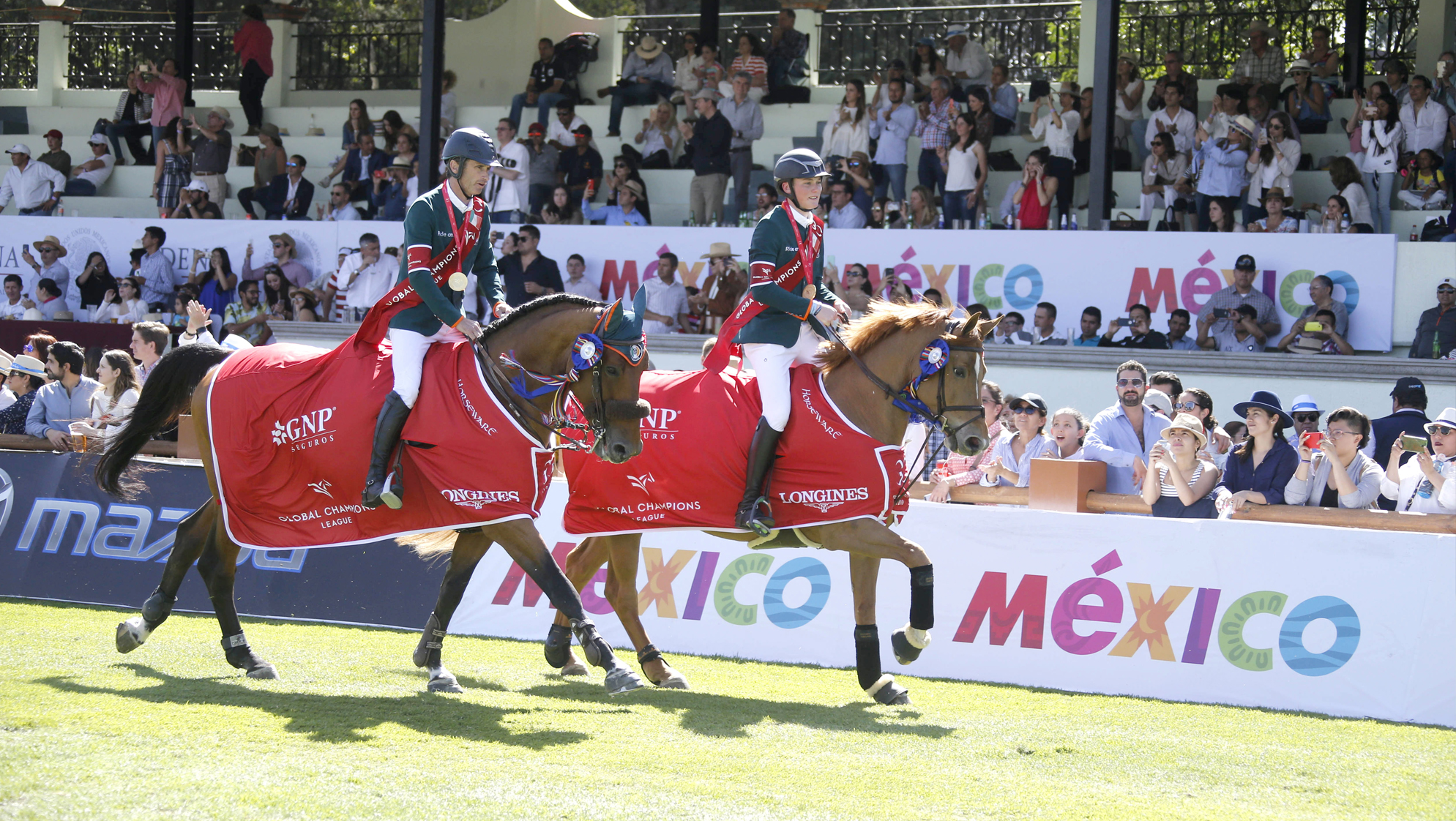 Brilliant double clears from the seasoned Denis Lynch and young talent Michael Duffy propelled them to the top of the podium with the Panthers in second and Valkenswaard United in third place. Tension remained high right up until the last rider in the last team as team fortunes rose and fell in dramatic fashion.

Under-25 Miami Celtics rider Michael Duffy said: “This is what we all get out of bed in the morning for – this is the level everyone aspires to be at and these are the best shows in the world, so for me it’s a dream come true. We delivered the goods today, and the plan is to stay at the top!”

Nineteen teams, including several new squads, were on the starting grid for the first leg of 2018 and the stakes are higher than ever. The GCL regular season of 16 events climaxes in Doha followed by the big new showdown at the GC Prague Play Offs in December.

Under brilliant blue skies and the extraordinary giant Mexican flag fluttering over the arena, the team contest got underway with thousands of spectators and guests creating a vibrant festival atmosphere.

The course on the immaculate grass arena at Campo Marte set a serious test with connecting lines and plenty of opportunities to cut corners. A flimsy 1.60m vertical to finish proved costly and heartbreaking for many.

Run in reverse order of merit from Friday’s opening round and carrying their penalties with them, the teams set out in determined mood. The new format saw the two team riders starting directly one after the other to deliver the team score and adding to excitement for fans.

There was disappointment for New York Empire’s David Will and Scott Brash. But the competition came to the boil with the new Prague Lions team with the combination of Gerco Schroder and the fresh-looking Glock’s London and Under-25 rider Anna Kellnerova with the 11-year-old Classic. Their double clear put them back in the mix on a final score of 17.

Shanghai Swans fielded a new rider from their roster, Daniel Deusser with Tobago Z, and they were just caught by the double for a four-fault round while second team rider Shane Sweetnam returned on Main Road and punched home with a brilliant clear for a total of 20.

The temperature soared as the powerful team of the Rome Gladiators upped the pace once again with Friday’s winner Lorenzo De Luca, this time riding Halifax van het Kluizebos, going clear before Abdel Said and the scopey Jumpy van de Hermitage’s eight faults put them on an equal score of 17 with Prague Lions, but ahead in the rankings due to their quicker times.

Hamburg Giants looked rock solid this week and stood fourth overnight, but ended with 25 on the score card, dropping down the order as the Miami Celtics continued to rise.

The final results were balanced on a knife-edge. London Knights’ new recruits, twin brothers Olivier and Nicola Philippaerts, were just one point behind the overnight leaders Paris Panthers, but they picked up 12 penalties and victory fell out of their grasp.

With just a fence in-hand, the Panthers powered into the ring, but Darragh Kenny drew gasps as the first fence fell and, when a second rail fell in the Longines double, the Miami Celtics were declared triumphant. However, their speed paid off as they beat Valkenswaard United on time to take the runner up spot.

GCL Co-Founder Jan Tops: “This setting here in Mexico City is unique, historical, but best of all are the people — the crowd is unique, very enthusiastic and very warm, but for everybody. As a rider, as a guest, everybody feels this. As the sport went today I think the new concept is great — going directly after each other it’s much easier to follow, so we’re improving every year. Also today you saw the team which won with a new young boy in the team and that’s great to see. They came from fifth place to win and that shows that still everything is possible and that’s what we want, intensity to the last. It came down to the last rider of the last team, the Paris Panthers did great both days, just getting beaten by Miami, but it was fantastic.

"As the organizer and sport lover, this year there are 10-15 who could win; you just don’t know who is going to win at the end. In every sport in the world, if you look to Formula 1 or soccer, it’s down to three or four teams, but here we have more than 10 and it’s fantastic.”

Michael Duffy, U25 rider of winning team Miami Celtics: “When I got the call a few months ago to be asked to be on a team was a dream come true. So it was a great start and to come here and win on the first event is a great start for the season — let’s hope we can stay there. Teaming up with Denis Lynch was absolutely brilliant because me being a little green at this level I made a silly mistake yesterday, I pushed too much into the double, and luckily enough he gave me a team talking and a slap on the wrist and it was a good education for me and made a massive difference. Thankfully my mistake didn’t cost in the end. This is what we all get out of bed in the morning for – this is the level everyone aspires to be at and these are the best shows in the world so for me it’s a dream come true and what better stage to show yourself on?"

Gregory Wathelet, of second placed Paris Panthers: “Today we were not as good as yesterday. I knew I could have one down but I could not be too slow to stay ahead of Valkenswaard, so that’s why I tried to play a bit for that and also for myself. It worked. The new system is more clear, easier to follow, and you could see that things could change so quickly — we could be the winner today or we could also be fifth or sixth.”

Marcus Ehning, of third placed Valkenswaard United: “For me it’s the first time here in Mexico and I’m really impressed by the show, it’s a really amazing show. Today we were hoping more to get to the lead, but we both had one down in the second round. But at the end it was a good start for us and we still have space to improve.”