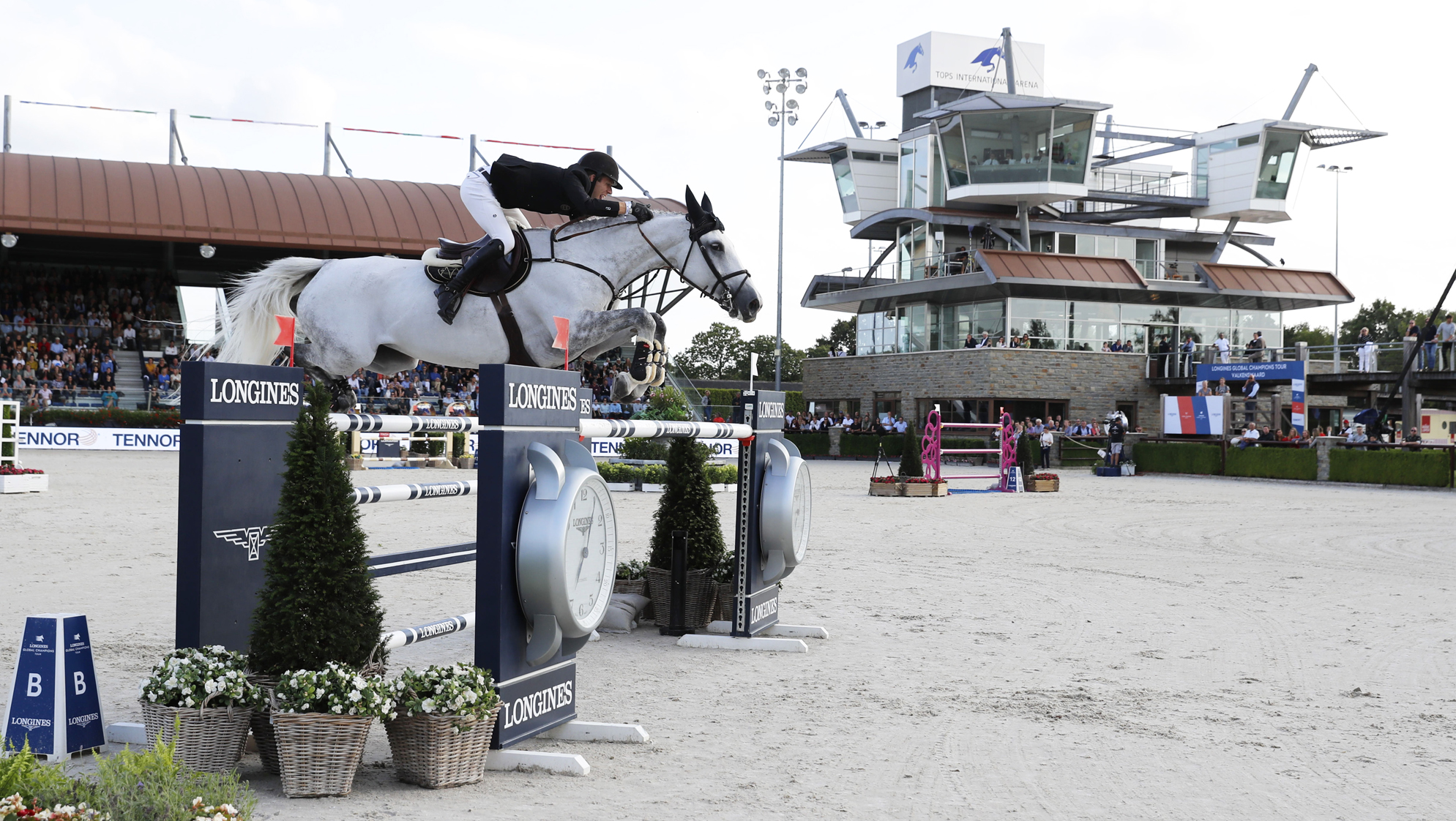 In an afternoon of non-stop sporting drama Dutch star Maikel van der Vleuten (NED) faced down the heavyweights of the show jumping universe to pull off an extraordinary home win in Valkenswaard.

It was van der Vleuten’s second Longines Global Champions Tour Grand Prix win this season and he praised his 11-year-old grey mare Dana Blue, owned by Marta Ortega, saying: “She is a great mare, she always fights for me. If you see the many good riders in the jump off you can do no more. It is a real pleasure for me and very nice to win in front of the home crowd and the first time in Valkenswaard, so it is a big one for me.”

Today’s LGCT Grand Prix of Valkenswaard Presented by Tennor at the magnificent Tops International Arena left the crowd mesmerised as some of the biggest names in the sport failed to make the grade in dramatic fashion.

Van der Vleuten is already qualified for the LGCT Super Grand Prix at the GC Playoffs in Prague later this year, meaning Olivier Philippaerts (BEL), second in today’s big class will join the star-studded line up. Clearly delighted Olivier said: “I am really happy I am qualified for Prague, it is a very, very good day.”

Today’s results saw Pieter Devos (BEL) extend his lead in the overall LGCT championship ranking pitching him 14 points ahead of Ben Maher (GBR). He vowed: “I'm not going to give it away so that's [the plan] - to put the pressure on." Kevin Staut (FRA) and For Joy van’t Zorgvliet HDC finished in third place today and jump up to third position in the overall LGCT ranking only two points ahead of Maikel van der Vleuten in fourth and Daniel Deusser (GER) dropping down to fifth.

Jan Tops said: “I think everybody today was rooting for Maikel. He had a great season already. It is fantastic to see how much he has accomplished already so young, he is a great athlete and to see him win here in his area is fantastic. I think the footing is fantastic, the grip is great. Uliano did a great job. The sport was fantastic. Every sport dreams to be in this position at the end and I feel that we'll see the winner in New York."

Course designer Uliano Vezzani set a supreme test with big, bold challenges one after the other requiring serious power and experience. The course was populated with substantial oxers including two with water trays, an imposing triple bar early on and plenty of eye-popping tall verticals.

Under sunny skies and in breezy conditions the crowd settled in for an afternoon of world class sport as the LGCT season races towards the finals in New York at the end of September before the GC Playoffs in Prague in November.

Pathfinder Spencer Smith (USA) and Theodore Manciais had the windmill second fence down and fell victim to the purple vertical finishing on 8 faults in a taste of what was to follow.

There were several surprise retirements including Max Kuhner (AUT) and Cornet Kalua, Peder Fredricson (SWE) and Catch Me Not S, Bassem Mohammed (QAT) and Gunder and Edwina Tops-Tops-Alexander (AUS) and Veronese Teamjoy with a sudden refusal at the Longines triple combination.

There were other shocks in the first round. Henrik von Eckermann (SWE) and Forever were eliminated after the 9-year-old bay gelding had two stops at the wide white Alpha Street Car triple bar. And Christian Ahlmann (GER) and Take A Chance on Me Z ended on an uncharacteristic 12 fault tally. After falling foul of the Tennor vertical as well as the Longines triple combination and the purple vertical near the end of the track.

Eric Lamaze (CAN) and Firkov du Rouet looked on course for a clear but it fell apart in the final stages for 8 faults.

But the first clear was delivered in emphatic style by Olivier Philippaerts (BEL) and H&M Legend of Love with the grey mare clearly relishing the challenge of the big track and rising to the occasion.

Simon Delestre (FRA) and the super talented 14-year-old chestnut Hermes Ryan managed to pilot through the challenging lines and despite a wobble towards the purple and green oxer they stayed clear triggering the jump off to loud applause.

Christian Kukuk (GER) swiftly followed with another classy clear on the bay gelding Quintino dismaying amazing agility and looking formidable for the jump off.

Strong contenders including Gregory Wathelet (BEL) and Picobello Full House Ter Linden Z and Jerome Guery (BEL) and Quel Homme de Hus were caught out by the expansive oxers and combinations to put them out of contention.

Georgina Bloomberg (USA) came close to a clear, straight after helping her New York Empire team to victory in the GCL final, but took 4 faults at the final fence despite a polished round with Quibelle. Ranking leader Pieter Devos (BEL) and the 14-year-old Chestnut Apart left the ring in frustration after the back rail of the oxer in the double combination tumbled.

Dutch hopes rose and Maikel van der Vleuten and Dana Blue did not disappoint becoming the fourth combination into the jump off to cheers from the crowd. Fellow Dutchman Harrie Smolders (NED) had the luxury of both horsepower and experience in Don VHP Z NOP.  With encouraging whistles from excited home spectators the 15-year-old stallion displayed his legendary star quality and became the second Dutch contender in the jump off.

It was a feast of show jumping talent for the crowd and international viewers as Marcus Ehning (GER) and Cornado NRW made their years of experience count with perfectly judged strides leading to a superb clear. Kevin  Staut (FRA) and the 14-year-old bay gelding For Joy van’t Zorgvliet HDC had a few knocks but their luck held as they joined the jump off line up.

First to go Olivier Philippaerts and H&M Legend of Love got a big reception and delivered an efficient and clean round with good pace going clear in 37.34, but it left the door open.

Simon Delestre and Hermes Ryan were fast from the off getting away with a super quick turn to the LGCT vertical. They were faster after the double combination but took the angle too sharp to the sizeable Stal Tops oxer and clocked up 4 faults in 38.70.

Christian Kukuk and Quintino took it steady to the first fences and were far off the pace of Philippaerts’ mare. It was a tactical and impeccably ridden round to ensure a clear but was way off the time.

Maikel van der Vleuten and Dana Blue were met with warm applause and the crowd watched every move intently. There were gasps as the combination were lucky at the Tennor vertical but were slightly slower than Philippaerts out of the Longines double. But van der Vleuten took a brilliant turn to the purple and green oxer and flew along the big distance to the final Longines vertical stopping the clock in 36.80.

With patriotic passion running high Harrie Smolders, intense concentration etched on his face, set off on Don VHP Z NOP.  With a massive effort and a great angle to the LGCT vertical they were still slightly slower after the double combination. A brave gallop to the last saw them soaring over the final Longines upright going clear but slower in 38.38.

Next up in the stellar jump off field was Marcus Ehning and Cornado NRW and they were fast to the first and took an impressively sharp angle to the LGCT vertical. The pair made up speed with a charge to the Stal Tops oxer slicing the angle again and coming home clear but in 38.56.

Kevin Staut and For Joy set off fast but there was a wobble at the Tennor vertical losing pace. They were razor sharp to the huge green and purple oxer and clinched the clear in 37.44 to take third place.

One of the fastest combinations Julien Epaillard and Virtuose Champeix were like lightning to the LGCT vertical but lost out at the double combination with both parts falling for 8 faults.

The LGCT championship race moves to the Eternal City of Rome for the 16th leg of the season.