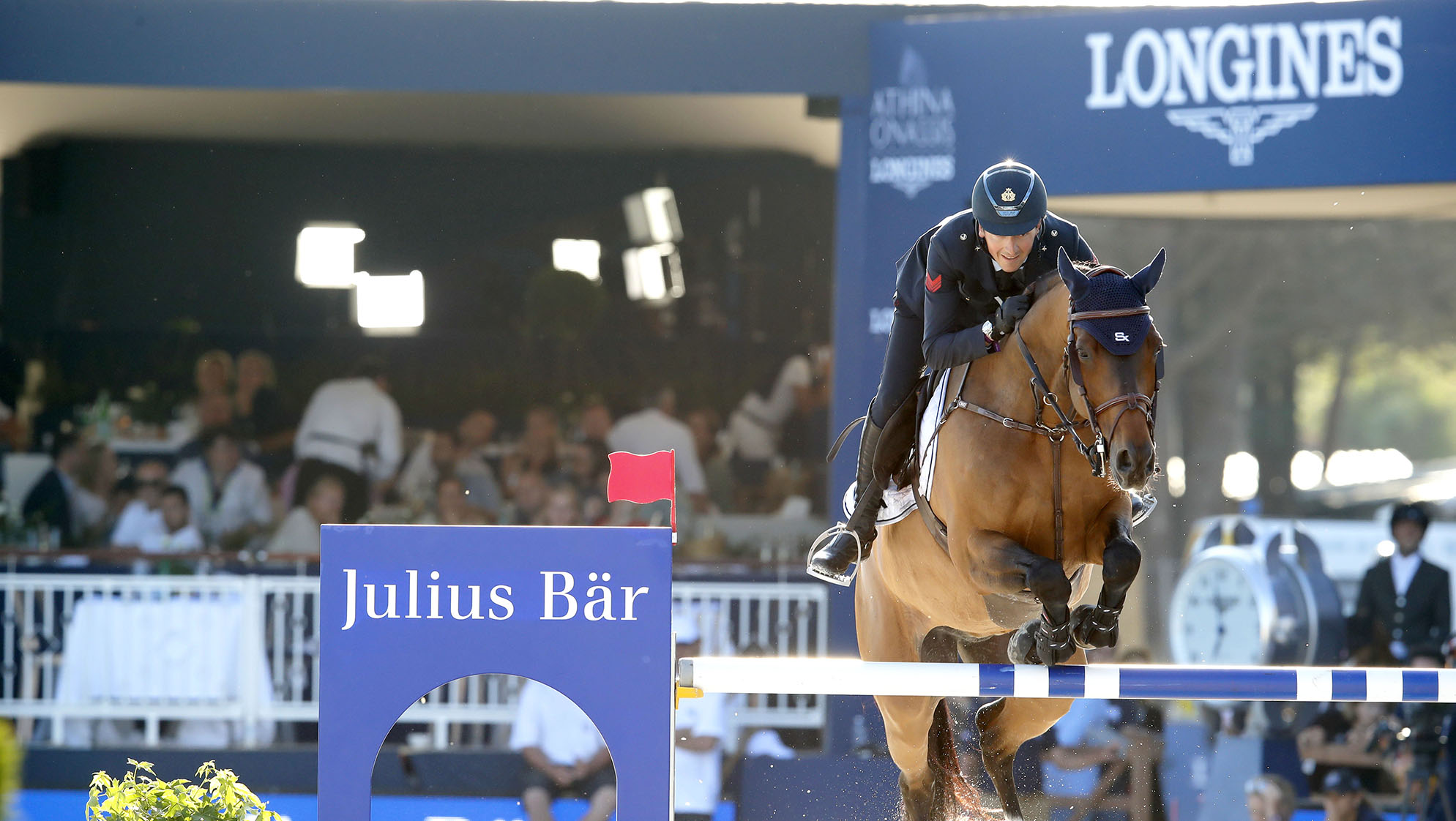 Lorenzo de Luca (ITA) and De Flipper triumphed at the second day of the Longines Global Champions Tour of Saint Tropez, Ramatuelle, with a brilliant win in the CSI5* Julius Bär Prix.

As the sun began its slow descent over the world-famous Pampelonne Beach, the Italian speed merchant topped a 10 rider jump-off to take the win, just fractions of a second ahead of reigning LGCT Champion and World Number 1 Harrie Smolders (NED) with Zinius and Alberto Zorzi (ITA) with Ulane de Coquerie, who took third.

A beaming de Luca spoke after his win, “My horse is really fast, but it’s the first jump off in a big class for us. He did a fantastic job, he’s very consistent and confident. It’s an amazing show and I’m glad to be here!”

There was a distinctly cool Mediterranean vibe at the Longines Athina Onassis Horse Show, now part of the Longines Global Champions Tour circuit, as fans and guests enjoyed top sport as well as world famous brands in the chic pop-up shopping village.

Denis Monticolo, LAOHS Event Director, spoke in an earlier GCTV studio about how special the addition of the show was to the LGCT Championship calendar: “We are here in Ramatuelle, a few metres from the beach and all the people and activities create an atmosphere that is magical. To be part of the GCT family, we are really proud. It is now the most important product in the world in terms of show jumping. We look forward to the season developing, the Play Offs in Prague, the Grand Prix and GCL here - it will be fantastic.”

Rémy Bersier, Member of the Executive Board for Julius Bär and presenting sponsor for this class agreed: “We enjoy very much being here, this is one of the majors. Sponsoring is about what money can’t buy, sharing special moments with clients. Strategically the kind of event we are sharing with the people here is about team spirit, working on details. You see the horse, you see the rider, and it’s about teamwork, like partnering with our clients.”

Uliano Vezzani’s course featured a delicate Dolce & Gabbana floral vertical to start, a purple treble combination set across the diagonal of the arena, and a challenging Julius Bär double of liverpools. While the course looked straightforward to walk, it was anything but simple to ride.

Poles rolled all around the arena, with the world’s best tested time and time again by Italian course designer Vezzani's skill. Riders needed foot-perfect precision in the treble, with many caught out by the striding in and out of the gappy light purple fences.

The last fence caused a few heartbreaks, catching out the likes of Bertram Allen (IRL) with Izzy By Picobello and Sheikh Ali Bin Khalid Al Thani (QAT) with Sirocco - both agonisingly close to a spot in the jump-off.

First to go clear was Olivier Philippaerts (BEL), the Belgian talent piloting Extra around the arena and the watching spectators as he pulled a clean round out of his hat, Extra jumping his heart out for Philippaerts.

Anna Kellnerova (CZE) and Silverstone G pulled out all the stops in the tight sand arena, her trainer Jessica Kürten riding every stride from the ‘kiss and cry’, cheering in delight as the young star finished on a zero score. She was quickly joined by LGCT Champion and World Number 1 Harrie Smolders (NED) who looked effortlessly quick on Zinius - the top ranked horse in the world.

Scott Brash (GBR) brought out the 9 year old gelding Hello Jefferson, riding a beautiful round with the young horse to deliver a clear. He would be joined by Lorenzo de Luca (ITA) with De Flipper, Simon Delestre (FRA) with Chesall Zimequest, Alberto Zorzi (ITA) with Ulane de Coquerie, Darragh Kenny (IRL) with Babalou 41, Jérôme Guery (BEL) with Celvin. Another showcase of top riding saw Marlon Zanotelli (BRA) manage Icarus to make it a 10 rider showdown, the quick Brazilian last to go in the high-powered jump-off.

First rider in, Olivier Philippaerts (BEL) had the tough job of riding the path-finding course, however kept his cool to power around the track with Extra to lay down the gauntlet at 36.04s.

Hot on his heels, Anna Kellnerova (CZE) and Silverstone G looked to be in perfect harmony, the big striding horse flying around the course to knock milliseconds off 35.53s. But she had plenty of challengers still to come, and quickly Harrie Smolders (NED) showed just why he and Zinius are on top of the world, knocking a further second off to set the bar at 34.29s.

Darragh Kenny (IRL) looked dangerous to take over the lead, but a pole down ruled him out of contention. A steady double clear for Scott Brash (GBR) with Hello Jefferson also put them out of the running, the British rider resisting temptation to go for the win, looking at the bigger picture and with a clear long-term plan for his young horse.

The temperature rose again as Lorenzo de Luca (ITA) knocked Smolders off the top spot, but the lead looked set to change hands again after Simon Delestre (FRA), bolstered from an earlier win this weekend and being on home turf, galloped with Chesall Zimequest to the last line. The Frenchman set a faster time at 33.69s, however was eliminated under FEI Jumping rule Article 241.3.3 after a mark was found on his horse in the post competition check.

Final rider to go Marlon Zanotelli (BRA) took an inspired turn back to the GC plank, but the pressure from de Luca’s time was too much - forcing an error as a pole fell. So the speedy Lorenzo de Luca (ITA) would claim the Julius Bär Prix with De Flipper, the pair taking the spotlight as they were presented the trophy from Rémy Bersier.

Tomorrow will see the GCL St Tropez final which kicks off at 14:00 local time, and the Longines Global Champions Tour Grand Prix of Saint Tropez, Ramatuelle which takes place at 17:30. All the action will be streamed live via GC TV, with expert commentary, analysis and exclusive guest interviews.