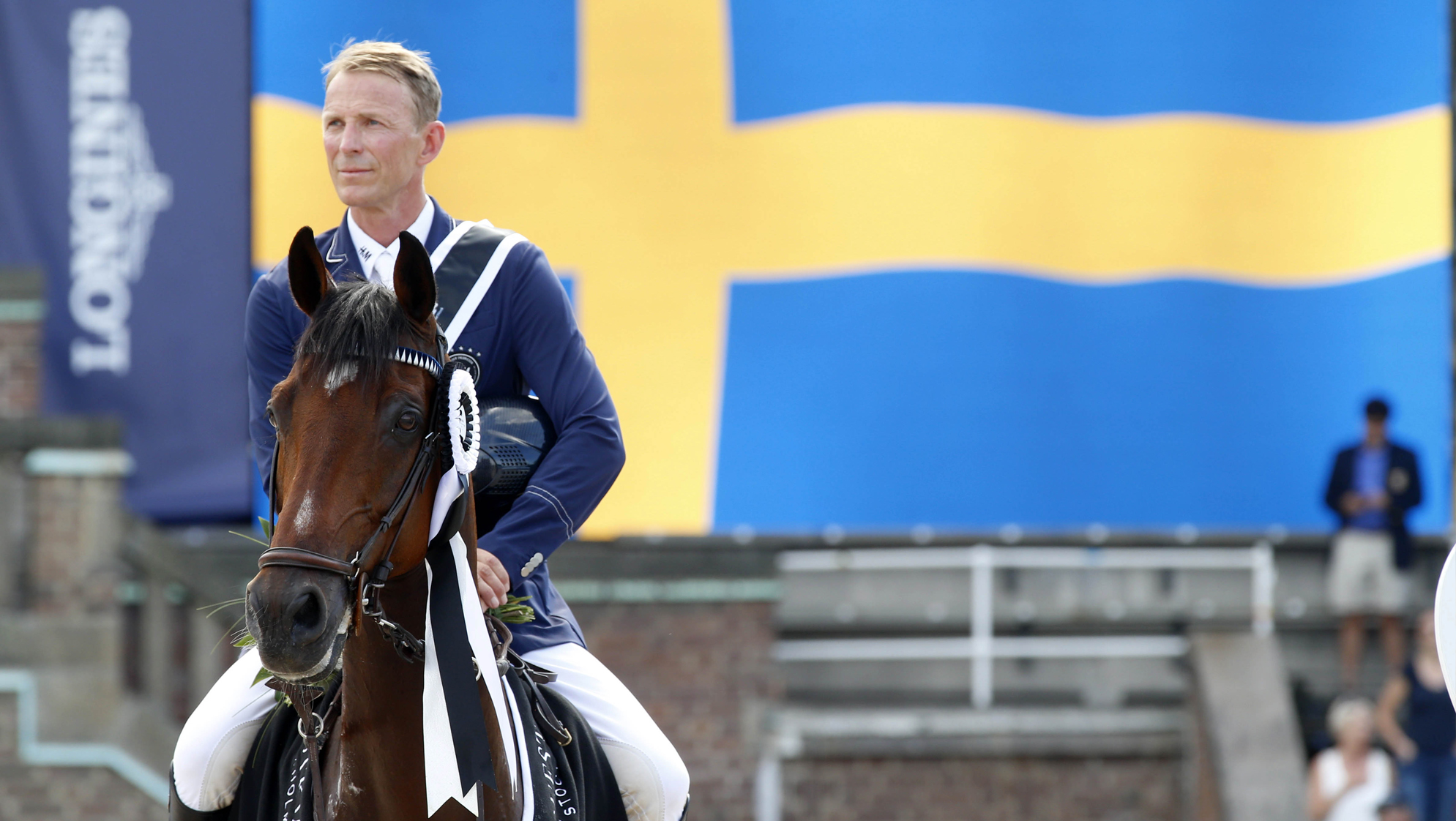 It was a fairytale finish for Peder Fredricson (SWE) as he closed the Longines Global Champions Tour of Stockholm weekend with another win in Sweden in front of passionate crowds.

As the Swedish national anthem rang out, the crowd’s voices filled the stadium in harmony in a moving and emotional display, echoing the special moment yesterday which left all within the stadium with goosebumps.

An emotional Peder said: “It’s one of these weekends - the horses feel great, it's a great atmosphere. I’m really happy for my team, owners, and horses, and that Stockholm has been such an amazing event for the first time. I’m really proud and happy to be able to deliver these rounds on home ground."

Sweden’s capital city has been a bustling metropolis in the lead up to the Longines Global Champions Tour of Stockholm, with Barack Obama visiting to speak at the ‘Brilliant Minds’ conference, created by the Founder of Spotify.

The final course of the weekend was a flowing, turning challenge with a time allowed of 86s, set by Italian maestro Uliano Vezzani. A delicate vertical underlined with green bushes caught the eye of some horses, their focus momentarily lost and meaning poles would roll. A Longines oxer, and a Longines plank dropped a few hopes, and control, pace and precision were the top talking points today for those contesting the €145,700 prize purse.

Marlon Modolo Zanotelli (BRA) and Koddac van het Indihof flew around the course, but the Longines plank fell and ruled them out of a chance for glory today.

Harrie Smolders (NED) and his fiery Cas attacked the course with bravery and determination, the keen 12 year old bay gelding powering to the fences and flying to the first clear of the class. He was soon followed by Olympic athlete Ben Maher (GBR) with top stallion Tic Tac, the combination masterfully finding their perfect stride to every fence to finish clear - there would be a jump-off.

Three would be the magic number as next to go Mark McAuley (IRL) and Valentino Tuiliere also put a clear on the board, with the line up for the final showdown hotting up nicely.

But there was disappointment for many top combinations, including Pius Schwizer (SUI) - who won the previous speed class today - the Swiss rider retiring with Cortney Cox after it all began to unravel this afternoon. Lorenzo de Luca (ITA) and the powerful Scuderia 1918 Halifax van het Kluizebos looked to be on phenomenal form until they came unstuck at the Longines combination, the back rail of the Longines oxer falling before they took out the plank too. Scott Brash (GBR) and Hello M’Lady had looked on form throughout the weekend, but an unlucky fault down the longside of the hospitality tent meant they too would miss out on a chance of glory today.

Kim Emmen (NED) managed the strong looking Delvaux carefully around the course, keeping steady to the last to slingshot themselves into the jump-off. They would be joined by Michael Whitaker (GBR) with Valmy de la Lande, Edwina Tops-Alexander (AUS) with Veronese Teamjoy, and Frank Schuttert (NED) with Queensland E.

Home hero Henrik von Eckermann (SWE) and Que Bueno de Hus Z kept the dream of a final Swedish win alive as they powered there way into the jump-off, much to the delight of the watching spectators.

Fresh from his LGCT Grand Prix of Stockholm win yesterday Peder Fredricson (SWE) received a huge round of applause as he entered with H&M Christian K. As the final duo to go, silence fell across the arena as they took their chance to sweep the final win of the weekend. They had a few scary moments, but they delivered, Peder in prime position as last to go in the nine rider jump-off.

First to return to the ring, Harrie Smolders (NED) knew he had to throw down the gauntlet to the rest of the field and worked hard to put the pressure on the rest of the riders. With his famously smooth style, he piloted Cas around the fast course, opting to go wide around the Longines fence to take a better approach to the fourth fence. But the first part of the double came down after a long curving gallop. They finished on 48.01s, with a benchmark on time for the rest to follow.

Ben Maher (GBR) and Tic Tac asked course designer Uliano Vezzani one final question before they set off on a gallop to the first. They too jinked to the outside of the Longines fence, keeping their flow and were clear on 46.56s, a delighted Ben patting Tic Tac in delight as they trotted out of the arena.

Mark McAuley (IRL) and Valentino Tuiliere looked faster from the off, but lost time after an initially strong start. But the penultimate fence, the Longines vertical set on a roll back, put paid to their chance of a win today.

Young Dutch rider Kim Emmen (NED) and Delvaux took a gutsy five strides to the second fence, but the second part of the combination came down after they lost a little control after their forward approach.

Michael Whitaker (GBR) was a medallist at Stockholm’s Olympic Stadium in 1990 at the inaugural World Equestrian Games. Today he was looking for another podium position with Valmy de la Lande, and managed the keen grey horse beautifully to deliver another strong clear - just a fraction behind the time in 46.70s.

The crowd cheered as Henrik von Eckermann (SWE) and Que Bueno de Hus Z entered the arena. They threw caution to the wind, galloping to the fences, but it came undone the double, the horse paddling at the second oxer and dipping a toe in the middle to finish their chance of a win today.

Edwina Tops-Alexander (AUS) and Veronese Teamjoy kept a steadier pace, Edwina opting for a controlled ride and tighter turns to make up time. The Australian rider picked every stride perfectly, finishing clear but just behind in 47.54s.

Frank Schuttert (NED) and Queensland E won this class at LGCT Madrid just a couple of weeks ago, and clearly wanted to add a Swedish trophy to their accolades. The pair lost grip in a tight turn to the roll back to the Longines vertical and had it down, with only one rider left to come.

The crowd once again cheered in appreciation as Peder Fredricson (SWE) and H&M Christian K entered the arena. The huge-striding horse powered around the course, the pair exactly level with Maher at the halfway stage. They sprinted down the final line and took an angle to the last, shaving milliseconds off the time to take the win in 46.11s.

So Peder would round out his weekend with the perfect finish, as the Tour waves goodbye to LGCT Stockholm and looks ahead to Cascais, Estoril, for round 9 of action on the Championship.