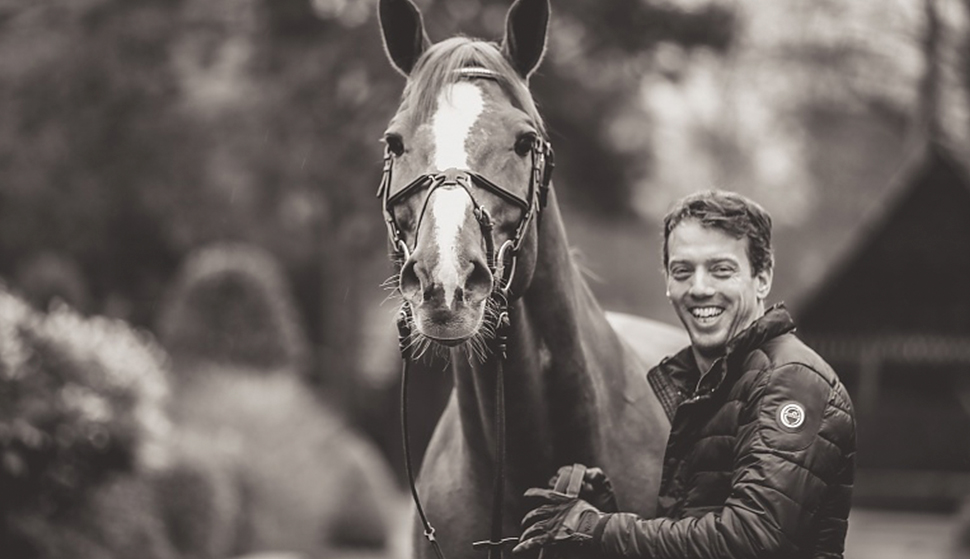 ~ balance: a situation in which different elements are equal or in the correct proportions. ~

Harrie Smolders: he's our 2017 Longines Global Champions Tour Champion as well as being an integral part of the GCL winning team, the Diamonds, and he's had quite a year. In early January, we spent time 'at home' with Harrie for an exclusive behind-the-scenes look into the world of 'The Flying Dutchman' and to reflect on a rollercoaster year with top stallions Emerald and Don VHP Z. Read Harrie's fascinating insight into his high-stakes season, his thoughts on the future, the key to horsemanship and why, in his opinion, success all comes down to balance...

Driving up to the stables, based in Belgian countryside, the overriding feeling is that of 'family'. Harrie has been a rider for the Verlooy's since 2002, and it's a warm, bustling yard that has been in the Verlooy family for over 40 years.

Part of that family are Axel, Nena and Jos Verlooy, with golden retrievers Bingo and Bongo, all of whom welcomed us into the warmth of the office which looks onto the indoor arena. Lined with trophies, medals, paintings and photos of Axel's highest performing horses, the office is the hub of the farm, with comfy leather sofas, an endless supply of coffee and an equal measure of smiles.

Walking through the stables, there is a strong sense of authenticity. A 'horses first' ethos is apparent, with every need catered for. “They're treated better than us!” laughs one of the students. Every morning, the horses are ridden out into the forest with miles of Belgian countryside to explore, perfect for strolls or fitness work depending on each individual horse's schedule. In the paddocks outside the famous mare Regina grazes happily.

First Harrie had to school Empress, the 7 year old daughter of Emerald who is starting her career in the show jumping scene. “She's talented, but she's sharp; it's about using that to our advantage,” Harrie explains as he throws an exercise sheet over her chestnut quarters, adjusting her bridle slightly before lightly leaping on.

Heading to the massive outdoor school it becomes clear Empress is indeed quite a handful, on her toes with fire, spirit and character. But Harrie soon settles her, quietly stretching the chestnut mare, respecting her energy but also gently reiterating his authority.

And that's something Harrie is most respected for, his horsemanship. There always seems to be a synergy between the horse and Harrie, and generally the public regard him as someone who is able to get the absolute best out of any horse. Balance is the key word, Harrie agrees: “I think at the end you need to have everything in the right balance. Horses should respect you but they should never be scared. They should be focused but not too fresh when they go in the ring, because they get too distracted – there's probably 100 of those things where you need to be exactly in the middle.

“And it's also for yourself – you have to be focused, but once you're in the ring you also need to adapt. For the rest you should not think about anything else. But it's not so easy, and you need to learn that.”

There has been plenty of media interest in Harrie's success stories, particularly last year which has undoubtably been the best so far of his career. And many times he's been asked, why? How? What does he attribute this success to?

Harrie gestures to the space around him: “Our management has been good for years, with Axel and Eurohorse we have been in the top 25 for over 10 years, but since three years we worked in co-operation with Copernicus and that really had influence on our focus for the sport. Now we can ride longer in the sport with horses – as a combination, i.e. the rider with the horse – and not that when the horse does well he is sold, but to also enjoy the success.”

We head back to the solarium, where Alex Tyler-Morris, Harrie's long-time groom and a familiar face on the LGCT and GCL circuit is prepping Emerald for his photoshoot. The head-turning bright chestnut stallion has caused quite a stir on the show jumping scene, creating a fanbase around the world not only for his exceptional results but also his charming looks and presence.

Harrie applies hoof oil to the stallion's feet. Emerald seems extremely laid back, enjoying the fuss, almost docile dare we say. The topic of horsemanship comes up again. “I knew Emerald when he was six years old. Don I've had for three years now. If you want to make a difference at the top level of the sport you must have a very good partnership; you must know all the ins and outs, you must know in every turn what you can expect and what he can expect from you. Otherwise you cannot make a difference in the top level of our sport.”

There's a trust that's built, and it's clear Harrie believes it is understanding horses as individuals and listening to them makes the difference.“I'm not afraid to make mistakes. I try different things and I feel if I improve something, then I take that direction. In the end I create a kind of concept for each horse – I know exactly what he likes, how many jumps we need in the paddock, how long I have to ride him in the morning, which bit I ride him in on the first day, and then which bit I ride with on the second day. It's like a programme on every show with every horse and I know he's at his best in each class.”

We took Emerald outside, where he instantly switched on his model pose, with every camera click growing in height, stature and elegance. On his bridle, a tiny green emerald good luck charm, which catches the light as the chestnut stallion turned his head proudly.

We wondered if having a plan like that went deeper, and if it was a reflection to help Harrie mentally, as a sportsman, psychologically. And how it relates to winning.

He smiles; “It helps to achieve what you want to achieve. You also look to every horse specifically where his strengths are, which classes he can be at his best and that's where you'll plan to compete. But to have that programme, or that concept, it's the most difficult part to create. Most people can see a little bit from the outside – he's fast or not fast, he's scopey and then in which class he might have the best opportunity. But to create a programme for each horse needs horsemanship and feeling. A good analogy is like a Formula 1 driver who will tell his team that his steering needs a small adjustment, the left front tyre needs more pressure etc. and it's a similar concept to how we work – all the details are important.”

It's like a jigsaw puzzle, and a very logical way of approaching something that is quite emotional. It's sport, after all, with double the complexity as both horses and humans have emotions. Harrie gives another wry smile, “It's not that difficult to understand, but to have everything in the right place is difficult.”

And it is. Particularly when the pressure on your shoulders is enormous. But Harrie brings it back to the fundamentals - the partnership with your horse is key; “I think one of the biggest strengths of Don is that every day he's exactly the same and that's why you can manage him so well. Every day you know what to expect, and that's why he is, for me, one of the best. In the GCL in Doha, we were in 11th spot after the first day and I had to go clear to be in the top eight and win the Championship. After 60 rounds in the GCL season it came down to the very, very last round. Unbelievable. I had to go clear in the final round, and that was the difference to winning the title. It was one rail. So all the pressure was on Don again - it was the most valuable round he ever did!”

And not only did Harrie take the GCL title with the Diamonds, he made history by becoming the first rider to wrap up the LGCT Champion of Champions win ahead of the final in Doha. “In LGCT, we never expected that I could win the title in Rome. All the others who were just behind me also brought their best horses, so I never considered that we could finish it there. Theoretically we could, but I never expected it.

“For LGCT I must also say that Emerald made the title. All the spotlight was on Don, as at every moment he finished the job. But when I was preparing Don for the Europeans, Emerald was 4th in London, he won in Chantilly and he was 6th in Valkenswaard in the LGCT. He made the title in that period.

“In the end with LGCT, eight results are counting - Emerald and Don had four results each. Don came through in Rome, Shanghai, Hamburg and Paris.”

Stay tuned for Part 2 of our "At Home with Harrie" feature...