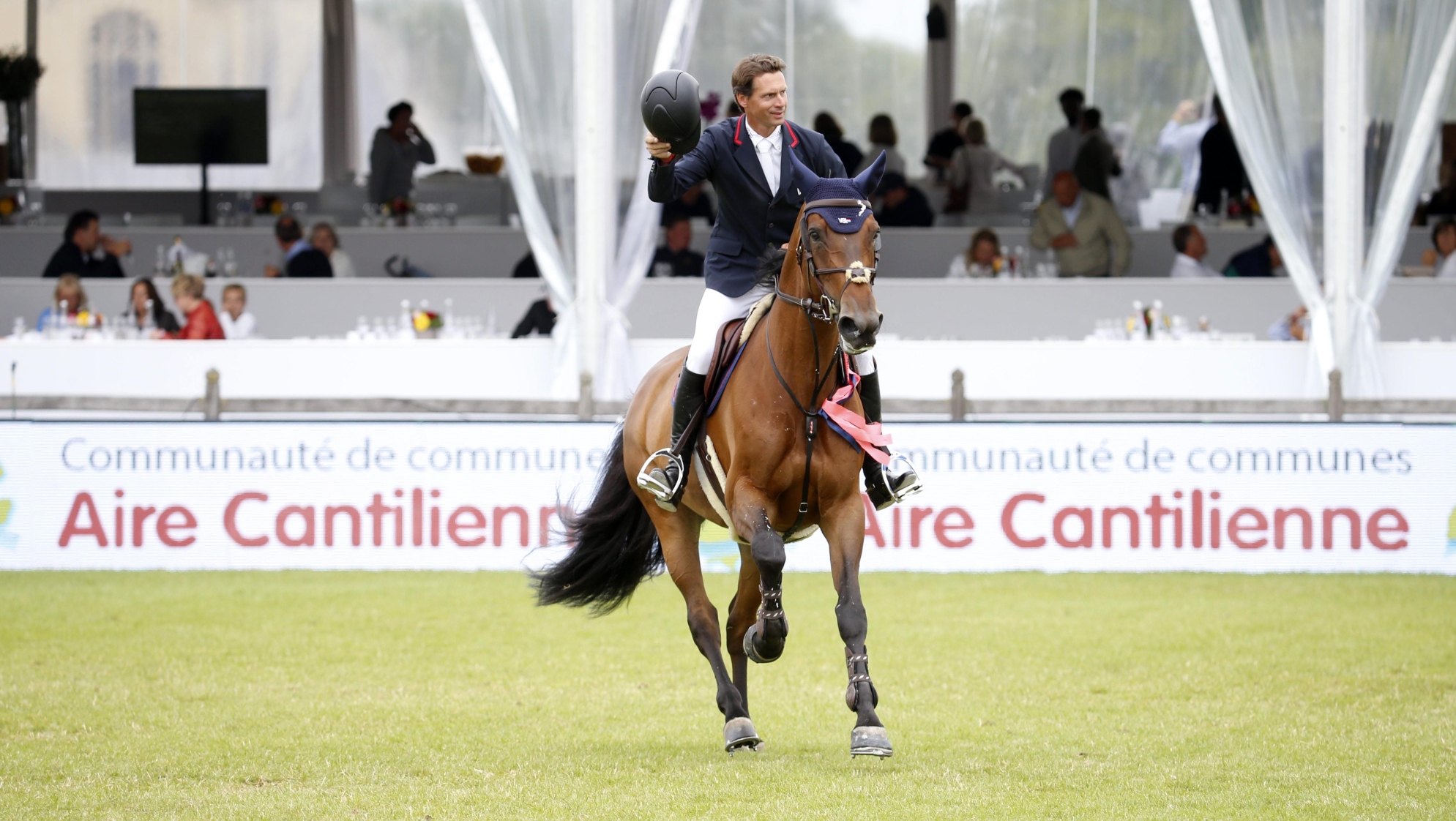 A pleased Van Asten said: “So far this weekend I have not been very lucky so it is nice to end on a win. To be honest, I didn’t see many of the other rounds, I made my own plan and wanted to do my own round. I took a risk to the last fence and my mare did very well - we did just enough today."

Twenty-four combinations came forward to tackle the 1.45m speed class built by Uliano Vezzani. It was a tough but fair course with an option of jumping an open water or tall upright.

Pathfinder Michael Whitaker (GBR) had an early fence down causing him to slow up and also pick up two-time faults on his bay El Wee Widge. Surprisingly speed class champion - Pius Swchizer (SUI) knocked the first part of the double on Balou Rubin R putting them straight out of contention for another win. The pair will be back later this afternoon in the jump-off class for a second shot.

The first clear round was produced by Marco Kutscher (GER) on Boeckmanns Lord Pezi Junior. They were aiming for a steady smooth round and finished as the slowest on 0 faults. Roger-Yves Bost (FRA) gave it everything he had, he was over 10 seconds quicker than the leading time but the second to last fence fell costing him the top spot on his 12-year-old mare Castleforbes Talitha.

The first and third fence fell for Jane Richard-Phillips (SUI) and her beautiful bay Izmir van de Baeyenne causing her to retire early on as she knew she wasn't going to pick up a share of the prize money today. Naturally fast Scott Brash (GBR) and Hello Senator didn’t push hard but easily went into the lead in a time of 66.13 seconds leaving the rest of the field to chase down his time.

Henrik von Eckermann (SWE) challenged Brash’s time by taking all the inside lines. He finished just over two-tenths of a second slower to end up in fourth place on Que Bueno de Hus Z. Luis Sabino Goncalves produced the fourth clear round of the day on Dominka van de Lucashoeve. The combination rode a smooth and balanced round but couldn’t match the pace and ended up just inside of the top ten.

Fresh from her superb performance in the LGCT Grand Prix of Chantilly yesterday Penelope Leprevost (FRA) and Varennes du Breuil pulled out yet another clear round but wouldn’t be finishing on the podium today as they crossed the line in 70.51 seconds.

Kim Emmen (NED) and Flock were the only combination to have a foot in the water after chipping in an extra stride but the under 25 rider will be back fighting in the jump-off class later. The speedy Spanish rider Eduardo Alvarez Aznar (SPA) took a flyer to the last fence on his black gelding F, they were within touching distance of taking over the lead but had to settle for third place.

Flying Frenchman Julien Epaillard (FRA) was hoping to make it a home win again. Unfortunately, he had an early fault on Indigo so decided to slow up and save his energy. Margie Goldstein-Engle looked on track to storm into the lead after going flat out to the water jump, she crossed through the timers in 66.46 seconds just half a second slower than first place.

But it was last to go Leopold Van Asten who cruised into the lead on his 10-year-old mare. Both horse and rider looked on flying form and they squeezed into the lead by less than two-tenths of a second.

The next and final CSI5* class of LGCT Chantilly will commence at 14.45 local time so make sure to tune into GC TV on our website to watch all the action LIVE and for free.