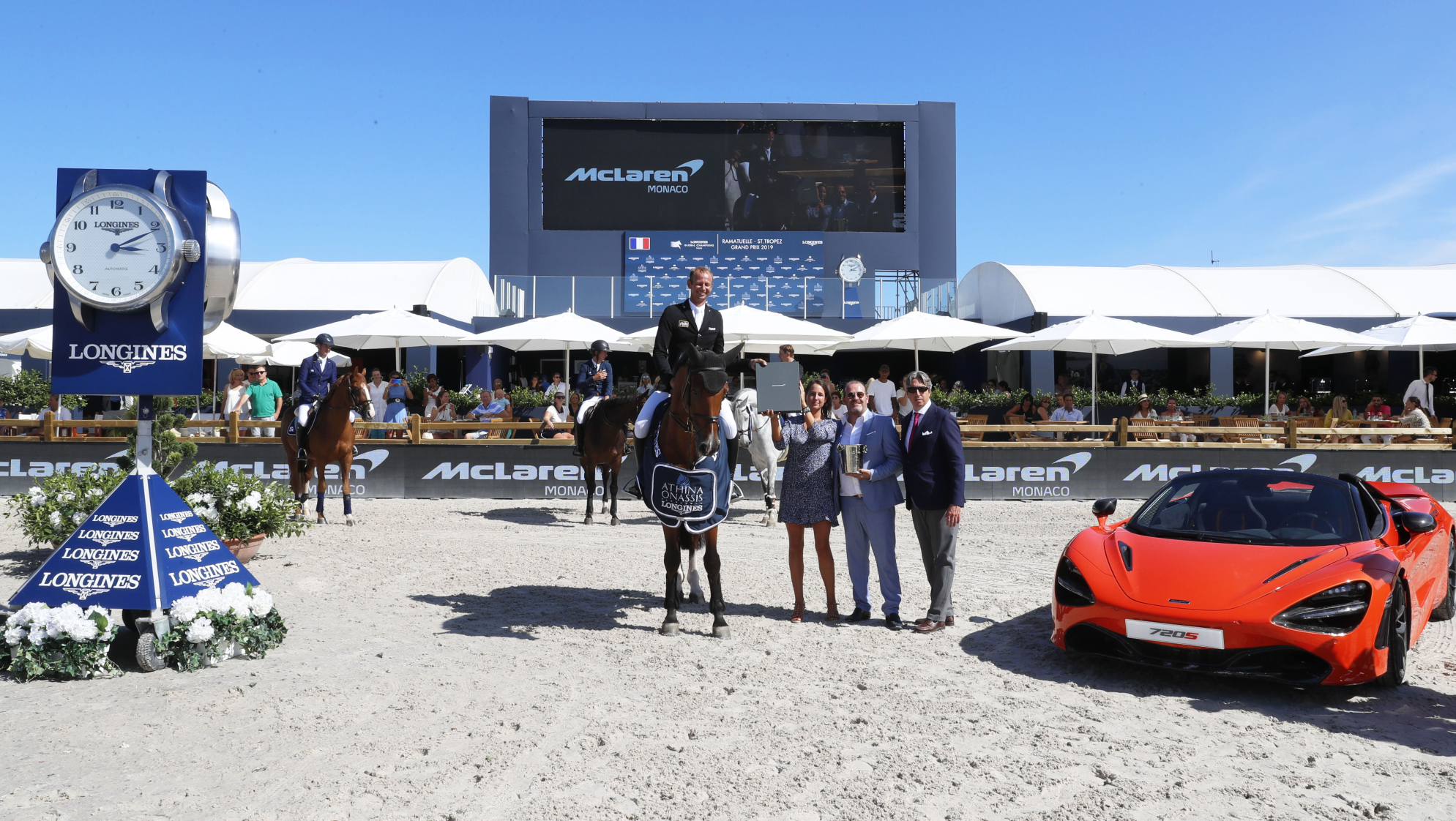 Marco Kutscher (GER) opened the second day of the Longines Global Champions Tour of Ramatuelle, St Tropez, with a spectacular win in the McLaren Monaco Prix on his stallion Charco. Taking second place by just over two-tenths of a second was Daniel Deusser (GER) on Kiana van het Herdershof and the last spot on the podium was picked up by Irish talent Bertram Allen (IRL) and Vox Dei.

A beaming Marco Kutscher (GER) said: "I am delighted with how my horse jumped and very pleased that no one could catch my time. Next, we head to LGCT New York in two weeks time where we also hope for a good show."

Uliano Vezzani set a fast and flowing 1.45m speed class with a tough last line that caught out a fair few of the top international combinations today. There were only 9 clear rounds as the best of the best raced against the time in the hope of landing at the top of the leaderboad.

First to go Emily Moffitt (GBR) rode a great round to leave all the fences up but was caught out by the tight time allowed on her top gelding Winning Good. She crossed the line in 78.68 seconds picking up one time fault and leaving room for the rest of the field.

The first clear round was produced by speed demon Bertram Allen (IRL) who took all the strides out where possible to stop the clock in 60.26 seconds on his 10 year old Vox Dei. However, his time at the top didn't last long as Marco Kutscher (GER) flew into the lead on his bay stallion Charco. The pair took the tightest turn back to the final line of the whole class and set an impressive time to beat of 59.96 seconds.

It wasn't meant to be today for home rider Sadri Fegaier (FRA) as the first two fences fell when Ivoor van T Paradijs knocked them with his front foot. They finished with 12 faults putting them towards the latter part of the leaderboard. Ranking leader Ben Maher (GBR) picked up a very unlucky early fence on Carlson 86. His plan quickly changed after the fence fell and he slowed up to finish with 5 faults in total.

The pace was challenged when Daniel Deusser (GER) got faster and faster as he steered his 9 year old Kiana van het Herdershof round in 60.21 seconds. They couldn't have cut the corners any tighter but had to settle for second place overall. There was drama when Mathilda Karlsson (SRI) turned a little too tight into the last line and CSF Vendi Cruz put the breaks on causing them to pick up four faults.

It then looked like Olivier Perreau (FRA) was set to take over as the new leader until the second part of the double fell costing him a spot in the top 10 with GL Events Dolce Deceuninck. Luciana Diniz (POR) had the first fence down on Lennox putting this normally fast combination straight out of contention for the win in this Longines World Ranking class.

Yesterday's winner of the first class of LGCT Ramatuelle, St Tropez, Mathieu Billot came forward with his huge striding 13-year-old Quel Filou 13. They couldn't quite match the pace and finished 8th with a very smooth round.

So it was a win for the only combination to leave all the fences up in sub 60 seconds Marco Kutscher and Charco.

The final class of the day, the Prix PremiuMares will take place at 16:30 local time - tune in via GC TV to watch the action with expert commentary.​