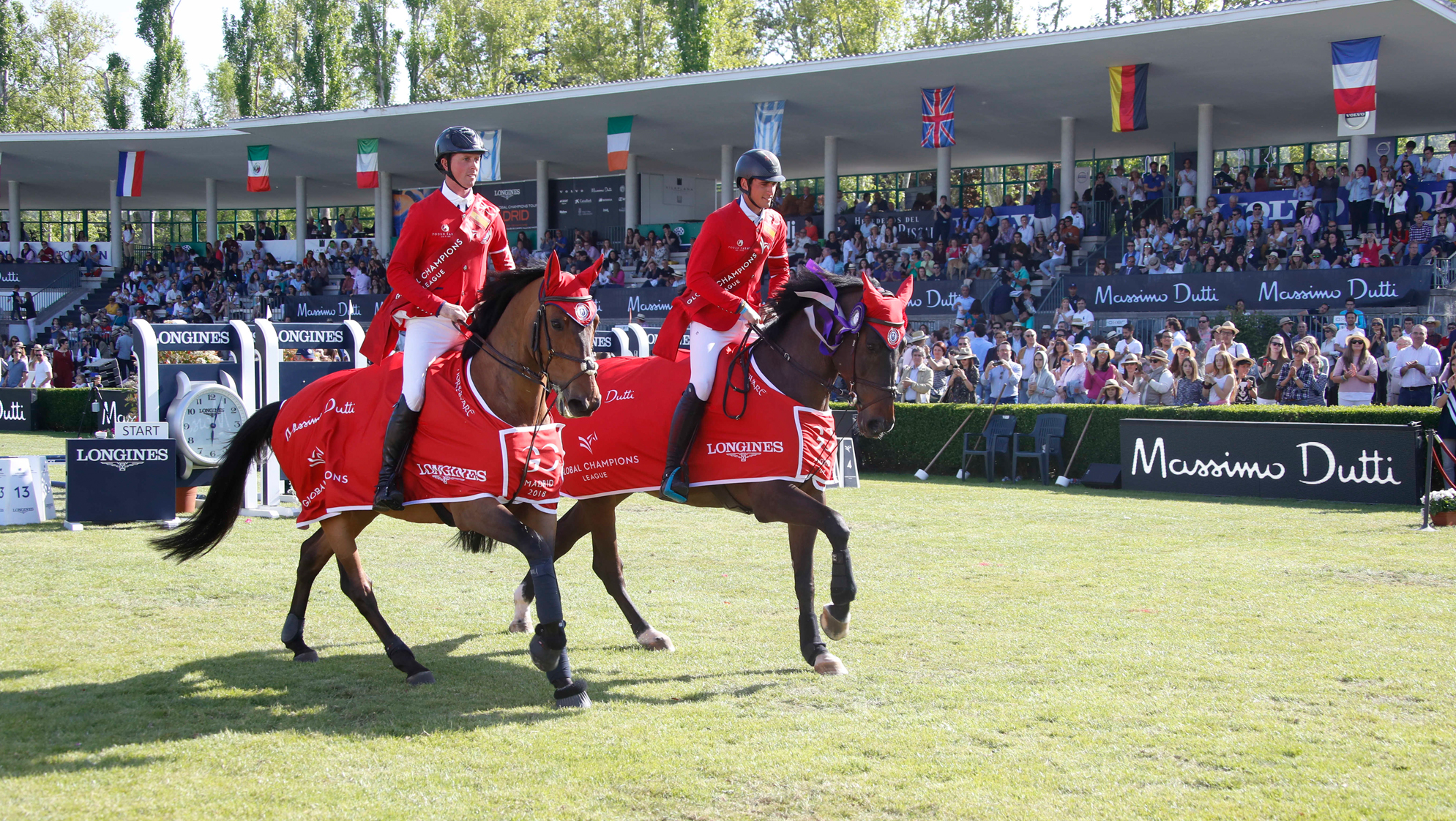 The scarlet-suited London Knights brought home a second win of the season, after a spectacular Spanish showdown saw thrills, spills and top sporting action. Ben Maher and Nicola Philippaerts of the Knights withstood enormous pressure to ride the only double clear of the day, stealing the win from the Shanghai Swans and securing their place at the top of the overall rankings.

With a second consecutive win in the bag, the Knights have furthered their lead in the Championship race with 92 points overall - their sights firmly fixed on the GC Prague Play Offs at the end of the year, and a place in the GCL Super Cup. Valkenswaard United remain second in the overall rankings, currently on 76 points, and Berlin Eagles lie in third with a points tally of 65.

The Knights played a strategic game in Madrid, fielding U25 star Emily Moffitt on the first round of competition, and bringing in Nicola Philippaerts for the second round. Second went to Laura Kraut and Abdel Said of the Rome Gladiators, and third to Daniel Deusser and Pedro Veniss of the Shanghai Swans, the duo toppling from pole position in an edge-of-the-seat final round.

With blue skies painting the sky above the Club de Campo Madrid, Santiago Varela Ullastres’ course was another mix of galloping distances and delicate poles which fell at the lightest of touches when a hoof kissed the rail. Built specifically around the undulating field, which to the naked eye looked flat, but featured gentle slopes, the flowing track was a true test for the world’s best, and the perfect prelude to the Longines Global Champions Tour Grand Prix of Madrid. The Longines triple combination came early on in the course, and a challenging Massimo Dutti double featured a wide oxer in, with a delicate vertical out, requiring power and precision in equal measure.

Riding in reverse order of Friday’s Round 1 results, the teams took centre stage, all hungry for valuable points in their quest for a place at the GC Play Offs hosted by Prague’s O2 Arena this December. Teams are able to collect points at every round, so every leg of the 16-event Championship will count as teams fight for one of the 16 qualification places available.

Home city team Madrid in Motion made a strategic rider change, with Marc Houtzager coming off the bench in place of Eric van der Vleuten. The decision paid off after Houtzager pulled off a clear with Sterrehof's Calimero, however teammate Maikel van der Vleuten picked up a further four faults with Arera C, putting the team on a total of 16 faults. After his round, Houtzager said: “The course is quite difficult with many faults. It’s a shame for my team that we had one fault, but we’re going up the [rankings], so were hoping for a top ten finish.”

New York Empire also made a strategic team change, this time within their horse line up as Scott Brash brought out superstar mare Ursula, replacing his younger talent Hello Jefferson. The British anchor pulled off a brilliant clear, pulling off his plan perfectly to help keep the team on 8 fault. He was followed up by teammate Cian O’Connor, who kept the same horse Clenur for this round - a horse that won the team competition under Marco Kutscher this time last year. But it wasn’t to be, as the back rail of the oxer situated uphill tumbled, and another pole and time fault added a further 9 faults to the team score.

The crowds groaned as Edwina Tops-Alexander and California clipped the final fence for the St Tropez Pirates. Their hopes were further dashed as Pieter Devos took out the first part of the Massimo Dutti oxer, putting the team on an overall score of 16 and out of a podium position.

Valkenswaard United brought Italian superstar Alberto Zorzi off the bench for this round, with the pressure firmly on his shoulders after Marcus Ehning and Pret a Tout clipped the middle element of the triple combination. Keeping cool, calm and collect, Zorzi rode Contanga beautifully, going for a slow clear, but on the run for home just caught the GC vertical and then there was further heartbreak as the final fence fell.

There was disappointment for Berlin Eagles’ U25 rider Ben Asselin after picking up five faults, but Christian Kukuk pulled out all the stops to deliver a clear with Limoncello, the huge striding horse powering around the arena - clearly suited to this venue.

Overall ranking leaders London Knights played star striker Nicola Philippaerts up front, with the young Belgian talent delivering a clear for the team with H&M Harley vd Bisschop. The team kept anchor, British star Ben Maher and a new star in his string Explosion W, with the tactics paying off. The first double clear of the day was in the bag, with the team staying on a team score of four, the crowd roaring their approval for the scarlet-suited team.

Rome Gladiators' Abdel Saïd brought out relatively young Jumpy van der Hermitage, the 9 year old taking on the course beautifully. 1 time fault would mean they drop just behind the Knights, with teammate Laura Kraut remaining solid with another clear on Confu to keep the team on 5 faults overall, and just two hundredths of a second within the time allowed.

Montreal Diamonds’ U25 rider Jos Verlooy looked to going for a steady clear, but the tension was too much and the pair collected 8 faults to drop them down the order. Another 8 faults from Eric Lamaze plummeted them down the order and out of contention.

So the win would go to a delighted London Knights team, with Maher, Philippaerts and U25 rider Emily Moffitt, who had put in a strong performance for the team yesterday, who posed for the winner’s photo. The GCL team series now looks to Hamburg, Germany, where tens of thousands of fans will witness the world’s best take centre stage for the fifth leg of the Championship race.

Jan Tops, Co-Founder GCL: "For this afternoon’s League we could see there were 11 team contenders which was fantastic so everything was very close which every sport likes

"All the legs of the League this year have been won with a team with someone who is 25 or under which is fantastic for top sport and young people coming up, because at the end of the day young people are the future in our sport. Today with the sport it is something you dream of, it can’t be better."

Pedro Veniss, Shanghai Swans - 3rd Place: "I am very happy. I really like the Team competition. I think we did a good job. We were a bit unlucky but the horses jumped very good."

Laura Kraut, Rome Gladiators - 2nd Place: "Abdel (Said) did a fantastic job to come in with one time fault. It made it nice for me. I figured I could jump clear and still have one or two time penalties and still be on the podium. He took the pressure off me. We have been struggling along but now we have got it going."

Nicola Philippaerts, London Knights - 1st Place: "We jumped well and will hopefully for the rest of the season. If you see the Global Tour the shows are amazing. Madrid is a fantastic show, so many people, it is really top sport here.  As it is a team competition it is different snd it is important to give your best in the ring."

Ben Maher, London Knights - 1st Place: "It is a great start but it is still early days. We have a really good team spirit. We are always talking on the phone before the show, really working together, having a long debate. We are very happy with the position right now but there is a long way to go. We need good horses for the team. Shanghai was my first show on him (Explosion) and it went very well and has continued. It seems nothing fazes him but he will have a well-earned rest now.

He is just a horse that just drops in and looks for the next jump and it is something I have not experienced many times."