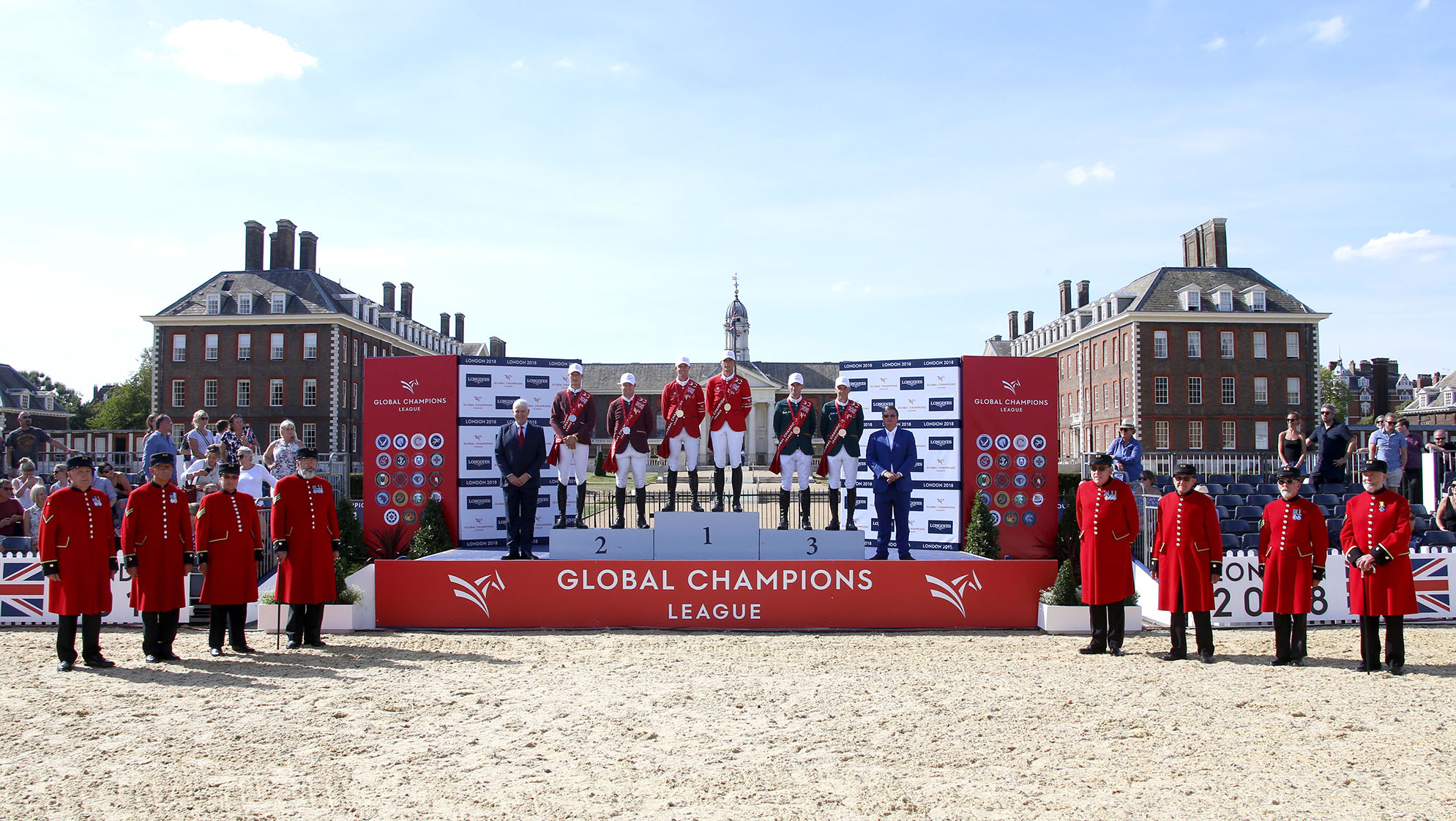 Escorted by the Chelsea Pensioners in their traditional Scarlets, the red jackets of the Knights perfectly complimented the veterans’ uniforms as they proudly took the top step of the podium today - their fourth win of the season and the only team to win at their home event. Today’s result means the team have extended their overall ranking lead, where they now sit on 299 points, pulling away from closest rivals Valkenswaard United on 261. Miami Celtics have moved up to third, with 206 points in their bag as they look to qualify in the top four for the GCL Super Cup at the GC Prague Playoffs.

The 13th leg of the Championship saw top sport come down to the wire in Great Britain's capital city. Just a stone’s throw from the River Thames and under bright blue skies, fans packed into the covered grandstands, waving British flags patriotically as well as London Knights emblems with local spectators rooting for their home team.

Uliano Vezzani produced a tricky and technical course, a real test for the teams as they battled to keep a clear combined score. The Longines double set across the arena and a treble set down the long side caused a few problems, as did the delicate Sapinda vertical. A huge London Underground triple bar looked imposing but caused no serious problems, but it was the final line that caught out many - a gappy flower filled oxer away from the in-gate before a water tray lined vertical to finish.

Doha Fursan Qatar were the first to pull a clear out of the hat today, however, Bassem Hassan Mohammed picked up just one time fault alongside Michael Whitaker to keep the team on a score of 14. Montreal Diamonds started their comeback campaign after Eric Lamaze and Chacco Kid delivered a spell-binding clear, before he was swiftly backed up by anchor Harrie Smolders with Don VHP Z N.O.P to keep the team on their score of eight.

Abdel Saïd of Rome Gladiators delivered an assured clear with Jumpy van de Hermitage, before Lorenzo de Luca took up the reins with Halifax van het Kluizebos to keep the team on a score of 5, with the rest of the field yet to come.

There was further drama for Valkenswaard United, the blue and orange team looking for a clear score today to keep them within touching distance of their big rivals the Knights. But a pole each for Maurice Tebbel with Chaccos’ Son and Alberto Zorzi with Contanga 3 meant the team would drop down the order and way out of contention.

Shanghai Swans quickly soared up the leaderboard, with Shane Sweetnam and Daniel Deusser pulling out all the stops to keep their team on a score of four faults.

Athina Onassis delivered a smooth round with MHS Going Global for the St Tropez Pirates, picking up just one time fault for the team to add to their score of 2. Laura Klaphake was brought off the bench for this round of the competition, riding Catch Me If You Can. An unlucky four faults for the pair meant they would put the team on a total of 7, dropping them off the podium and out of contention.

Berlin Eagles Ludger Beerbaum and Christian Kukuk couldn’t match their zero score, tumbling down the scoresheet and leaving just three teams in with a chance of a completely clean score.

Miami Celtics fielded Shane Breen up front with Ipswich van de Wolfsakker. Shane had a wiggle to the planks which meant he had to push on the last few strides but then jumped very smoothly. Unfortunately he rolled the front rail of the third part of the combination putting the pressure on teammate Denis Lynch to go clear with RMF Echo. The chestnut stallion was giving the fences miles of room and jumped a superb clear but was unfortunately was not fast enough to get ahead of the other team on four faults.

Daniel Coyle took up the mantle for the Cannes Stars, but fell short at the combination, coming down on the back rail of the second element. He then sped up, wary about the time which cost him the last fence, finishing on a total of eight faults. Teammate Jane Richard Philips also had the last element of the combination down but this time it was the front rail that fell, putting the Stars even further down the results. An unexpected refusal sealed the deal, and meant only the Knights had a chance of keeping a zero score.

Spectators cheered their home city team the London Knights, as they entered the arena, proudly sporting their scarlet jackets but focused on keeping the team on a score of zero. Watched on by U25 rider Emily Moffitt, first to go Nicola Philippaerts piloted top stallion Chilli Willi around the arena, the impressive horse eating up the ground with his huge stride and clearing the fences effortless to keep his team in the best possible position.

All eyes turned to home hero Ben Maher, the rider swapping yesterday’s mount Winning Good with the 9 year old chestnut Explosion W. Fans held their breath as the British rider jumped a foot perfect clear, delivering another show stopping round to help the Knights collect their 4th victory of the season.

Jan Tops Co-Founder GCL: "I think the London Knights are exceptionally strong at the moment, even when they have the extra pressure of being at home. All of the riders are at the top of their level along with their horses. When I look at the list I don’t go to the top, I go to the bottom that is where the excitement is between 12 and 19 and I look to see who is going to qualify for Prague. The Knights are pretty safe but the others are not so much. Everybody still has a chance to win the three million [euros] as people who are seventh right now could still win. I am very proud to be in this spot [Chelsea] - it is very unique and one of our crown jewels on the circuit. To be in London is already amazing but to be in this spot is perfect. We have a long-term relationship now with Chelsea. People love to be here and the atmosphere of this great horse nation is makes us very happy to be here."

Shane Breen, Miami Celtics: "We are delighted with the result today, it's tight between a few of us. Our aim is to stay in the top four. I think the London Knights are in a different league They had a fantastic win again today well done to the boys. Now we keep battling and move forward to the play offs. Jessica had a fantastic clear yesterday and we decided to put Denis in today which was a very good idea, he was superb. The team strategy is to always jump clear rounds."

Shane Sweetnam, Shanghai Swans: "I suppose I have a lot of experience from competing for Ireland, I am lucky to have three top horses that I can rotate with and they have all played their part. I always try to put my best forward for the team as everyone is making a big effort. We both knew what we needed to do today We just felt if we could both be clear and Daniel is very quick with that horse so makes the ground. Today it was definitely a tough track. There is good team spirit, we are both very professional and get on with the job."

Nicola Philippaerts, London Knights: "I think we did a great job again today, the horses jumped really good and the team is very consistent. We have quite a few combinations that are making a good shape and Ben always does the job, I can be happy with my horse as well - he is jumping great at the moment. My horse is a bit slower than Ben's horse, so most of the time I go first, then he can do his own round. It has been working well so far so hopefully we can do it for three more shows."

Ben Maher, London Knights: "The secret is having great riders and great horses. We have tried to be strategic and pick the right horses for the correct arenas. Nicola gives a lot of credit to me but really our whole team has been amazing. We have used every rider on our team many times and every week they are producing, so it makes it easier. The whole team has confidence in the plan and what we do.

"I don’t think you can ever expect anything or take anything for granted. This is the biggest tour in the world with the best horses and riders in the world. As Jan said there is some big prize money up for grabs. We have a 38 point lead but we are not going to hold back, we will still press for next week. We have a good plan, but we want to really try to get one more good result on the board next week. Then there is a bit of a break before Rome and Doha. So it will be nice to go into that three week break in the lead and give the horses a rest. Every result counts on this Tour. We try to keep three riders at every competition in case we have to make a substitute for any reason. You only need one mistake in the arena and don’t finish then you get zero points and you find the other teams can capture so we just keep our heads down and keep working away.

"I think there is always pressure and anyone who says they done feel the pressure I don’t believe. Nicola made my job a lot easier today, he produced a great clear. You don’t have much time to process how the competition is going with the back to back riders. I did a quick calculation in my head just before I went in and knew I had 75 seconds. I finished 74.5 seconds so timings was good with a little bit of luck. Just in case I had a mistake in the last line, which was a hard line to jump. Explosion is naturally a fast horse but nerves go away a little bit when you ride a horse like this."