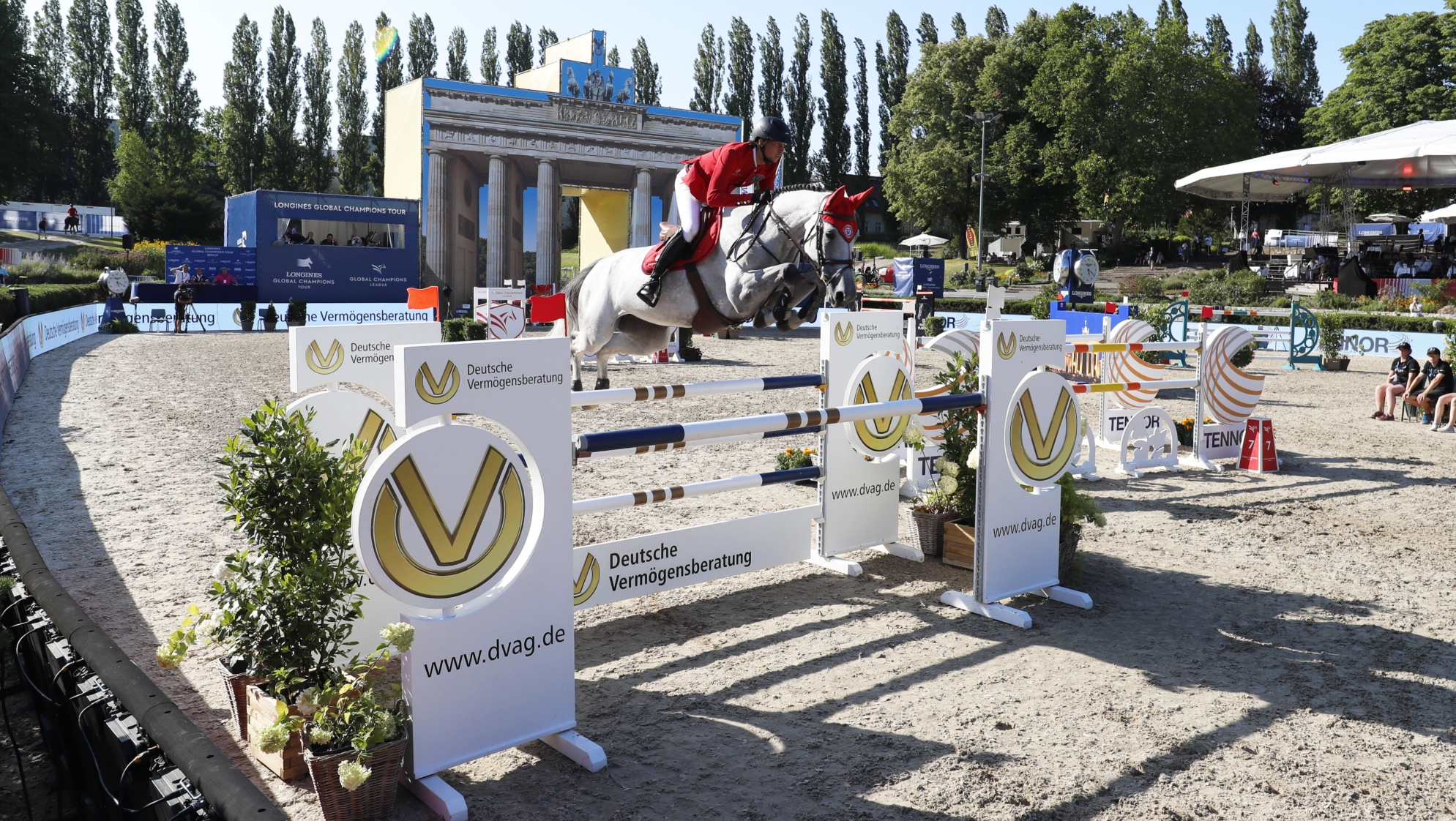 The Knights combo and the on form Eagles’ pairing of Ludger Beerbaum (GER) and Christian Kukuk (GER), winners of the previous leg, were the only two teams out of 16 on a completely clean sheet.

The leading team spoke of their determination to convert their advantage into victory tomorrow and revealed there will be intensive team talks on strategy to decide which riders will compete in GCL Berlin final. Martin Fuchs said: “We are just in the lead only half way through so we need two more clear rounds tomorrow. It is always our goal to be winning and to close the gap to the leaders.  We have three good riders and good horses here, so we will decide soon with our team manager Ben Maher.”

The Knights are third in the tight 2019 GCL championship race on 209 points behind Shanghai Swans on 218 points and the leaders Miami Celtics only three points ahead on 221. Nicola Philippaerts said: “Tomorrow we will speak as a team and make the best plan, but we haven't decided who will ride tomorrow yet.”

Hamburg Giants were the fastest team on four faults ahead of Prague Lions, St Tropez Pirates, New York Empire and the series leaders Miami Celtics all on four faults going into tomorrow's final. But there were upsets for strong contenders Shanghai Swans, Valkenswaard United, Madrid In Motion and Paris Panthers.

The Sommergarten arena in the German capital was packed for the GCL team competition in bright sunshine and riders praised the air conditioned stables and warm up arena keeping the horses cool through the event. Daniel Deusser (GER) said: “It is the best conditions with the air conditioning in the stables and the warm up arena so you are only in the arena for a few minutes. It is the best possible conditions for the horses.”

Here is how the action unfolded around Frank Rothenberger’s course in the compact sand arena overlooked by the city’s landmark Funkturm tower. With spectators filling the grandstands and the grass banks around the arena it was to be a dramatic afternoon of top-level team show jumping.

Daniel Bluman (ISR) was first in working hard as the pathfinder and appeared to be heading for a clear with the crowds already applauding. But then Bluman and Colestina H had a pole down at the first part of the double combination for a deflating 4 faults.

Georgina Bloomberg (USA) and Chameur 137 pulled off a brave inside turn at the GC Champions vertical. The smart riding helped them smoothly through the challenging triple combination and they finished with a strong clear leaving the team on only 4 faults in total and in 6th place.

Roger-Yves Bost (FRA) and the 12-year-old bay stallion Castleforbes Talitha had an early 4 faults after taking an inside turn to the GC Playoffs fence and compounded this with a knock down at the first part of the final double combination putting them on 8.

Constant van Paesschen (BEL) and the stallion Verdi Treize were lucky after a rub at an early fence but looked strong until they tapped the top black plank of the final fence for 4 faults making a team total of 12.

Julien Epaillard (FRA) and Usual Suspect d’Auge decided not to take any risks with inside turns but were still fast despite also suffering the fate of the plank at the final fence for 4 faults.

Marlon Monolo Zanotelli (BRA) riding Kodak van het Indihof started smoothly and despite losing their rhythm to the triple combination they became the latest victims of the tricky final vertical leaving the team on 8.

The GCL series ranking leaders fielded young Harry Charles (GBR) first riding ABC Quantum Cruise. Earlier team manager Helena Stormans spoke of the team’s intense motivation and said the riders were achieving success as they always put the team first. Charles went outside the GC vertical to the triple and stayed clear despite a rub at the final plank.

William Whitaker (GBR) and RMF Cadeau de Muze were not so fortunate and had the front rail of the triple combination down for 4 faults but pushed through to the end keeping the team on 4 in total but in 7th place.

Maestro Ludger Beerbaum (GER) followed on with his trusty 16-year-old Casello in a strategic move to hold on to their strong form after winning the GCL at the previous leg. Ludger piloted Casello to a solid clear in 155.12, but the team were not quick enough to trump the Knights.

Harrie Smolders (NED) and the 11-year-old stallion Une de L’Othain set off steady and determined but came unstuck with their first 4 faults at the GC Prague Playoffs upright and another at the Longines vertical before finishing on an uncharacteristic 12.

It was not to be the team’s day as Nayel Nassar’s (EGY) strong start unravelled at the first part of the double combination at the end of the course with Oaks Redwood having the wrong distance for take off and stumbling on landing. Horse and rider walked out of the arena unharmed but the team were eliminated.

Nicola Philippaerts (BEL) and Katanga vH Dingeshof had a rocky moment at the dramatic blue Brandenburg Gate wall but despite rapping the fence it held. Philippaerts pushed all the buttons and came home clear and impressively in one of the faster times building up a comfortable cushion for his teammate.

Martin Fuchs (SUI) and Chica B Z put in a huge jump over the Prestige oxer early on in the course but settled into a strong rhythm to finish clear under pressure and propelling the Knights into the lead in 152.47.

Gerco Schroder (NED) and the 11-year-old bay Davino Q put in big efforts over the DVAG, GCL and Tennor oxers and was rewarded with an impressive clear albeit slow.

Marco Kutscher (GER) and Charco clocked up 4 faults at the GCL oxer knocking the back rail but he crossed the finish line in a healthily fast time keeping the team up the starting grid in fourth place for tomorrow.

New signing Edward Levy (FRA) joined in the recent mid season transfer window and looked on course for a clear on Drag Du Buisson Z. But the first part of the double combination saw most of the poles tumbling for 4 faults.

Alberto Zorzi (ITA) needed to go clear to keep them up with the leaders and had plenty of forward energy and thrust from Ulane de Coquerie with great riding through the triple combination. But a knock at the GC Prague Playoffs fence put the team on a total of 8.

Dani G Waldman (ISR) on her star chestnut mare Lizziemary cleared the early challenging oxers beautifully and it looked to be a display of poetry in motion until the pair reached too far over the oxer of the double combination picking up faults at the second element.

Clear round machine and team anchor Pieter Devos (BEL) had it all to do but his impressive  chestnut gelding Apart was precise and helped deliver a brilliant clear round putting them in fifth place.

Titouan Schumacher (FRA) and Atome Z worked hard and despite a rub on the back rail of the GCL oxer it held. The combination were tight to the GC Prague Playoffs but Atome Z’s great agility helped them through. As they approached the finish line it was again to be the final part of the double combination that would trigger 4 faults.

Bart Bles (NED) rode a smart round on Israel v. D. Dennehoeve slicing the angle to the GC Prague Playoffs fence giving the horse a great ride with his clear round keeping them on four faults. And as the fastest of all the teams on that score they went into third place.

There was disappointment for Leopold van Asten (NED) riding VDL Groep Miss Untouchable as they took down the back rail of the DVAG oxer and were the latest to hit the black plank of the final part of the double combination for a total of 8.

The strong pairing of Christian Ahlmann (GER) and the home bred 10-year-old Take A Chance on Me Z, sired by the legendary Taloubet Z, delivered an immaculate clear round demonstrating serious elasticity and agility to finish clear but with a team total of 8.

Bassem Mohammed (QAT) riding Gunder opted for a steady speed and went wide to the tricky GC Prague Playoffs vertical. Bassem added a stride to the last combination and pulled of a clear round.

But it was not such a happy day for Mike Kawai (JPN) and Calvin who despite getting away with a couple of knocks over the triple combination ended up with 4 faults at the GCL oxer and another 4 at the first part of the bogey double combination for a total of 8.

Michael G Duffy (IRE) suffered an early 4 faults at the Prestige oxer riding Chappo Chey and managed to clear his way through some tricky moments including the approach to the big DVAG oxer he was also a victim of the final plank for a total of 8 faults.

Maikel van der Vleuten (NED) and Beauville Z, already have a big win on the circuit this season,  but there was a sticky moment drifting after the GCL oxer but van der Vleuten reacted quickly and kept things on track before hitting the back rail of the DVAG oxer for 4 faults leaving the team on a total of 12 and way down the order.

Margie Goldstein-Engle (USA) rode a hugely impressive clear round on the 10-year-old bay gelding Dicas and was determined to put in a great performance despite her mother passing away this week.

Her teammate Karel Cox (BEL) had less pressure after Margie’s stunning clear round, but the middle part of the triple combination fell and Kill Bill Max also touched the back rail of the Tennor oxer for a total of 8 faults for the team and into 11th place.

The final team to jump fielded Pius Schwizer (SUI) and Living The Dream first. The combination put in a feisty round taking no prisoners with an inside turn before the triple. But the approach to the final double was not foot perfect and they clocked up 4 faults.

Could Daniel Deusser (GER) keep the team score at 4 overnight? Piloting his grey mare Jasmien v Bisschop outside to the triple combination smoothly they then had an uncomfortable shift at the white DVAG oxer for 4 leaving the team on a total of 8 and in 9th place overnight.

Tomorrow's GCL R2 will take place at 11.30am local time, tune in via GC TV to watch the action live to see who will be victorious in Berlin.